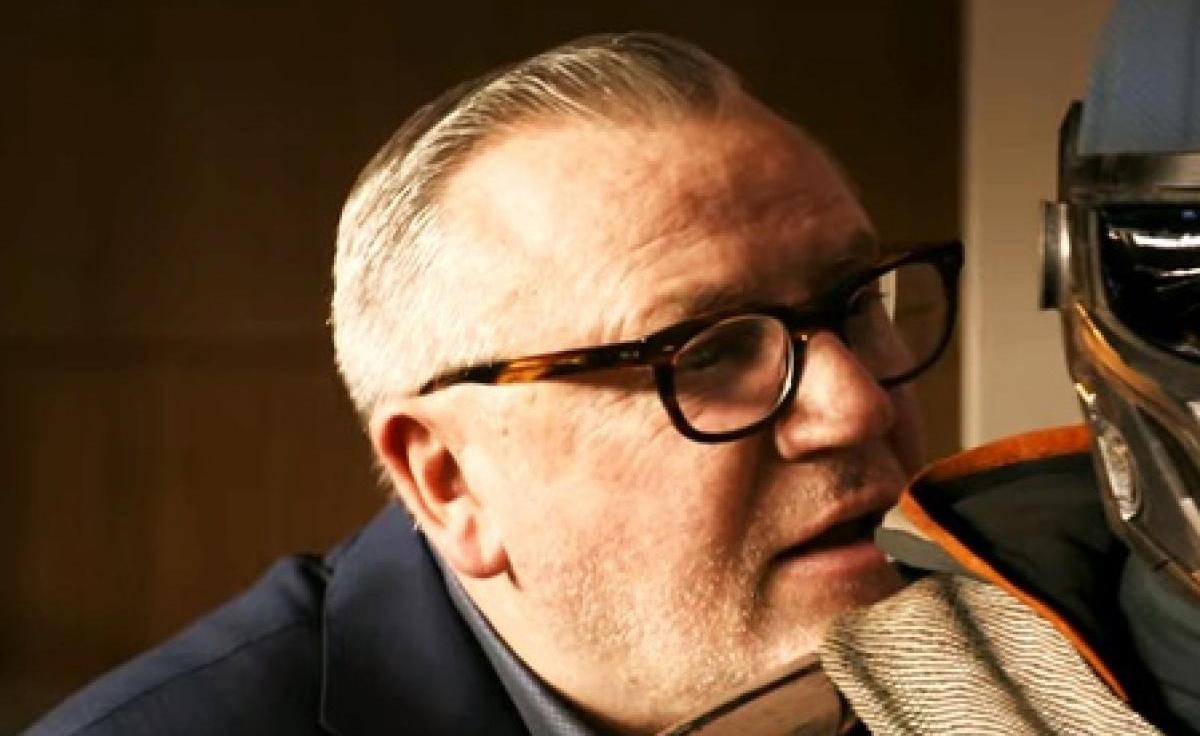 It’s the solitary line spoken by Olga Kurylenko’s Antonia Dreykov, a tragic figure who until the end of Black Widow had been programmed by her father to be a ruthless killing machine. Yes, this is Dreykov’s daughter, a victim of an attack by Natasha Romanoff herself when Antonia was just a child which caused her severe facial scarring. Her father put a chip in her head, we are told, made her cover her face with a mask, and forced her to act as his weapon under the name Taskmaster.

Taskmaster can perfectly mimic anyone’s fighting style. She is virtually unstoppable. And yet there is still one person who strikes dread into her heart—her father.

It’s just a glimpse of how much of a monster Dreykov clearly is. He might not have disintegrated 50 percent of the universe, he might not be an actual Nazi with a skull for a face, or a Goddess destroyer of worlds, but Dreykov is still a bigger bastard—and a very recognizable one at that.

This villain is not an experiment gone wrong, or a damaged character hell bent on revenge; he has no misguided noble ideals, he’s just an utter, utter wanker who treats women and girls as a commodity. Dreykov runs the Widow program as if it was a farm. He takes children from their families when they are very young (Yelena was six – Natasha was even younger). One in 20 survives the training and becomes a Widow. He kills the rest. Given the reveal of how many brainwashed Widows Dreykov has stationed around the world, the body count he must be responsible for is huge. But the ones who survive are hardly better off. We learn through Yelena that these women have no freewill. No meaningful life at all. It’s funny, but it’s also quite heartbreaking how excited Yelena is about buying herself a piece of clothing for the first time.

Dreykov has Harvey Weinstein/Jeffrey Epstein/Donald Trump vibes. He’s an embodiment of toxic masculinity, a violent bully obsessed with power who sees women as property—in fact he describes girls as “the one resource the world has too much of.”

There is nothing to suggest Dreykov is a sexual abuser, but then there’s nothing to suggest he isn’t. What motivates Dreykov is power and he has complete control over these women—hundreds of women. They aren’t people to him. So the limits of his abuse aren’t defined. And the fact that he is able to treat his own daughter so abhorrently would indicate that there aren’t limits at all. He treats women and girls like trash, including his own child.

Dreykov’s Widows are given involuntary hysterectomies—Yelena describes the process to Alexei with cold detail. He violates these women’s bodies and controls their minds, keeping them in a state of waking torture. They are conscious and aware of what they are doing but can’t tell what is them and what is not.

And when Dreykov is confronted by a woman he can’t control, Natasha, then his facade slips. He loses his temper. And his reaction is to punch her in the face. Repeatedly. Nat can take it. It’s all part of her plan. But you know in another life Dreykov would definitely be a domestic abuser.

He is absolutely a villain for our time and there’s nothing cartoonish about him (apart from his accent…). Dreykov is a scummy man, taken to absolute extremes: he is the all powerful scummy man. He is what happens when a man who hates women isn’t stopped. He is a cautionary tale and in the retrospectively chilling opening credit montage, we see him cozying up to world leaders. He can start and end wars, make or break kings, we are told. He is the kind of real world villain that we must be afraid of—Gods and monsters aren’t real, but people like Dreykov are. And it’s fitting that it takes three women (and a super soldier) to bring him down.

Marvel villains don’t always die when they are defeated. Fan favorite Loki who actually did die, now has his own show, while the decision not to allow Zemo to take his own life at the end of Captain America: Civil War was a key moment for T’Challa. But Dreykov had to die. He is irredeemable and his sphere of influence too powerful to take any risks. He might be just an old, human male, but he’s the nastiest piece of work the MCU has ever created.

Black Widow opens in cinemas on July 7 in the UK. It opens in theaters and on Disney+ Premier access on July 9 in the U.S.