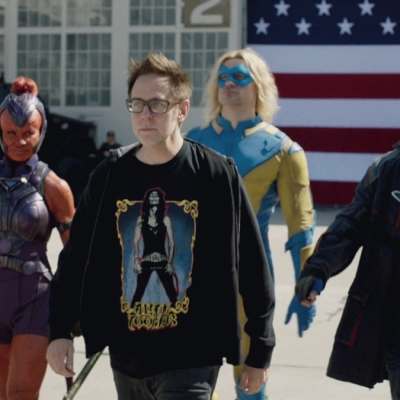 Say what you will about the DC Extended Universe’s inability to match Mighty Marvel’s reliably lucrative talent for cohesive world-building, but the onscreen presence of Margot Robbie’s Harley Quinn has become—justified cliché incoming—iconic in the pop culture panorama from her thus-far two movie appearances. Consequently, Robbie’s return for a third-go-round in franchise-crossing director James Gunn’s The Suicide Squad will be an essential anchor for the sequel showcasing DC Comics’ ensemble of bad seeds. However, as doubts rise about future returns, it seems that the actress was unaware of the fact that her character was killed off—well, in one branch of the continuity.

“Whaaat? I didn’t know that. [Laughs] Thank you for telling me!,” was Margot Robbie’s earnestly surprised reaction when an EW interview led to her learning that her signature character Harley Quinn was, unbeknownst to her, killed off—or, in the very least, revealed to be presumed dead—in a post-apocalyptic epilogue scene from the recently HBO-Max-premiered Zack Snyder’s Justice League. However, those who have been following the divergence in the continuity caused by the so-called Snyder Cut know that Snyder’s lengthy vision is not considered canon in the DCEU, which still acknowledges the 2017 version of Justice League directed by Joss Whedon. Thusly, Harley’s death in this interpretation won’t affect any prospective appearances going forward.

“I guess it’s kind of like the comics,” Robbie muses of her Snyder Cut death revelation. “The film version of the DC universe, I actually think they’re a lot like the comics. You pick up one comic and something’s happening and then you pick up the next comic and maybe that character’s not alive, maybe that character’s not with that person, maybe that character looks completely different. Each movie is its own sort of thing, and I think that works in the comic book world, and I think that works in the DC film world as well. It’s not like Marvel where everything is more obviously linked in a more linear way.”

Robbie points out the DCEU’s more—let’s just say “flexible” approach to its cinematic continuity in comparison to Marvel’s tightly-run storyline ship, although qualifying her observation with the idea that this style works for DC uniquely. Still, the notion of Harley Quin dying in the Snyder Cut can be qualified as throwaway exposition for a scenario—in which Darkseid’s invaders from Apokolips have turned the Earth into a wasteland—that was never destined for permanence. After all, Snyder had initially intended for the Justice League to prevail in the end—albeit by way of an Avengers: Endgame type time-traveling reset of this scenario. Of course, that victory would have been the culmination to what would have become a now-inconceivable trilogy of Justice League films.

Yet, the Snyder Cut’s Harley Quinn scene remains a potently truthful examination of the destructive relationship between Harley and her cackling criminal lover/mentor, the Joker, despite its non-canonical status. The scene in question facilitated the return of Jared Leto’s version of DC’s Clown Prince of Crime, who, of course, was crucial to Harley’s origin and homicidal harlequin gimmick, as featured in Robbie’s debut as the character in director David Ayer’s 2016 effort, Suicide Squad. Yet, in a bleak scenario in which Ben Affleck’s Batman is forced to team up with his arch-nemesis and unrepentant murderer of Robin, a tiff with the Joker—what was surely one of many—sees him reveal that a grievously bleeding Harley Quinn died in his arms during the Apokolitian invasion, requesting a dying wish that Batman eventually kills the Joker slowly. Indeed, while the events and lengthy subtitle of Harley’s second DCEU appearance in Birds of Prey: And the Fantabulous Emancipation of One Harley Quinn made that breakup abundantly clear, the Snyder Cut scene sealed the deal, certifying Harley’s status as an anti-hero.

Nevertheless, in an observation that could be interpreted as throwing shade, Robbie confesses confusion about DC’s array of live-action offerings, which remains represented on film with a solo film for The Flash, along with Wonder Woman and Aquaman sequels and Robert Pattinson-starring Earth Two reboot The Batman still on tap, and on television with the remaining titles from The CWverse, which continue with shows such as The Flash, Stargirl, Batwoman and Superman and Lois and will expand with a Green Lantern Corps series for HBO Max. “It feels like there’s so many adjacent stories, worlds, and films happening at the same time, just like there are in the comics.” Indeed, the very nature of The Suicide Squad further plunges Robbie’s Harley directly to the heart of this phenomenon, since her return for this closely-titled follow-up to Ayer’s Suicide Squad occurs in what is being loosely considered a reboot of that film. Tellingly, Gunn—who tackled the film during a temporary Disney-dealt excommunication from his Marvel Cinematic Universe Guardians of the Galaxy tenure—was given creative carte blanche when it came to the film, potential anachronisms be damned.

“So, yeah, I didn’t know that, but it doesn’t necessarily change what other people are able to do with this universe, I don’t think,” explains Robbie of the franchise’s differing creative visions. “What one director decides I don’t think dictates what another director might be able to pick up and do with the world and the characters, which is fun. I think that’s an appealing aspect for directors in the DC world, they can make it their own, the way James did. He didn’t have to be beholden to the version that David Ayer [director of Suicide Squad] set up. He could pick it up and make it his own, which I’m sure was more appealing for him.”

Ominously enough, Robbie seems to be expressing fatigue about playing Harley Quinn for the DCEU, with The Suicide Squad and last year’s Birds of Prey having been shot so close together. “It was kind of back-to-back filming Birds… and filming this, so I was kind of like, oof, I need a break from Harley because she’s exhausting,” she confesses. “I don’t know when we’re next going to see her. I’m just as intrigued as everyone else is.” In previous versions of the DCEU’s long-term schedule, Robbie was set to headline another all-female team-up of DC characters (joined by Batgirl, Huntress and Poison Ivy), called Gotham City Sirens, but that project remains shelved as the franchise continues to evolve past that permutation.

Regardless, The Suicide Squad will see the return of Margot Robbie’s Harley Quinn, joined by an impressive lineup of conscripted ne’er-do-wells, when it hits its premium-free HBO Max premiere on Friday, August 6.

Doctor Who: Why Is It So Difficult to Replace the Showrunner?
From BTS to Busan—How Marvel is Courting K-Culture
Kill the Justice League: Evil Superman Could Be the Best Video Game Superman
Elden Ring Delay Throws the 2022 Video Game Release Schedule Into Chaos
Why We Can’t Quit I Know What You Did Last Summer