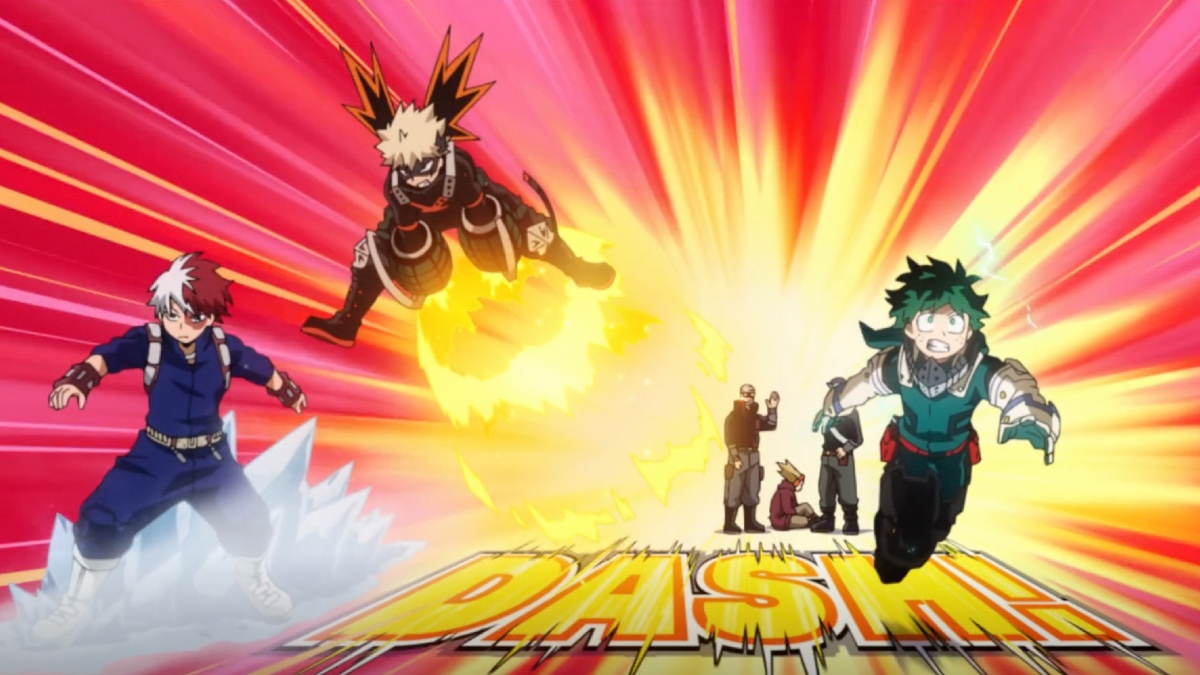 My Hero Academia makes the heroes of its universe its priority, but right from the anime’s earliest moments it’s also been fascinated with the natural conflict and resentment that exists between the heroes and the villains that threaten society. The League of Villains and other malevolent organizations have always lurked in the shadows, so whenever these enemies are absent for a lengthy span of time there’s probable cause to worry that an attack is right around the corner.

The second half of My Hero Academia season 5 appears to be heavily interested in what the villains have been up to while Midoriya and friends mature into more confident humanitarians. “One Thing at a Time” continues to build the foundation for a showdown of epic proportions. Both factions remain isolated and largely oblivious to the full scope of what they’re caught up in, yet tension mounts over which side will be the most prepared.

“One Thing at a Time” revolves around strategy and preparation, which leaves the heroes feeling like they’re in a healthy position to face the unknown. At the same time, there’s such little attention given to the villains that it’s impossible to tell who is truly in the “lead.” The uncertainty that hangs over top heroes like Hawks and Endeavor is actually exciting. They believe that they have a winning plan, but part of the purpose of “One Thing at a Time” is to manipulate the audience’s perception and emphasize just how little everybody knows.

Much like the title of the episode indicates, this is a delicate matter that needs to be carefully approached, lest everything fall apart. The heroes still have a lot to learn, but by the time that this installment ends it at least feels like they’re a little more prepared for the ensuing chaos.

Some of the most exciting material to come out of this episode involves Hawks undercover work with the villains. Each episode blurs the lines a little more as Hawks puts himself in this vulnerable position, all of which helps establish him as one of the season’s biggest MVPs. It’s rare for a character in My Hero Academia to experience such a glow up this quickly, but everything that Hawks does feels like a homerun at this point. He plans to locate all of the heroes that the Meta Liberation Army has already been able to influence through Destro’s text and hopefully get through to them.

The presence of this incendiary Meta Liberation Army literature carries tremendous weight and it’s chilling to see My Hero Academia create parallels with Nazi propaganda and Hitler’s Mein Kampf as an inspirational manifesto for evil. It’s leading to the creation of some very layered villains that the heroes may have a harder time to eliminate.

“One Thing at a Time” repeatedly speaks to Hawks’ utility on this mission, but it also slowly creates anxiety and begins to frame Hawks like a walking target that could become an unexpected casualty at any moment. It’s a smart way to handle this material after the audience learns what side Hawks is really on and the scope of his mission. Hawks isn’t afraid to lean on Tokoyomi for some extra help since birds of a feather need to flock together. Hawks perpetually proves that he’s highly competent, but it’s appreciated that My Hero Academia shows that he still needs some kind of reinforcements to keep tabs on such a large swath of hero students.

Hawks must be subtle in this arena, but Endeavor finally picks up on his code and begins to move into action over what all of this means. Endeavor deduces that the impromptu reinstatement of the hero agency work studies is actually to better prepare the heroes for the attack that’s about to come, yet in a way that doesn’t tip their hat or frighten hundreds of impressionable heroes-in-the-making. It’s a form of insurance in case Hawks and the other Pro Heroes fail to get the job done.

”One Thing at a Time” is a very exposition heavy installment and the majority of it is spent with characters lost in panic over what they will do in the future, rather than acting in the moment. This still produces compelling material since the stakes are so high and it genuinely feels like a change of the guard is on its way after some serious loss occurs. Midoriya and company still have a lot to learn, but they’ve become progressively impressive to the point that sometimes their moments of naiveté ring false.

It’d make for a fascinating change of pace if the Hero Association faces real tragedy and has no course of retaliation other than to embrace the next generation of heroes, who have hopefully experienced enough trials by fire to pick up the slack. This also reinforces the tough love approach that Endeavor continues to spit at Midoriya and Bakugo, as if he knows that it will leave them better prepared for the lawless society that might be in-the-making.

Endeavor is more hands-on with his approach on how to handle this growing problem. He hammers in how rescue, evacuation, and fighting are the three core tenets to heroics, which he tries to reinforce in his new pupils through “parallel processing” where these three maneuvers coalesce into one priority. Izuku, Katsuki, and Shoto are tasked to synthesize these skills and apprehend a villain before Endeavor can, which is a fun challenge, but plays out in a fairly predictable manner.

Endeavor succeeds, but his new 1-A protégés study his moves and learn how to apply them to their own Quirks in comparable ways that make them better fighters. It remains highly fulfilling to have this trio of characters work together as a unit and it feels like the perfect warm up for what’s to come in the upcoming My Hero Academia movie. An awkward romance also needs to immediately bloom between Bakugo and Pro Hero, Burnin.

The second half of “One Thing at a Time” feels slightly regressive due to how it spends a considerable amount of time getting Endeavor caught up to speed on Deku and Katsuki’s accomplishments and Quirk specifics, all of which the audience already knows by heart. There’s still some fun to be had with this refresher, like Deku’s endless ramble about his Quirk and the precise analytical details behind it all. It’s a perfect character moment. Midoriya’s Quirk may technically be One For All, and now Black Whip, but it often feels like “Nerdy Ramble” is the hero’s true special power.

No one prompts Shoto to go through the same level of introspection as Midoriya and Bakugo, but it’s helpful to get a little more context for his recent actions. Shoto hasn’t fully forgiven Endeavor for his past and even though he’s comfortably able to train under him, it’s also made clear that Shoto is taking advantage of his father to some extent by learning lessons from him. He compartmentalizes this progress so that it’s not mistaken for genuine kindness or understanding.

Shoto’s time with his father at his hero agency is merely a means to an end as he works to improve his skills, arguably to become more like All Might, not Endeavor. It’s likely that Shoto’s icy resolve will slowly thaw through the Flashfire of Endeavor’s affection. This should amount to rewarding material for Shoto, regardless of the direction that his emotions pull him.

“One Thing at a Time” is a satisfying My Hero Academia installment that emphasizes personal growth and teamwork during a time where it’s never been more important. The steps that the anime is taking forward may currently feel miniscule, but they should mean more once the villains’ side of this story gets properly explored. The endless optimism that heroes trade in helps Midoriya, Bakugo, and Shoto find their footing at Endeavor’s Agency, but it’s going to take a lot more parallel processing to take on an army of entitled villains.

Blue Beetle Movie Concept Art Reveals DCEU Legacy Connection
Night Teeth: Megan Fox and Sydney Sweeney Should Lead Their Own Vampire Movie
“Change of Plans” | Marvel Studios’ Hawkeye | Disney+
Link Tank: Where You Can Watch Dune (and All the Other Versions) This Week
Halloween Movies Ranked from Worst to Best