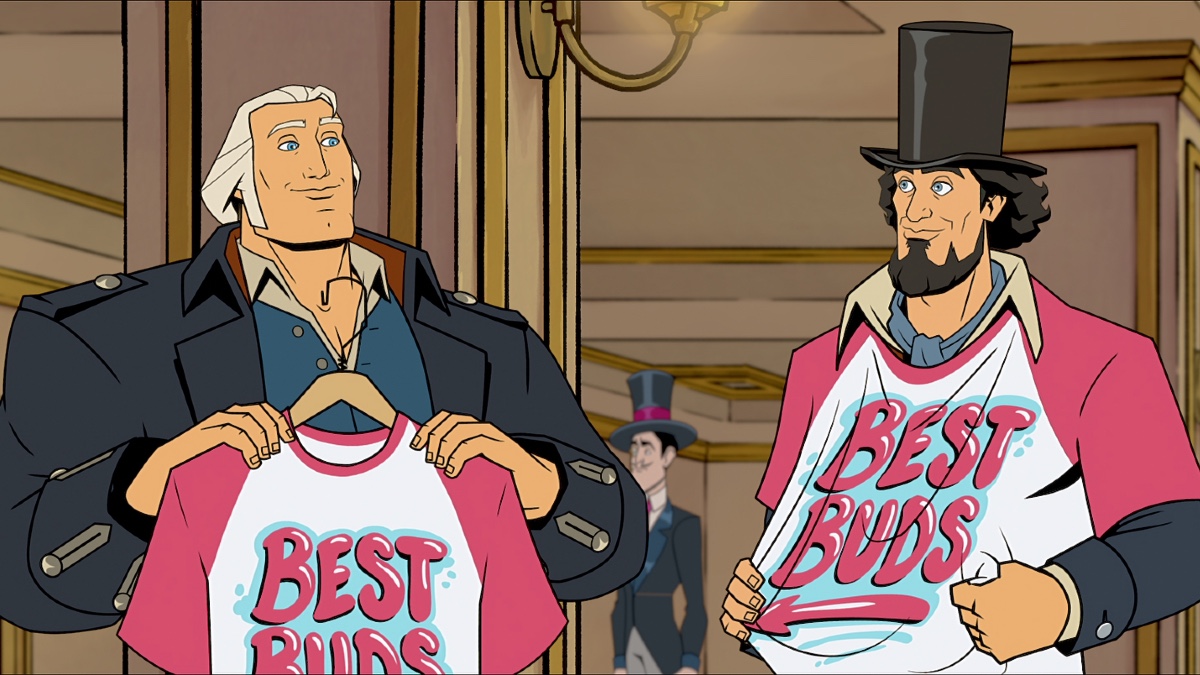 This article contains light spoilers for America: The Motion Picture.

Director Matt Thompson has been in the adult animated comedy game for a long time. Thompson was around for the dawn of Adult Swim in 2001 when the programming block hosted Sealab 2021, the series he created alongside frequent collaborator Adam Reed. Reed and Thompson would go on to produce several other animated classics including Frisky Dingo and Archer (which is set to premiere its 12th season later this year).

Still, when it came time to direct his first feature animated film, Netflix’s America: The Motion Picture, the seasoned vet realized that movies are a unique beast.

“(With films) you get a lot more time to sit and try to make things funnier, to make more jokes,” Thompson says. “When you’re on a very tight deadline of episodic television, you kind of have to kick stuff out and move forward.”

The end goal was to present a version of the country’s founding that could have sprung from its, let’s say, underfunded public education system. Who was Sam Adams (Jason Mantzoukas) again? We know he had something to do with beer. Why did Washington cross the Delaware? Was it to get to the other side? No, that can’t be right.

“There are all these little things that are ‘correct adjacent’,” Thompson says.

We spoke with Thompson about America: The Motion Picture’s many anachronisms and what it meant to say goodbye to an old friend on Archer.

Den of Geek: I’m not necessarily the most learned student of American or British history. But was there a reason you went with “King James” as opposed to King George III?

Matt Thompson: Yes, very much so. The writer of the movie, Dave Callahan, had one rule: no research. Because that’s what America is. We’re all undereducated. And we don’t even know enough about our own country. I guarantee you that the lion’s share of people who watch this film will not question that fact. King James is kind of in the lexicon already because of LeBron James. You also don’t want King George to fight George (Washington), which is a little bit confusing on its face. What do you think is the amount of people that are going to catch that?

I don’t know. I probably wouldn’t have caught it if it weren’t for Hamilton.

Yes, agreed. But it was definitely King George. Another thing is, in (real) American history before George Washington gave up the mantle of president, there was a lot of concern with the original colonies that he would declare himself king. There’s a scene in the movie where George meets Samuel Adams, the inventor of beer, and he introduces himself as the future King of America. That is a little small nod to people’s concerns at the time for George Washington.

That was a weird thing for me to be pedantic about, because you just mentioned Sam Adams is the inventor of beer in this.

You are right there. There are all these little things that are “correct adjacent” like Sam Adams, the inventor of beer, you can extrapolate there. The opening scene in Ford’s theater – Lincoln does die there, it’s just that his throat is bitten off by a werewolf instead of a bullet from an assassin. That same assassin is actually John Wilkes Merch Booth, who is running the merchandising booth at the play that they’re attending as a small nod.

You mentioned Abraham Lincoln. While he doesn’t have a very prominent part, what was it like to get Will Forte back in his iconic Clone High role?

That’s another great thing working with (Phil) Lord and (Christopher) Miller, right? Like “hey, you think you can get Will Forte as Lincoln?” I’ve never worked with Will before but he came in and man, he just crushed that. We actually added that dream scene later on because we wanted to see Lincoln again. Will has played Lincoln for Lord and Miller I think three or four times now. He’s also Lincoln in one of the Lego movies.

That’s amazing. I can’t wait for Lincoln in a Spider-Verse movie.

That would be awesome. The whole cast was amazing. Every single one of the cast just brought something unique and different to their roles. I’ve been doing this job of casting comedic roles for 20 years now and I haven’t seen anybody create as much comedy on their feet as Jason Mantzoukas. The guy is just a torrent of comedy. It’s amazing to watch somebody like that.

Somebody in the cast who stood out to me in particular was Andy Samberg. He really goes for it as werewolf Benedict Arnold. What was it like to take in that performance? Were your notes always “bigger, bigger, bigger?”

Andy came in with an idea of how he wanted him to sound and he did it perfectly from take one. It was amazing to see somebody do it exactly like you had in your head without actually even asking about it. When people see the movie, a lot of them don’t realize that that’s Andy, because he put it on so well. When you’re directing people who are able to create comedy at such a high level, you kind of just try to hold onto your chair and keep up with them and rewrite as you go. The most fun part of this job, not just for this movie but for everything I do, is sitting with the world’s funniest people and hearing what comes out of their mouth.

I want to ask about the last scene, where characters address America’s original sins in rapid-fire succession, because it seems like it ties the whole thing together. Did you feel like the ending was crucial to the movie?

The ending was extremely important to me and the whole movie is building up to it in a way. To some degree we wanted to make sure that we’re at least attempting to hold everybody accountable and to hold ourselves accountable for all the different problems that we have right now. To do that over the course of the previous 85 minutes, I felt it would grind the story to a halt comedically. I wanted to keep us moving: quick pace, jokes, gags, having fun, turning the brain off, and just enjoying a beer while watching a movie. But that scene is extremely important to the point of the whole movie and the small amount to which we are trying to to hold us accountable for our past.

What did you learn from directing your first feature film? How was it different from your usual experience?

It’s extremely different and I was not under the impression that it would be. I’ve been making adult comedy cartoons for 20 years. I started with the original Adult Swim, the very first year that Adult Swim was on. I’ve been doing this form of this adult cartoon comedy for a long time. And making a movie is incredibly different than making a 15-minute or a 22 or 30-minute show. (With films) you get a lot more time to sit and try to make things funnier, to make more jokes. When you’re on a very tight deadline of episodic television, you kind of have to kick stuff out and move forward.

With this process, I got to record with all these wonderful, extremely funny people, multiple, multiple, multiple times, and keep reworking the script because we’ve been in the process of making this movie for three years. As opposed to an episode of television, I usually kick that out in three months. Just having that ability of time was one thing. Secondarily, I’ve learned a ton from Lord and Miller. They’re very adamant about characters having heart and relatability and making it so that you want to root for them. If you’re going to invest 90 minutes in something, you better come out thinking that was time well-spent.

Finally, how are things going on Archer season 12?

It’s going great. We’re still all at home working from the pandemic; we have not come back to the office yet. It’s been a logistical challenge but luckily everybody’s working safely, and gainfully employed. We’re extremely thankful for that. The biggest challenge for this season of Archer is just how we are dealing with the character of Malory and Jessica Walter’s passing.

I’m so sorry for your loss. She was an absolute titan.

I’m so sorry for all of our losses. She was a true original, an amazing person. I’m actually starting to tear up just thinking about her. I miss her dearly every day.

America: The Motion Picture is available to stream on Netflix now. Archer season 12 will premiere Wednesday, August 25 at 10 p.m. ET on FXX.