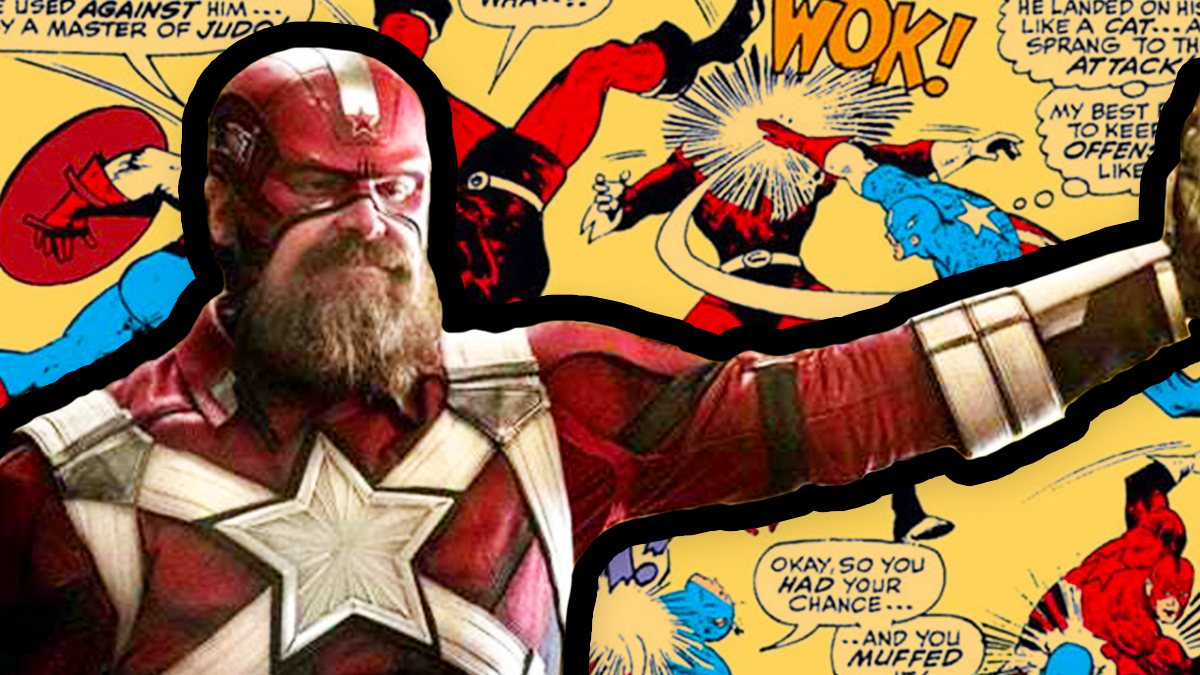 When we finally catch up with Alexei Shostakov (David Harbour) in the Russian prison where he’s been idling for years, he’s reliving his glory days in the midst of dealing with a string of arm wrestling contenders. Marvel’s Black Widow has already shown us just how strong Alexei is during its long, Ohio-set opening, so we know that the man who was once Russia’s answer to Captain America is going to win every single one of these bouts.

As Red Guardian, Alexei even had his own action figure, and although he’s now pretty out of shape the super soldier is more than a match for any of the younger and more ripped inmates who hope to challenge him. While a collection of men excitedly watch Alexei peacock his strength, he even brags about the time he beat Captain America.

“So,” Alexei teases. “I have the nuclear code, but there he is. Captain America! Finally, the Red Guardian’s time has come. I grab hold of his shield and, face to face, it’s a test of strength. The shield that he carries with him like a precious baby blanket? I use it to my advantage. I take it, I push him out the window, I make my escape.”

The beefy inmate he’s currently grappling with calls bullshit on the tall tale by getting Alexei to date his face-off with Cap at around 1983 or 1984 – a time when Steve Rogers was still in the ice.

“Are you calling me a liar?” Alexei rages, snapping the poor man’s wrist until it’s as floppy as a glove. Yikes.

But, hey, he’s just annoyed about being called out. There’s no way Cap and Red Guardian battled in the ’80s, right? It’s just not possible. Well, probably not. Unless you start thinking too hard about the events of Avengers: Endgame, the different ways that the writers and directors of the blockbuster view Steve Rogers’ fate, and the appalling way America treated Cap’s legacy, as revealed in The Falcon and the Winter Soldier.

Let’s look at the possibilities…

A fascinating but deeply upsetting thing we learned in The Falcon and the Winter Soldier was that Steve Rogers wasn’t the only super soldier fighting for America.

In the 1950s, Isaiah Bradley was one of many unwilling human subjects that the United States military tested their super soldier serum on, and as far as we know the only one who made it through those trials. During the Korean War, Isaiah fought Bucky Barnes when he was locked in Winter Soldier mode, and managed to destroy half of his metal arm in the heat of battle. The government started to worry about news of an African-American super soldier going public, and imprisoned Isaiah for three decades. He was freed in the 1980s and his death was later faked so he could live a normal life.

We’re pretty sure Alexei could tell the difference between Steve and Isaiah, but we guess it’s possible that the US military could have had other super soldiers posing as Cap between the period when Isaiah was active and Steve made his return from the ice. For example, in the comics, there were several men who stood in for Steve after Cap had been frozen, because the government didn’t want the world to know that Captain America was gone. One in particular, William Burnside, even went so far as to get plastic surgery to resemble Rogers and really took the whole thing too far (it didn’t end well, but that’s another story). Could Alexei’s tall tale be the first way the MCU nods to replacement Captain Americas beyond Isaiah Bradley?

It’s pretty unlikely that Alexei fought anyone other than MCU Steve Rogers, though. He knows that Steve Rogers is Captain America. Hell, everyone does! Rogers is a “war criminal” on the run in Black Widow, which is set between Captain America: Civil War and Avengers: Infinity War, and he wouldn’t ask Natasha if Cap had mentioned him otherwise, so we should probably assume that when Alexei is talking about his bouts with Cap he means Steve and only Steve.

In the months following Avengers: Endgame’s release, the film’s directors and writers held court on the details of Steve Rogers’ mission to return the Infinity Stones and the long life that he subsequently chose to live with his WWII sweetheart, Peggy Carter. As you may recall, after Steve finished popping the stones back to their rightful places to avoid any of the chaotic branch timelines that The Ancient One warned Bruce Banner about, Steve and Peggy grew old together, and Old Cap then re-emerged on the very day he’d first left to pass his iconic shield over to Sam Wilson – an incident followed up in Marvel’s The Falcon and the Winter Soldier.

But fans weren’t entirely sure whether the life Steve and Peggy lived would have caused its own branch timeline, a matter that directing team Joe and Anthony Russo were happy to clear up.

A branch timeline, guys? Really? Loki, Mobius and everyone else at the TVA want a word.

Avengers: Endgame writers Christopher Markus and Stephen McFeely had a totally different view of how Steve managed to show up where he did at the end of the film – he never left.

“That is our theory,” explained Markus. “We are not experts on time travel, but the Ancient One specifically states that when you take an Infinity Stone out of a timeline it creates a new timeline. So Steve going back and just being there would not create a new timeline. So I reject the “Steve is in an alternate reality” theory. I do believe that there is simply a period in world history from about ’48 to now where there are two Steve Rogers. And anyway, for a large chunk of that one of them is frozen in ice. So it’s not like they’d be running into each other.”

Yes, according to Markus and McFeely, there were two versions of Steve Rogers around in the seven decades that followed Captain America: The First Avenger, and the older version was just off living his life with Peggy while the younger one was in the ice. The confusion was palpable, with many fans refusing to believe that Steve would have hidden in the shadows instead of deciding to do something about all the horrible things that may have been happening in history’s relentless geopolitical conflicts.

The time travel rules of Avengers: Endgame – arguably nonsense – don’t leave much room for Markus and McFeely to be right – Banner tells the team that they can’t change the past because the past will become their future. But Markus and McFeely later doubled down on their comments, claiming that Old Cap was even at Peggy’s funeral during Civil War.

“I would like to believe that through some sort of bullshit time loop paradox–throw in the words you use when you’re bullshitting science in a movie: ‘some sort of quantum paradox’–that there are indeed two Captain Americas in the MCU timeline. That Steve Rogers who looped back into time has therefore always been there, and that he is living somewhere else in the movies you’re watching….And what I really like to believe is that there’s an old man sitting in back at Peggy’s funeral in Civil War, and that’s old Steve Rogers, watching young Steve Rogers, carry old Steve Rogers’s wife up to the front of the church. Can I explain it scientifically? Not really, no.”

Weirdly, it’s Black Widow’s throwaway moments with Alexei that could support the writers’ take here. Maybe the Steve who was with Peggy didn’t stay out of the fight all those years. Maybe he did try to stop Red Guardian from stealing the nuclear codes. And maybe this wasn’t the only time he and Alexei came to blows during the Cold War era. Sure, Cap would have technically been in his ’60s, but he ages slowly and Alexei is proof that the super soldier serum still very much has a kick to it as the years fly by.

Straight Up Lying For Clout

Alexei could have fictionalized his interactions with Captain America for clout, and he comes across as the kind of person who would do so, but let’s look at the second time he brings up Captain America with his “daughter” Natasha Romanoff aka Black Widow. He couldn’t be any more proud that she became an Avenger, even if she defected to fight for the other side. Instead of reconnecting with her properly, however, the first thing he talks to her about privately is in the interest of boosting his own ego.

“Natasha come here, I want to ask you something, its important,” Alexei insists. “Did he talk to you about me? You know, trading war stories.”

“Captain America! My great adversary in this theater of geopolitical conflict. Not so much a nemesis, more like a contemporary, co-equal. I always thought there was a great deal of mutual respect,” he says genuinely.

Natasha doesn’t confirm or deny that Red Guardian got a mention in her conversations with Steve. She’s too annoyed that Alexei is harping on about himself again after they’ve spent so many years apart, but it may leave a tantalizing Captain America mystery lingering on the MCU timeline. Why would Alexei take an obvious lie this far, to someone with first-hand knowledge who would absolutely be in a position to call him out on it if he didn’t at least believe it was true?

For what it’s worth, Harbour told Inverse that Red Guardian’s Cap stories are “absolutely true, 100 percent,” but also went on to add “There’s a thing, confabulation, where people actually just believe their lies to such a degree that even when confronted with reality, they can’t process it. It doesn’t make sense [to them]. I think Alexei is very much the same way. He lives this reality completely independent of what other people have seen or heard.”

Whether any of this is ever canonically confirmed or not, the MCU is known for its breadcrumbs and callbacks, so don’t count out more Cap vs. Red Guardian hints just yet.