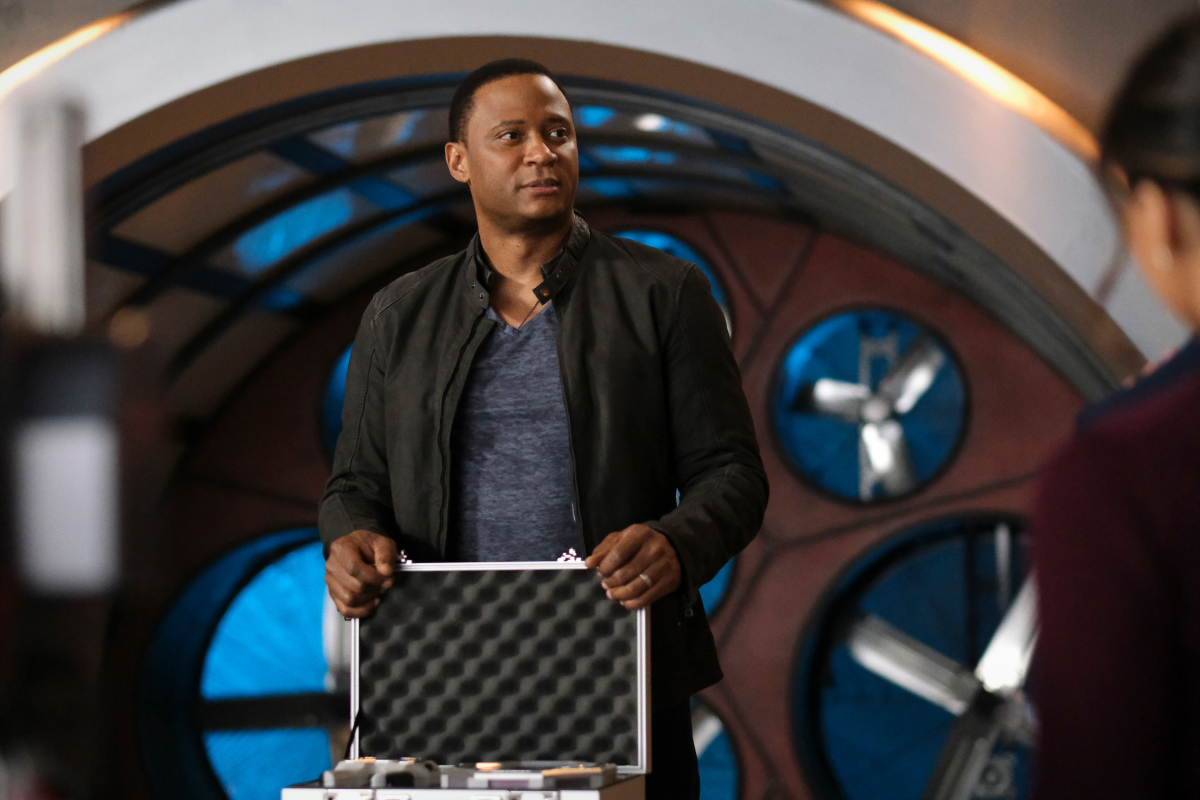 The following THE FLASH article contains spoilers through Season 7, Episode 16.

The War of the Godspeeds continues on The Flash, but Barry and friends get a boost from an old friend: David Ramsey’s John Diggle. And the arrival of the former Arrow star could not have come at a more opportune moment, as his preexisting friendship with Barry – and his general stand-in for Oliver Queen-status – manages to infuse this largely confusing story with something that genuinely feels like emotional stakes at last.

Plus, maybe I just miss Arrow more than most people are willing to admit, but it’s just so good to see Diggle again in a significant capacity. (Ramsay’s recent Legends of Tomorrow stint as Bass Reeves was entertaining, but it’s not quite the same thing.) That his appearance seems to be hinting at finally dealing with his cosmic destiny as the Green Lantern is just the icing on the cake.

Technically, Diggle’s arrival in “P.O.W” is about bringing Team Flash some Cisco-crafted tech meant to help fight the Godspeeds, but mostly he seems to be about providing a burst of sanity in a story that’s rapidly becoming the sort of messy that’s hard to even explain to someone who has never seen the show before. If Barry can’t have these sorts of heart-to-hearts with Oliver anymore, then Diggle is the next best thing, and their emotional conversation about Barry’s fears for the future and his worries over the existence of his family is wonderfully done.

It would be really great if The Flash allowed Barry to have more of these sorts of talks – the ones that remind us he’s as human as anyone else despite his superhero status, with all the fears and anxieties that come along with it. Once upon a time he and Caitlin used to be the sort of best friends who could discuss these sorts of issues, which would at least give her a valuable role to play on a show that’s found Frost to be the shinier and more entertaining of Danielle Panabaker’s dual roles of late. Mostly I’d just like to feel that Team Flash was a real team again, instead of Barry, Iris, Caitlin, and a rotating cast of characters that someone finds a reason to yell at or lecture. (Sorry, Chester, you drew the short straw this week.)

Granted, there’s more than a little bit of irony about John encouraging his friend to risk the timeline (yet again!) to make sure Nora’s okay when we all know that Barry’s the reason the Diggle family was completely altered following Flashpoint. Maybe we’re supposed to take it as an example of Dig’s growth or grace in the wake of fatherhood, but mostly it just seems like another excuse for The Flash to play fast and loose with its already barely existent internal rules of time travel.

Outside of Diggle’s very welcome visit, much of this episode feels like table-setting for the two-part finale that kicks off next week, as we’re given a vague motivation for the Godspeeds behavior that involves battling over an amnesiac version of original evil (God)speedster August Heart; Nora and Bart arrive from the future, proving that the timeline of Barry’s family is still intact if slightly expanded; and we learn that Iris hasn’t been offscreen just to give Candace Patton a break but because she’s been phasing through various temporal planes because…reasons.

What exactly that means is anyone’s guess – though I’m assuming this is in fact some sort of pregnancy confirmation and the reason Iris is so unstable is because the number of her future children keeps changing depending on whatever’s going on with the timeline. Whether that’s actually the case or not, after a season in which Iris spent the bulk of it trapped in a mirror dimension with little to do, it seems extra cruel that The Flash has essentially decided to trap her in a different alternate dimension for the final arc of this one.

I know I can’t be the only person who actually groaned aloud when Deon appeared and somehow his Still Force abilities make even less sense now than they did a half dozen episodes ago. But mostly it’s just the concept that Iris is once again stuck in some situation that requires Team Flash to figure out how to save her – this is not the arc I wanted for her this year, is all I’m saying.

Unfortunately, the largely inexplicable but at least mostly messy fun of the Godspeed plot is almost completely derailed every time The Flash turns its attention back to the equally terrible Kristen Kramer and Esperanza subplots, which both seem to exist for little reason than because someone somewhere promised Jesse L. Martin and Kayla Compton something to do in the season’s final set of episodes. Don’t get me wrong, Allegra has really grown on me this season and I will stan for Joe West forever, but these two stories could not possibly feel more out of place in the larger arc of Season 7 right now.

I suppose someone could argue that Allegra’s learning her own valuable if cruel lesson about family, but after wasting so much screentime on Caitlin fixing Allegra’s voice, it feels especially pointless to end it all with Esperanza’s death. (Though, since most people don’t turn into glittering gold powder when they die, I think it’s safe to assume we somehow haven’t seen the last of her.)

The worst offender of the hour – of the season, possibly, which is saying something – is the ridiculously terrible Kristen Kramer plot, which sees her and Joe literally being hunted through the woods by her former childhood friend turned possibly immortal mercenary. Truly, y’all, what did we do to deserve this?

“P.O.W.”, like “Enemy at the Gates” before it is one of those episodes whose stock will exponentially go up if the final two episodes of Season 7 manage to coalesce into a decent story. If the Godspeed plot turns out to be as cool as we all desperately want it to, if Nora and Bart’s arrival and the series’ 150th episode nail all the emotional beats that make our hearts grow three sizes, this will suddenly become an hour that we remember fondly for being part of it all. If they don’t…well, it’s not like we haven’t had to live with disappointment this season already. Fingers crossed for the former.

Metroid Dread Could Break the Franchise Sales Curse With No Compromises
“In The Beginning” Featurette | Marvel Studios’ Eternals
The Last of Us HBO Series Set Footage Reveals Best Look at Ellie, Joel, and Tess in Boston QZ
Doctor Who’s Scariest Episodes: One Fan’s Horror Highlights
Star Trek Just Made This Deep-Cut TNG Character Into a Captain