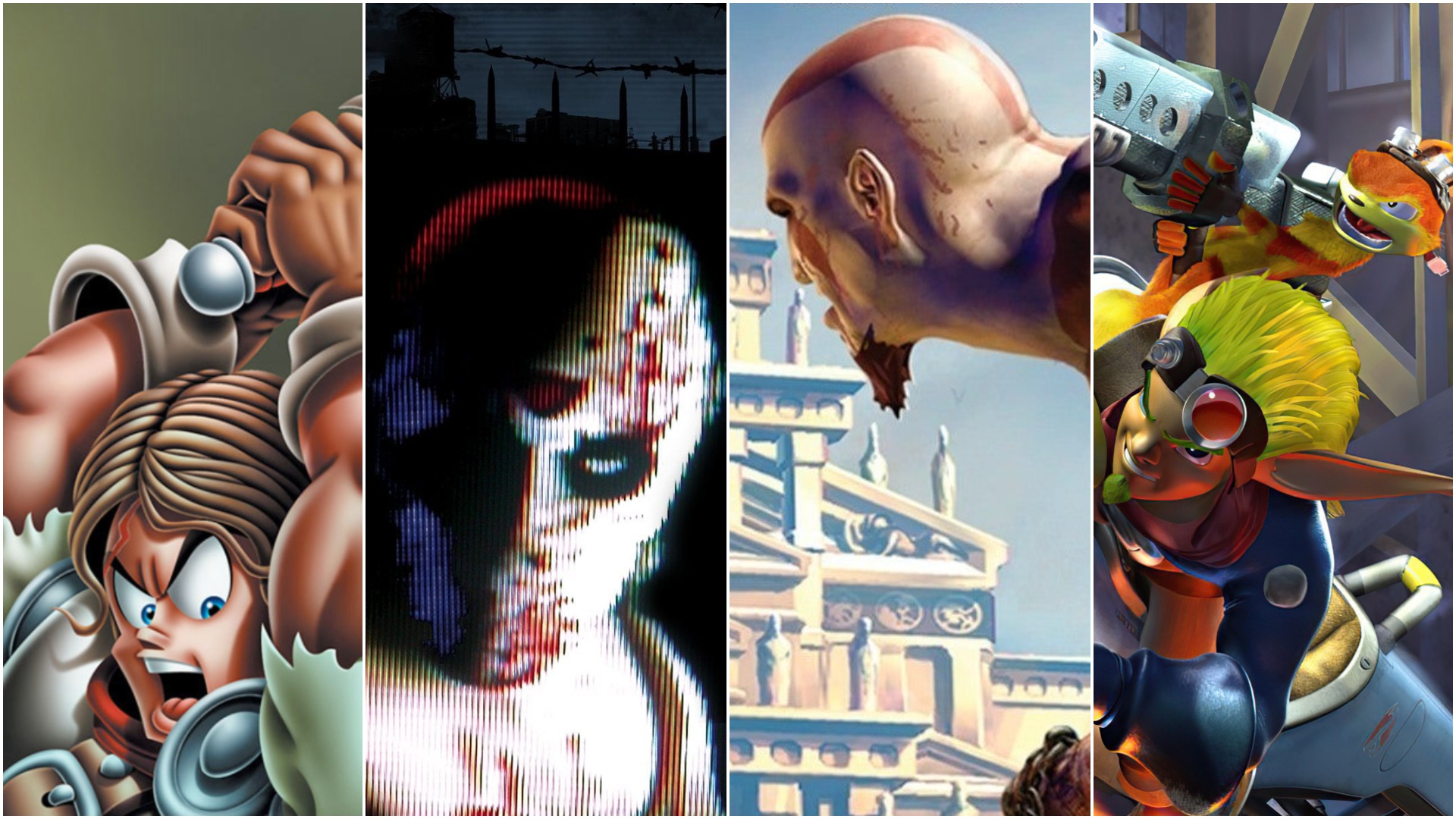 Over 155 million PlayStation 2s have been sold to date, but few of those 150+ million PS2 owners have ever come close to beating the beloved console’s hardest games.

Sure, the PS2 may have helped make 3D games significantly more “playable,” and yes, it did slowly pull us away from the era of absurdly difficult arcade-style games, but it was also the console that seemingly inspired a new generation of developers to ask “What does the future of incredibly difficult games look like?”

Their answers include a driving game where mistakes are not an option, a rhythm game harder than actually learning an instrument, a beat-em-up that beats you up, and more of the absolute hardest PS2 games ever made.

Stuntman rides that line between “broken” and “designed to be difficult,” but I feel like this unique driving game is still playable enough to be rightfully recognized as one of the PS2’s most difficult experiences.

Stuntman is defined by the kind of razor-thin margin of error you typically don’t see outside of the toughest bullet hell shooters. This is an already mechanically challenging driving game made worse by the fact you only have a couple of seconds to react to frustratingly vague on-set stunt requests. It forces you to embrace that brand of trial and error gameplay that would be impossible to endorse if the novelty of playing as a movie stuntman wasn’t so appealing.

Manhunt is a grindhouse classic that deserves more love than it typically receives, but like so many stealth titles of this era, it’s also a maddeningly frustrating game that may have chased off more than a few potential fans with its unforgiving gameplay.

While you’re technically allowed to make a mistake in Manhunt, most players will find that the odds of recovering from those mistakes are so low that you might as well hit reset the moment that you’re caught. Oh, and this game’s “Hardcore” difficulty mode is even more brutal than the fictional snuff movie you’re supposedly participating in.

There are two kinds of people in this world. Those who see Pac-Man World 2 on a list of hard games and think “What?” and those who hear the name Pac-Man World 2 and immediately unlock a treasure trove of painful memories.

Some of Pac-Man World 2’s levels are pretty challenging in their own right, but only those who have tried to 100% this game know how hard it really is. While I’ve since seen people beat this game’s toughest time trials, there was a point in my life when I was ready to believe they were actually impossible. If this was a Crash Bandicoot game, it’d arguably be the hardest Crash Bandicoot game ever.

While not the most difficult 3D action game of the PS2 era (we’ll talk about those games in a second), it’s sometimes easy to forget just how hard the original God of War really was.

God of War’s combat is more than enough to keep you on your toes, but what puts this one over the top is the section where you have to climb a rotating tower of spikes and blades in order to escape the afterlife. This section belongs in the Hall of Fame of frustratingly difficult platforming challenges in non-platforming games.

Airblade was unfairly dismissed as a Tony Hawk knockoff at the time of its release, but this game actually had quite a few things going for it that helped it stand apart. Having said that, Airblade could have been a significantly less difficult game if developer Criterion Software had only borrowed some of THPS’ better ideas.

The biggest offenders here are Airblade’s time limits and the structure of its challenges. Like classic THPS games, Airblade tasks you with completing a number of objectives in every level within a certain time limit. Unlike THPS, Airblade makes you complete all of those objectives in one perfect run before the time limit expires. Even “good” gamers will have a hard time overcoming the mental exhaustion of repeating the same challenges over and over.

The Breath of Fire games tend to be pretty challenging, but even this series’ biggest fans will usually concede that Dragon Quarter abuses whatever privileges the franchise may otherwise enjoy in that department.

Dragon Quarter’s early challenges are tough enough for those who go into this game with some understanding of how it all works, but the fact that most people are expected to overcome them while learning this game’s unique (and complicated) mechanics is just too much. Some of the game’s later boss fights even have a way of making you feel like you still don’t understand what you’re doing even when you’re a lowly level one character all over again.

While Guitar Hero 3 deserves a little love for the absurd difficulty of its final song tier (not to mention the infamous “Through the Fire and Flames”), the PS2’s hardest rhythm game will always be Gitaroo Man.

Most of Gitaroo Man offers relatively reasonable challenges for dedicated rhythm gamers, but this game’s Master Mode challenges are just shy of physically impossible. Actually, “physical” is a great way to describe this game’s difficulty, as anyone who isn’t able to endure quite a bit of hand pain will probably never be able to 100% this one.

While Jak 2 is a fairly difficult game all the way through, I’d say about 80% of this Naughty Dog classic is actually fairly well-balanced and should be accessible to action-adventure/platformer fans of various skill levels.

As you probably figured out, it’s the other 20% of the game that earns Jak 2 its reputation as well as a spot on this list. There’s a handful of difficulty spikes in this game that will leave you wondering whether you’ve done something wrong or somehow accidentally changed a setting. It certainly doesn’t help that this game’s checkpoint system often forces you to replay some of those sections over and over again.

Black is another one of those games that’s hard to rank in terms of difficulty due to the extreme differences between its various difficulty settings. If you’re a somewhat seasoned FPS gamer playing Black on “Easy” or “Normal,” you’ll probably find that this game doesn’t offer many challenges that you aren’t able to overcome through the usual amount of persistence.

Black is an entirely different beast on “Hard” and “Black Ops” settings, though. It’s bad enough that you can be killed by a gentle breeze in those modes, but the fact you’re asked to complete additional objectives while navigating a buffet of bullets is downright cruel.

There’s never really been another action game quite like Godhand. This bizarre beat-em-up combines elements of 3D action games like Devil May Cry with classic arcade brawlers, but emphasizes learning the patterns of individual enemies rather than mowing down waves of foes. To make things worse, the game features a twist on the old “tank control” system that forces you to adapt to a much slower pace than you’re typically used to seeing in these kinds of games.

Put it all together, and you’ve got a game that is constantly forcing you to learn new tricks just to survive. If you’re not the kind of gamer than can pull off complicated fighting game combos in the heat of battle, you might not be able to survive this truly unique action game.

“Difficult” is obviously the first word that comes to mind when I think of FromSoftware games, but the second would have to be “balanced.” For a studio that is obviously pretty well known for making hard games, most FromSoftware titles are actually surprisingly well-balanced.

Then there’s Armored Core: Last Raven. While I have to give FromSoftware credit for making an Armored Core game that challenged even the series’ most dedicated fans, the way this game essentially forces you to master even the most seemingly minor mechanics all but ensures that only those with the right combination of patience and skills will be able to even make progress in it much less dream of beating it.

Saying that a Contra game is hard is just about the hottest take this side of “water is wet,” so the more interesting conversation regarding this series has instead always been “What is the hardest Contra game ever?”

Well, I’d still have to give that honor to Contra: Hard Corps, but Shattered Soldier absolutely belongs in that conversation. This is a pure arcade-style shooter that throws in just enough modern (or somewhat modern) gameplay twists to ensure that even those who consider themselves skilled at retro Contra games will struggle to see the end of one of the PS2’s best action titles.

After establishing the franchise formula in the first Devil May Cry and suffering through a significant sophomore slump in Devil May Cry 2, Capcom decided to get crazy with it and make Devil May Cry 3 arguably the most difficult 3D action game ever.

While it’s true that the original North American release of this game is technically the hardest version (due to the fact that Capcom raised the difficulty of every optional setting before reverting that decision in subsequent re-releases), it really doesn’t matter which version of this game you play. This is an absolute masterpiece in difficult game design, and I love the Devil May Cry team for everything that it is just as I kind of hate them for the same reason.

The developers of Maximo: Ghosts to Glory were seemingly determined to see whether or not it was possible to translate the kind of absurd 2D-style difficulty the Ghosts and Goblins games were known for into a 3D environment. In the process, they created something that may be even more difficult than those legendarily challenging 2D classics.

Ghosts to Glory’s combat is as difficult as you’d expect it to be given this game’s pedigree, but this time around, you’ve got to also deal with a surprising amount of frustrating platforming sections that will have you falling down endless pits time and time again. This game may look “slower” than the original Ghost and Goblins adventures, but in its own way, it doesn’t let you breathe for a second.

I’ll stand by anyone who argues that Shinobi is one of the most creative, underrated, and overall best 3D action games ever made. Having said that, I can not in good conscience talk about this game without mentioning that it’s the kind of difficult that will make 90% of people rightfully give up on it after only a few hours (or even minutes).

What makes Shinobi so difficult? Let me count the ways:

People who live for hard games will often admit that Shinobi is sometimes too difficult for its own good, which is honestly kind of an achievement in and of itself.