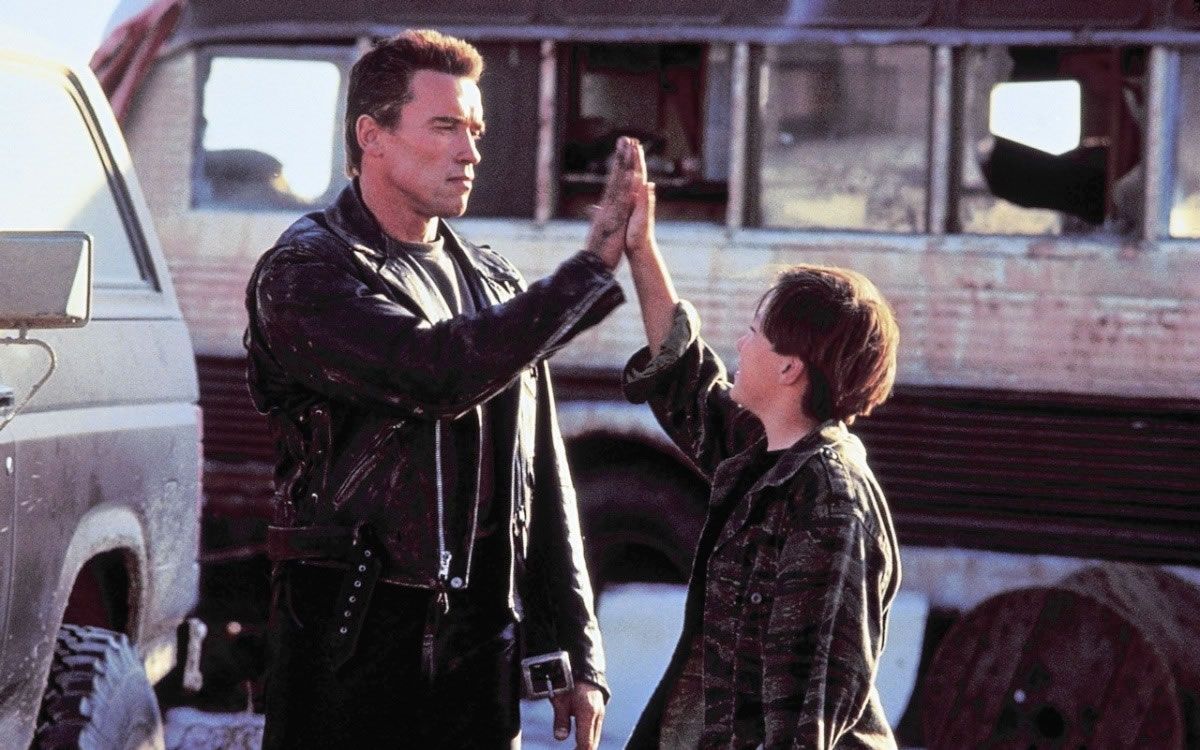 For more than a minute there, Arnold Schwarzenegger’s metallic exoskeleton appeared unstoppable. With a glowing red-eye that became the stuff of nightmares and then action figures (we’re serious), the T-800 entered the ‘90s like a wrecking ball. No matter what they threw at him, and no matter what obstacles got in his way, the cyborg did not pause, it did not rest, and it seemed to be everywhere.

Ironically, this also applied to more than just the Terminator’s onscreen antics. In the summer of 1991, Terminator 2: Judgment Day was an indestructible money-sucking machine that conquered the box office four weekends in a row in July, and then miraculously hung on to its boffo target long enough to also become the number one movie in America for a weekend in September.

It was an R-rated entertainment that was technically a sequel, yet also a standalone science fiction thriller that captured the imagination of adults as readily as teenagers. In other words, you could say they don’t make them quite like that anymore. And when looking back 30 years on to the era that birthed director James Cameron’s action masterpiece, I cannot help but somewhat envy the year’s wider definition of “summer movie entertainment” (or “content” in the modern parlance).

To be sure, Terminator 2 was king for a reason. Seven years after the release of the original sci-fi thriller, which made Cameron a go-to genre director, T2 hit audiences like a ton of bricks, with many to this day considering it superior to its predecessor. Here was a movie which pivoted away from Linda Hamilton’s scared survivor in The Terminator and ran toward her embodying a shotgun-wielding matriarch who became an instant feminist icon. The movie was also a sincere spectacle for an audience unaccustomed to computer imagery; Cameron blended groundbreaking CGI with in-camera stunts in a way that is still nifty three decades on.

In retrospect, T2 was both a harbinger for things to come—a sequel borne out of a brand name and nascent special effects—as well as a monument to an impulse that has gone largely extinct in Hollywood: to push the envelope in unexpected directions.

Terminator 2 might’ve been the unrivaled box office champ in summer ‘91, earning $204 million, but the same summer also saw the releases of Thelma & Louise, City Slickers, Boyz n the Hood, Robin Hood: Prince of Thieves, What About Bob?, Jungle Fever, Point Break, Backdraft, and The Rocketeer. Each multiplex was a rich ecosystem of competing genres, niches, and audience interests. And with the exception of The Rocketeer, every single one of those aforementioned films was a major box office hit, with nearly all of them going on to have legacies ranging from the profound to the cult.

For instance, consider Thelma & Louise, the R-rated buddy film about two women (Geena Davis and Susan Sarandon) who go on a road trip-turned-crime spree. It opened in fourth place that Memorial Day weekend, grossing less than Hudson Hawk in the same frame. The picture never topped the box office charts once, but it was able to do steady business the entire summer, nearly tripling its $16.5 million budget. On those meager week-to-week numbers, it even found a large enough audience to enter the zeitgeist and become a significant cinematic touchstone for a generation of audiences who embraced a fable where women kill an abuser and refuse to bend to society’s demands. It also made Brad Pitt an instant movie star, despite being in a third billed part.

Thelma & Louise was able to carve that legacy despite being dwarfed by the likes of T2 throughout the summer, and before Arnold there was City Slickers, which is itself one of Billy Crystal’s best comedies—this one about middle-aged New Yorkers playing cowboys. City Slickers, in turn, became an Oscar-winning crowd-pleaser despite spending most of its release in the shadow of Robin Hood: Prince of Thieves, which was the second biggest blockbuster of the year. And for all its faults, the Kevin Costner Robin Hood is still fondly remembered as a grand adventure by millennials of a certain age range, despite it never setting up a sequel, prequel, or expanded universe. It even had an unusually dark soul for a blockbuster romp meant for the whole family.

These are just a handful of examples of what was then considered box office material. Perhaps most striking though is John Singleton’s groundbreaking Boyz n the Hood, which became a surprise hit when it opened in second place among original releases on July 12 (behind Terminator 2). It went on to be one of the 20 highest grossing movies of the year. Today, its bittersweet subject matter about young Black men growing up in South Central would instantly consign the film to streaming or being placed in an arthouse box, which would mean it’d need to premiere at Sundance or several other high-profile film festivals in order to secure distribution and an awards campaign that could draw speciality audiences’ attention. In the ‘90s, Columbia Pictures bought Singleton’s script while he was still in school.

When looking at this three decades later, it would be too easy to fall into golden age thinking or pretend things were strictly better “back then.” Nostalgia is a dangerous delusion, especially for an era you weren’t really there for (I was technically around in ’91, but too young to see The Rocketeer, much less Terminator 2). And yet, when studying recent anniversaries from that era, I’m struck by the variety of stories being told. There’s a genuine sense of diversity, in the classical sense, with numerous audiences, age ranges, and even genres being serviced. Yes, there are the big action spectacles, but there are also adult-skewing thrillers, small budgeted Black dramas selling a significant amount of tickets, and even the long-lost romantic comedy.

Of course nowadays, the industry and (more crucially) audiences are striving to see a greater sense of inclusivity and ethnic diversity be embraced by talent in front of and behind the camera. The success of Singleton’s Boyz is remarkable, and in the same summer as one of Spike Lee’s best films, Jungle Fever, no less. Kathryn Bigelow, meanwhile, showed up her then-newly ex-husband James Cameron by helming one of the brawniest action movies ever made, Point Break. However, almost every other box office draw and mainstream Hollywood release in ’91 was directed by a white man, and starred nearly all-white faces.

In many ways, the opportunities for who gets to tell what stories have and are continuing to dramatically improve. But when it comes to what kind of stories the culture at large wants to see, the options appear to be shrinking by the day. There is a greater diversity of voices in front of and behind the cameras, particularly in the niche-focused market of streaming where films come and vanish into the aether every week. But unless your picture stars someone wearing a cape, or features the word “Fast” and/or “Jurassic” in the title, it’s becoming increasingly difficult to get audiences to show up—which in turn limits our options every summer as studios seek safer bets that open big and earn most of their mint in the first weekend.

In a recent Indie Film Hustle podcast, Robin Hood: Prince of Thieves director Kevin Reynolds talked about how the attitude of the industry has changed, then and now.

“In the ‘90s, the studios were healthy, we were still shooting on film,” Reynolds said. “People saw it as a golden time, anything was possible. There’s a lot of fear now. There’s a lot of fear because things are not as lucrative as they once were. Sadly, I think theatrical cinema is dying. You can pretend that it’s not, God bless Chris Nolan and his adherence to film as a medium, real film. But it’s going away, the digital age is here.”

And the way corporate-owned companies that are merging into ever greater oligarchal behemoths have reacted to that is to rely increasingly on preexisting material, previously established brands, and familiar content until that’s all there is.

Ignoring the two most recent summers, which have been impacted by the pandemic, the last “normal” summer at the box office was 2019. In that season, nine of the top 10 highest grossing pictures were sequels, spinoffs, remakes, or video game adaptations, including Avengers: Endgame, Spider-Man: Far From Home, Hobbs And Shaw, and Detective Pikachu. Several were actually remakes of ‘90s movies—The Lion King and Aladdin—and the one original film to just barely crack the top 10 only got a Hollywood budget and eight-figure marketing campaign because of the legacy of its middle-aged director: Quentin Tarantino.

When you widen the prism for the whole year of 2019, the only other film among the year’s top 20 highest earners that isn’t a sequel, Marvel movie, or remake is Jordan Peele’s Us.

The conventional wisdom is that nothing but franchises will make money now, and whether true or not that fear makes the chance for something as diverse as the summer of 1991 ever coming to mainstream multiplexes again remote.

Considering all of that on Terminator 2’s 30th anniversary is ironic since that movie itself is a sequel, and one which Hollywood returns to time and again, hoping to draw yet more blood from the stone. However, Cameron tellingly knew when to stop. He made a sequel that stunned the industry and finished his story, then walked away, spending the rest of the decade preparing more original projects that linger in the culture decades later: True Lies and a little movie called Titanic. Between film and television, the industry has meanwhile produced five different versions of “Terminator 3,” with none of them having a residual impact after opening weekend or season 1.

But then that’s also the danger of only looking to the past: You never see the risk of diminishing returns in old things, especially while in the absence of anything new.