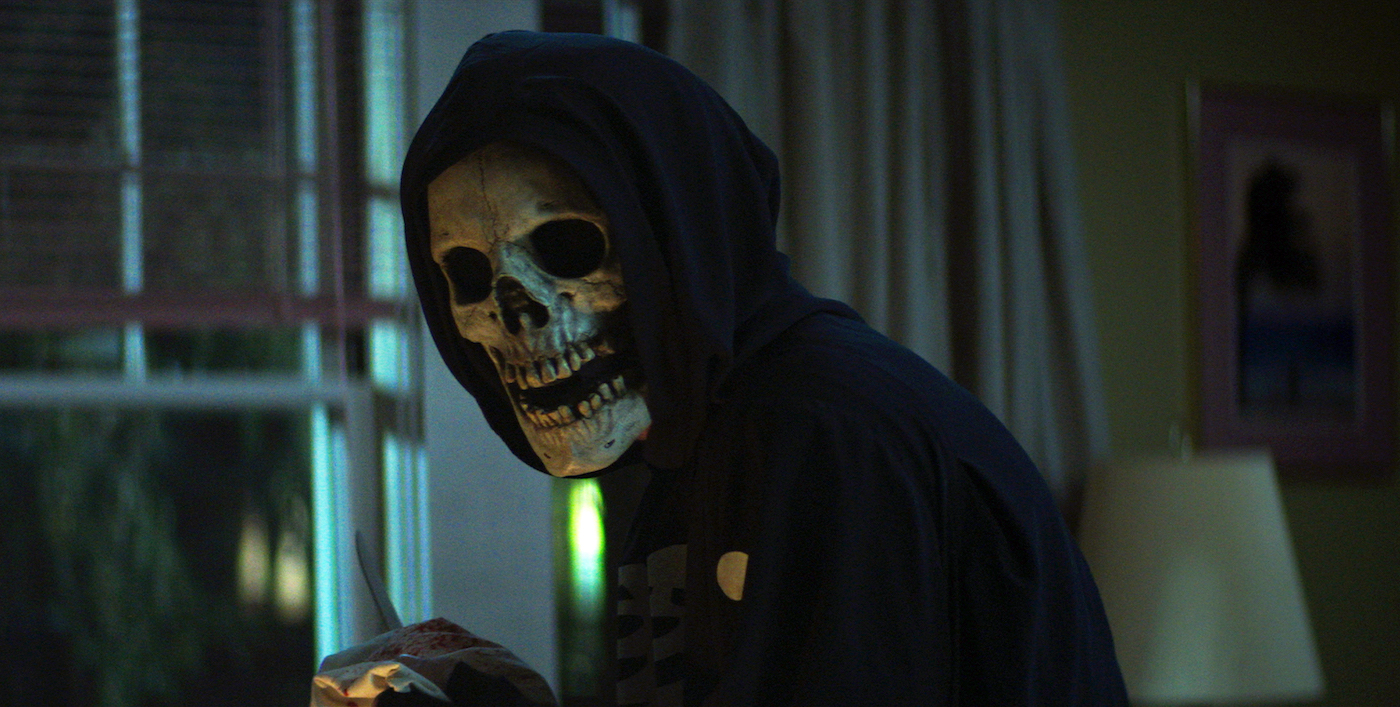 The first part of Netflix horror trilogy Fear Street has now arrived on the streaming service. It’s an homage to ‘90s slashers based on the Fear Street books by R.L. Stine and it is set in the town of Shadyside, a place riddled with tragedy. Is the town itself cursed? That’s what the series of three films will explore (the next two installments will be arriving weekly).

Part one begins with a seemingly unprovoked massacre in a mall, which ends in further tragedy as the masked killer is gunned down by police. But later, that same killer seems to be active again and he’s joined by a whole host of other monsters from the past intent on taking down the residents of Shadyside.

We learn that these are people from the past who have been possessed by Sarah Fier (exactly who she is and what she wants is still gradually unfolding) and driven to carry out multiple murders, ending in their own deaths.

Here’s what we know:

The man in the scary skeleton mask is Ryan Torres. We know he worked at the mall and was 18 years old when he went bonkers. Torres’ weapon of choice is a large knife and why he dresses in a Halloween costume is anyone’s guess. Except of course it’s clearly a reference to ghostface from Scream, which the opening of the movie pays homage to. Ryan killed seven people and was shot in the head and killed by Sheriff Goode.

The killer with the sack on his head who carries an axe is the Camp Nightwing killer. The second installment, Fear Street: Part Two: 1978 will tell the story of this massacre in more depth. What we know for now is that in 1978 at a Shadyside Summer camp 12 people were killed. We also learn that there was one survivor, who claims she saw the witch.

This is of course C. Berman (Gillian Jacobs), who we meet at the end of Fear Street Part 1. The masked Camp Nightwing killer is obviously a nod in the direction of Jason Voorhees from the later Friday the 13th movies. Another little nugget we picked up is that the Goode family – as in Sherriff Goode, the main cop in the movie – at some point after the massacre, demolished the camp to make way for the new mall. That’s right – the Camp Nightwing Massacre took place in the same place as the mall massacre…

The young woman who has a good go at slicing up Simon in Fear Street is Ruby Lane, who committed her murders in the mid ‘60s. We recognize Ruby by the distinctive ‘60s style of dress she wears, the locket around her neck and the song she sings, “You Always Hurt The One You Love,” while she’s trying to slash your face off. Ruby killed her boyfriend and her friends with a razor blade then slit her own wrists, equaling a body count of eight in total.

The killer who looks like he has scarring down one side of his face and only one seeing eye is The Milkman. This is a Shadyside murderer from 1950 who preyed on his customers. His name was Harry Rooker and he killed seven Shadyside “housewives” with a switchblade.

The who? The what? This one might be a bit of a red herring but we’re including it in case any eagle eyed readers have an insight. All we have is a headline “Body Parts Found. Humpty Dumpty Killer Strikes Again!” In Fear Street Part 1 there isn’t an attacker who looks like an egg. Or a cannon (groan). Or who pushes people off walls. So we’re not sure what this is about. We’ll just leave this here in case.

Phew, here’s at least another one we can clearly identify. Billy Barker is the very creepy little boy with the horrible oversized face mask. Billy’s weapon of choice is a baseball bat and it was a bat he used to massacre his family back in 1922. What we learn about Billy from the clippings is that he was a deformed child who was teased but not otherwise violent who bashed his brothers’ heads in while they slept and killed his parents too. Billy is also deceased at the end of the attack (according to the paper) but it’s not clear how.

Okay, this is only a tiny bit less tenuous than the Humpty Dumpty killer… but still. A blink and you miss it headline reads “Grifter Guts Girls!” And it looks as if said grifter might be the killer we see wearing what looks like a welder’s mask. Help us out in the comments…

Okay, so we’re definitely going to find out a whole lot more about this guy. Part 3 of Fear Street is set in 1666, so we’re fully expecting Pastor Miller to be a key player in the origin of Shadyside’s problem. The headline runs ‘Pastor Miller Snaps’ and we later learn that he killed kids and cut out their eyes! Eek! Another interesting nugget – the newspaper report has a subhead which reads “Solomon Goode Pledges Assistance to Victims Families”. So the Goode family has been influential in Shadyside for quite some time. We’ll have to wait for Part 3 to find out more…