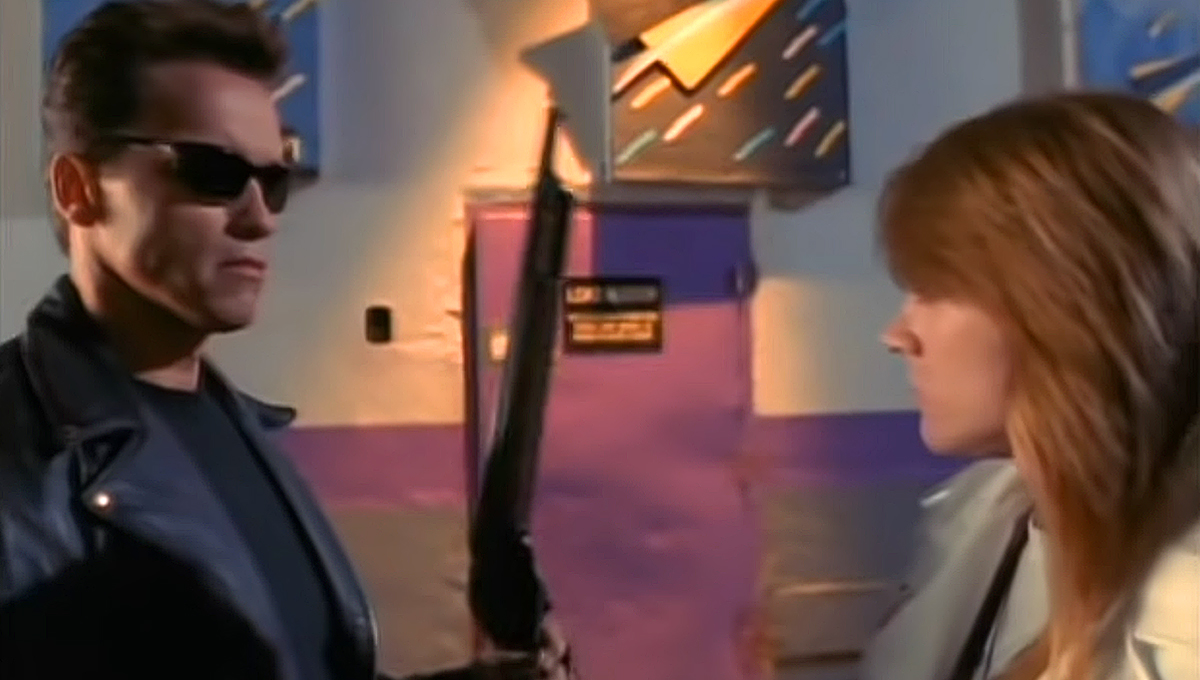 As far as blockbuster sequels go, Terminator 2: Judgment Day remains widely hailed as one of the best, having constructed a skillfully expanded spectacle without indulgently redefining the original premise. Yet, the film had to be sold to the public going into its July 3, 1991 wide release, which was nearly seven whole years after the first film cemented the superstardom of Arnold Schwarzenegger. Fortunately, a partnership with rockers Guns N’ Roses yielded a theme song in “You Could Be Mine” that would effectively convey the film’s intensity and attitude. Thirty years later, the song remains an indelible part of the revered sequel.

While fan-magazine-read sci-fi cinephiles saw Terminator 2 coming from the time the film’s tightly-scheduled principal photography commenced in October of 1990, the sequel was a surprise to the general public when its first teaser trailers ambushed big screen audiences. After all, this was a time before the prevalence of the Internet, and YouTube made the release of trailers into a commonplace, slow-burn promotional strategy. Thusly, the $102 million-budgeted film had to rely on trailers and television spots, which had effectively spoiled the film’s narrative notion of Schwarzenegger’s new T-800 being the hero this time around, poised to battle Robert Patrick’s groundbreaking, visually-perplexing T-1000. However, the still-thriving music video realm of MTV (and the radio-fueled Billboard Hot 100) could provide an additional platform for the film’s promotional pièce de resistance: a music video theme song. But, what?

Indeed, the Terminator franchise’s returning director, James Cameron—who had since pulled off an amazingly up-scaled sequel feat by following up Ridley Scott’s masterpiece with 1986’s Aliens—was subverted by suits from distributing studio Tri-Star Sony, who unilaterally acted on the idea that the film needs a music video of some kind. As the director recounted in an interview collected in The Ringer’s recent Terminator 2 oral history piece, “[T]hey’re saying, ‘Well, we’ve got to do a music video.’ And so, they go to Arnold—they didn’t talk to me—and they say, ‘We want you in a music video with some act.’ Arnold says, ‘OK, look, if you’re going to do a music video, you get the biggest band in the world. I don’t even care who they are.’ They flip open Billboard: ‘Guns N’ Roses makes sense. We’ve got a rose in the movie and bloody guns. Good, do it.’”

Consequently, it would be star Schwarzenegger himself—not Cameron—who would first foster the film’s partnership with Guns N’ Roses, who had essentially been picked out of a Billboard magazine based purely on their current position. However, Guns N’ Roses were indeed the hottest rock band in the world of the time, and, fortuitously enough, they were moving toward the September 17, 1991 dual release of the ambitious “Use Your Illusion I & II” albums. Thusly, Terminator 2’s usage of “You Could Be Mine” (from “Use Your Illusion II”) would advantageously attach the film to the debut single from the albums, which were the long-awaited first proper new material from the band—notwithstanding low-key compilation-released songs “Civil War” and a cover of “Knockin’ on Heaven’s Door,” both of which would be included on the “Use Your Illusion” albums—since the stratospheric success of 1987’s “Appetite for Destruction” and 1988 live/acoustic album “G N’ R Lies” had fully digested on the charts in 1989. The connection made the film’s release a true multimedia event, which was about as good as promotional material got during that era.

Unlike other famous chartbusting soundtrack songs directly inspired by their films, “You Could Be Mine” was not written specifically for Terminator 2. Interestingly, the song, written by Axl Rose and imminently-outgoing guitarist Izzy Stradlin, was a throwback composition from the “Appetite” era that didn’t make the final cut. This explains why the song lyric, “With your bitch slap rappin’ and your cocaine tongue you get nothin’ done” almost presciently appeared in the liner notes of the 1987 album. However, the band’s inclusion was cemented after they were courted for a private screening of the film. As Schwarzenegger recalls in the oral-history-collected interview, “We had a specific screening, it was just for us, the cast, James and myself, and Guns N’ Roses. I think that Axl Rose was extremely impressed. I remember him going to Jim and saying, ‘I’m in.’”

Fatefully, “You Could Be Mine” was on tap as the hard-driving debut single for their then-upcoming dual album event. The song’s lyrics may be topically divergent from Terminator 2’s apocalyptic time-crossing cybernetic warfare—instead a seedy Los Angeles story of a destructive relationship with a cocaine-addicted rock groupie—but the song’s hard-driving tempo and Axl Rose-imbued swagger make it a tonal match for the actioner. Indeed, the song was prominently featured in the film, serving as the brash musical backdrop to the introductory scene of Edward Furlong’s John Connor, who throws shade on his imminently-doomed foster parents before riding off on his motorbike for a spree of ATM-scheming and arcade splurging. In essence, the song was John’s defiantly-loud theme song, representing his imminent transition from delinquent to post-apocalyptic leader.

This idea, of course, would become evident with the music video over which the whole partnership was based. With the single itself having dropped on June 21, 1991 (editor-in-chief Mike Cecchini and myself have recounted similar warm memories of owning the song’s cassingle), the video manifested under the auspices of veteran music directors Jeffrey Abelson and Andrew Morahan, along with the late effects wizard, Stan Winston. Yet, it was a conceptually simple clip, in which Guns N’ Roses are playing a concert that gets an intruder in Schwarzenegger’s T-800, who’s there to terminate the band!

The “You Could Be Mine” video was put together with concert footage taken from a Guns N’ Roses 1991 concert performance at New York’s Ritz rock club edited with the footage of T-800’s ominous approach toward the stage, mixed with movie-promoting material from the film’s trailer, notably its inclusion of the now-iconic “hasta la vista, baby” line. Of course, the most memorable part of the video occurs after Axl reaches the song’s high-note killer coda, after which we see the band finally intercepted by their cybernetic pursuer while trying to leave the concert venue; an exterior scene that, according to guitarist Slash, was actually shot outside L.A.’s Roxy Theatre. However, the chase ultimately proves futile, since a scene through the killer’s mechanical infrared point of view reveals that killing the band—specifically Axl—would be a waste of ammo, thereby ending the confrontation with an awkwardly anti-climactic—albeit hilarious—detente.

Ultimately, “You Could Be Mine” became a signature tune for Guns N’ Roses. The song peaked on the Billboard Hot 100 in August 9, 1991 at #29 (mind you, at a time in which such a feat reached far more people than it does today), and lasted 15 weeks on the charts. Moreover, it became a Top 10 hit globally and even reached #1 in Finland and Spain. It remains intrinsically associated with not just Terminator 2, but the film franchise as a whole, evidenced by its nostalgic usage in 2009’s post-apocalypse-set Terminator Salvation, in which Christian Bale’s grizzled adult John Connor plays the song on an old boombox to lure a Moto-Terminator for a quick hotwire job.

Likewise, Terminator 2: Judgment Day was properly hyped by the success of “You Could Be Mine,” notably with the visual promotion by the video’s constant rotation on MTV that summer. Partially propelled by that momentum, the film went on a worldwide box office tear, breaking records and going on to gross a global total $520 million (which, adjusted for inflation, would be $1.027 billion). Notwithstanding resolute fans of the first film, the sequel remains widely revered as the best entry in the franchise (we won’t go over the sad, divisive state of the franchise’s subsequent entries) and, in 2017, even received a major 4K 3D overhaul—notably with digitally updated effects that, for example, edited Schwarzenegger’s face onto his stunt double in some key scenes. Indeed, fully-vaccinated moviegoers who were too young or just missed out on experiencing the film on the big screen would be well-advised to check local theaters for 30th anniversary screenings.

As the song say, “Now holidays come and then they go. It’s nothin’ new today. Collect another memory.”