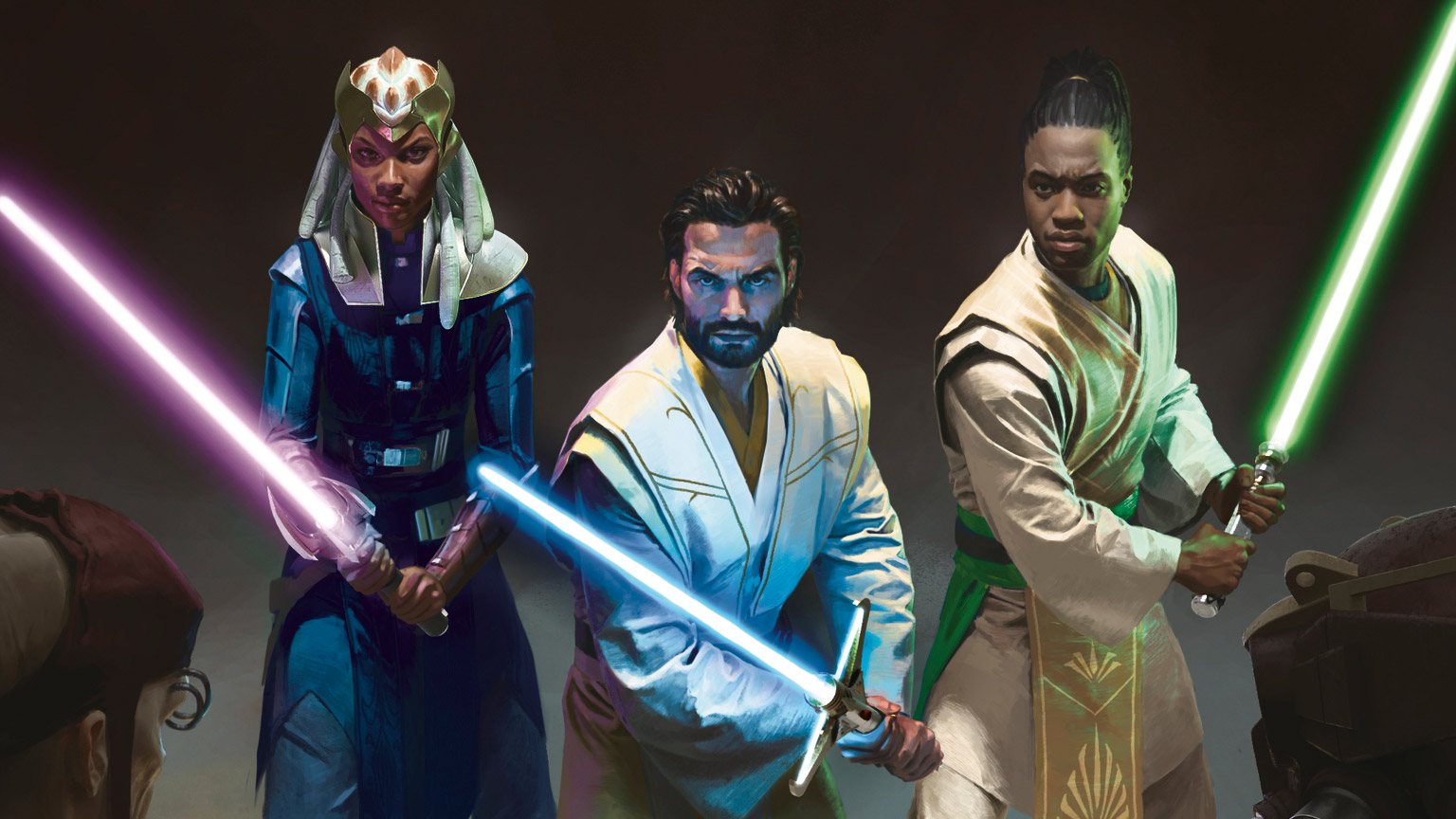 Wave two of The High Republic has a lot to say about the nature of the Jedi…maybe. Glimmers of fun concepts and Star Wars Prequel commentary shine through a book dragged down by odd pacing and low stakes.

About a year after the Nihil raiders nearly destroyed a solar system in Light of the Jedi, the Republic is putting on a show. The Republic Fair — imagine a World’s Fair or Great Exhibition, not a county fair — will show off the glory of the unified systems. In particular, the chancellor hopes to convince the Togruta queen (that’s Ahsoka’s species) to join or form a closer alliance. When the Nihil attack the Fair, the Republic is outgunned. It’s up to the Jedi — dutiful Stellan Gios, maverick Elzar Mann, and young Bell Zettifar in particular — to defend the Fair and its ideals.

Maybe this is just a pet peeve — it’s been in the back of my head since the novel Kenobi — but maybe one typical tie-in novel just isn’t usually efficient enough to really dig into more than one character. There are just too many people in this book. Every side character has a full name, honest work aplenty for Wookieepedia editors but making it very difficult to know where a reader’s attention should be landing at any given time. The pacing is also odd, a long middle sequence leading to a relatively brisk final battle. In fact, it’s paced like a three-act movie…and there’s nothing wrong with that if the character beats give the story a shape.

But The High Republic being an ongoing series hurts it here. Just as that final sequence gets going, it’s over. Other things that made the series distinct — the Jedi each experiencing the Force in a different way, in particular — are just not present in the second book. The philosophy about the Jedi not attacking first is still here, which is nice.

Connections to other parts of the Star Wars saga abound, on the smaller side of which are some surprising and brief The Clone Wars cameos. What I’d consider the larger ones are thematic. The characters in this era are Jedi on the back foot; while they’re enjoying a golden age, not facing any Sith, they’re also still overwhelmed by the Nihil. It was fun to see Jedi adapt, coming up with tactics that work particularly well against the Nihil.

In the comics, we have an interesting comparison to Anakin Skywalker: Zeen, a young girl who has been informally admitted into the Jedi Order as a young teen. This book’s Anakin is Elzar Mann. I adored him in the first book, and in the first scene of this one: a grumpy, reclusive Jedi, he struggles to connect to the Force. Scenes show without telling his feelings of the universe being against him, of the way his thought process is trapped in some juvenile generalizations.

A particularly notable comparison between the High Republic and the Prequel era is the way the Jedi handle the dark side. Elzar has some problems in common with Anakin: he slaughters Nihil “like animals,” he has disturbing visions, and he places his fate in the hands of a powerful woman — several, in fact. This is an Anakin without a Padmé, and I’m not sure whether to feel sympathetic or not for Elzar’s emotionally intense attention shifting from one woman to another. His Jedi friends are kinder to him than Anakin’s were, offering meditative retreats and a shoulder to lean on. But what this exactly has to say about the Jedi and attachment, I’m not sure. Meanwhile, Avar in particular has a surprisingly small role for a character who served as a through-line for Light of the Jedi. If she’s the epitome of the Jedi, isn’t there room to show what that means through her?

The other major Prequel connection is that these Jedi are in conversation about a changing “covenant” between them and the Senate, perhaps a decision that will lead them to go along with the Clone Wars more easily hundreds of years later. Stellan criticizes the Jedi’s actions at the Fair, and he’s right. Along with the Jedi having brief and airy conversations about whether the way they’re fighting is effective, The Rising Storm continues to show that this is an era in which people generally mean well, even former rivals. That positivity is nice.

Author Cavan Scott comes from comic book writing, and you can tell; scenes are very visual. In some sections the perspective swoops around like a camera on a track, and it’s impressive to be able to link those perspectives together smoothly. It’s also jarring next to the rest of the prose, which varies from fine to sophomoric. At times, the story seems to intentionally focus on the characters with the least information about each situation for the sake of cliffhangers. But it’s just missed potential for more detail about the people we’re supposed to be spending a long series with.

I liked Light of the Jedi despite it having a lot of the same technical flaws. Unfortunately, the second volume failws to lock in my affection for the concept of some of these characters. There are too many names and not many solid character arcs. So far, this series has been best when the new cast can bounce off one another; look at the burgeoning mentorship between Stellan and Bell. But, otherwise, there are too many solo adventures and not enough of the characters forming meaningful relationships with each other. Even a cool finale, with Bell and Loden as stand-out characters as always, can’t make the fair and the disparate, flat storylines come together.

Perhaps the series shot itself in the foot by trying to make each book both stand alone and hook to the larger series. The result is static characters and a world that gets more compelling just as the last page turns. There were dragons in this book, and somehow I was still bored. The High Republic has so, so much potential. It’s a pity the execution is so uneven.