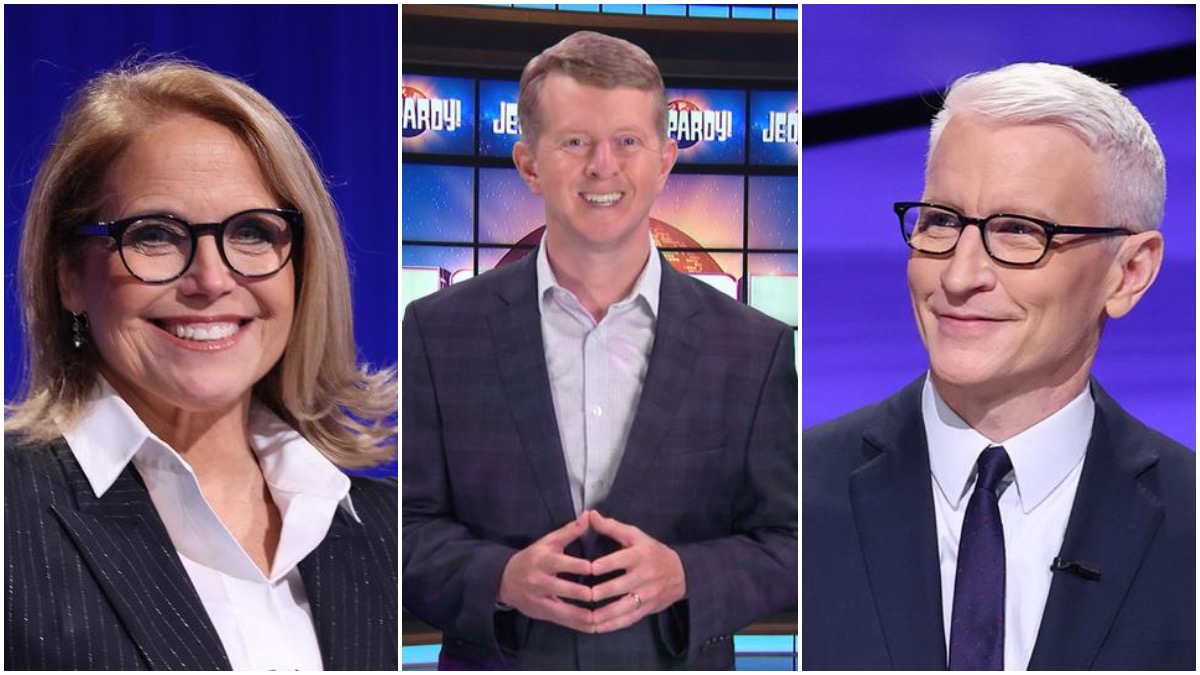 When Jeopardy! GOAT contestant Brad Rutter spoke to Den of Geek earlier this year, he shared his opinion that there is only one perfect Jeopardy! host to replace the departed Alex Trebek.

“Alex,” Rutter said. “But we can’t do it, unfortunately. That’s one of the terrible things about it. I can’t even really imagine what it’s going to be like.”

Alex Trebek was about as irreplaceable as a TV personality can be. As the host and quiz master of Jeopardy! for 37 years, the Canadian entertainer was the perfect combination of studious, professional, and playful. Following Trebek’s death from pancreatic cancer in November 2020, Jeopardy!’s producers realized there was no point in replacing the TV giant with only one host.

For all of 2021, Jeopardy! has been going with a host-by-committee approach, giving several pop culture figures the opportunity to try their hand at shepherding the game show in two-week increments. This parade of guest hosts is in part a way to honor Trebek’s legacy. It’s also an open audition to provide fresh blood with an opportunity to claim the job of a television mainstay.

With that in mind, here are our rankings of how each guest host has performed thus far.

Anderson Cooper is a good journalist and compelling TV presence. When it comes to Jeopardy!, however, he’s definitely not the right man for the job. Cooper is somewhat fortunate that human trainwreck Dr. Oz hosted first and gobbled up the lion’s share of bad Jeopardy! host press. Otherwise people may have noticed that Cooper did fairly poorly in his two-week stint.

Cooper seemingly didn’t prepare as intensely as Trebek or the other guest hosts as there would frequently be awkward pauses following contestants’ answers while the host checked if they were right. As a result, the number of Jeopardy! rounds not completed under Cooper’s tenure was unusually high. It’s a small issue, but an impactful one.

Couric’s tenure as Jeopardy! host was the victim of bad timing. She had the tough act of following two guest hosts who were extremely steeped in the show’s history in culture in official Greatest of All Time Ken Jennings and executive producer Mike Richards.

The longtime media personality ultimately did a fair job as host, with her only major flaw being interjecting a bit too frequently during rounds. Unfortunately, she doesn’t stack up well to the pros that preceded her.

While the presence of a NFL star may seem like a desperate ratings grab from Jeopardy!, Green Bay Packers quarterback and former Celebrity Jeopardy! champ Aaron Rodgers is apparently dead serious about wanting the full-time hosting job, telling The Ringer that he could easily fit the show’s shooting schedule into his NFL obligations.

Rodgers’ eagerness was evident over the first week and led to him coming across as a bit too excitable. He really settled into the role in his second week though and projected the correct balance of expertise and personability.

In contrast to Aaron Rodgers, Bill Whitaker apparently has no interest in holding down the full-time Jeopardy! job, telling The Philadelphia Tribune that he enjoys his current gig as a CBS journalist. That’s a shame as Whitaker came off as quite a natural during his two-week stint.

Soft-spoken and consistent, Whitaker was such a steadying presence in his time as host to the point that the novelty of there even being a guest host began to wear off. Ultimately he might be a little too one-note for a full-time Jeopardy! host but his time on the dais was well spent.

Mayim Bialik was a real pleasant surprise in her stint as host. In fact, she’s the best Jeopardy! guest host yet who was not previously affiliated with the show. Bialik leaned more toward the friendly end of the familiar/authoritative Jeopardy! hosting ratio. She kept up that energy throughout but was able to establish a nice balance in her second week.

As a longtime Big Bang Theory cast member, Bialik certainly doesn’t need the Jeopardy! hosting gig to pay the bills. But her experience in front of a live-studio audience and a clear passion for learning could prove useful in the position.

On the flip side of Bill Whitaker, Buzzy Cohen may at first seem like too dynamic of a personality to work as a Jeopardy! guest host. His fun nickname, distinctive eyewear, and trendy haircut are at odds with such an ancient and venerated TV institution.

As host of Jeopardy!’s Tournament of Champions, however, Cohen has been consistently great. Due to his time as a Jeopardy! champion himself, Cohen empathizes with contestants easily and keeps things going at a rapidly appropriate pace for the competitive tournament known as “The Nerd Super Bowl.”

In the Jeopardy! canon Ken Jennings is the only figure that approaches the quiz show sainthood of Alex Trebek himself. Jennings is the most impressive and successful Jeopardy! contestant of all time, winning 74 consecutive games, amassing over $4 million in earnings, and taking home the title of Jeopardy! GOAT in 2020. When he was brought aboard as a consulting producer on Jeopardy! last year, many naturally assumed he was being groomed for the hosting role.

Sure enough, Jennings was announced as the first guest host of 2021 and got the year started on the right track with over a month of excellent hosting. Jennings has said that part of the key to Trebek’s success with Jeopardy! was his intuitive understanding that the star of the show wasn’t any host or contestant, but rather the show itself. Jennings put that understanding to good use, using his wealth of experience to make the game show feel both friendly and satisfyingly competitive.

Jennings would be a fine choice for Jeopardy! host. Perhaps his only real weakness, however, is…the tweeting, as it always seems to be. Jennings has tweeted jokes that toe the line between bad taste and offensive in the past, something that he apologized for last year. The issue with Jennings on Twitter  though isn’t the risk of future offensive tweets but rather his continued use of Twitter at all along with the rest of us plebs.

Jeopardy! seemingly exists outside of time itself. Save for improved graphics and Trebek’s graying hair, the show has remained largely the same since it premiered. The Platonic ideal of a Jeopardy! host would seem like he or she was spawned from the set itself, returning backstage to sit on their trivia throne and contemplate the mysteries of life between tapings.

Jennings does a superb job of honoring Jeopardy!’s legacy but he’s almost too accessible and engageable a public figure to have the necessary gravitas of Jeopardy! host.

But, of course, everything we just said is shallow, dumb, and overly idealizing a syndicated game show. So if Ken wants the job, then great!

Alex Trebek would occasionally be asked in interviews who he’d like to replace him. It was not a question he frequently answered because who would want to speculate about an event that would presumably only occur after their death. He often joked that Betty White should because she was a close friend. But in the few instances he did consider the question seriously, he offered up Los Angeles Kings play-by-play announcer Alex Faust, Turner Classic Movies host Ben Makiewicz, and CNN legal analyst Laura Coates. Ultimately, however, he told journalists at the Television Critics Association press tour that he “would leave it up to the people in charge.”

Well, what if one of those mythical people in charge was the right choice to host all along? Mike Richards is an executive producer for Jeopardy! and its Merv Griffin-created syndicated companion Wheel of Fortune. Richards has a long history of producing other game shows like Weakest Link, The Price is Right, and Who Wants to Be a Millionaire? He’s even hosted a couple of game shows of his own such as Beauty and the Geek and The Pyramid. After Ken Jennings served his month-long stint as host, Richards stepped in for two weeks, seemingly only to buy the show some time before it could set up more guest hosts.

Richard’s two-week tenure as guest host, however, was absolutely superb. Despite the stuffy connotation associated with the job “executive producer”, Richards was the most outwardly bubbly and joyful guest host yet. He still projected an air of authority and trivia mastery, likely due to his comfort and experience with the format. Richards was also an attentive interviewer, and well-researched – his shows were among the smoothest this season thus far.

Richards lacks important name recognition (in fact, his name is about as generic as they come) and would not win Jeopardy! any more viewers on star power alone. It also must be said that Jeopardy! could stand to diversify the syndicated TV game a bit with this hosting decision by choosing a woman or person of color.

Whether Richards is selected as the full time host remains to be seen. But as executive producer, he’ll be involved in the decision one way or another. And if his talent scouting is anywhere near as good as his hosting ability, then there is nothing to worry about.