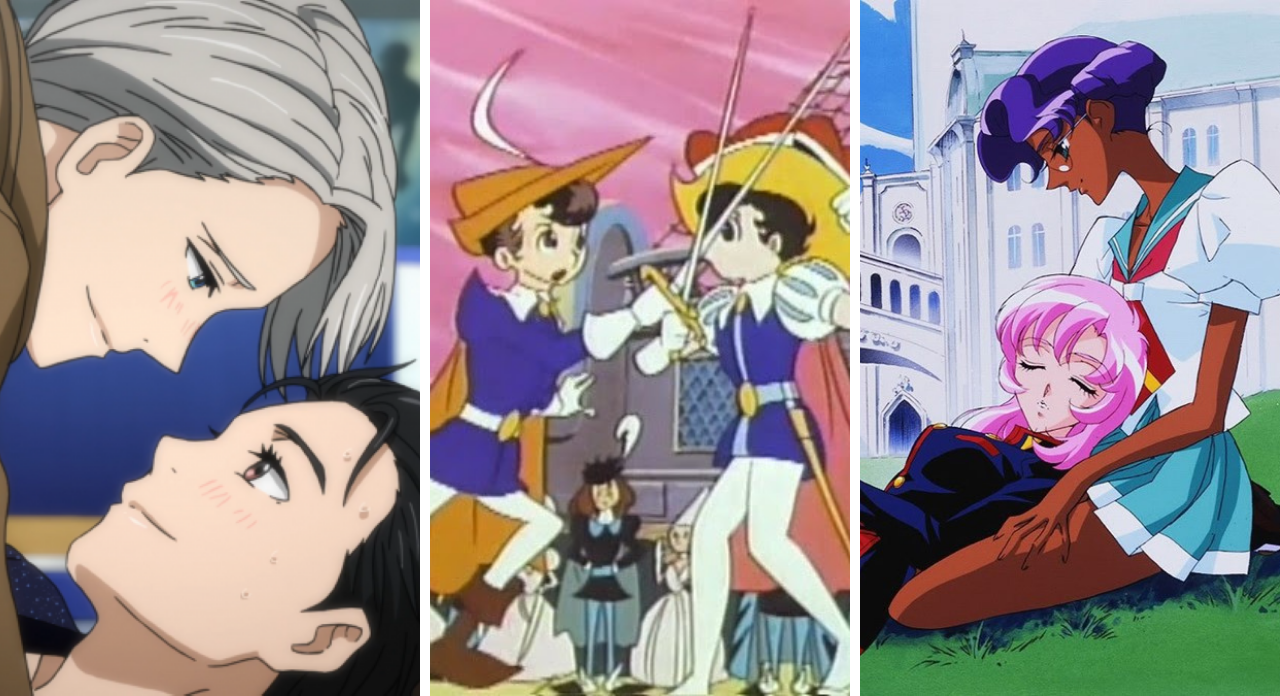 Diverse storytelling is one of anime’s most appealing qualities. Want a show about superheroes? There’s a series for you. Ninja? You, too. Demon slayers? Yup. Not interested in action or horror? Don’t worry. You can find series about high school volleyball teams, people who transmigrate to another world, and workplace romance. It’s not an exaggeration to say that there’s an anime for everyone, no matter their tastes or preferences.

Given the wide variety of stories, there’s a lot of anime about LBGTQ people and the queer experience. To be clear, anime has more than its fair share of problematic portrayals such as uninterrogated crossdressing tropes, unchallenged homophobia and transphobia, and comedy at the expense of a queer character. But these things are hardly unique to anime, unfortunately. Despite these shortcomings, the format does have great series exploring the LGBTQ experience in different contexts and genres so here are some of the best queer anime to watch.

One of the series that launched Studio MAPPA into its present-day prominence, Yuri on Ice takes us into the world of championship-level figure skating. It revolves around struggling Japanese figure skater, Yuri Katsuki, and bored Russian figure skater Victor Nikiforov, who audaciously agrees to be Yuri’s coach. While the sport and respective cultures of its leads are infamously known for their real life homophobia, Yuri on Ice deliberately presents a story where none of that is present. And with a film expected to drop at some point in the future, now’s the time to watch this gorgeous series if you haven’t already.

In this high school romance, two girls unexpectedly connect when they each turn down romantic confessions from male classmates. Their new friendship takes a surprising turn when the older girl, Touko, reveals to the other girl, Yuu, that she’s in love with her. Despite Yuu not yet returning her feelings, their relationship continues to evolve when Touko asks Yuu to manage her campaign to become student council president and then later when they help put on a school play. While the original manga is more explicit about the girls’ eventual happy ending, the anime still brings to life a realistic portrayal of self-acceptance and changing feelings during the teen years.

When No. 6 opens, we meet Shion, a privileged boy with a bright and promising future. But because this is a dystopian story, that doesn’t last for long. One night, Shion helps another boy named Nezumi. Unfortunately Nezumi is an enemy of the state and for his kindness, Shion is punished by being stripped of his elite social status. Fast forward a few years, the boys meet again, and their reunion leads to the uncovering of a vast government conspiracy. If you like wild sci-fi plots to go with your queer themes, No. 6 is the show for you.

While there aren’t yet many anime series that explore the trans experience, Wandering Son does a stellar job making up for that lack. The show focuses on two kids, Shuichi and Yoshino, who meet in fifth grade. Shuichi is a trans girl and Yoshino is a trans boy, and Wandering Son follows the two friends from elementary school into high school, chronicling their respective journeys with their evolving gender identities.

One of the biggest anime of the 1990s, Revolutionary Girl Utena was a trippy rollercoaster ride. It explored self-identity and gender roles against the backdrop of underground duels at an elite academy. Revolutionary Girl Utena was the anime for many queer feminist girls and for good reason: the idea of a princess who’d rather be a prince and save herself instead of being saved is one that resonated then and still resonates today. For this reason, and many others, Utena would go on to influence some of today’s biggest animated series like Steven Universe and the new She-ra: Princess of Power.

Casual anime fans may want a break from the intense stories and long-running series that pervade the format. Some hardcore anime fans may too! Doukyuusei is a film that portrays the sincere and heartfelt relationship between two high school boys who fall in love. That’s it. That’s the story. And it’s a good one.

Given takes a different approach to high school romance. Ritsuka aspires to become a musician, but he’s lost his passion for playing the guitar. And as any creative person can attest, losing that fire for the thing you love most can make life seem mundane and dull. Lucky for him, he meets the quiet Mafuyu and hears the other boy’s golden singing voice. The series is one that music enthusiasts everywhere should watch—even if only to peep at the episode titles and the songs they reference. A follow-up film explores the complicated relationship between the two other band members, Haruki and Akihiko.

Land of the Lustrous

Set in the distant future, Land of the Lustrous introduces us to the Lustrous, a race of crystalline lifeforms. They wage a constant war against the Lunarians, a hostile race that likes harvesting the Lustrous’ bodies. They’re actual gemstones, remember? It kind of sucks. The anime preserves the intentions of the original manga and makes the deliberate choice to refer to the Lustrous with they/them pronouns. After all, what would gender look like in a crystalline lifeform? They certainly wouldn’t resemble conventional, Western concepts of gender, that’s for sure.

A series for the classic anime fans, Princess Knight is based on a manga by the legendary Osamu Tezuka. It follows Sapphire, a girl who has both “the blue heart of a boy and the pink heart of a girl.” Considering the manga was first published in the 1950s, this genderbending premise was groundbreaking, even though some aspects are now dated. Without Princess Knight, we wouldn’t have later iconic series like The Rose of Versailles and Revolutionary Girl Utena.

And one final bonus…

The Stranger by the Shore

While this film doesn’t hit FUNimation until next month, the premise is unabashedly queer and familiar to many LGBTQ folks. Shun is a novelist who was cut off by his family after he came out as gay. When he meets the recently orphaned Mio, he must grapple with the past to move on and embrace his future.

What are some of your favorite queer anime? Let us know in the comments!