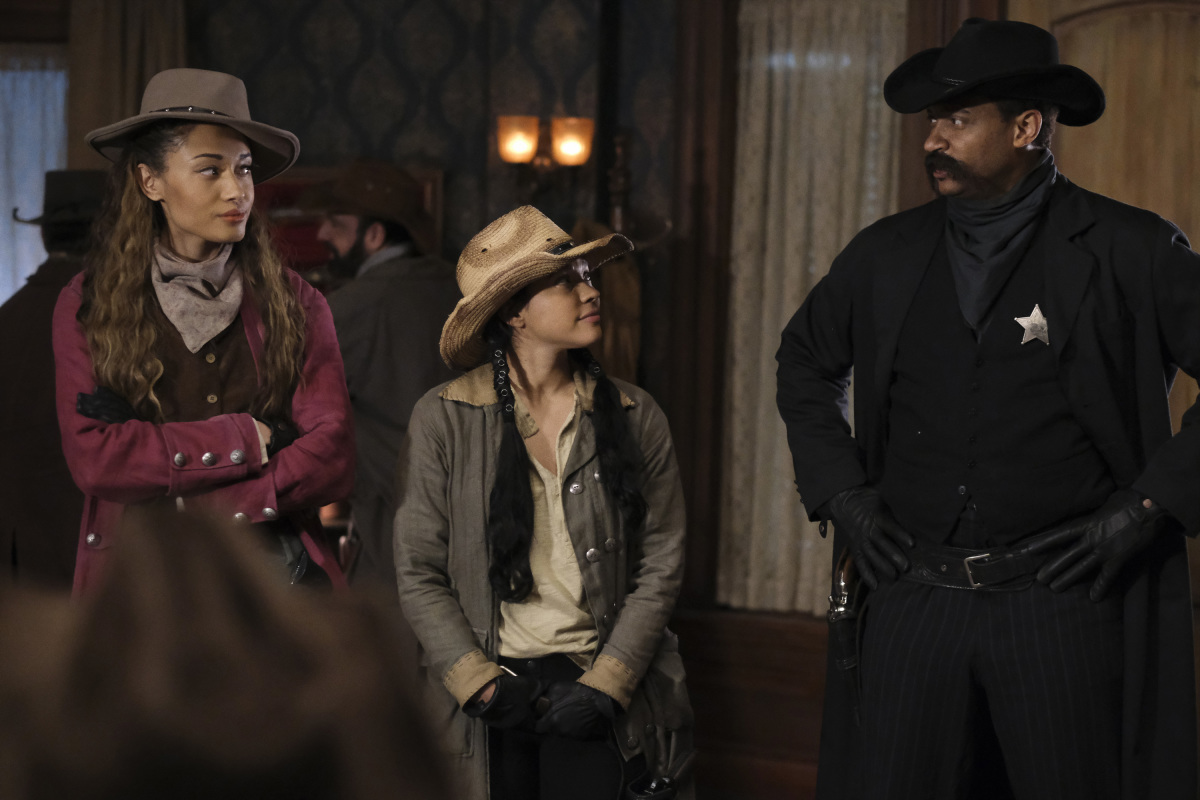 David Ramsey, who played John Diggle for eight seasons on Arrow, is making the rounds on the current slate of DC TV shows both in front of and behind the camera. Diggle made his first post-Arrow appearance in Gotham City, in Batwoman, season 2 episode 16, “Rebirth.” But on the latest episode of Legends of Tomorrow, “Stressed Western,” Ramsey steps into the boots of famed Marshall Bass Reeves, and has a run-in with the Legends in the Old West.

After the team reunites with Sara, she wants to have one more “normal” mission before she reveals that she’s a human-alien hybrid clone of herself who can regenerate. Their search for time-displaced aliens takes them to Fist City, but what they find instead of lively roughhousing in rowdy saloons is a well-behaved town that doesn’t serve alcohol, have brothels, or any of the staple characteristics of an old west town. A singing narrator introduces them to “the gladdest place on Earth.” They soon learn that the alien they’re looking for is attracted to anger and consumes anyone who gets too riled up, and that it’s controlled by the Sheriff, notorious criminal Levi Stapleton.

While Sara and co lean into the absurdity of the situation, going as far as to join a good ol’ hoedown throwdown, Astra jumps on the opportunity to strike gold and make a name for herself. She and Spooner reluctantly team up and discover a trail of gold that is actually the alien’s excrement. After some ominous lurking, the mysterious figure dressed in all black who’s been surveilling Astra and Spooner, reveals himself as none other than Bass Reeves. He tells them that the worm is what made Fist City a boom town and that the townsfolk will do anything to protect their gold.

When the townspeople realize the Legends want to kill their cash cow, they drop their nice facades and go after them. Sara takes a shot to the head, and the wound immediately heals itself, revealing her secret to the team. Sara has always defied death, but being a clone and an alien-hybrid is a new and different kind of challenge. With Constantine harassing Gary for information on the magical space fountain, Zari minding Behrad’s business, and Ava and Sara having a couple’s spat, Nate emotionally unloads to draw the worm to him.

Reeves leads the women back to the town, and Spooner destroys it with help from Astra, who boosts the power with her magic. Reeves leaves Astra and Spooner with a great lesson about making the fact that people underestimate you your power. While everyone else was focused on Diggle and what happened after he received the glowing-green ring, the showrunner wanted Ramsey to do something different for Legends of Tomorrow.

“I got a call from the showrunner during this whole kind of—‘Hey, John Diggle will appear back in the Universe and some of these episodes you’ll direct. But Legends is not going to be John Diggle.” Ramsey says. “We want him to be a historical character that we want to say was related to John Diggle, but we won’t spell it out, because the person who looks like John Diggle is now playing Sheriff Bass Reeves, and we can assume that some places in Diggle’s history, Sheriff Bass Reeves was his relative.”

Bass Reeves was the first Black U.S. Marshall, and is rumored to be the inspiration for the Lone Ranger, a fitting choice for one of Diggle’s ancestors.

“Honestly, I didn’t know him super in-depth and it was fascinating to find out more about him as I got the announcement that I would play the character,” Ramsey says of his familiarity with the legend of Bass Reeves. “But I was happy that he appeared on Legends the way he did, that it fit within the zaniness of the show.”

Zaniness is par for the course for Legends of Tomorrow. In “Stressed Western,” the team searches for an alien in an uncharacteristically wholesome western town, where gunfights give way to dance competitions. For Ramsey, who also directed the episode, the Western-inspired setting presented several unique challenges.

“Shooting outside, in January, in Vancouver, that’s one thing,” he says. “We’re outside with horses, carriages, snow, mud, and rain. It’s not fun.” Ramsey also had to navigate directing a large cast under strict COVID guidelines. “We had a big hoedown, a big dance scene, and we had 40 people including crew on the set dancing, breathing hard. So trying to practice social distancing and keep everyone protected—and we were fortunate in that we did—presented its own challenge, which is unique to the times we live in.”

But it’s a responsibility he took seriously.

“My episode was the first time this season that you had as many background characters in any one scene. So I had the burden of that.”

Ramsey will continue making the rounds in upcoming episodes of The Flash, Supergirl, and Superman & Lois. We’ll have more from him on Diggle’s journey coming soon.