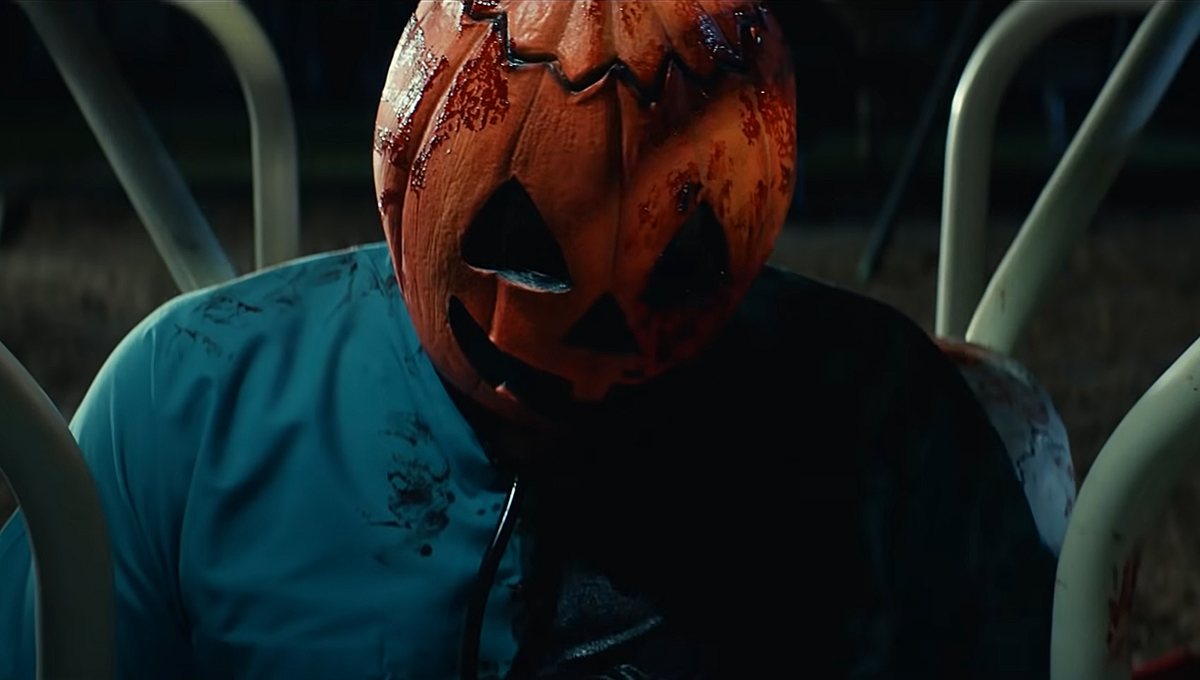 Halloween Kills has freed itself from the burning basement of pandemic delays to tease the further rebooted rampages of masked maniac Michael Myers. While the sequel’s war waged against the killer by Jamie Lee Curtis’s Laurie Strode—joined by her daughter and granddaughter—is its driving force, the trailer notably showcases masks grotesquely familiar to those who saw divergent 1982 sequel Halloween III: Season of the Witch. However, an odd meta moment from that film makes those masks more than mere nostalgia.

Michael Myers isn’t exactly known for indulgently ostentatious displays of his victims, and typically kills with silent efficiency before moving on to find further opportunities. However, the trailer for director David Gordon Green’s Halloween Kills has the archetypal slasher in unique form, since we are shown a trio of his latest victims carefully displayed on a playground merry-go-round, each adorned with macabre masks of a skull, jack-o’-lantern and witch, which, of course, are the glow-in-the-dark guises manufactured by the sinister Silver Shamrock Novelties company in Season of the Witch. Their inclusion is not only exciting fan service, but also creates meta-minded movie symmetry (albeit nearly forty years later), since the notoriously-Micheal-less threequel sported a similarly meta moment callback to the absent killer.

Season of the Witch, which saw creator John Carpenter hand the reigns to a cohort in writer/director Tommy Lee Wallace, represented a dramatic detour from slasher tropes, shifting focus from a hulking horror one dreads in the dark to a more insidious variety of dread draped in an allegory centered on rampant consumerism that somehow segues into mass paganistic human sacrifice and even androids…yes, androids! Indeed, the film takes audiences away from suburban Haddonfield, Illinois to a Northern Californian small-town setting, in which Halloween masks—specifically ones resembling skulls, jack-o’-lanterns and witches—are apparently big business. Yet, the only game in this particular town is Silver Shamrock Novelties, a mysterious company that’s pushing sales hard (with an iconically-irritating “London Bridge” TV jingle,) for the aforementioned trio of masks, designed to be worn by children in front of their television sets precisely at 9:00 p.m. for a hyped Halloween night “giveaway.” However, this is obviously more than a bizarre marketing campaign, and a gruesome Trojan horse terror awaits the company’s young customers.

One must then wonder how any of this possibly connects to Halloween Kills, which is separated canonically by multiple iterations. Pertinently enough, Season of the Witch contains a brief, but consequential meta moment that one could argue serves the same meta purpose of the trailer’s callback. The scene in question focuses on a television playing in a bar, at which point the bartender changes the channel only to stumble upon a television spot for—you guessed it—1978’s original Halloween, thereby providing Michael Myers a brief, fourth-wall-detached presence in the film. Audiences at the time dismissed this as a cheeky throwaway moment in a film that’s clearly more light-hearted than the previous two entries. Yet, for what it’s worth, it does establish that Season of the Witch takes place in a separate universe, one in which Halloween exists as it does to us, as a fictional film, eliminating the idea that Michael might be lurking around. Likewise, while Halloween Kills is several continuity degrees removed from the 1982 threequel, its inclusion of the signature trio of Silver Shamrock masks might just indicate a reversal of the dynamic, establishing that Season of the Witch exists in the current Blumhouse-co-produced franchise as a fictional film; one that might have spawned its own accompanying mask merchandise, which Michael could have appropriated for his own murderous piece of conceptual art.

However, unlike Michael’s blunt approach to killing, Silver Shamrock’s scheme involves implanting the back of each mask with a hidden microchip—each containing a dark-magic-imbued fragment from Stonehenge—that becomes activated by the broadcast, causing the young wearers to absorb evil energy that kills them, leaving a swarm of insects and snakes to break out from what’s left of their brains—a clear allegory for what older generations always said would happen if you watch too much TV. The situation ends up becoming personal for a doctor accidentally involved, Daniel Challis (Tom Atkins), and Ellie Grimbridge (Stacey Nelkin), whose father was mysteriously murdered while in Daniel’s care. Yet, Michael’s usage of the masks in Halloween Kills could also be interpreted as a like-minded, but more straightforward tribute to the media-made machinations of Silver Shamrock—perhaps as symbolism meant to instill widespread terror when his display goes viral.

Of course, it’s also important to point out that the admittedly-muddled meta theory of this writer would also create a canonical conundrum that’s far deeper than a slasher franchise deserves to delve. After all, the notion of Season of the Witch existing as a movie in Halloween Kills also means that the film’s TV spot shout-out—identifying 1978’s original Halloween—is also applicable, creating a bizarre Halloween-ception dynamic in which the current franchise takes place in a universe containing a film (Season of the Witch) in which a film within that film (Halloween) chronicles events pertinent to what’s taking place here. It gets even stranger when considering that, throughout the various reboots released over the years, the original film remains uniformly acknowledged as canon, which lends the franchise a kind of branching multiverse element. Confused yet?

Nevertheless, Season of the Witch was widely seen as the box-office-bombing (at $14.4 million domestic,) black sheep of the Halloween film franchise—even as its continuity eventually underwent reboots, creating a confusing confluence of cinematic canons. Yet, in hindsight, it seemed necessary after it became clear that fans were starting to get bored with Michael Meyers butchering hapless teens after 1981 sequel Halloween II. Thus, Carpenter made the bold move of shifting the franchise away from its signature Shatner-visage-sporting serial killer mascot to experiment with establishing anthology designs. While it obviously came up short, posterity has been far kinder to the film. Thus, the visual shout-out in Halloween Kills, while unlikely to be attributed to fourth-wall-breaking universe-crossing anomalies, is certainly welcome acknowledgement of that boldness.