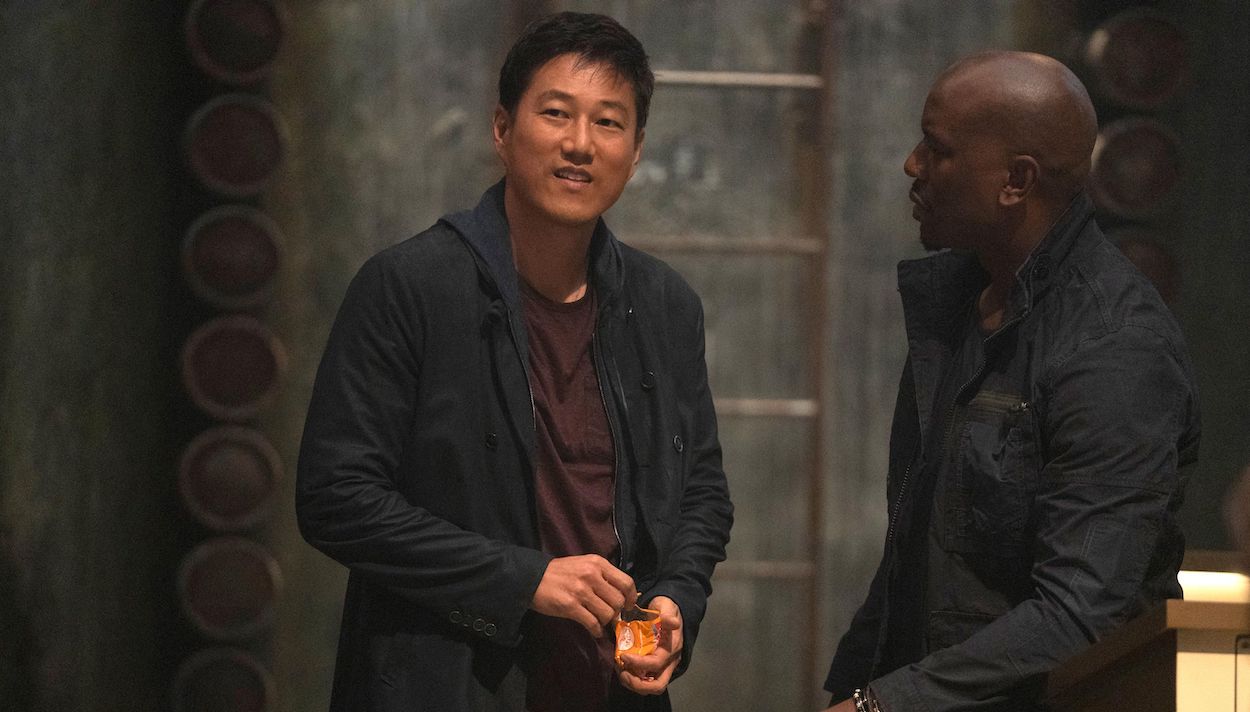 So quick question: How many folks in your theater stayed for the end credits of F9, the 10th film in the Fast and Furious saga? I know I can say everyone did in mine. That’s because with summer blockbusters back, we’ve all remembered our training to be good little Pavlovian dogs and stay for a treat after the film fades to black. And F9 just gave a juicy one too.

In a nondescript gym/vaguely insidious lair, Jason Statham’s Deckard Shaw beats a full-sized punching bag until his knuckles probably bleed. Only then do we realize he’s keeping some poor bastard wrapped up inside of the target. Full disclosure: I wasn’t sure if that was Otto—the sniveling silver spooned traitor who was working with John Cena’s Jakob in F9. He was honestly too smeared in blood to know for sure, but whoever it is, he’s having a terrible, horrible, no good, very bad day.

Be that as it may, that’s not the point of this scene. It’s just to let you know Deckard Shaw is still up to Deckard Shaw shit. Even after saving the world with Luke Hobbs in the spinoff movie, it turns out Shaw’s still not a nice guy. But perhaps it’s good to be reminded of such things because a moment later, the one-time arch-villain hears a knock at the door. Who could that be?

None other than Sung Kang’s Han Seoul-Oh! The man he left for dead in Fast and the Furious: Tokyo Drift and Fast & Furious 6.

If you don’t remember the ins and outs of their backstories, let’s just say they have significant beef. Back when the third Fast and the Furious movie was not set in the distant future, Kang’s Han died in a fiery freak accident during a Tokyo drifting race. Only later do we learn that his vehicle was sabotaged by Deckard Shaw as an act of vengeance for Han and the Family™ putting Deck’s little brother, Owen Shaw (Luke Evans), in the hospital. So he runs Han off the road and calls up Dom Toretto so he can hear the sound of the explosion that is about to engulf poor Han.

BUT we now know thanks to F9 that was a double fakeout-blind of an accident. Deckard engineered it to kill Han in what would look like an accident to the other racers, but Han knew it was coming and in turn planned to use it to fake his own death while working for Mr. Nobody (Kurt Russell), who was helping Han protect a young orphan named Elle (Anna Sawai), whose blood contained the key codes to a satellite program which could take over the world.

So Han “died” and Deckard Shaw went on to get his face busted in when he engaged in a duel with Dominic Toretto wherein both men wielded wrenches like they were broadswords. Poor Shaw never realized that “in a street fight, the street always wins.”

And yet… even though the family sent Shaw to prison as their own act of revenge on Han’s behalf, in the next movie they would help Shaw escape because of contrived plot mechanics I will not recite here… and then they invite him to the cookout at the end. Granted, Shaw saved Dom’s infant son to garner that invitation, but he still murdered a member of the family. For at least two films though, Fast and the Furious wanted you to forget that.

It outraged a fair number of fans, and it frustrated Justin Lin too, who created Han with Kang way back before he even knew he’d make a Fast and Furious movie. Yep, Han first appears in Lin’s second feature, Better Luck Tomorrow (2002). To see the character just blatantly ignored by The Fate of the Furious is what brought Lin out of Fast and Furious retirement.

“That was a fucked up move on [F8],” Lin told Esquire last year. “Han is special. It really made no sense and, as an Asian-American, it kind of did shake me to the core. You’re like: ‘Wait, did we just get reduced to a fucking character that you don’t even address? That nobody fucking cares about anymore? Are we fucking back to Long Duk Dong shit again?”

So Lin returned to the series he made a phenomenon with the express purpose of bringing justice to Han. Strangely, however, it was not revealed that Dom and company knew Han was alive this whole time, which still makes their chummy relationship with Shaw in the last movie bizarre. Even so, the end credits scene promises bringing Han back from the dead is just the beginning of the franchise’s penance.

What does the post-credits scene set up? A heart-to-heart, and maybe a fist-to-fist, between Han and the man who tried to send him to the morgue. If Shaw wants to truly be family, it’s time for him to earn it. That look on his face suggests it’ll be a lot of work.

Maybe in Fast and Furious 10…