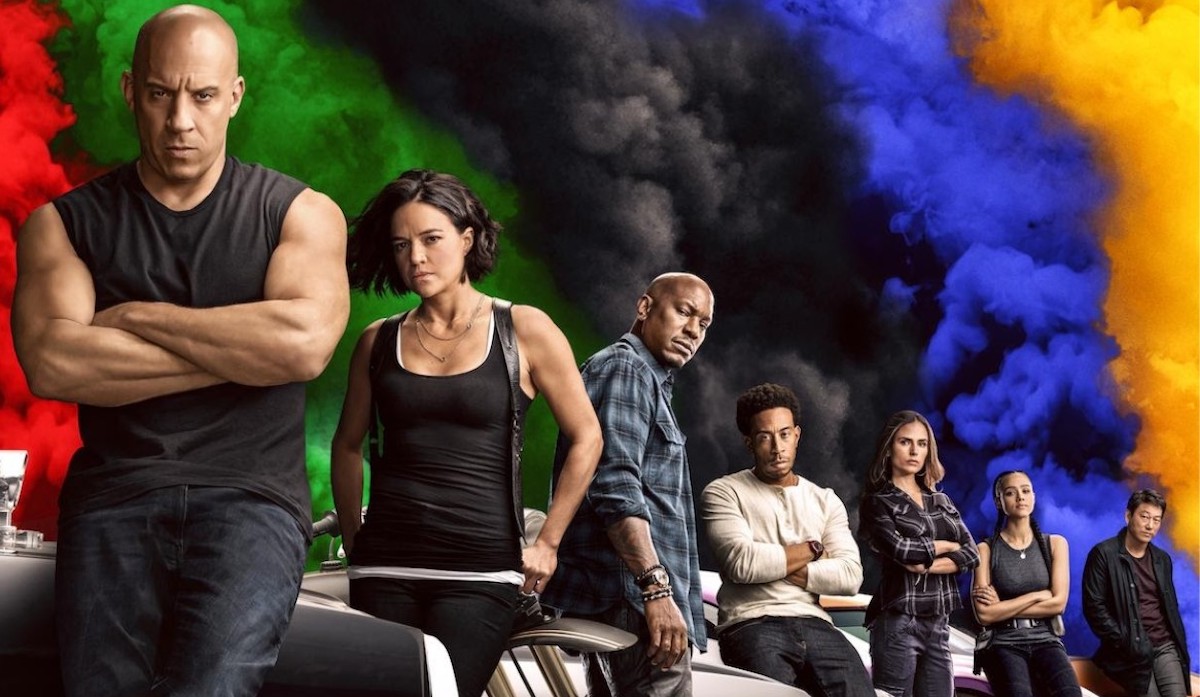 Family. It’s the mantra by which Vin Diesel’s Dom Toretto has lived his life for nine movies, and it’s long been the handy slogan for the Fast and Furious franchise, too. But perhaps fittingly for an installment which sees director Justin Lin step back behind the camera, the theme of one’s chosen family has never been more pronounced.

What it means to be in Dom’s “mi familia” is central to F9. After all, this is the film where we learn Dom and his dear sister Mia (Jordana Brewster) have another sibling who they never speak of: John Cena’s morally ambiguous Jakob. As becomes clear over the course of the film, Brian might’ve been the brother Dom chose, but that was only after choosing to disown his actual little brother. But it’s kind of a funny story about the past: it can come roaring back at you like a Mustang flying beneath a military jet.

Hence when the F9 ending comes around, all those inner conflicts come bubbling to the surface. Indeed, the actual narrative stakes of the finale are almost an afterthought.

The basic mechanics of the ending are fairly simple. Jakob and his oily business partner, poor little rich boy Otto (Thue Ersted Rasmussen), have successfully stolen access to Ares, a digital weapon operated from a satellite that gives its owners control over every operating system in the world. Or as Ludacris’ Tej points out, “Ares is the God War; if Jakob gets his hands on this, he’ll be the God of Damn Near Everything.” Once its upload is complete, Jakob and Otto will more or less be able to hold the whole world hostage.

The actual folks who save the day, then, are really Tej and Roman (Tyrese Gibson) who ride a rocket-powered Pontiac Fiero into space. By driving the car straight through the satellite, they prevent Otto from gaining control of the whole world’s digital space. But back on earth, he’s already cut Jakob out at this point, making a new deal with his brief prisoner Cipher (Charlize Theron). Which on a certain level you have to respect since she burned Otto harder than a thousand mean tweets with that “You’re Yoda” line.

By teaming with Cipher, the silver spoon prick sets Jakob up to die. Instead Dom’s little brother forms a new alliance with his long lost siblings, and together they bring down Otto’s truck and Cipher’s drone-controlled plane.

Why Dom Is Furious

More important than the plot mechanics of space travel and digital MacGuffins, however, is the relationship between Dom and Jakob. Established with total straight faced sincerity in the opening credits, Dom and Jakob’s backstory rewrites the very first The Fast and the Furious movie where we were told Dom went to prison for beating near to death the man responsible for his father’s racing crash. As we now discover through flashback, that was a lie that Dom only wishes was the truth. While the man who got wrenched might have helped cause their father to crash, Papa was set up to lose the race due to Jakob sabotaging the vehicle.

This is the dirty secret which caused Dom to banish Jakob from his sight after he got out of prison, and it is why Jakob remade himself into… well, John Cena. He wanted to be his own man and a greater alpha than his big brother could ever dream of becoming. Dom Toretto, the ultimate paterfamilias, pushed his actual flesh and blood away and has been attempting to replace him ever since.

It’s an interesting retcon which gives Toretto’s “Family” a little more depth and also sets Cena up to be a franchise mainstay, presumably replacing the unmentionable Luke Hobbs (Dwayne Johnson), whose offscreen beef with certain co-stars makes a return unlikely. Because, of course, Jakob really didn’t try to kill his father; it was Dom’s misunderstanding because their Dad asked Jakob to help him throw the race. And through the compassionate influence of Mia, Jakob discovers he really still wants to be Dom’s little bro.

It’s a nice sentiment, although it plays an interesting contrast to another major subplot in F9. Much of the film is rightly about bringing justice to Han (Sung Kang), who died in Fast & Furious 6/Tokyo Drift (the timeline is complicated). Yet his murderer was forgiven and accepted as a member of the family in The Fate of the Furious.

The Han of It All

In F9 it’s revealed that Han faked his death to protect a young orphan named Elle (Anna Sawai) in Tokyo. Nonetheless, the man Dom thought killed another surrogate brother was invited to the family barbecue in the last movie. Jakob did not kill anyone in Dom’s new family… but he did try to hurt Elle, whose blood held the Ares access codes. He certainly kidnapped her and threatened an extended member of the family. It’s also unclear if Jakob played a role in shooting down the plane Mr. Nobody (Kurt Russell) was on before the movie started, but he did work with Cipher at the time—the woman who also killed the mother of Dom’s child.

We of course don’t know if Mr. Nobody is alive or dead, but he was a close enough associate to Dom’s kin that they wanted to investigate his disappearance and save him if they could. In other words, Jakob is only a few degrees removed from Jason Statham’s villainous Shaw who was so quickly forgiven. But then, I suppose that’s why we never learn Mr. Nobody’s fate; nor is Jakob quite yet at the stage of being at the family cookout. That can come later, as there are at least two more mainline Fast and Furious movies in the works.

In the meantime, the film closes on Dom once again at the grill. Trej and Roman have returned from space after spending weeks on the International Space Station. It’s left ambiguous how there was enough food or oxygen for their unplanned visit, and how this wasn’t a global incident. (Also would international governments see them as heroes for stopping a terrorist like Cipher? And if so, would that not be a front page story around the world?) Whatever, they’re back from orbit and are now chilling in East LA with Dom.

And as food is put on the table, everyone waits for the one person whose chair remains empty. While the movie has the good grace not to CGI Paul Walker’s face into another scene, the unseen driver running late to the dinner is of course Brian. At least in this universe, the reunion is whole.

… And if you stay for the post-credits Han may yet truly bury the hatchet with the family’s most controversial member: Jason Statham. But that’s another story for another time.