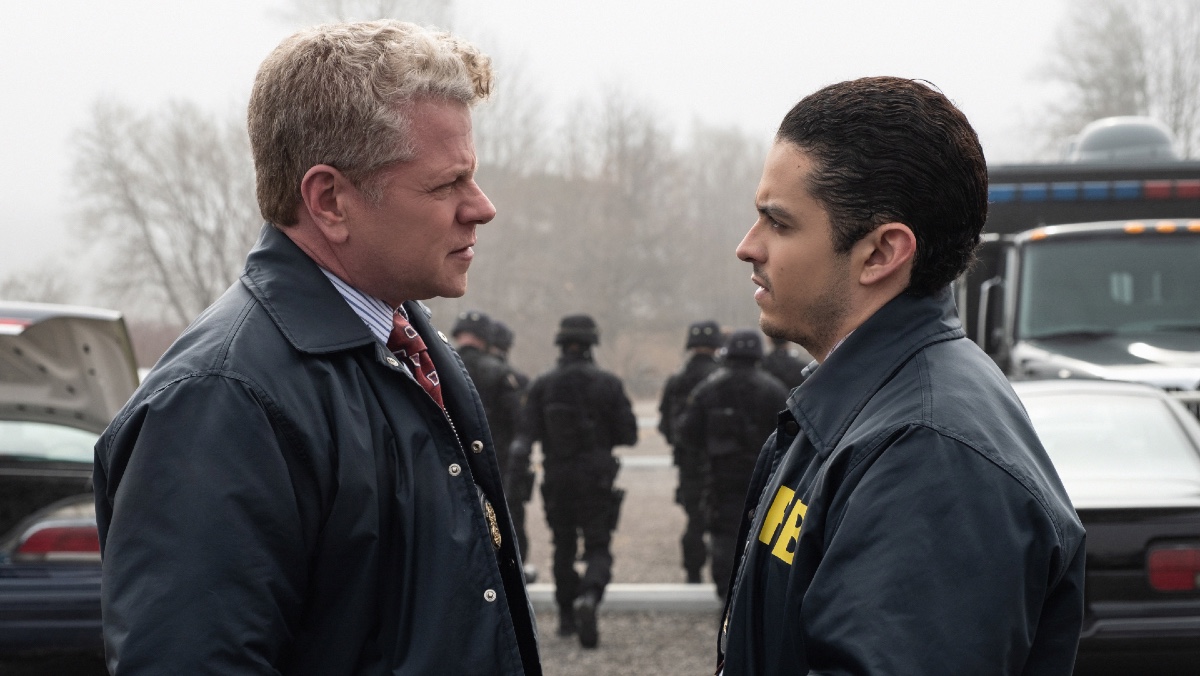 Clarice, episode 13, “Family is Freedom,” only closes some of the cliffhangers “Father Time” ended on.  We still don’t know whether Clarice Starling (Rebecca Breeds) will be reinstated into the ViCAP team, and we never find out what happened to young Clarice when her Sheriff father left her at the mercy of some pissed off criminals.

The last image we saw of that encounter, when Clarice ran it through her repressed memory bank, was a young Clarice with a gun held to her head as her father hangs his head in shame in the distance. The men who said they were cheated, and called Clarice’s dad a criminal and a coward, warned him he couldn’t hide behind his little girl. We never learn how that scenario plays out. How does she live through that incident to become the wild card federal cop she is today? The gang in the alley do not appear like they’re going to accept partial payment, and the implications are Clarice became part of a deal. But we don’t know and may not find out, as Clarice has not been picked up by CBS, and hasn’t officially been claimed by Paramount+.

This makes “Family is Freedom” the probable series finale, and for that Clarice really pulls out all the stops. The River Murders conspiracy Agent Starling forced the ViCAP team to investigate turns out to be something far worse than expected, the entire episode is action-centered, including the dynamics of every conversation, and one of the main cast gets shot.

The main setting is an exquisitely efficient horror house, and Alastor CEO Nils Hagen (Peter McRobbie), who runs it, is a monster whose deeds go far beyond the crimes of Buffalo Bill. The episode digs deep into the Silence of the Lambs subconscious to rework its iconography. The central location is an everyday nightmare: An animal research facility with its own rendering machine. This is a wonderfully horrific pairing. It screams “you really don’t get much more evil than this.” And then it does. It turns out the machines are grinding up the medical students Tyson (Douglas Smith) has been bringing over as part of his volunteer medical team. This means the meat being rendered is humanitarian cuisine.

The season villain is truly horrific, clicking so much more than the usual horror cliché buttons. Nils Hagen is a mad scientist from a long line of mad scientists. His grandfather weaponized chlorine during World War I, and in tender moments, the family posed deceased children in death portraits. “Memento mori,” as Agent Shaan Tripathi (Kal Penn) puts it, were all the rage at the turn of the century. But photogenic dead kids leave a strange legacy. Nils has been a chemist all his life, it is in his blood. He was born knowing there is no need for fire to get rid of the even the most seemingly damning evidence. Bleach and steam is enough during company sale time, because DNA breaks down at 400 degrees. He says it incredibly matter-of-factly, like the epitome of a psychopathic chief executive. But it is part of his collective unconscious.

It appears Tyson has been trafficking the students because he wants a brother. But all his father’s offspring turn out still born deformities. The students used for breeding are kept in pens, like lambs before slaughter, as if this isn’t going to trigger more memories in Starling. But she dips into her childhood trauma to pull out the idea of all the trapped animals rushing out at once. It is unintentionally funny when the person they run into is Deputy Assistant Attorney General Paul Krendler (Michael Cudlitz), and they knock him to the ground beating tiny little fists into his burly chest.

Just when you think the Hagen family have had their fill of bad blood, the evil father gives his prodigal son a tasteless choice. “This girl is here for you to kill so you can prove you are here for me,” Hagen says. But Tyson’s third option is no less terrifying, nor less psychopathic. He points out Clarice’s strength, her intelligence, he almost pulls her mouth back so Hagen can inspect her teeth, and basically says have at her. Go forth and multiply, I’ll get the jars ready.

Clarice weaponizes psychiatry with a magic bullet. She really gets into Tyson’s head, possibly taking tips from her therapist, Dr. Renee Li (Grace Lynn Kung). Clarice not only gets him to kill his own father but blow his own head off. It’s amazing what you can get away with when you turn in your badge to people who want you to keep it. Hagen was right to have his “first doubts.”

Every major player gets some kind of personal satisfaction. Agent Ardelia Mapp (Devyn Tyler) files her own paperwork, and doesn’t care who gets papercuts. At the outset of the episode, we learn she’s been told to remain in her departmental office, and will be terminated if she plays around with ViCAP. She gets to tell Krendler she’ll be suggesting where her boss can stick his desk duty.

Agent Murray Clarke (Nick Sandow) gets to visibly enjoy it. It may be his happiest moment of the season, and that includes the ending when he is wrapping his ViCAP jacket around a young medical student he helps save. Mapp is also allowed some follow through. She lay her case out straight succinctly, and Special Agent Anthony Herman (David Hewlett) runs out of facial expressions long before she finishes citing out the most grievous offenses. He, like Hagen, hits every button on the cookie cutter of bad men with powers: top cops. It doesn’t matter what Herman says, or what he claims to believe. He was doomed to one-dimension the moment his first word of dialog was keyed into the script.

Agent Esquivel (Lucca De Oliveira) takes strong-arming a witness literally, brother. He has the head of CSA Security Specialists cheek-deep in paperclips at his own desk before arriving at the ViCAP meeting in time to answer a question hanging in the air. The timing on the show is amazingly fortuitous. His entrance into the scene is plays like an old Courageous Cat and Minute Mouse bit. But there are so many moments which coincidentally happen to occur at the last possible moment. Krendler happens to call Attorney General Ruth Martin (Jayne Atkinson) about extenuating circumstances, just as she’s getting spit on by a House representative.

Congressman Llewellyn Gant makes a hard choice easier for Ruth. He tells her to step down, and take care of her daughter Catherine (Marnee Carpenter). The Attorney General responds by giving the go-ahead on an assault which may have been caused by an out-of-control agent who assaulted a civilian. She also begins an investigation on which politicians were getting funding from Alistor, so she gets to stick it to the man. The entire team gets the tell-tale mourning music moaning low as the victims are escorted to vans, and Krendler is loaded into intensive care.

“Family is Freedom” is exactly the kind of ending Clarice promised from the beginning. It went through the paces far too steadily to have any other outcome. The biggest break in protocol is how Clarice Starling took down the two main culprits without lifting a finger. She raised her voice a few times, but the only triggers she pulled were in the minds of her prey. The main character gets what she wants as well, everyone appreciates her, apologizes to her or gifts her with new beads. She even gets time to visit her mother. Clarice gets enough closure to close out the series.

PlayStation Should Make A Call of Duty Killer
Bridgerton Season 2’s Corgi is More Important Than You Think
Meat Loaf Should Have Had Two Parts in The Rocky Horror Picture Show
How Much Are The Biggest Video Game Companies Worth?
Link Tank: Will We Get a Mario Kart 9?