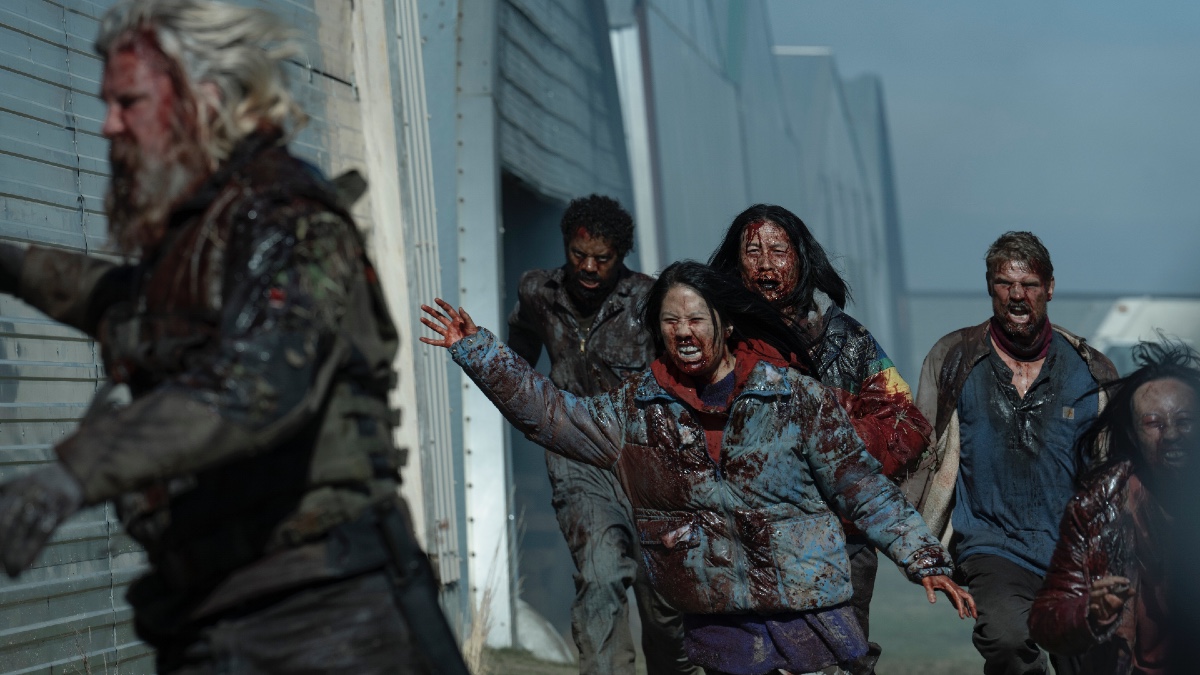 After a decade of The Walking Dead, Fear the Walking Dead, and The Walking Dead: World Beyond, I should be over the classic version of zombies. Most of the zombie media that have emerged from The Walking Dead’s long shadow have been things that have broken the mold. Anna and the Apocalypse is a coming-of-age musical. One Cut of the Dead is a heartwarming, hilarious take on what goes on behind the scenes of a movie set. Train to Busan adds claustrophobia to zombie proceedings, giving the survivors nowhere to run. Z Nation carved a niche for itself by having an actual sense of humor unlike the series it inspires.

So what makes Black Summer (which comes from the folks behind Z Nation) stand out as one of the best streaming horror shows? Like The Walking Dead, the human characters of Black Summer are both capable and dangerous in their own respects. Unlike The Walking Dead, however, Black Summer’s zombies remain the biggest threat. There is no sanctuary for the survivors in Black Summer, and even in the safest of situations, it’s only a matter of time before something goes wrong.

A fleeing survivor trips over a tree root, or their own two feet, and topples to the ground. The pursuing zombie falls on them, snarling and snapping. After an appropriate amount of MMA-style grappling, the survivor grabs a chunk of rock and with a well-aimed swing of the arm, smush goes the skull and the threat has ended. This is how zombie attacks typically play out on The Walking Dead. Other methods of establishing zombie danger include turning the undead into traps, or throwing walkers in bulk at the survivors and seeing whether that individual is overwhelmed.

Shooting at the charging zombie is easier said than done, since most characters (even with the aid of scopes), are trying to hit a fast-moving target. If the zombie reaches someone and they’re left with no other choice but to club them, it’s going to take more than one or two hits to put the zombie down; these are human beings, and human beings are tough to stop because skulls don’t magically stop protecting the brain from blunt force trauma at the moment of reanimation.

One zombie against one person isn’t a cakewalk; multiple zombies against one person tend to be a death sentence. These zombies don’t get bored and walk away from a feast; they batter defenses until they break through. These zombies do not limply slap at a piece of window glass, they smash through with full-throated fury, and they tend to be smart enough to work around obstacles in pursuit of their meal. Fireworks and thrown rocks don’t distract them; only another meal coming within earshot or a hiding place gives someone a hope of escape. If zombies or bullets take someone down, they don’t take their sweet time getting back up. A person goes from shot to zombie within their last heartbeat, so any gun battle or Mexican standoff has a tendency to get messy in a hurry.

The Walking Dead has given certain characters plot armor, ensuring they survive any number of difficult situations until the actor’s contract negotiations fall through or their arc is neatly resolved. Black Summer epitomizes drive-in movie critic/horror host Joe Bob Briggs’ main rule for a good drive-in movie: Anybody can die at any moment.

Throughout Black Summer, characters are built up as being survivors that will stick around for the long term only for them to be killed off. Other characters who seem destined for the scrap heap inexplicably survive, popping back up later or in different episodes. That unpredictability means that there is no chance for the viewer to take a breath, even when it seems like the characters themselves are able to slow down. Reuniting with an old friend from the before times is less a fun walk down memory lane and more like a tense feeling out process. A hot shower is less a soothing experience for a battered body and more of a moment of achingly painful vulnerability. Even a good night’s sleep only serves to emphasize just how bone-weary and vulnerable characters are.

The only character that’s safe, seemingly, is Rose (played by the brilliant Jaime King). With every close escape and betrayal she experiences, the character’s psyche only seems to grow more fragile. A respite from the outside world only heightens her paranoia and anxiety. Her safety isn’t due to plot armor, but due to her willingness to do anything necessary to survive, an attitude that only grows throughout Black Summer’s 16 episodes. She’s like a Terminator, with only one mission, and unlike Rick Grimes, all that high-minded stuff about building a new world never enters into her through process. Rose cares only about Anna (Zoe Marlett). Everything—and everyone—else does not matter. Friend or foe, Anna is Rose’s sole focus to the point of obsession.

The Directing of John Hyams

The material itself is nothing novel. It’s all stuff that’s been done before in various iterations; zombies are hard to have a fresh take on. However, where Black Summer excels is in the way it packages and presents these scenarios. It’s not your average zombie show shot with commercial breaks in mind. This is something designed from the ground up for streaming and binge watching, with a compulsive, theatrical energy that pulls the viewer into the story.

Most of the credit for that belongs to series co-creator John Hyams. Action fans will know that name from two of the best DTV action movies of the 2010s, Universal Soldier: Regeneration and Universal Soldier: Day of Reckoning. For those unfamiliar, the formalist Hyams style is instantly recognizable and sets a tone for the series from the opening moments of the first episode. Hyams deals in long single “oner” takes, with an active, participating camera that puts viewers in the middle of the action. The camera will track actors moving through a scene for minutes at a time, then have them stop to deliver dialogue or perform some specific actions, then go back to moving without any visible cuts. Expository scenes may feature one actor speaking to the camera, uninterrupted, for pages at a time, or multiple rack focus shifts between two characters in the midst of fraught conversation.

The long takes feel deliberate and thoughtful, and when combined with heavy use of deep staging give scenes a woozy, dream-like state. Spoken lines are given time to breathe, to build, and the minimal score is just enough to tickle at the edges of perception and ramp up the inevitable tension that comes with someone not responding to a conversation cue. The violence, when it comes, tends to be sudden and shocking, shattering the ethereal tableau.

If a less nihilistic Michael Haneke did a zombie movie, it would feel a lot like Black Summer. It has enough action to satisfy die-hards, but it’s more than just titillation. The tension is aggressive, the fear real, the emotions bigger, and the characters more realistically broken than anyone from Robert Kirkman’s comic book adaptation. Even from the outside looking in, Black Summer gets under the skin in a way most other zombie media doesn’t. Survival is the goal, but the cost is higher than anyone could imagine in a world where death and life hinge on the pull of a trigger.

Black Summer seasons 1 and 2 are available to stream on Netflix now.

Is the World Ready for a 3-Hour Batman Movie?
Peacemaker Episode 4 Review: The Choad Less Traveled
Sci-Fi Short Film “Iteration 1″ | DUST
The Power Rangers Episodes That Will Make You a Fan
How Much Are The Biggest Video Game Companies Worth?