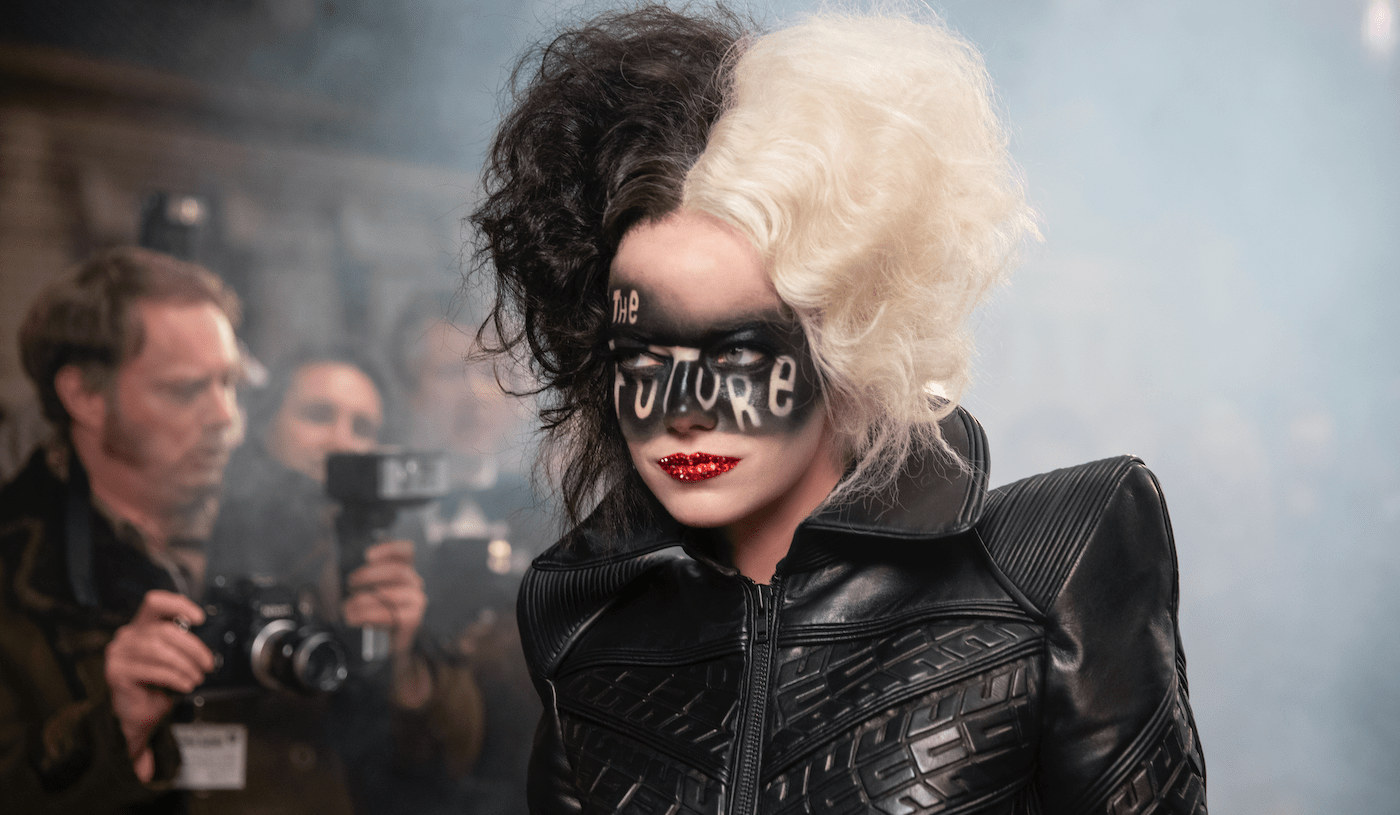 One of the most infamous villains in Disney’s storied history is Cruella de Vil, the wickedly evil heiress and socialite who obsessively wanted to make a coat from the fur of puppies in 1961’s One Hundred and One Dalmatians. Based on a novel by Dodie Smith, the animated classic introduced Cruella as a fully formed monster, intent on skinning all 101 of the title Dalmatians for her own personal luxury.

Cruella became such an instant symbol of vanity, greed, and malevolence that she has appeared in the decades since in a number of animated and live-action sequels and spin-offs, with Glenn Close most notably playing her in two live-action films in 1996 and 2000. But with Disney in recent years launching a successful series of live-action prequels and remakes based on their iconic animated films, such as Maleficent, the studio decided the time had come to explore Cruella’s little-known background.

The result is Cruella, in which Emma Stone plays the title character. Left to her own devices very early in her life, Cruella—or Estella as she is originally known—is a London street thief who dreams of becoming a fashion designer. She falls under the mentorship of the narcissistic, cruel Baroness von Hellman (Emma Thompson), a prestigious designer who recognizes Estella’s talent. But their relationship turns to rivalry and more as a deeper connection between the two comes to the surface.

Cruella is directed by Craig Gillespie, who has been specializing in toxic relationships lately with 2017’s Oscar-nominated I, Tonya and the upcoming Pam & Tommy, about the turbulent love affair between Motley Crue drummer Tommy Lee and Baywatch star Pamela Anderson. Each are period pieces as well, and with Cruella, Gillespie takes the origin story of a classic villain and turns it into a sly satire on the fashion industry set in the chaotic yet liberating milieu of London’s 1970s punk rock scene.

While the film does not redeem Cruella’s later evolution into pure villainy, it does provide a backstory that makes sense, and one which Gillespie was happy to talk about with Den of Geek.

Den of Geek: How did you envision this when it was first presented to you?

Craig Gillespie: It’s interesting. [Disney president of production] Sean Bailey called me and he said, “Hey, what do you think about Cruella with Emma Stone set in 1970s punk London?” That trifecta for me, I was like, “That sounds amazing.”

Then I got the script, and it was beautifully written and it was a great sort of journey with all of these milestones and turns, but tonally, it didn’t have the… For me, I have this sensibility that I love being in this dance between humor and drama. That was the place that I feel like I can really excel. So that’s what I was looking for and I needed to bring to it.

Visually I had a very quick response, just from that headline that Sean Bailey had given me, and I was already doing a deep dive into that era with photographs of the time at King’s Road and Notting Hill, and the squatters and just the club scene. It’s just such an incredibly rich backdrop to work with. So I was compiling that, and the show was going to this very sort of gritty, dark, authentic place, and very quickly I just fed that to every production head as they came along. So visually, I got that, and I just needed to make sure we could get it attitudinally, like in the script with the characters and the music.

One of the things with these sorts of origin stories is the idea that we know what happens to the character down the line. So what’s the key for you to getting around that and creating a story that’s still compelling?

You know she’s going to live. Outside of that, I don’t really know much else about Cruella. It’s crazy. There’s no backstory. As we started to delve into it, okay, so when she was five, she went to school with Anita Darling, she was married to a furrier and she wanted a Dalmatian for a coat. That’s about the extent of her backstory, and I kind of loved that we had so much freedom with that. It gave so much license to really create our own persona. Then we started getting into the themes of what we could say about nature versus nurture and suppressing your true self. Then it got really interesting about how to bring that to life. So it was a really fun journey to go down.

You mentioned that the London punk era was already present in the script. Did it become even more present as you worked on it with your production and costume designers?

Yeah, absolutely. Just the visual research that Jenny Beavan did for costumes and then Nadia Stacey did for the makeup and the hair design—I think everybody got really excited about that era. And then just from a story standpoint, it’s like I really wanted to lean into these events.

I was particularly drawn to [designer] Alexander McQueen, which is obviously not that era, it’s the ’90s, but his attitude and his relationship with the press and with high society was… I saw a lot of parallels with Cruella’s attitude and the way that he would do these fashion shows that were deliberately confrontational. So that inspired me more with the pop-up fashion moments that she would have where she would sort of jump into these red carpet events and in these very aggressive ways. So we started heightening all of that and it all just kept building.

Were there any ideas that you considered and ultimately discarded? Anything that was just either too crazy or just didn’t work?

Disney was incredibly supportive. There was a scene where she’s breaking her friends out of jail and originally I’d conceived it that she takes her car and drives that in, but there were all these conversations about that car and needing it later on and this and that. I’m driving to prep one morning, and I go, “She’s used that garbage truck before. Let’s just have her drive that garbage truck in there.” We did a whole police chase with a garbage truck. There wasn’t really anything we said no to.

No. I’ve got to say I’m incredibly fortunate that this kind of is my director’s cut, and the same with I, Tonya. Disney had some great notes along the way, and it just became the best version of the film in my mind. I mean, literally outside of a few jokes in the final act and a 30-second scene with the Baroness and Estella, nearly everything’s in the movie.

This movie kind of dances in between the raindrops of different genres. Were there any films that you looked at for any particular inspiration?

Well, the interesting thing is, even though there are a lot of visual effects, it’s almost the invisible type. We didn’t have a 25-minute massive CG battle at the end of the movie, or fairies and princesses and characters that can transform. There’s no visual feast that way. So I was like, “What can we do that as a genre that can really keep people engaged?” And that was the heist genre for me.

So the one thing I did go back and look at is heist films, and in particular Ocean’s 11, to really sort of break down how much the audience actually needs to know about what’s going on. Are they ahead of the heist or behind it? All those kinds of questions came up. So that was a fascinating study for me.

How was it working with the two Emmas in this film?

The most exciting part to me was always those scenes with the two of them. And those things got elevated with Tony McNamara’s writing. He added in a lot more opportunities to put those two women together and go head-to-head and really enjoy their performances and the complexity of their performances. There’s a lot of humor going on, and there’s a lot of heavy topics, as well as drama.

They’re such versatile actors that they can do that dance in the scene between the humor and the drama. It was something I really knew I could lean into with them and Tony’s writing. It was candidly something that, on the page for Disney, sometimes felt a little flip or aloof—they weren’t sure, like when you were talking about a mother’s death, that you could have any humor in that scene. I knew that with these actors that they could do that nuance so beautifully that it would just elevate all of it. They were using that humor in a way to deflect the pain, and it was really exciting to see them do it.

It’s a bit darker than you expect for a Disney film.

Yeah. It was really exciting that they were so supportive of that. There were a few times where they would say, “Maybe shoot some kind of alt [version] as a safety,” but to their credit, they really leaned into all of the darkness.

It’s amazing. It’s such a fun experience, and they’re such phenomenal actors and the prep they’ve done to get into character has been incredibly impressive.

Cruella is out in theaters and also available on Disney+ via Premier Access.