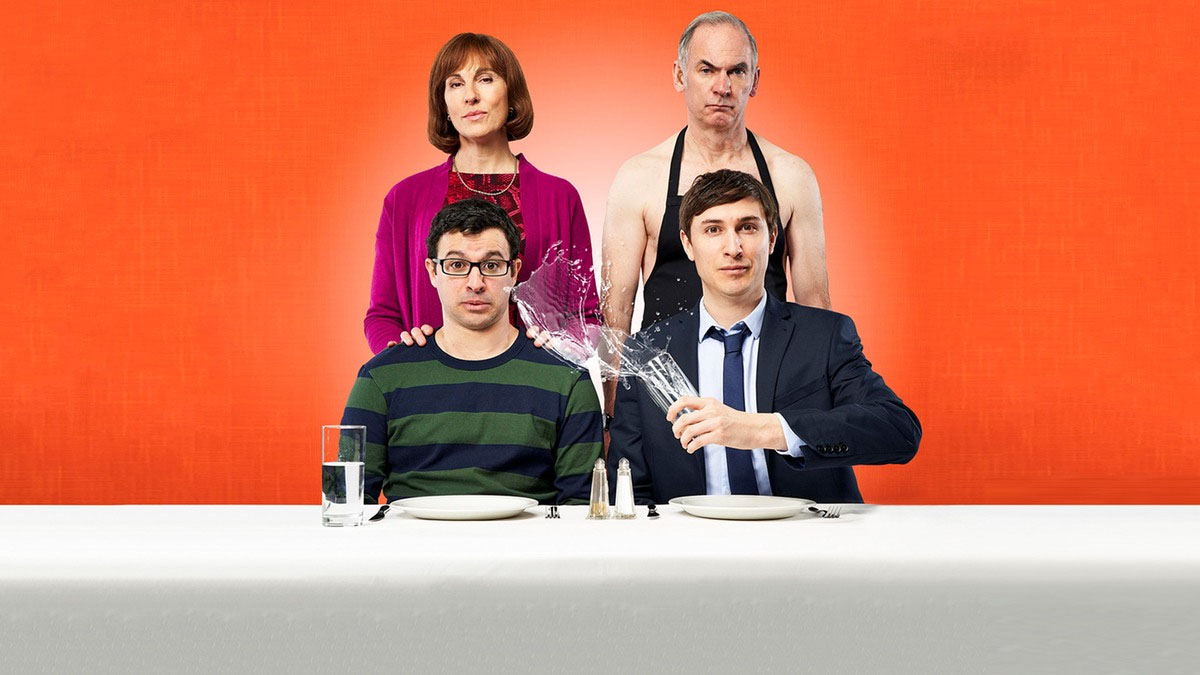 That’s ten years of crimble-crumble, humble bumbling, manic misunderstandings, and more lovely bits of squirrel than you could shake a dead fox at. For thirty-seven Friday nights across six glorious seasons the Goodman family – shirtless dad, Martin (Paul Ritter); long-suffering but ever hopeful mum, Jackie (Tamsin Greig), and their visiting prank-wanker sons Adam (Simon Bird) and Jonny (Tom Rosenthal) – served up a banquet of laughs to a hungry nation, ably assisted by chronically persistent, reality-adjacent next-door-neighbour, Jim (Mark Heap) and his faithful dog, Wilson, and a host of other regulars and monstrously memorable one-offs besides.

In celebration, then, of one of the most smartly-observed, perfectly-cast comedies of recent years, in chronological order, we count down ten of the show’s best.

Most first episodes – nay entire first series – of new comedies can be scattergun. Maybe the characters haven’t quite coalesced, or their fictional universe doesn’t feel ‘lived in’ yet. Not so with Friday Night Dinner. The show arrived fully-formed, with the Goodmans seeming as real as any family in your street; perhaps even your own family.

All of the gags, rituals and dynamics destined to run and grow and fold back in upon themselves throughout the series’ run are here: Martin’s secrets, conspiracies and hearing difficulties; Jim’s constant interruptions; Adam and Johnny’s brutal one-upmanship; the salt-in-the-water prank; Martin’s fondness for shouting ‘shit on it’.

The first episode revolves around the selling of a sofabed (with a brief sojourn into conspiracy when Martin inveigles his children into helping him hide the old magazines Jackie has ordered him to destroy), a simple enough transaction that turns to tragedy when death comes (quite literally) calling. Martin’s mis-hearing and misunderstanding of a crucial piece of information whilst standing at the bottom of a stair-and-couch-based conga line brings the series first proper belly-laugh, and with it the realisation that Friday Night Dinner is going to be something special.

Mr Morris, played by Harry Landis, is a marvellous comic creation. With his predilection for getting topless and dressing people down at the dinner table, he’s like a malignant, mirror-universe version of Martin. With the eyes of Mr Magoo and the moustache of Adolf Hitler – and something of the bearing of both – Mr Morris, Granny’s new and very married boyfriend, quickly establishes himself as the dinner guest from Hell.

After crashing into their house and blaming them for the damage, the pugilistic, preening, proud, petty, and pretty much certifiably insane pensioner goes on to engage in horrendously public displays of affection with Granny; shout angrily over the phone at his 95-year-old wife; make Adam and Johnny pay for the, well, johnnies he later planned to use on their grandma; accuse Adam of sexual assault, and then challenge the whole household to a half-naked fist fight. Just another Friday night at the Goodman’s.

‘Mouse’ marks the first time that Jim manages to get his feet under the dinner table of the Goodman home, and it’s everything you could have hoped for. And more.

Normally the family manufactures its own chaos during the weekly meal – with extra helpings of misunderstandings, feuds, schadenfreude, embarrassment and horror – but here the Goodmans are cast as the straight men to Jim’s one-man reality-wrecking crew. While interpersonal connections and rituals are alien to Jim, the Goodmans’ set of mannerisms and catchphrases are his greatest challenge yet. His interpretation of their Jewish faith is equal parts sweet to absolutely bonkers, and only Jim’s anxiety, eagerness to please, incomprehension, and molten naivety keeps things from becoming insulting.

All of the Goodman rituals to which the viewer has become accustomed rain down on Jim in a hail of friendly fire, leading him to gargle on ‘Jewish water’ and scrutinise his dinner plate for hints of squirrel. The moment where Jim briefly considers whether he should eat the episode’s eponymous mouse as it scurries onto his dinner plate is pure comedy gold.

This episode features the first appearance of Rosalind Knight as Martin’s mother, or ‘Horrible Grandma’ as she’s known to the family. Christmas is supposed to be a time of peace and celebration, but that’s not an easy ask when your guest of dishonour is a terrifying little lady who’s equal parts Livia Soprano to the Shushing Library Spook from Ghostbusters. Very few Christmases contain the line, ‘Thanks for raping our grandma’s dog on Christmas day’, fewer still see a grandson sharing his grandma’s dog’s oxygen mask, but then nobody does Christmas like the Goodmans. And they’re not even supposed to be doing it.

There’s a surprisingly beautiful moment at the end of this episode, courtesy of resident oddball, Jim, that – like all of the other rare occasions on which the show veers towards sentimentality – is quickly undercut by a well-timed, and very welcome, gag.

Adam finally meets his match: an eight-year-old girl who blackmails him into a chaste but never-the-less irritating and inappropriate ‘relationship’ following the discovery of a racy, unsolicited picture of his girlfriend’s sister on his phone, while his girlfriend is there at the Goodman house for dinner. Thus unfolds an evening of unusual foot-washing, forced transvestism, secrets, lies, panic, and a stunning coup de grace from Jonny, who helps put the final nail into the coffin of his brother’s fledgling relationship.

Martin likes to squirrel away a great many things, many of them ridiculous, most of them out of sight of his wife. But Johnny and Adam probably weren’t expecting to discover a dead fox in their father’s chest freezer, much less find themselves enlisted to help move it around town like a hitman’s hairy bounty until the heat died down long enough for their father to have it stuffed. The funniest thing about Martin’s many hare-brained (or, in this case, fox-brained) schemes is the energy he throws at them, the sort of logistical chicanery seldom seen this side of the CIA. Watching the men of the family toddle around hither and thither with a dead fox, hiding it in the dining room, hurling it in cupboards, wedging it through windows, is exactly as funny as it sounds, and – as always – just when you think Martin’s got away with it… he hasn’t.

Martin is an exceptionally quick-thinker. Unfortunately, his speed of thought is seldom married with precision, and he usually finds himself blurting something out at the start of an evening and spending the rest of that evening teetering on the edge of oblivion, with his long-suffering wife ready to push him off. His blurt-out in ‘The Two Tonys’, though, is perhaps his most desperate and ill-considered. In a bid to encourage Jason Watkins’ Tony – a loathed associate from years ago Martin had invited to dinner believing him to be another, better Tony – to leave the Goodman home, he forces Jackie to go along with the ruse that her mother has just died. This gambit, like all Goodman gambits, backfires spectacularly, and what follows is a farce worthy of Frasier, everything culminating in a desperate chase and the furious weaponisation of a pineapple.

Friday Night Dinner deals with death incredibly often, and incredibly well, wringing joyous laughter from that most terrifying and inevitable of our shared fates. Here we have another delicious dose of Horrible Grandma, who’s in town to lay to rest her dear departed brother, Saul. Martin is pressured into giving Saul’s eulogy, even though he never really knew or liked his uncle all that much. Cue a day of stress, arrests, tense stand-offs and tantrums, ending with an uninvited Jim appearing at Saul’s graveside clutching four black balloons, while Martin proceeds to recite Saul’s death certificate in lieu of a proper farewell. Immediately following a Grand Prix-inspired coffin malfunction, Jim’s dog Wilson enters stage-left to put a necro-quasi-cannibalistic spin on the ending of Todd Solondz‘s Happiness.

Horrible Grandma might make for a terrible dinner guest, but she makes for a perfect guest star. This time, we bid her goodbye for good, but not before a great deal of caustic put-downs, cathartic showdowns and perhaps the funniest, most macabre magic trick of all time, courtesy of resident ‘magician’ Jim.

‘Females’ wasn’t intended to be the final episode of the series, at least according to comments made by series’ creator Robert Popper immediately following its transmission. And it still might not be the end. But it’s hard to imagine a better, funnier or more touching swan-song for the show, with or without the tragic death of Paul Ritter.

Adam and Jonny finally have ‘females’ (as their progressive dad has always called their prospective girlfriends) in their lives at the same time, and Jackie is overjoyed to be welcoming them into her home. She thinks the evening is going to be perfect, which is rather naïve of her considering that she’s married to Martin.

Sure enough, Martin manages to contaminate every course of the meal with shards of broken glass, a calamity he’s forced to reveal to everyone but Jackie, going on to enlist their help in somehow preventing the matriarch from choking to death, while simultaneously preventing her from discovering the depths of his dangerous ineptitude. Martin is, of course, thoroughly rumbled, but before Jackie can strike him down with great anger and furious vengeance, two pregnancies are announced in quick and joyous succession.

‘Females’ is solidly, classically funny, but it’s the episode’s smaller, more intimate moments that will linger longest in the imagination: the brothers’ new-found, prank-less affection for each other; the subdued but sincere affection between Jackie and Martin as they discuss their new roles and the future; and the now suddenly larger Goodman family dancing as one in the living room. As codas go, it’s a damn near perfect one.

If Friday Night Dinner comes back, let it be in twenty years when Adam and Jonny are middle-aged. For now, I hope Martin gets to enjoy many long years as a granddad.

Friday Night Dinner series 1-6 are available to stream in the UK on All4 and Netflix.