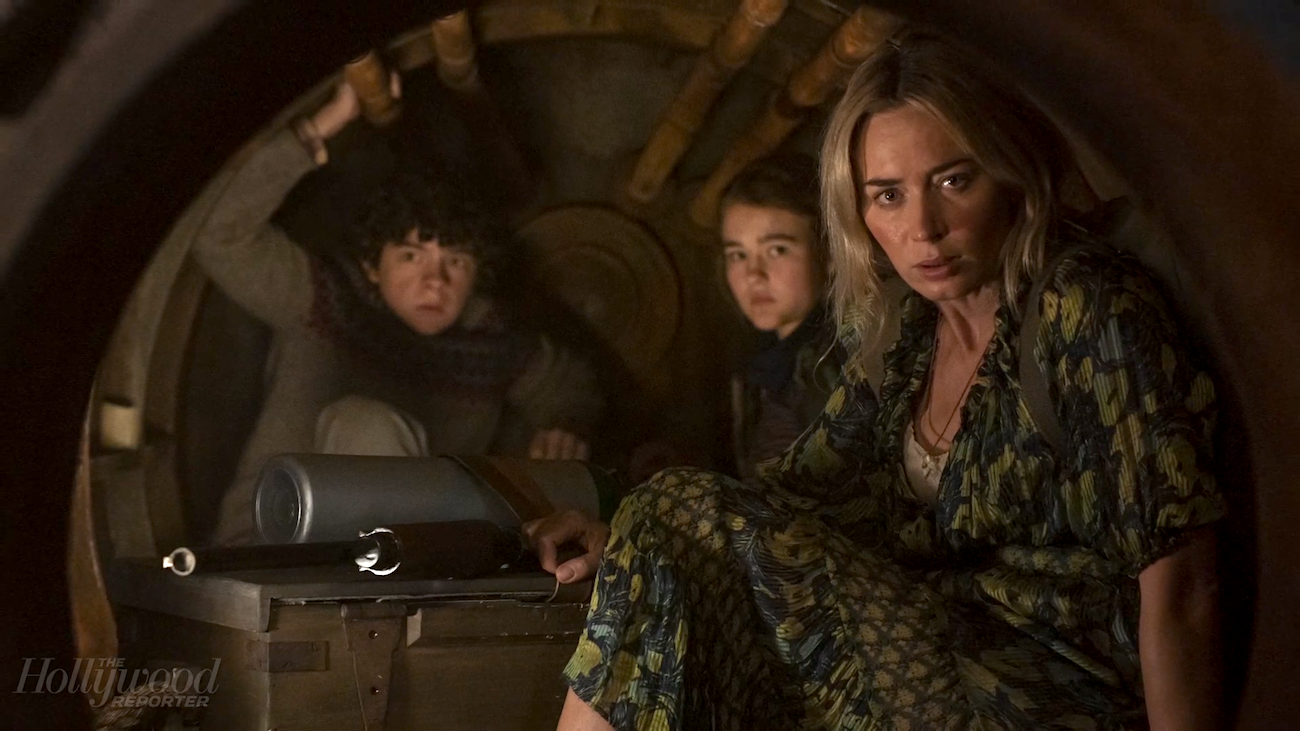 John Krasinski’s follow up to his breakout horror hit A Quiet Place was due to hit cinemas in March last year, before COVID hit and took out the cinemas with it. But now A Quiet Place Part II has finally arrived on the big screen and it’s a noisier, more action-packed offering than the last. Picking up the morning after the first film ended, Evelyn (Emily Blunt), Regan (Millicent Simmonds), and Marcus (Noah Jupe), with the new born baby who they keep in a box, have to abandon their destroyed farmstead and head into the world looking for other signs of life. Before long they find Cillian Murphy’s Emmett, a man ravaged by tragedy and who needs coaxing back from his enforced isolation—which happens after he is forced to embark on a mission with Regan.

With Marcus’s leg severely injured by Emmett’s bear trap, Evelyn needs to find medical supplies to stop the wound from getting infected, thus leading to a plot structure which sees three separate groups (Marcus and the baby, Regan and Emmett, and Evelyn on her own) experiencing different kinds of peril concurrently. It’s a smart move: not only does it keep the audience in a constant state of anxiety worrying about what’s going to happen to one party or another, but it also marks the movie out as significantly different to the first film.

A Quiet Place Part II doesn’t feel like a ‘same again’ cash in. Rather it’s a smart continuation of the family’s journey and a look at how the world has evolved since the initial invasion (we begin with a flashback to day one) with an ending that mirrors the end of the first A Quiet Place.

At Emmett’s place, Regan gets a signal on the radio—it’s the song “Beyond The Sea” By Bobby Darin playing on a loop. Though Emmett insists it’s nothing, Regan works out that it’s actually a message and the signal is coming from an island. She plans to walk to the coast, find a boat, and sail out there, taking her hearing aid and amp with a view to broadcast the frequency out on the radio and incapacitate the creatures wherever the station is tuned in.

Marcus is badly hurt, so can’t go with her, and though he begs her to stay, she goes alone. When Evelyn discovers her daughter is missing she implores Emmett to bring her back. Emmett reluctantly agrees. But when he finds Regan, she refuses to return, berating him for being less noble than her father. He changes his mind and decides to help. As the two approach the dock where they plan to steal a boat they are attacked. Not by creatures this time but by humans living in the marina. This lot seem to have taken the invasion really badly and have become feral, attacking Regan and Emmett and attempting to rob, and possibly kidnap, Regan.

But Emmett signs to Regan to dive into the marina while he attracts the attention of the creatures, causing carnage and havoc. The boat people are killed but Emmett and Regan survive, with Regan’s hearing aid intact. They make it to the island. There they find an idyllic community—the creatures can’t swim so the island is protected. They’re saved!

Only they’re not. One of the boats the creatures attacked back on the mainland has drifted out to the island with a creature on board. It attacks and kills many of the islanders (including Djimon Hounsou’s character, who with Emmett and Regan attempts to lure the creature away from the community, by driving to the radio transmission tower honking his horn). It’s a race against time for Regan to set up the broadcast with her hearing aid without being killed by the creature and Emmett is there to help…

Marcus and the Baby

Left behind when Evelyn goes to the chemist for supplies to treat Marcus’s leg, Marcus is  charged with taking care of the baby. He’s a nervous kid and his injury doesn’t help. Though Evelyn has promised she’ll only be gone a couple of hours, Marcus is anxious and ventures out of the bunker to look around, leaving the baby in the box with the oxygen mask. Exactly what Marcus is looking for is not 100 percent clear—this is perhaps an incidence of a ‘he needs to venture out of the bunker for plot reasons’ and just leave it at that.

He discovers the corpse of what is presumably Emmett’s wife, is startled, knocks something over, and attracts a creature. Diving back inside the bunker, Marcus shuts himself and the baby inside the furnace where they are protected. But when Marcus shut the furnace door the towel preventing the latch from locking slips off. They are trapped inside the furnace and running out of air, and there is only a tiny amount left in the oxygen canister…

Venturing out to get supplies for Marcus from the chemist (the same chemist we see in the first film, it should be noted), Evelyn first stops on the bridge where the shrine to the son they lost to the creatures at the opening of A Quiet Place still stands. It’s a small memorial which now also includes a picture of Lee (John Krasinski), her late husband. It’s a quiet moment she takes to grieve her loss (timeline wise, Lee has only been gone a matter of days). It’s an important and significant moment for Evelyn. She has had to become impossibly stoic since the invasion, losing a child and a husband, and giving birth to a new baby in this new world. She has no space to scream or cry but instead she leaves her wedding ring on the shrine.

After getting some supplies from the surprisingly well-stocked chemist, including two new oxygen canisters, she returns to find a creature has infiltrated the bunker. Will she make it past the creature and open the furnace in time to prevent Marcus and the baby from suffocating to death…?

Although A Quiet Place Part II sets up three high-stress situations, in many ways it is a safer, gentler film than A Quiet Place. Though all of the main characters are in danger in the run up to the conclusion, do we really think Marcus and the baby are going to suffocate to death? Is there any chance heroic young Regan and her new found father figure Emmett are going to fail? Does anyone think for a second Emily Blunt is actually going to get killed? The answer is no, all round.

Evelyn makes it to Marcus and the baby in time, opening the door to the furnace so he and the baby can breathe, she then drags a fresh oxygen canister inside. But how will they escape with the creature raging outside…?

Back on the island, Regan has managed to get the broadcast up and running, sending out the signal from her hearing aid. Back in the furnace, Marcus, trusting his sister, puts on the radio and hears the signal, knowing she has been successful.

On the island, the creature is stunned by the noise and reveals its weak spot. Regan attacks and kills it with a pipe. Meanwhile Marcus, holding the radio, exits the furnace leaving his mother and the baby in safety. Finally finding his confidence, he approaches the stunned creature and shoots it.

In a reversal of the first film which saw parents go to any lengths to protect their children, AQPII sees the next generation save the day. It is Regan’s intelligence, determination, and bravery that may be the key to humanity finally being able to defeat the creatures, and ultimately it is she who saves Emmett.

While at the end of A Quiet Place, it is Evelyn who wields the gun to protect her family, now it is Marcus’ turn to protect his.

It’s an ending full of hope. The island is once again free of creatures. There is a chance that things could return to a semblance of normality, and it is the new generation who has grown strong and resourceful during the worst of times who will now take the lead. It’s a perfect ending for a film which essentially bookended the pandemic in its original release date (March 2020) and it’s eventual one (May 28 2021).

A Quiet Place Part II is out now in cinemas.