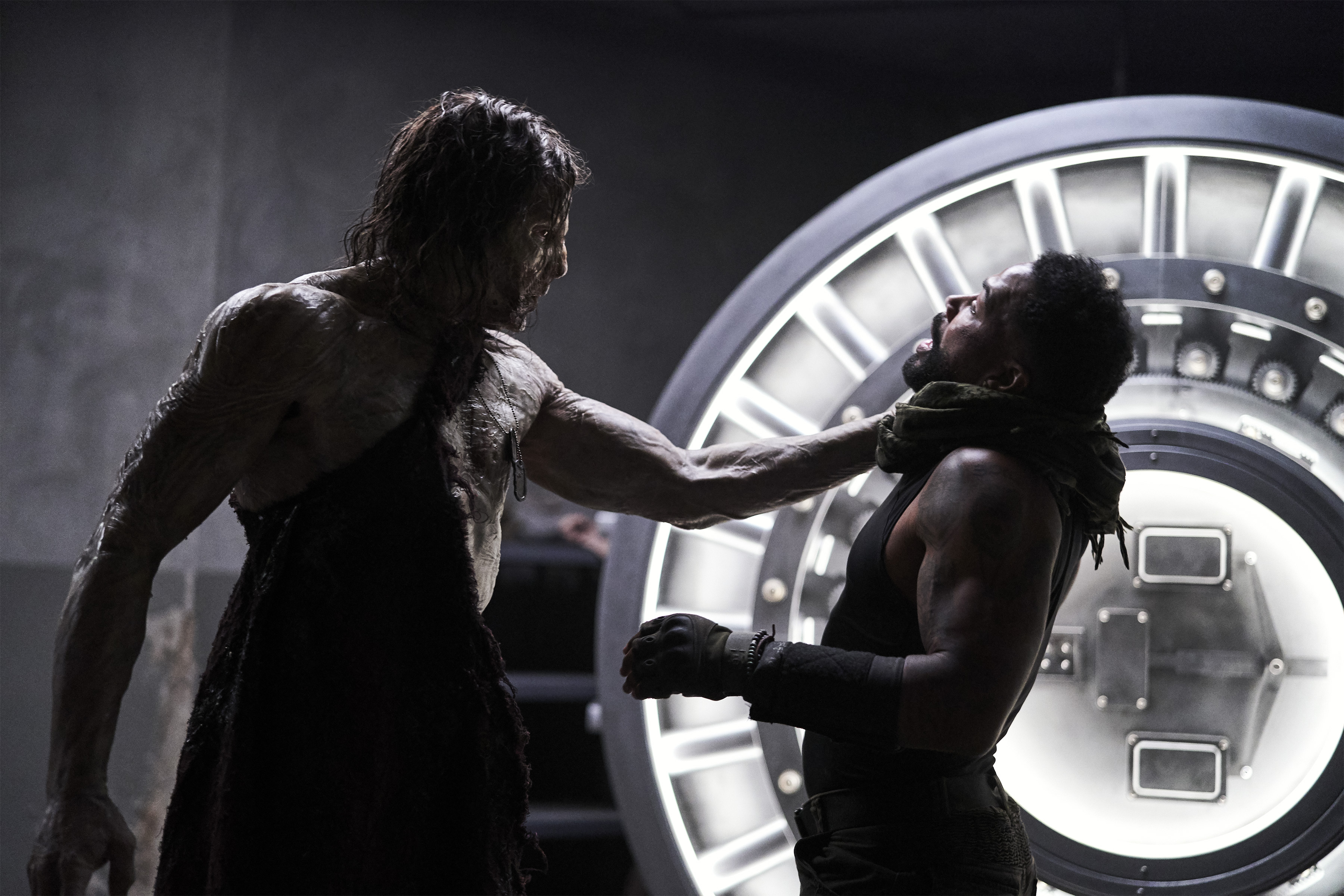 It’s not a subtle image. But then who comes to a Zack Snyder movie for that? During the bloody and marvelous opening credits to Army of the Dead, the alpha zombie they call Zeus (Richard Cetrone) earns his nickname while staring up at a statue of the ancient Greek god of thunder in front of the fictional Mount Olympus hotel and casino. Our Mr. Zombie+ may not be an actual god, but one alpha can clearly recognize another’s game, and as we eventually learn, “Zeus” will make the Greco-Roman themed high-rise his home in the months to come.

Olympus is again the seat of power for those who seek to rule over all.

Such is our early introduction to Snyder’s update of zombie lore in Army of the Dead, the filmmaker’s second zombie movie after his debut film nearly 20 years ago, the Dawn of the Dead remake (2004), and his first original project since 2011’s Sucker Punch. Obviously, Snyder is still playing with genre in his new undead adventure, embedding a heist movie into the trappings of a more traditional zombie survival horror. However, the closer one examines the zombie hierarchy of this new movie, the more evident it is that there’s little you could call “traditional” about Zeus and his brood.

“I think the conversation I was starting to have with myself is: What will people allow in this genre of film?” Snyder told Den of Geek earlier this month about Army of the Dead. If audiences are receptive to the film, the answer will be a lot since Snyder’s movie seems to suggest zombies can be highly intelligent, successful at problem solving, and even in some ways more evolved and egalitarian than us. And if they can ever get outside of the ruins of Las Vegas… they really might just be the new gods of this world.

Of course on paper, the idea of a “smarter zombie” is not entirely new. The grandfather of our modern conceptualization of zombie lore, George A. Romero, even began toying with his image of mindless undead shamblers with his third zombie movie, Day of the Dead (1985). In that film, a zombie they call Bub is trained to solve rudimentary puzzles and even use a gun by humans; he then develops affection for the scientist who taught him. Romero further built on the idea in Land of the Dead (2005) when a zombie nicknamed “Big Daddy” leads a pseudo-revolution by organizing fellow walkers to storm Dennis Hopper’s high-rise citadel of power.

However, both those films, particularly Land, were far more intrigued with the allegorical aspects of the undead workers of the world uniting, as opposed to deepening the definition of a zombie itself. Big Daddy and his cohorts represented the “have-nots” of capitalism and 20th century geopolitics, with Hopper’s character a thinly veiled caricature of then-U.S. President George W. Bush (he is killed by oil at the end of the film).

Other fictions have also somewhat explored the idea of an intelligent zombie, but it’s always been in a format meant to feed into other genre tropes, like the romantic comedy in Warm Bodies (2013) or high fantasy in Game of Thrones. Still, Thrones is probably the best comparison to what Snyder is going for in Army of the Dead since the White Walkers (or “Others” in George R.R. Martin’s novels) are the top of a hierarchical food chain with the ability to magically command the more mindless Wights. They even kept pets like undead horses and bears—which is not dissimilar to Zeus’ own undead mount and tiger in Army of the Dead.

Nevertheless, the White Walkers are essentially a fantastical catchall for any force of nature (or inescapable death) that overwhelms and obliterates the petty grievances of man. Hence the countless think pieces about the Night King being the harbinger of climate change. By contrast, “alphas” in Army of the Dead are not allegorical creatures at all. They’re envisioned to be the next step in evolution among the undead and (perhaps) humanity as well.

We don’t technically know where Zeus comes from in this story. There’s some cheeky lip-service paid in the cold open about the zombie king hailing from Area 51, yet these details are intentionally left vague and dubious. The point is that he was in the military’s custody and they rather hilariously lost control of the zombie. Now every person he bites becomes an alpha—which is odd since it raises the question of where the traditional walkers came from if Zeus is the proverbial Patient Zero of the zombie outbreak.

Be that as it may, after the new normal sets in around Vegas, we learn Zeus rules on high from Olympus, sending out his zombie tiger as if it were both a hunting dog and a herald to announce his power. And his elected ruling class of zombies have developed the ability to communicate and barter with the living humans who occasionally slip into their domain. We learn from Lilly (Nora Arnezeder) that she only successfully ferrets materials in and out of Vegas by sacrificing “shitheads” to her alpha zombie gods. And when she feeds one such sexist pig to the alphas, Zeus’ zombie bride (Hera?) communicates with the humans through a series of vocal cues, making it clear she accepts that these mouth-breathers are buying safe passage.

Which raises the question: just how smart are the alpha zombies in Army of the Dead?

The answer appears to be very. Zeus is able to organize his fellow alphas into an army that attacks in waves, like the Night King in Game of Thrones. Yet each alpha appears to have its own personality and ambition. They are not extensions of his will, but creatures with their own individual thought processes—they just fear the real alpha among them. Maybe this is the only element of allegorical heft in the film, since Zeus has organized zombie society around a group of powerful producers who take what they want through virtue of their talent (the alphas) and a bunch of underachiever shamblers who don’t complain about getting scraps. One even wonders if there’s an undead Atlas to shrug among Zeus’ cohorts?

In any event, Zeus is able to problem solve enough to build a seemingly magic helmet that no high-powered bullet can penetrate, thereby protecting his sensitive brain tissue, and he can strategize how to lead an assault with both alphas and shamblers. Most importantly though… he can grieve.

In another significant departure from typical zombie fiction, Zeus procreates in this film the old-fashioned way. His new species still increases its numbers via zombie bites. Yet Zeus and his proverbial bride also conceive a child who is still in utero when she is decapitated. Zeus is able to be anguished by the desecration of her body (and later her final death), and he can be outraged by discovering his zombie child died for realsies in utero.

We have seen “zombie babies” and zombie children before, including in Snyder’s own Dawn of the Dead remake. But we have never seen zombies conceive a child, which seems to suggest zombies can actually age and grow in this universe. After all, the baby Zeus and his lover intended to birth could grow from an apparently zombified embryo, so can Zeus and his minions grow older themselves? Zeus’ hair certainly grows out over the length of the movie.

In which case, are the alphas in Army of the Dead really dead at all? In a biological sense, yes. Their hearts stop beating and they can apparently take any form of punishment except a bullet or blade to the cranium. In a philosophical sense, however, the differences between the living and the dead appear to have become moot. The alphas can procreate, strategize, and build a society of their own.

As even Lilly says, this isn’t their prison; it’s their kingdom. A realm for a new species that in some ways is an improvement on ours. For starters, they are a lot harder to kill. Zeus’ lover is outright decapitated and her head’s still going. But, on a more serious note, they also display fewer deficiencies of character. If Martin (Garret Dillahunt) hadn’t screwed over his compatriots to get to the roof alone, most of the cast of characters in Army of the Dead would’ve survived. In a plot point straight out of James Cameron’s Aliens, at least the alpha zombies aren’t “fucking each other over” for a percentage.

Additionally, the alphas can overtake entire communities in the span of a few days. If not for the wall erected by humans during the movie’s opening credits, North America would be swarming with zombies. So, in a way, putting Zeus down at the end was the best thing our heroes could’ve done for their obsolete species.

But—as teased by Vanderohe (Omari Hardwick) surviving just long enough to get out of the irradiated ruins of Vegas to notice his zombie bite—life, much like death, will find a way. And among the alphas, those distinctions are becoming almost meaningless.