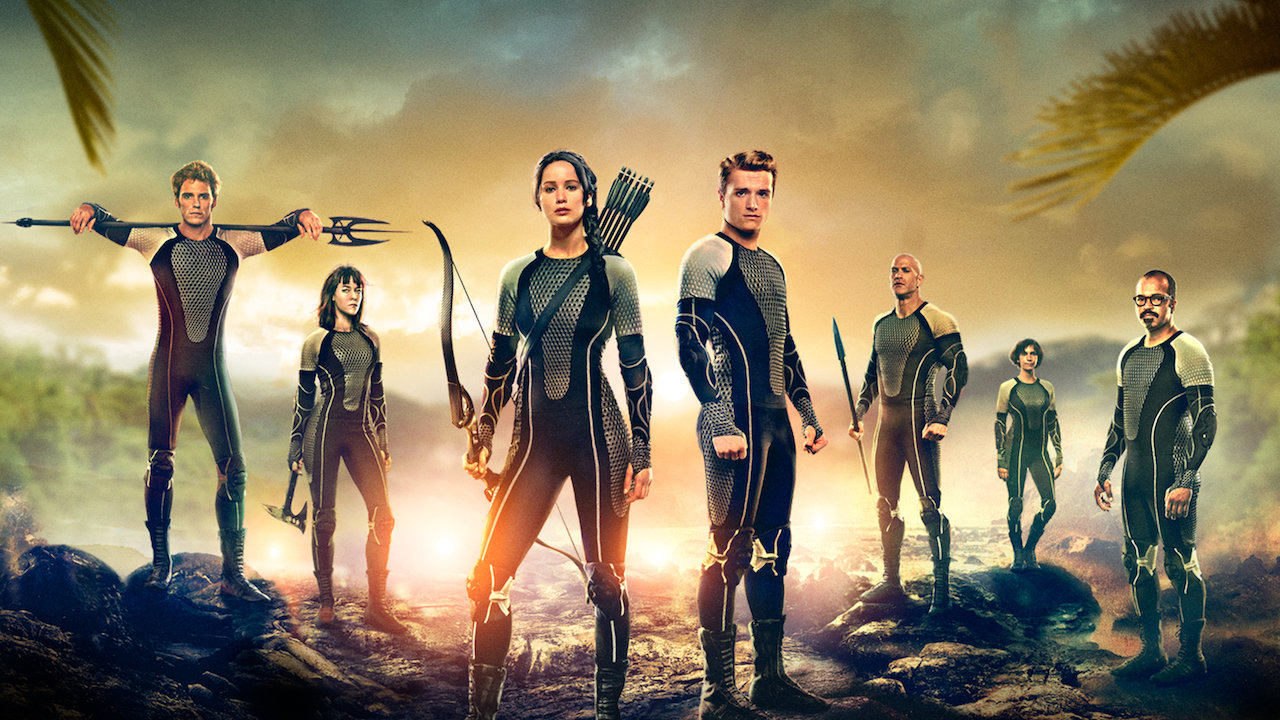 The Hunger Games is the first book in a trilogy of dystopian YA novels by Suzanne Collins, that were adapted into a four-film series, with the third book being split into two films. The story follows Katniss Everdeen (Jennifer Lawrence), who volunteers for the annual battle royale, the Hunger Games, after her sister Prim’s name is drawn. Like the gladiators of old, Hunger Games tributes are compulsorily drafted to fight to the death in dangerous arenas, for the amusement and appeasement of the masses. The games are both a reminder and a warning to the people of Panem to stay in line and what happens when you don’t.

With the Hunger Games series, Collins was looking to explore some themes of revolution, depicting the games as a political arena as much as a literal one. We see this depiction of the Hunger Games as a tool of political control ramp up in the second book/film in the franchise. In Catching Fire, President Snow wants to reassert control over the games, and make a statement to the people of Panem, so the 75th Hunger Games—the third Quarter Quell—only pulls tributes from the existing pool of winners. Everyone who participates has already survived—and killed—before. In Catching Fire Katniss and Peeta train and form alliances with other victors as they formulate a plan to survive (or not) in the arena.

As the book progresses, it becomes more and more apparent to both Katniss and the reader that many of the veteran victors heading into the games are not necessarily there to score a victory of survival but rather a political win that could further the growing, Panem-wide revolution against Snow and his cronies. With that in mind, we’re taking the time to rank the Hunger Games victors’ winning methods, from most to least provocative. Who wins the Hunger Games when the goal is not solely survival, but also making a political point?

Mags (Lynn Cohen) was the first winner from District 4. She participated in the 11th Hunger Games, the first year they instituted the Victor’s Village. Her exact method for winning is unknown, but she was adept at with a fishhook, and weaving baskets, and likely used both (fishing) skills to secure her victory. She was a mentor to District 4 tributes and was close to Finnick. She volunteered for the third Quarter Quell in place of Annie Cresta, who is Finnick’s true love. Finnick wept when she died by going into the fog so that Finnick could save Peeta. Recognize a real g when you see one.

Like many of the tributes of the 75th Hunger Games, Mags was drawn into a political fight she didn’t sign up for. Once Snow broke the rules by reaping victors, he invited the very defiance he hoped to suppress.

Johanna (Jena Malone) wins the 71st Hunger Games by pretending to be weak, so that other tributes ignore her while they take one another out. She viciously kills the remaining tributes, once the field is narrowed down. Her win was sound, and probably due to her popularity after the games, Snow wanted to prostitute Johana. When she refused, her family was killed as punishment. By the time of the third Quarter Quell, she is openly defiant of Snow and the games. She is angry, and she is vicious, and all the other tributes know to watch out for her.

Wiress (Amanda Plummer) and Beetee (Jeffrey Wright) are career tributes from District 3, the district responsible for Panem’s technological achievements. They formed an alliance with Katniss in the third Quarter Quell. Betee won his original game by setting electrical traps around the arena for his opponents. It’s never stated how Wiress wins her game, but it wouldn’t be a leap to guess that she outwitted the other tributes. She is the one who realizes the arena is a giant clock, which is pivotal to the allies survival.

Snow doesn’t appear to have a specific gripe against Wiress and Beetee, they are just casualties in his vendetta against Katniss. That said, choosing to reap previous victors and not fully recognizing their capabilities is a choice that comes back to bite when they break out of the arena.

Finnick Odair (Sam Claflin) is a career tribute from District 4, the wealthy district on the water known for fishing. He won the 65th Hunger Games at the tender age of 14, making him the youngest victor in history. Finnick is described by Katniss as being very handsome, and that coupled with his flirtatious personality caught the eye of wealthy sponsors who sent him gifts throughout the games. One such gift was his signature trident, which is fitting. Finnick appears to be modeled on the Retiarii, who were scantily clad Roman gladiators, who fought using fisherman’s tools—weighted nets, daggers, and tridents. Finnick, like the Retiarii, won his game by using nets to ensnare other tributes, and finishing them off with the trident. After his win, he was prostituted by President Snow, before being reaped into the 75th Hunger Games, alongside Mags, who volunteered in place of his true love, Annie Cresta.

Finnick won his game fair and square, but he was aided by donors who made the arena less treacherous and thus easier for him to survive. This doesn’t break any rules but it does limit some of the control the gamemasters have. Being well-liked has its advantages in the game, and being a popular victor means having a platform. This would threaten President Snow, as a popular victor who spoke ill of the games could change the sentiment of the games.

Haymitch Abernathy (played by Woody Harrelson in the 4-film adaptation) was the second victor from District 12. He participated in the 50th Hunger games, the second Quarter Quell. He had an early advantage in the games by surviving the cornucopia bloodbath and coming away with a knife and backpack of supplies. He took down a few career tributes and was almost killed, but was saved by fellow District 12 tribute Maysilee Donner. They formed an alliance until they separated—not wanting to kill one another. Maysilee was attacked by vicious bird muttations, and Haymitch held her hand as she was dying, the same way Katniss did with Rue. Haymitch discovers the force field surrounding the edge of the arena, when he kicks a pebble at the cliff, and it bounces back. In his final knock out drag out with the District 1 tribute, he leads her to the arena’s edge. She throws her axe at him, he dodges, and the axe rebounds off the force field and hits her in the head instead. She dies, leaving Haymitch the victor.

While not an obvious or even deliberate act of defiance, using the arena’s force field this way goes against the intention of the gamemasters, who provide all of the tools inside the arena for tributes to use. Plants, bodies of water, and everything inside the arena is deliberately placed. The force field is a barrier, it isn’t meant to be acknowledged, and certainly isn’t meant to be interacted with. It shows that the gamemasters aren’t in control of everything, which shows weakness.

Like with Katniss and Peeta, President Snow doesn’t take kindly to Haymitch’s stunt, and has his  entire family murdered as punishment. It’s hard to pinpoint what President Snow hates more, victors that come from poor districts or victors who win by outsmarting the gamemasters. What does seem clear is that Snow despises anyone or anything he can’t control. And winners who subvert the game in any way are punished in ways both obvious, and insidious.

Katniss and Peeta won the 74th Hunger Games, becoming the first duo victors, and only the third winners from District 12. Katniss survived the arena through her finely honed archery skills and her alliance with Rue, before she was killed. Peeta allied with Careers—tributes who train for the games—then turned on them. He also used camouflage skills, which gave us this gem.

After making it to the final two, and beating out District 2 career tribute Cato, the two refused to kill one another when the rules allowing for two victors was revoked. They each took a handful of deadly nightlock berries—which killed District 5 tribute Foxface—and threatened to swallow them, which would leave the game with no victors. They were both allowed to win.

Their win broke the established rules at the time, never mind that the rules had already been changed. Katniss and Peeta refusing to kill the other openly defied the gamemasters and President Snow, and they would pay the price for it. Snow strongly suggested they play up their romance during the victory tour, so the audience would see their defiance as an act of love for one another, not rebellion against the Capitol. He also decided the next Hunger Games, the third Quarter Quell, would only reap—involuntarily conscript— past tributes. This guaranteed Katniss would enter the games again.