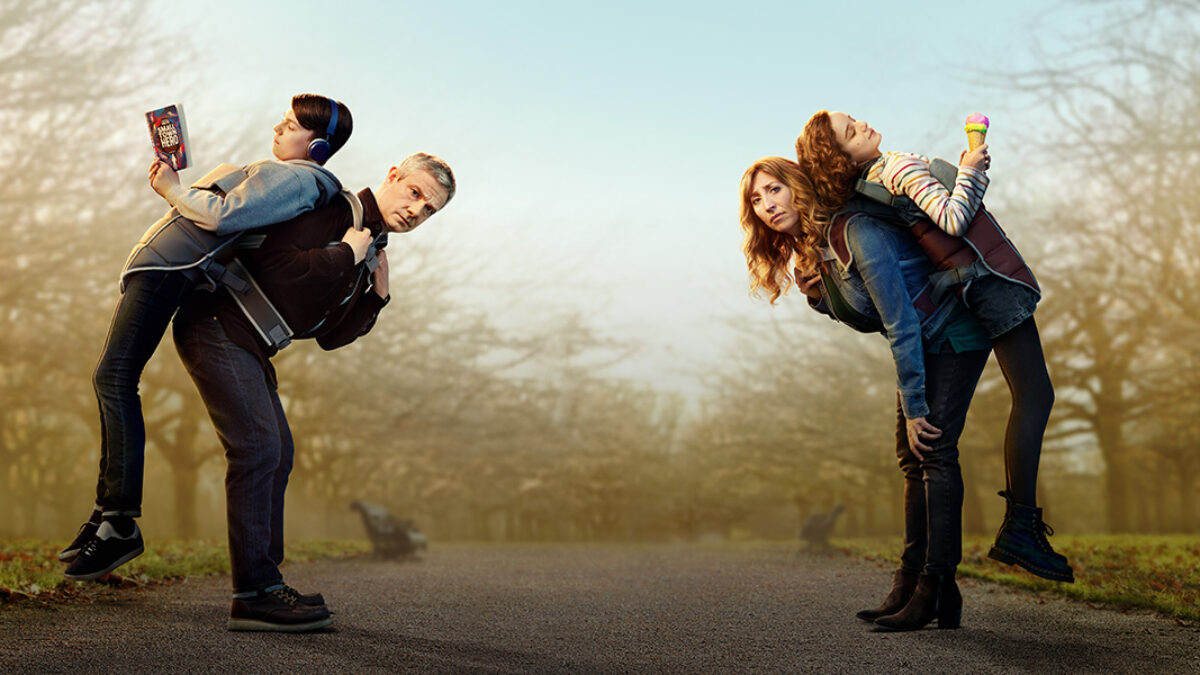 Philip Larkin put it memorably, but there’s no need to take his word for it. We all know that characterful noses aren’t the only things carried down the generations. There are also the traits that no parent means to pass on: insecurities and neuroses absorbed in daily doses from age zero to left-home, that leach out involuntarily to our own kids when the time comes. For Martin Freeman’s character Paul in FX/Sky One comedy Breeders, it’s his anger and anxiety, inherited by son Luke (Alex Eastwood), and threatening to break their relationship.

The Breeders season two cliffhanger sees Paul voluntarily move out of the family home because Luke refuses to live with him. Partner Ally (Daisy Haggard) doesn’t want Paul to go, daughter Ava (Eve Prenelle) doesn’t want him to go, and Paul definitely doesn’t want to go, but it’s the only answer. From a generation better armed with the vocabulary to express feelings than their parents ever were, Luke has identified that his sadness and anxiety peak in proximity to his dad’s rage. He can’t live with him and be happy, but is too young to move out, so Paul’s the one to go.

It’s an emotionally bruising ending to a truly affecting series, not least for the bedtime phone call Paul takes from Ava telling him that she misses and loves him. (A comedy ringing with honest emotion but allergic to mawkishness, Breeders doesn’t end on the call from Ava, but undercuts the seriousness by having the excellent Alun Armstrong as Paul’s dad swear at the broken toilet flush in their cramped flat.) What’s most bruising is that the ending confronts the little-acknowledged truth about parenting that love is far from all you need.

Paul loves Luke, and knows that Luke struggles with loneliness and anxiety, but that doesn’t stop him from becoming enraged by his son and saying things that make their relationship worse. Season two’s penultimate episode led to a dramatic climax when Luke – now 13 after a six-year time jump between seasons – punched Paul in the face. After Luke broke the rules of his punishment by chatting with his friend online, Paul verbally exploded and Luke ran away. When they reunited, instead of having the heart-to-heart that most dramas and pretty much all comedies other than this one would have written for them, they fought.

The two-part season finale written by showrunner Simon Blackwell and directed by Ollie Parsons, is titled ‘No Power’. That’s both in reference to the electricity shortage that precedes Paul and Luke’s clash, but also presumably because of Paul’s powerlessness to change either his or Luke’s behaviour. He rages and Luke flinches, then lies to dodge another verbal bashing. When Luke’s lie is discovered, the cycle starts again. The two characters uneasily circle the family planet on separate orbits, unsure of how to get back on a shared path. Briefly, they come together over a shared love of two-tone music and fashion, but just as quickly drift back to opposite sides.

The sad truth of it is summed up by Paul’s mum Jackie (the brilliantly funny Joanna Bacon), who tells Paul that he and Luke are very similar. She’s absolutely right. Piece together what the series has told us about Paul as a teenager, and there’s a real overlap. An overwhelmed Luke spends his free time alone at the boating lake; Paul spent his weekends alone at the local park taking photographs of birds. Luke is on medication for anxiety; Paul was on beta-blockers during his A-levels.

Paul wants his son to be like him in his music and fashion tastes, but refuses to accept the parts of Luke that remind him of what he sees as his own failures – his lack of friends in comparison to the outgoing, popular Ally, and his inability to control his moods. Paul also fails to see his own hypocrisy for berating Luke for planning to buy weed with a mate, when just an episode earlier, Paul and his friend were taking coke at a gig. That all of this emotional truth can play out alongside a running stream of great one-liners is testament to the strength of the writing and of the cast, led by Freeman and Haggard, who are totally bilingual when it comes to comedy and drama.

It’s a painful finale that leaves a season of comedy on bravely uncomfortable ground, but there may yet be hope for the split family in a potential third season (being planned for but not yet officially announced). After the bloody nose incident, Luke moves in with Ally’s mother Leah (Stella Gonet) and helps her new husband Alex (Hugh Quarshie) to refurbish a vintage car. “The thing about an engine is,” he tells Luke, “if you take it apart, and then put it back together again in the right way, carefully, precisely, it’s guaranteed to work.”

A family isn’t as predictable as a car engine, but perhaps Alex’s words are intended as reassurance to viewers that after being taken apart, as long as Paul and Luke are put back together in the right way, carefully, precisely, there’s every chance they could work again.

Breeders airs on FX in the US. Season two starts on Sky One and NOW on Thursday the 27th of May in the UK.

You Season 4: What to Expect
The Outsider Season 1 Episode 8 | AfterBuzz TV
The Batman – Official Trailer | DC
Why Spider-Man: No Way Home is the End of an Era for Tom Holland
Is The Batman Adapting Hush?