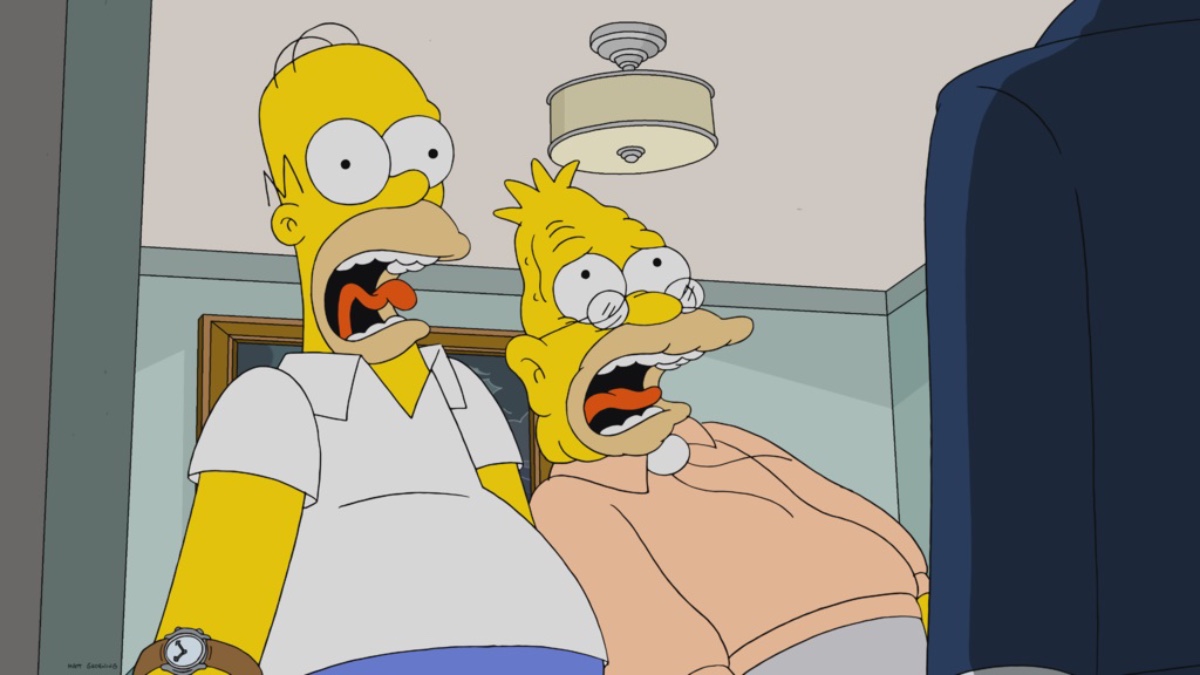 Abe comes in from the cold on The Simpsons Season 32, episode 21, because it’s cold. “The Man from G.R.A.M.P.A.” is a tepid espionage chiller about an increasingly insignificant spy, but a room with a working window at the Springfield Retirement Home lies in the balance.

The episode opens with the uneasy soundtrack of intrigue as the titles tell us we are in London in 1970 at the office of the MI5. The British spies are toasting their youngest and brightest star, Terrance, voiced by Stephen Fry, who also voices the Head of the MI5, and will go on to voice his own father and daughter. He is that kind of spy, an Englishman unafraid to dress in drag. His then-most recent operation in Prague only left 11 dead, which for British Intelligence is barely a parking ticket. His new assignment is to catch a Russian double agent, code named Gray Fox, who has infiltrated a nuclear plant in America. The agency doesn’t have much on the target except he was a member of the Flying Hellfish during World War II. They were the only unit to engage the enemy at the European Theater, the Pacific Theater, and Grauman’s Chinese Theater.

All of the Simpsonized short-cut references work to establish the premise and weight of international espionage. They’re all easily accessible cliches. The spies also get in a little dig about how every single nuclear plant in America has bad security, and admit nobody knows what fortnight is. This paints a laughably passable picture of the Gentleman’s Club of British espionage. It is all tied together with references to Carol Reed’s The Third Man. Besides giving an excuse to let Orson Welles (Maurice LaMarche) finish his wine before getting on a boardwalk Ferris wheel, this is an odd choice. The 1949 British film noir film was set in Vienna, which is as far removed from Springfield as Terrance’s mark is from reality.

“Old Man Yells at Cloud,” reads the headline which gives Abe away, 50 years later. The eldest Simpson is less-than-blissfully ignorant about everything that’s been going on in the spy game. To be fair, this is the way he is about everything. He is dealing with a more immediate problem. Louise, who had the best room at the nursing home and hated his and everyone else’s guts, has moved on. She’s not dead, it is sadder, she is moving back in with her children, a nightmare for the elderly caretakers.

Abe has a consistently ambiguous relationship with both the nursing home and Homer on the series. It provides some of the most insightful revelations about Homer’s dad. At one point in the episode, Abe asks Homer to prove he cares by naming the two things which scare the father. Homer says Nazis and cocktail olives. This is pretty specific, but Abe says that’s not good enough because that’s everyone’s secret fear, especially since the olives look like they have eyes.

Terrance has Homer at “drinks and pretzels,” and manages to keep him through several increasingly faster renditions of “The Road to Tipperary.” Terrance wins over the rest of the clientele of Moe’s Tavern by offering free drinks to listen to his life story. Even Barney’s AA sponsor can’t pass that one up. Moe puts in an amazing behind the bar performance, his dark ale is really brown water, and it comes in a lite flavor. He also proves a mean hand at shadow puppetry. Terrance winds up having a sad backstory. Born in Bristol, he only became a spy to redeem his father’s name. The segment on how Terrance’s father sullied the spy business is very low key and intentionally anticlimactic, but his expulsion is a moderately funny sight gag.

It’s kind of sad how quickly Homer embraces the awful truth Terrance has about his father. Some of the evidence makes sense. When Terrance asks what Abe did for a living, Homer says he doesn’t know. We, the audience, remember Abe was a watchman at a cranberry silo for 40 years, and was able to afford his house because he won on a crooked 1950s game show. He also got paid by the Krusty the Clown show for telling a cat and mouse what to do. None of this really gets him off the hook. Homer begrudgingly admits how Abe hates both political parties, says “Grand Canyon” sarcastically, and thinks “The Star-Spangled Banner” is too hard to sing, but all that is as American as Apple watches. This all works as a skewering of American values because it only twists the most superficial pop culture.

Yes, Abe is a member of the Stonecutters, the Masons, the Communists, and president of the Gay & Lesbian Alliance, but a Russian spy? The proof is damnably circumstantial. Abe was spotted eating red onions and drinking Moscow Mule. He got a dishonorable discharge from both the Navy and Amazon Prime. When you put this together with how Homer not only got hired at a nuclear plant, but has kept his job after several careers’ worth of screw ups, it’s enough to make anyone wonder, is Grampa even his real name? Plus, Terrance can do a killer impression of Winston Churchill, and when he curses in a Scottish accent it sounds like a letter from home to Groundskeeper Willie. When he points out Abe is making a dead drop, we have to believe him because we learned the phrase on The Americans.

Grampa’s explanations are the high point of the episode. Peaking at how he walks away with someone else’s Jell-O two times and day and isn’t even supposed to eat Jell-O. He calls his Canadian blood pressure medicine maple serum, which works as about as well as a band named the B Sharps, it gets less funny each time you say it. Abe and Homer truly bond when they are locked in the trunk, and not only because of the twine. Homer promises that, if Terrance makes him dig his own grave, he’s going to do an awful job.

The Simpsons is getting too soft. Everyone does the wrong things for the right reasons. Abe effectively accepts his place as the Gray Fox in order to assuage Terrance’s murderous delusion so he can watch Fox News until his brain turns to an angry mush. If only Grampa didn’t go off on a tangent, he and Homer might have gotten away. Fare thee well, indeed.

Poor Grampa. Some might see Abe as an allegory for the long-running series itself. He’s been around so long he’s constantly reinventing the past in order to stay relevant. Not only in the present, but in both future episodes and episodes about the future. Do we indulge The Simpsons? Probably as much as we indulge Abe, whose endless ramblings occasionally go somewhere unexpected, but only because they get lost along the way.

The Simpsons should let themselves get lost again. They stay too focused and too slick. “The Man from G.R.A.M.P.A.” feels like the kind of movie Homer would fall asleep at. The British spy film references come too respectfully, and the laughs have to squeeze through too stiff an upper lip. It’s not that it’s too clever, as opposed to funny, which has plagued some episodes. It pulls its punchlines when they should be hot enough to cut 007 to a size .035.

Young Justice Season 4 Episodes 1 and 2 Review: Phantoms Starts Strong
The Walking Dead Season 9 Episode 2 Review & After Show
Doctor Strange 2 and More MCU Movies Delayed: What Do Those Release Date Shifts Really Mean?
The Beatles: Get Back Reissues Set the Stage for Mop Top Comedy
Superman is Bigger than The American Way: A Better Tomorrow for the Man of Steel Awaits