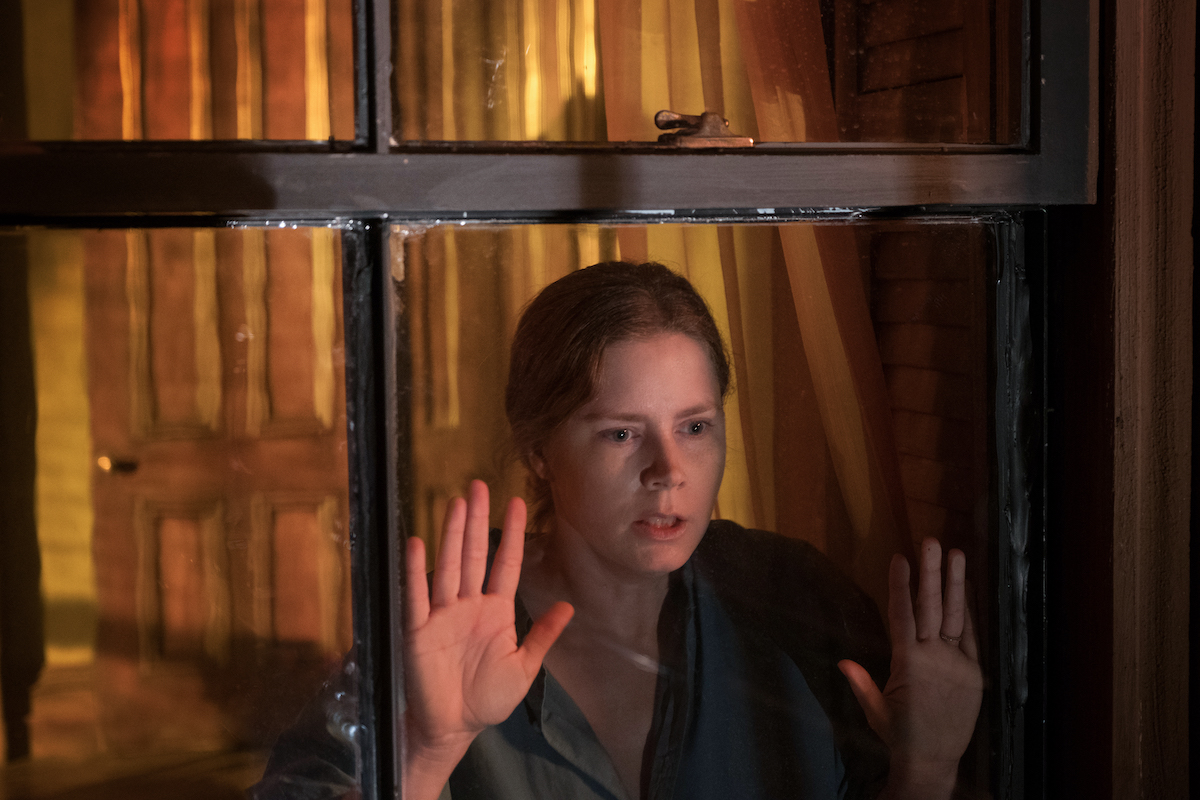 This article contains The Woman in the Window spoilers.

Twisty-turny thriller The Woman in the Window has arrived on Netflix with some distinct Hitchcockian vibes. It’s based on the bestselling novel by A. J. Finn and directed by Joe Wright (Atonement, Anna Karenina, Darkest Hour), with Amy Adams as the titular woman.

This is classic high-concept crime drama in the style of Gone Girl and The Girl on the Train while the premise is reminiscent of Rear Window. Adams plays Anna Fox, an agoraphobic woman who believes she has witnessed one of her neighbors being murdered in her own home, which she views from out her window. But something odd is going on here. The murdered woman – if she even exists, is not who Anna thinks she is. Is her tenant to blame? What’s going on with the 15-year-old who lives across the street? And why is his dad so aggressive?

These are just some of the many questions that may occur to you as you are following the labyrinthine plot of The Woman in the Window.

In case you missed a bit, we break down that ending.

The first big revelation that’s key to the plot is that the woman Anna meets on Halloween night is not Jane Russell – that’s just an assumption Anna makes. As you will recall, Anna goes to her front door to shout at some kids who are throwing eggs at her house but, overwhelmed by her agoraphobia, passes out. At the door is a woman with long blond hair (Julianne Moore) who helps Anna. Anna assumes she is Jane Russell because the woman says she has just come from across the street, and because previously Ethan (Fred Hechinger), the 15-year-old kid who lives at that address, brought round a lavender soap which he says is a gift from his mother. Anna has done some research on the Russells and knows a bit about them but not what they look like.

This woman – who we discover later is called Katie – spends the evening chatting and drinking with Anna. Though Katie initially questions being called Jane (“why would you assume that?”), she later draws a picture for Anna and signs it “Jane Russell.”

Later that night Alistair Russell (Gary Oldman) comes to the house and asks if anyone from his family had paid her a visit that night. Anna lies (or thinks she’s lying) and says no, because Katie (who she thinks is Jane) has indicated that Alistair can be rather rigid and controlling (which he can). Alistair is not looking for Jane – the real Jane (played by Jennifer Jason Leigh) is presumably at home. Instead he’s after his son, who presumably has had some contact with Katie – his birth mother.

We learn that Katie is Ethan’s birth mother. When she was eight months pregnant she left Alistair and disappeared. He spent two years looking for her, eventually finding her in a “meth commune” at which point he took Ethan, and Katie went to prison. Since then the family has been hiding from Katie – only recently had Katie discovered they had moved to Brooklyn and Alistair had been paying her to stay away from her son.

Katie spends the night with Anna’s tenant David (Wyatt Russell), who says she is a bit of a nightmare. He goes to spend the next night on a mate’s sofa so as to avoid seeing her. She leaves her earring in his room.

What’s David got to do with things?

Poor old David. What we make of this character will depend somewhat on how reliable a narrator the film is as well as how reliable Anna is. Initially David seems to be an essentially nice, friendly chap, a singer-song writer who does odd jobs to make ends meet who lives in Anna’s basement and offers to help her out occasionally. Anna is fairly frosty towards him – she is fairly frosty in general – but likes him (we learn, via a conversation, in her head, with her dead husband – more on him in a bit).

David does some work for Alistair Russell but doesn’t meet Jane. He also borrows a boxcutter from Anna when he’s helping a mate moves some boxes. David shows a much darker side when he finds Anna in his room uninvited, holding his post, including a letter which indicates he’s on parole and in violation of that. David says it’s because of a bar fight. He gets aggressive with Anna and is mocking of her agoraphobia. If this is real, he’s not a good guy. But Anna has changed meds and been drinking on the meds and is susceptible to paranoia and possibly hallucinations – just because she really did see Katie get killed does not mean the rest of her view isn’t skewed.

When Anna has a melt down she tells the police that David should be in prison, that he has a history of violence and accuses him of the killing. Anna has also been sent a picture of herself sleeping which David couldn’t have taken – he has a solid alibi for the night it was taken. After that, unsurprisingly, he decides to move out. On the night Anna is planning to kill herself she is waiting for David to get the rest of his stuff before she does it. In the video she makes by way of a suicide note she makes it clear he hasn’t nothing to do with her death. But before he arrives she finds the photo with Katie’s reflection in the wine glass. When David sees it he identifies her and is able to explain who she is to Anna. However he refuses to go to the police with her.

Turns out that was a bit of an error. Later that night David gets stabbed to death by Ethan.

That would be Ethan. Ethan, it turns out, is a serial killer in the making. His first experience was with his father’s previous assistant Pamela Nazin who fell to her death from her sixth floor unit. Did Ethan push her? Not entirely clear, but he was definitely there when she died. Ethan reveals that it took her a full five minutes to die and watching her pass was a big part of the thrill.

Ethan then kills Katie, witnessed by Anna. We would assume that Alistair, and possibly Jane, are aware of this and send him away to something called The Wilderness Programme in New Hampshire which Ethan says is more like a prison. Rather than escaping from there, he just never went at all and has been hiding in Anna’s house all week. The sleeping photo was taken by him. When he learns she is going to kill herself he says he would have been content to just watch – he would have snuck in to say goodbye at the last minute. But after Anna finds the photo and learns about Katie she has a change of heart.

Ethan has already stabbed David and is planning on killing Anna. Anna tells Ethan she’ll go ahead with the suicide anyway – David’s death will look as if it was committed by Anna and she’s already recorded her suicide note. She pours the crushed up drugs she was preparing to use to take her own life into her glass of wine and takes a sip. But unexpectedly she smashes Ethan over the head with the wine bottle and runs rather than finishing the glass. After a chase and a fight where Anna gets a gardening fork in the face, she pushes Ethan through a glass skylight and he plummets to the bottom of several flights of stairs, dead.

Doctor Fox, your family is dead!

Before we cut to the very end, a quick recap on Anna and what the actual deal with her is. At the pinnacle of her breakdown, with Anna pointing fingers left, right and centre, accusing Alistair of child abuse, suggesting David might be the killer, Detective Norrelli (Jeanine Serralles) shocks Anna out of her psychosis when she points out “Doctor Fox, your family is dead.”

Though Anna had claimed to be separated from her husband (Anthony Mackie), with their daughter staying with him, it appeared that every night he would talk to her – she’d tell him about her day including suspicions about the Russells, and sometimes talk to her daughter Olivia.

Turns out that was all in her head. In reality Anna, her husband and daughter were on a trip, driving high in the mountains in the snow. Anna and her husband were arguing because Anna had been having an affair. While driving a phone call on her mobile from an unknown number, which may be from her lover, distracts her from the road and she crashes the car, which results in the death of her husband and daughter. Unable to forgive herself Anna later attempts suicide. The extreme guilt causes her agoraphobia as well as her delusions that she is speaking to her dead family.

Believe it or not, The Woman in the Window has something of a happy ending. Having pushed a teenage psychopath to his death through a window, Anna wakes in hospital. Nice Detective Little (Brian Tyree Henry) is there and he offers Anna a full apology – Katie’s body has been found, the Russells are in custody and even though Alistair is keeping closed-lipped, Jane Russell is not. While Detective Little has seen Anna’s suicide video on her phone he opts to give her the chance to erase it before the phone is taken in as evidence, in an act of penance.

Nine months later and Anna has made a remarkable recovery all round. She’s sold her place and is moving house, and as she departs for the final  time, she bids farewell to the ‘spirits’ of her husband and daughter that had kept her company while she was shut in there. Taking her cat with her in a carry case, Anna walks out the front door and into the world, her agoraphobia no longer present.

The Woman in the Window is available to stream on Netflix now.

Charles Addams Biographer Defends Addams Family Values
Best Halloween Costumes: When TV Characters Dress Up As Other Characters
Link Tank: Where You Can Watch Dune (and All the Other Versions) This Week
New World: Gold Farming Tips For the Broken Economy
Superman is Bigger than The American Way: A Better Tomorrow for the Man of Steel Awaits