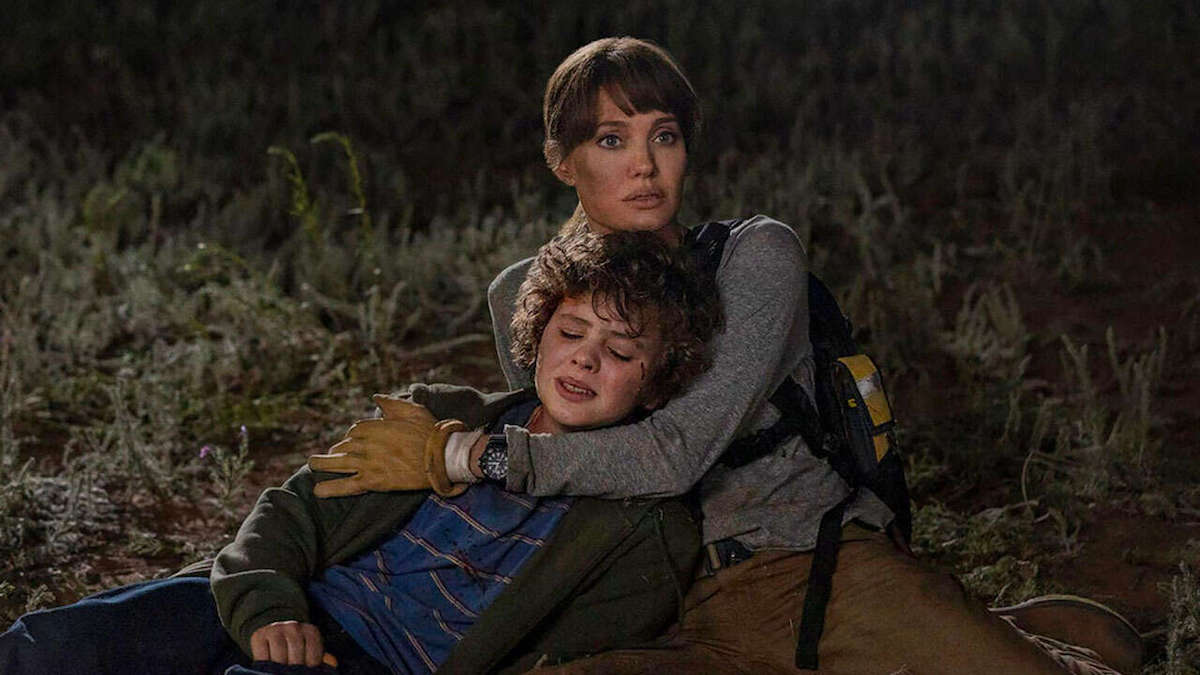 This article contains Those Who Wish Me Dead spoilers. You can read our spoiler-free review here.

What’s on the piece of paper? Why exactly do Aidan Gillen and Nicholas Hoult want this Connor kid dead so badly? The ending of Taylor Sheridan’s Those Who Wish Me Dead is purposefully vague about what all this killing was about. But as a news crew approaches the young lad, played by Finn Little, it becomes clear he is going to tell a story that a lot of shadowy people wanted to keep hidden.

So what is that story and why did so many people have to die for it? The exact details remain hidden, but if we look at the whole structure of the movie, there are enough context clues to have a pretty good idea of what all the dying is for.

It goes back to the beginning of the film where we see Gillen’s Jack and Hoult’s Patrick pass themselves off as local gas and fire authorities in Florida, ingratiating themselves with the wife of an off-screen district attorney—he’s in the shower—and presumably killing both before planting the bomb. We aren’t shown that they physically murder the couple either, but writer-director Sheridan relies heavily on inference throughout the picture. Case in point: Jack and Patrick debating whether the latter needs to go change his shirt because there is a drop of blood on it. This strongly suggests that they killed everyone in the house, even before the explosion.

In the same vein, you can also hear a baby crying off-screen when Jack and Patrick first enter the DA’s home, which means when Patrick later tells Ethan (Jon Bernthal) he won’t kill him or his wife Allison (Medina Senghore) because she’s pregnant, he’s lying through his teeth. In fact, Jack picks going against the shooter at the end over Angelina Jolie’s Hannah because he’s furious about getting the whole Two-Face treatment with the fire to the face earlier in the movie, and he hopes Allison is holding the deer rifle in the woods.

Conveying motivation through implication applies to most of the characters in Those Who Wish Me Dead, and what they’re dying over. When Connor’s father Owen (Jake Weber) sees on the morning news in Jacksonville, Florida that the DA he worked for died “in a gas leak,” he immediately goes on the run with his son, getting farther than the men who wish him dead could have anticipated. And he gives us just enough to know why he is so scared with his confession to his son.

“I’m a forensic accountant,” Owen tells the boy, “which means I look for things that don’t add up. And I found some. The man I worked for, he was killed today because of what I found. But I still know it, which means they’re gonna come after me too.” When his son protests they should go to the police, Owen insists that the police protection didn’t save the DA. “The case implicates a lot of people, son, people with a lot to lose. Governors, congressmen. We can only trust people that we know.”

It’s a wise choice, although trusting the family that he knows is exactly how Jack and Patrick find the father and son so easily. After breaking into the accountant’s home, Patrick coolly spies a family photo of the pair in Montana with Uncle Ethan and Aunt Allison, thereby knowing they’re going to Soda Butte Survival School in Montana. The killers get there by plane long before Owen drives to his doom on the Lewis and Clark Trail.

Still, from what little Owen tells us, we can ascertain that he is an accountant who specialized in tracing money laundering, embezzlement, fraud, and the type of racketeering where organized crime and politics intersect. While we’re never told which politicians are implicated, it’s a fair bet that there are many in the Florida area caught with their hands in a violent, possibly treasonous cookiejar. One is even tempted to speculate it could involve a former president with a Floridian residence (notably Those Who Wish Me Dead was originally due out in 2020), but that is perhaps just imaginative thinking.

The full weight of the menace, however, is exemplified by Tyler Perry who has a tantalizing cameo as “Arthur,” the laconic heavy who makes an unexpected appearance in Montana to apply pressure on Jack and Patrick for failing to kill Connor in the car wreck. We don’t know a lot about Arthur, but the way he says “we promise absolutes, and unlikely is not an absolute” seems to suggest he’s a crime boss of the highest order.

Yet the way he doesn’t even want to be seen on the same road as Jack and Owen’s car—having Jack be dropped off in a parking lot and walk over an interstate for their roadside chat—suggests Arthur is someone more public than even that. Perhaps he works in a political office, or is at least a fixer hired by one. He provides a brutal form of clean-up and discretion to people in power, while exerting his own influence over them. “I will make them have the stomach for it,” Arthur tells Jack about the prospect of killing a lot more innocent people in this small Western town.

Thanks to Perry’s one scene, we also get a strong idea about why it would be so dangerous for people in power if even Connor with a blood-stained note can get in front of a media camera. He’s more than just a witness to his father’s murder, and a mouthpiece for what might be by then unsubstantiated claims from his dead old man. Arthur explains exactly what’s in that note for us.

While we know the boy is only carrying a note, the note could plausibly include the location of those duplicates, as well as the names of powerful politicians who are implicated. After all, it would take a very big name, at perhaps the highest level, to get Jolie’s Hannah so spooked. She went from trying to convince the child to spend the night in her watchtower to saying, “We’re leaving right now” after glancing at the paper. It appears Owen found the smoking gun, and now it’s firing directly at him and his.

So young Owen getting on television and sharing his truth with the world will likely have profound implications, creating a situation that is, in Arthur’s words, “untenable” for those who wish the kid dead.

With that said, the truth is we never have to know the full details. The point is conveyed quickly and clearly with that first gas leak explosion in a rich suburban neighborhood: this is information of the most explosive nature. And in truth it is a MacGuffin that gets us into the movie’s conventional thrills about Jolie versus Hoult in a burning forest, with an axe between them.

Alfred Hitchcock popularized the term “MacGuffin,” to refer to the object or plot device which incites the tension and intrigue of a thriller. He also famously shrugged that the MacGuffin is nothing.

“The best MacGuffin is the one that 30 minutes after the movie is over, you have no idea what it was,” TCM host and novelist Eddie Muller once told us. “To me, that represents the essence of the MacGuffin. It’s like you remember everything that happens in the story, but you have no idea what it was that they were after. ‘Like, what was that again? I can’t remember!’”

So while it’s fun to speculate just how damning that little piece of paper is, what you’ll probably really remember about Those Who Wish Me Dead, if anything, is Jolie’s silhouette surrounded by flames, or the tension of Allison blowing more than smoke in a couple of hapless killers’ faces.

Castle Rock Season 1 Episodes 3 & 4 Review & After Show
Amid Spider-Man: No Way Home Rumors, Charlie Cox Teases a Rebooted Daredevil
Superman is Bigger than The American Way: A Better Tomorrow for the Man of Steel Awaits
Succession Season 3: Kendall Roy is Back On Top, But for How Long?
Night Teeth: Megan Fox and Sydney Sweeney Should Lead Their Own Vampire Movie