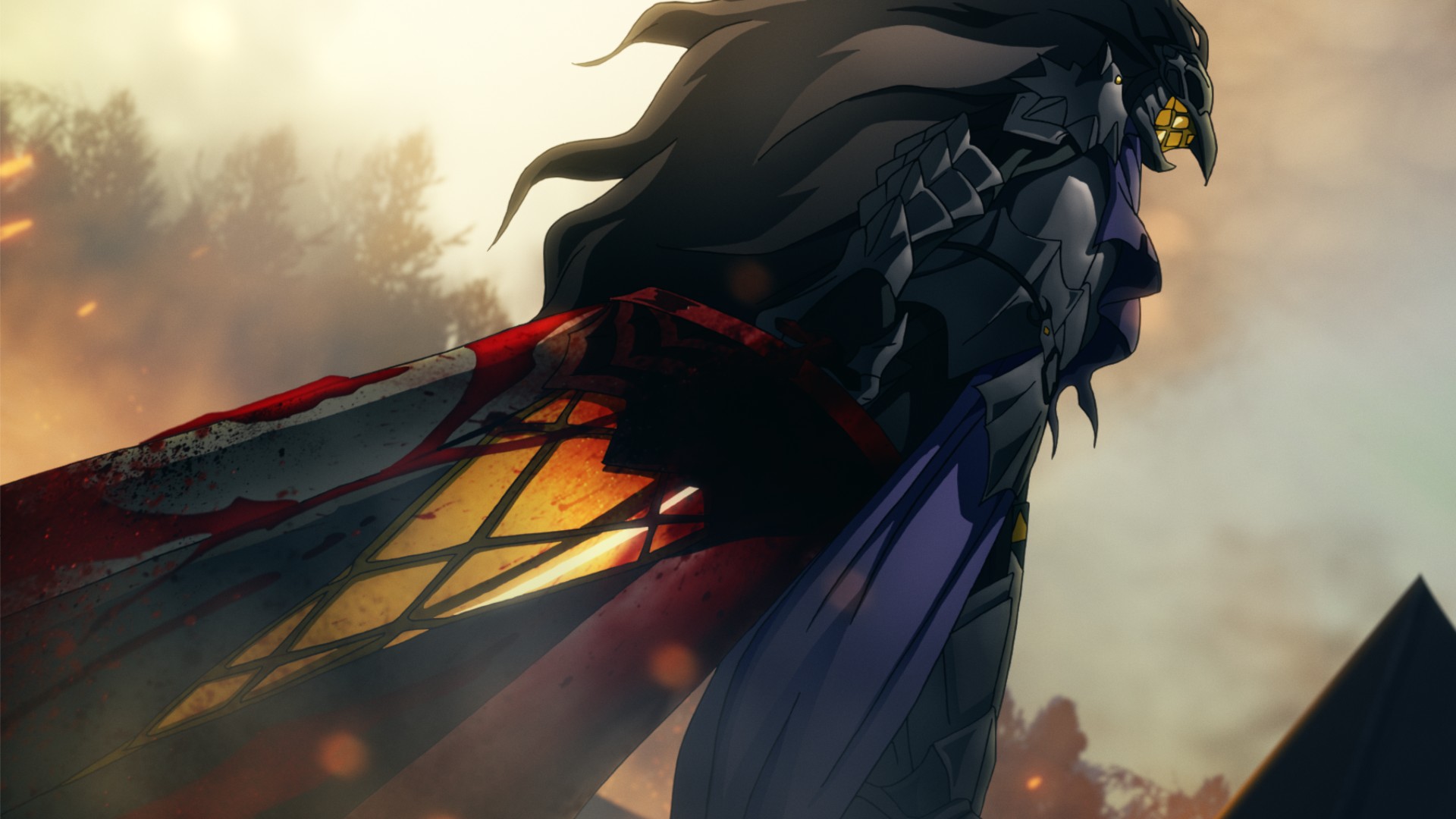 Netflix’s Castlevania comes to a close in season 4. Trevor and Sypha head to the city where the war with Dracula began, while Alucard finds new purpose beyond his castle. And when a new threat arises that’s bigger than anything they’ve ever faced, the heroes have to band together once again to save humanity.

The penultimate episode of the series feels like a final boss fight, and it’s only fitting that everyone converges at Dracula’s castle for the fireworks. Here’s what happened in the series finale and what it all means for the characters:

So who was Varney really?

There’s more to Varney of London than what we see in the first couple of episodes of the season. Varney’s plan goes far beyond conquering Targoviste and killing Trevor Belmont and Sypha Belnades. He actually turns out to be the main villain, and the final boss, of the season.

Castlevania season 4 drops its big twist in episode 9: Varney reveals that he’s actually the Grim Reaper, a vampiric being who feeds on the souls of the dead. His plan to resurrect Dracula and Lisa Tepes inside the Rebis is truly twisted. By combining their souls, which have been stuck in Hell all this time, inside one body, Death hopes to drive Dracula mad, which will cause the reborn vampire to go on a murderous rampage that will engulf the entire planet. This would mean an endless food source for the Grim Reaper. Fortunately, Trevor and his friends are able to stop this madness just in time.

Why did Isaac spare Hector?

Ever since the death of Dracula, Isaac has been on a mission to avenge his master, punishing those who betrayed the Lord of Vampires. At the top of his list are scheming vampire queen Carmilla and Hector, a fellow Forgemaster who was manipulated into turning on Dracula. While Isaac vanquishes Carmilla and her minions during an exciting battle sequence in episode 6, he decides to ultimately spare Hector despite his role in Dracula’s fall.

It seems that by the time he launches his attack on Styria, Isaac has had a change of heart, wanting only to stop Carmilla from subjugating the world. While he once felt nothing but contempt for humanity, he decides to do the right thing and give mankind a chance at peace. With Carmilla gone and her forces depleted, the world can finally begin to rebuild.

But why does Isaac to let Hector live? For one thing, he recognizes that Hector has known nothing but suffering since he betrayed Dracula and was enslaved by Carmilla and her sisters. Isaac also realizes that Hector was manipulated in the first place, unknowingly helping Carmilla solidify her power. Isaac chooses to carve a new path for himself and allows Hector to begin to do the same, a happy ending for the two Forgemasters.

What is a Rebis and why did Saint Germain betray his friends?

The Grim Reaper’s plan is to transport Dracula and Lisa Tepes’ souls out of Hell and into the Rebis, also known as the divine hermaphrodite in ancient alchemy. The Rebis is a symbol of the “great work,” the ultimate goal of the alchemist, which involves “spiritual transformation, the shedding of impurities, the joining of opposites, and the refinement of materials,” according to Learn Religion. In ancient alchemy, the Rebis represents “a reconciliation of spirit and matter” and has “both male and female qualities.” The “great work” is also used to describe the alchemist’s mission to create the philosopher’s stone, a mythical substance that was said to turn base metals into gold or silver.

This is a bit outside my area of expertise, but as the Rebis relates to Castlevania season 4, it goes back to Count Saint Germain, who is an alchemist who has strayed from his path to find the woman he loves whom he lost in the Infinite Corridor. After helping Trevor and Sypha stop the cult in Lindenfeld from resurrecting Dracula, Saint Germain is finally able to travel back into the interdimensional portal.

But instead of his beloved, Saint Germain encounters a fellow alchemist in the corridor (actually Death in disguise), who tells him that the only way for him to find his lost loved one is to achieve the great work, in this case creating a literal Rebis that will act as a vessel for the souls of Dracula and Lisa Tepes.

How did Trevor survive his fight with the Grim Reaper?

Trevor and the Grim Reaper’s final battle atop of one of the towers of Dracula’s castle can only end in death. Unfortunately for Trevor, he’s tremendously outmatched, as the Reaper’s final monstrous form easily overpowers the vampire hunter. It’s only through sheer force of will that Belmont is able to land the final killing blow, but it comes at a cost.

When Trevor stabs Death in the head with the dagger, the villain explodes in a bright flash of light, seemingly engulfing Trevor in a ball of fire that he couldn’t have possibly escaped. At least that’s what Sypha, Alucard, and Greta think after the blast.

But, just as a heartbroken and pregnant Sypha is about leave the new village of Belmont, Trevor reappears, half-dead on horseback. How the hell did he survive that explosion?

Well, the explanation is a blink-and-you’ll-miss-it moment: right when Trevor is about to land the killing blow, the camera cuts to a dying Saint Germain, who eyes the key to the Infinite Corridor one last time. According to Trevor, Saint Germain opened the portal one last time, just as the explosion rocked the castle, transporting the vampire hunter to safety in the nick of time. Just go with it.

Who is Trevor and Sypha’s child?

Trevor and Sypha are having a baby! In the original continuity, Trevor and Sypha have two children, one of which becomes the parent of Christopher Belmont, the protagonist of two Castlevania games for the Game Boy, 1989’s The Adventure and 1991’s Castlevania II: Belmont’s Revenge.

Depending on which timeline the animated universe wants to follow, Trevor and Sypha’s offspring could lead to either Christopher or Simon. That said, there’s always a chance that a future Castlevania Netflix series could simply introduce a new, never-before-seen Belmont character, the son or daughter of our our two heroes!

Why did Lenore kill herself?

Lenore struggles to find her place among the vampire sisters. Carmilla, Striga, and Morana have turned to war, with Carmilla planning for world domination. Lenore’s role is diplomacy, which is the perfect skill set for tricking Hector into eternal servitude but not the one needed in a time of war. She feels left out and useless.

Things only get worse when Isaac attacks their castle, killing Carmilla and imprisoning Lenore. But unlike Hector, who seems content to be with her, even as he schemes to resurrect Dracula and help topple Carmilla, Lenore doesn’t want live the rest of her eternal life in a cage. She chooses instead to die, walking into the day for the first and last time.

How are Dracula and Lisa alive?

While we know that the Grim Reaper and Saint Germain were able to use the Infinite Corridor to free the souls of Dracula and Lisa Tepes from Hell, it’s unclear how they were able to find new bodies and resume their lives as flesh and blood. In an interview with Screen Rant, executive producer Kevin Kolde explained what happened after Dracula and Lisa were freed:

“So, Lisa and Dracula are pulled out of Hell by Saint Germain using death magic, and they are put into the body of this Rebis where they’ll be trapped, and Death hopes that they’ll be very unhappy and kill lots of people. Lots of souls to eat. Trevor destroys the Rebis using holy water, so their souls are dispatched from the Rebis. That’s essentially how they get back from Hell to the real world. And they go [back into their own bodies]. It’s death magic.”

It’s canon that Dracula is returned to life every couple generations, so it makes sense that he’d be back, and while it seems like he’s getting a happy ending in the finale scene of the series, Castlevania fans know that happiness is not meant to last in this universe…

Night Teeth: Megan Fox and Sydney Sweeney Should Lead Their Own Vampire Movie
The Batman Feels Like It Picks Up Where The Dark Knight Left Off
Who is the Biggest Bastard in Succession?
Doctor Who: Flux Sees the Doctor Face ‘Psychologically Terrifying’ Monster
American Horror Story Season 8 Episode 1 Review & After Show