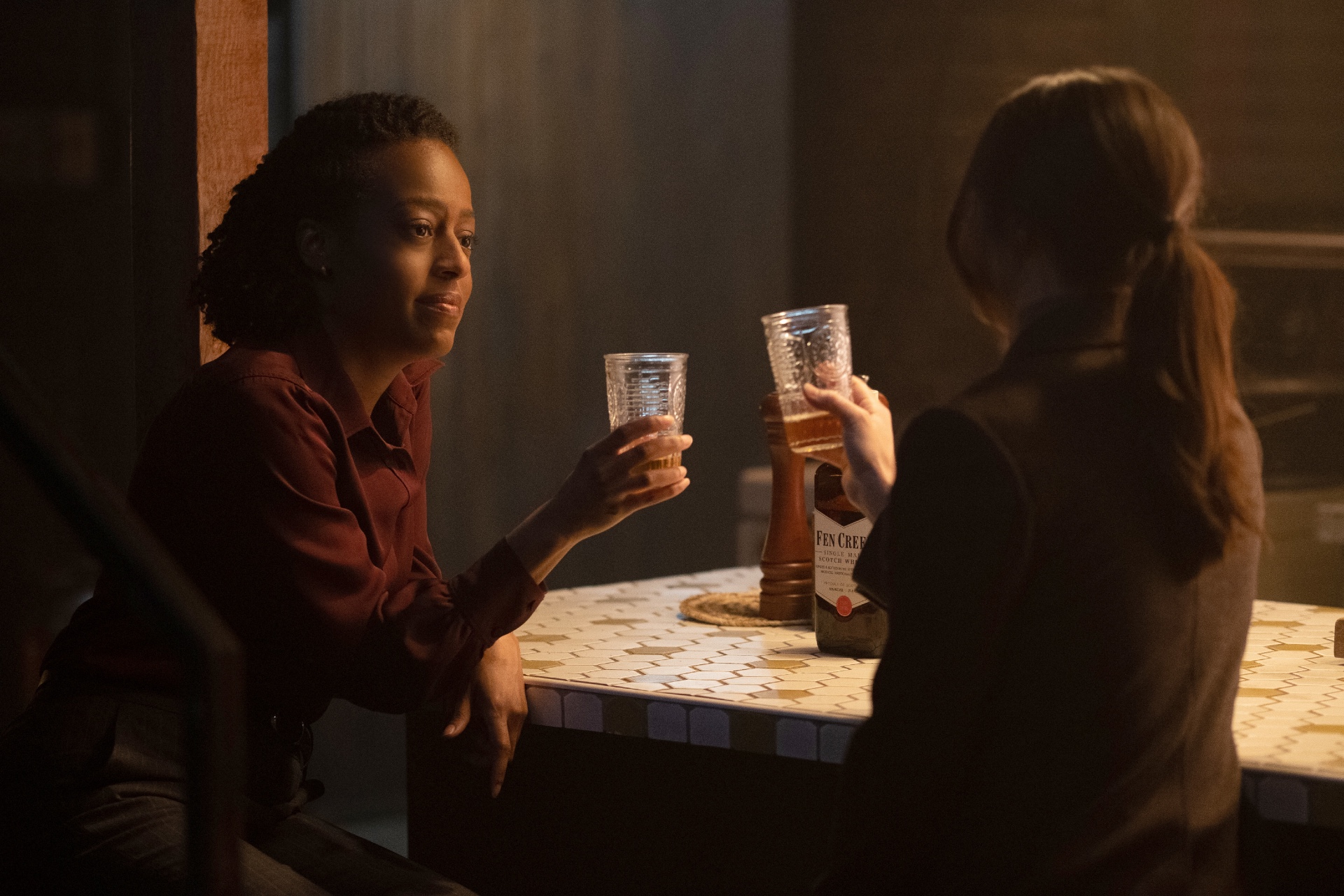 Clarice episode 9, “Silence is Purgatory,” offers a taste of temporary hell by exploring the connections of the show’s past and getting blocked from forward movement. The team is finally looking into the links between the River Murders and Alastor Pharmaceuticals. The company’s drug Reprisol is responsible for multiple cases of babies born with birth defects, and their well-connected attorney Joe Hudland (Raoul Bhaneja) keeps someone on the payroll just to kill anyone who steps forward.

“Silence is Purgatory” opens in the midst of the pre-shoe-leather phase of the investigation. The ViCAP team is working in the basement, out of sight from the prying eyes of the Bureau. They can’t even see each other that well. Even several levels beneath the FBI offices, behind closed doors, the agents are apparently still too wary to turn on the overhead lights. It makes it seem like they’re hiding something, and the ViCAP agents don’t are not fond of obscure references. Their first instinct is to shake down anyone who gives off even a faint whiff of a shadowy past.

When Clarice leans on Julia Lawson (Jen Richards), the corporate accountant for the pharmaceutical company, she opens up Pandora’s box, and the show takes on the sins of the source material, Jonathan Demme’s Silence of the Lambs. Serial killer Buffalo Bill was indeed a monster, but poisoned a well which runs deep in the country’s water supply. The procedural search for the destructive path of a lethal irregulated drug is an unintentional allegory to perceptions to identity itself.

Lawson has a problem with Agent Starling, and chooses to address it directly. She is transexual and the media blitz which Clarice rose after the Buffalo Bill case discounted the collateral damage. Every headline in every newspaper turned an entire demographic into monsters. “Psycho skins women, driven mad by transexual desire, that was the front page of ‘The Baltimore Herald,’” Lawson tells Clarice. The series has always been as much about the psychological aftermath of the Buffalo Bill case as it is on the crime being solved. The trans witness forces more self-reflection on Clarice Starling (Rebecca Breeds) than half a season of broken mirror therapy. It’s a bit ham-fisted and just short of soap operatic, but the series only has room for one diva and still follows procedures.

Thumbscrews are an investigator’s best friend, suggests Agent Murray Clarke (Nick Sandow). That’s what investigations are all about. Finding, applying and tightening thumbscrews. Clarke implies you can get a masters of fine art in it at the CIA, but he can’t talk about that. Clarke is the most fun character on the show, and the episode’s representative everyman. Clarke always appears not to give a shit, dishes out the toughest of love, and takes every death very personally. Especially when he’s blaming himself specifically for it. Sandow is always doing two things at once. So, as much as we may click our tongues at how he’s got no tolerance when a buddy chips on a 16-year-old single malt, we doubly despise him for digging up all-too personal dirt. But it is designed this way.

We know Clarke is going to overstep his bounds early when Agent Esquivel (Lucca De Oliveira) tries to derail an immigration extortion tactic before it gets going. We are supposed to applaud him for nipping Deputy Assistant Attorney General Paul Krendler’s (Michael Cudlitz) intentional fall off the wagon in the Budweiser, but the audience and Clarice are only interested in changing the status quo. Even after he acknowledges he drives the drug rep Naomi too far, gets him no sympathy.

Agent Ardelia Mapp (Devyn Tyler) also makes good on her decision to help challenge the status quo. She and Agent Garrett (K.C. Collins) are working to get the Black Coalition’s case against the FBI ready for a lawyer. Amidst the listing of grievances, their exchange features one of the few moments of intentional character comedy in the series. Garrett says he will fake a hernia to join her at the lawyer’s office. She thinks that’s funny. Normally, it would be disastrous for this pair to wind up dating because it is the obvious clichéd move, but now we want to know what kinds of kink they might throw into the relationship.

Of course, the entire systemic discrimination suit hinges on a direct conflict with Clarice, why else would the show be named after her? She’s the center of so much drama, the series is beginning to seem like a sitcom. Clarice is also beginning to crush on her biggest lead. Tyson Conway is the cast off son of Nils Hagen, the man who actually owns the company which is at the center of the investigation. He tries to steer clear of self-pity, and she sees him as a comfortable place for pain to land. Clarice is one straw short of a busted hump, psychologically.

We are hoping Catherine Martin (Marnee Carpenter) will add that extra weight towards a relieving breakdown. The Buffalo Bill victim who was told to “put the lotion in the basket,” finally gets past the front door. The crime gave her an extreme case of agoraphobia. She is only now for the first time seeing her ex-fiancé since he disappeared from her life in the aftermath. The scene is painful. Catherine gets to dump her rage and throw all the guilt she wants. But she’s still stuck with the check at the end of the night, and winds up thanking her Attorney General mother for making more room in the womb of their mansion. Of course, the first thing she does when she gets home is call Clarice.

“Silence is Purgatory” moves the investigation into slightly more dangerous waters while connecting the dots of the agent’s therapy. The procedural behind Clarice proceeds in the plodding way of the genre. While it’s interesting to see the mental connections materialize through plot, it is still more garnish than nutrition.

The Outsider Season 1 Episode 8 | AfterBuzz TV
Who is Your Favorite DC Character? | DC FanDome
Is Halloween Kills Box Office Success a Good Sign for Dune?
Doctor Who: Why Is It So Difficult to Replace the Showrunner?
Night Teeth: Sexy Vampires Feast on Crime Movie Thrills