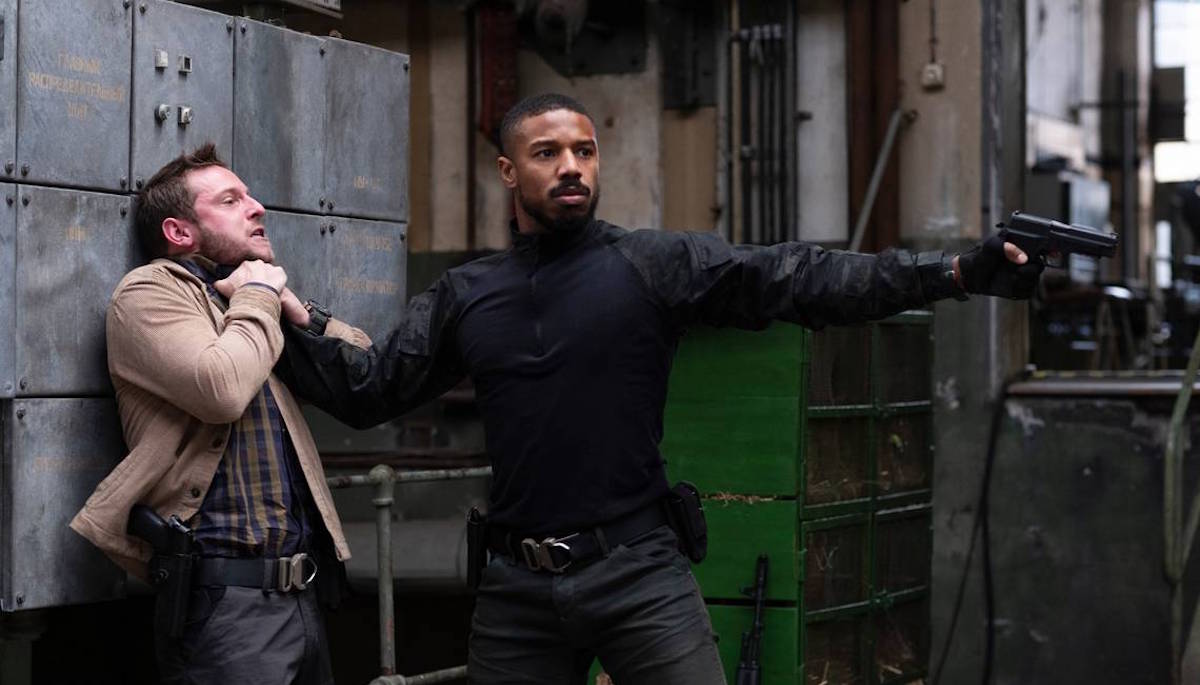 People like to say Tom Clancy’s politics never left the 1980s. That’s probably true, but movies based on his work are firmly planted in the ‘90s. Beginning with John McTiernan’s crackling (if even then historically dated) The Hunt for Red October (1990), the decade was a boom era for technocratic spy thrillers. And at heart, Clancy’s popular Jack Ryan character really works best as a technocrat. If the author ever wanted to indulge in action thrills, there was always John Clark, Clancy’s other recurring protagonist. Yet, strangely, Clark never got to star in his own movie. That changes in Without Remorse, the long-gestating adaptation of Clancy’s 1993 novel which sees Michael B. Jordan don the camo fatigues.

Updated for the 21st century with Syria replacing a literary origin story rooted in Vietnam, and Clark’s complexion being tweaked for a more inclusive era of action heroes (previous actors who played Clark include Willem Dafoe and Liev Schreiber), Tom Clancy’s Without Remorse presents itself as a modern thriller. Don’t believe it. This Amazon release is as rooted in ’90s geopolitical values (and movie tropes) as when Harrison Ford starred opposite Dafoe’s Clark in Clear and Present Danger (1994). Actually, Ford’s The Fugitive (1993) might be more apt since this story of a hero out for revenge—over a dead wife who’s been left in the proverbial fridge—feels hopelessly antiquated.

Luckily, even at its most cliché, Without Remorse does have a lot going for it whenever Jordan gets unleashed by the script. As a one-man army, the actor is relentless in his desire to win over his audience with shock and awe. More often than not he succeeds.

Opening on a clandestine Navy SEALs operation in Syria, Without Remorse features the same no-frills violence that made director Stefano Sollima’s previous collaboration with screenwriter Taylor Sheridan—Sicario: Day of the Soldado—a guilty pleasure. Similar to the heroes of that 2018 thriller, Jordan’s protagonist in Without Remorse is the most stoic and badass of a Navy SEALs team filled with stoic badasses. Going by his birth name of John Kelly (he adopts the moniker Clark later in the story), John is doing nebulous wet work for the CIA, which is represented by an ambiguous presence named Ritter (Jamie Bell). At the beginning, Ritter tells the SEALs they’re in-country to kill Syrian thugs, but when the bullets start flying, the aftermath reveals Russian spies in the body count.

Back home and starting a civilian life with wife Pam (Lauren London), Kelly attempts to adjust to normalcy. He has a new job and a baby on the way. Those dreams are shattered though when Russian special forces break into his home, killing his pregnant wife and leaving John for dead. After a stint in the hospital, he’s told by the CIA to let it go. U.S. intelligence deems the death of his wife as the cost of doing business; they don’t want to accelerate these tit-for-tat murders into a war. But John couldn’t care less about the CIA’s spy games. Soon enough he’s brutalizing any Russian agent he can get his hands on in the hopes of finding the man who killed his wife.

With the help of his old SEAL buddy and current naval officer Karen Greer (Jodie Turner-Smith), John is going to shoot, torture, and kill all his way to Russia and the center of an international conspiracy—eventually even getting the Defense Department to bankroll his revenge.

Written by Sheridan with a sensibility in keeping with the complicated politics of the Sicario movies, as well as Hell or High Water, Without Remorse sports a grounded cynicism designed to give its action bite. However, this bit of realpolitik is mainly window-dressing, a bit of flavor on top of what is essentially a straight ahead revenge yarn. It thus lands closer to the absurdity of Sicario 2 than the one directed by Denis Villeneuve. With that said, there’s some irresistibly gruesome set-pieces throughout Without Remorse to keep the blood up and flowing.

In one sequence, John crashes his car into a Russian diplomat’s vehicle and then pours gasoline on top of it. He then enters the burning vehicle for a flyby round of interrogation. It’s like a speed dating version of a Jack Bauer torture session in 24. Also like that series, Without Remorse unapologetically leans into satisfying that caveman side of the brain, albeit now done with a lot more flair.

That added swagger clearly comes from Jordan, who appears ready to announce his action star bona fides. The actor of course already starred as the villain in Black Panther, and entered the ring for more than one Creed film, but as the man who will be John Clark, Jordan gets closer to the Rambo side of the Sylvester Stallone paradigm. There’s even a sequence where Jordan takes his shirt off for no other reason than to let his foes stare at his washboard abs before he breaks their heads in. It’s absolutely earned.

It’s a shame though the movie he’s in couldn’t do a little bit more with its conventions. In a wise move, the Without Remorse film plays fast and loose with the novel’s many elements. In addition to the film replacing the Vietnam War with a modern conflict, a whole subplot about prostitution drug rings has also been wisely cut. Yet the movie still unfortunately keeps the novel’s lazy inciting incident of a love interest being killed off to justify the hero’s pain.

But when it comes to Clancy, it’s almost impossible to separate the work from the political worldview that created it. No matter how many changes are made, this is derived from a vision where it’s always morning in America, and there’s ever an evil Soviet empire to be kept at bay. Ironically, Hollywood took so long to get Without Remorse made—it once was intended to be a Keanu Reeves movie in the early ‘90s—that Clancy’s Russian villains are timely again. Even so, Without Remorse plays like a star vehicle out of the past.

Fortunately, when that star is Jordan and his vehicle includes action sequences as good as the best few in Without Remorse, there is more than enough here to make a solid movie night.

Tom Clancy’s Without Remorse premieres on Amazon on Friday, April 30.

No Time to Die Box Office Opening Lowest for James Bond Since Casino Royale
How Star Wars: Ronin Brings the Saga Back to Its Roots
The Pressures of The Walking Dead’s Final Season
Run BTS: Is the Variety Show Ending?
Horror Movies That Should Get the Halloween Reboot Treatment