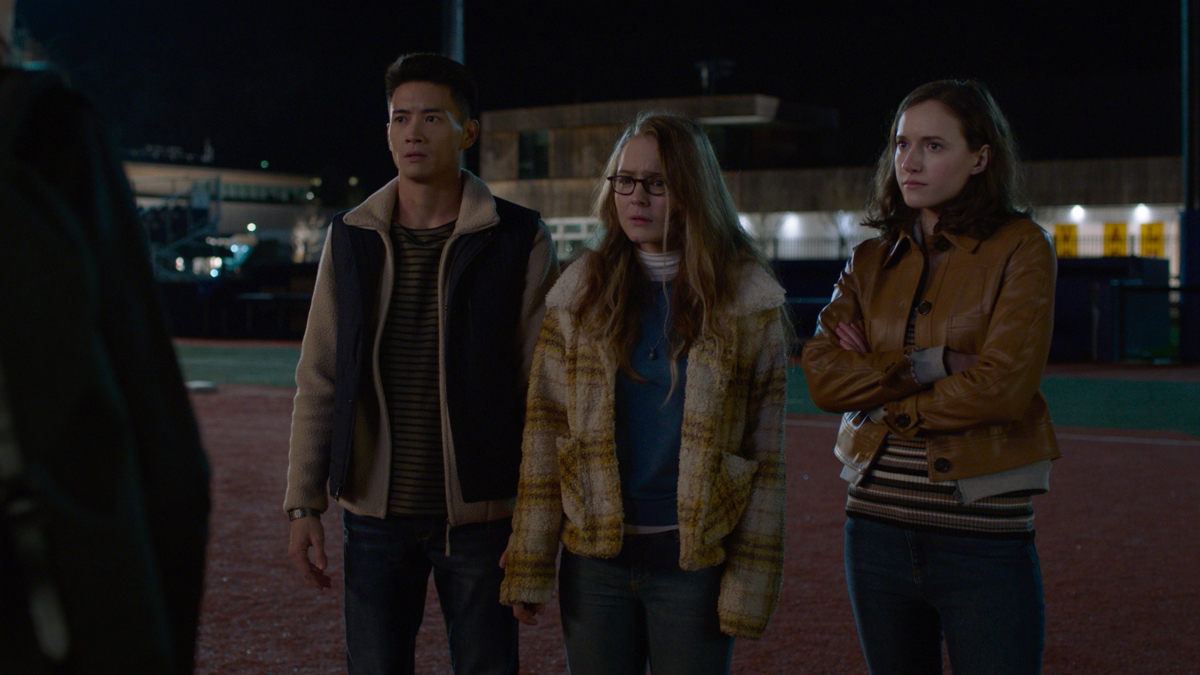 Supergirl’s first trip to Midvale back in season 3 was an incredibly special episode, a moody mix of winding roads and the sense of home, taking inspiration from Smallville and Veronica Mars, while giving viewers an insightful look at a true moment of growth for the Danvers sisters that also offered perspective on where they were in their modern continuity. For the final season’s return, take all those expectations and add in the promise of a young Cat Grant and two episodes to build the story. While the somewhat inaccurately named “Prom Night!” is only the first of those two episodes, unfortunately so far it doesn’t quite measure up.

The biggest hurdle for both our heroes and the tonal beauty of the previous escape to Midvale are a pair of extraterrestrial villains. Like something out of Mad Max by way of Yondu from Guardians of the Galaxy with an extra dash of Billy Ray Cyrus (Achey Breaky heart-era) thrown in, they’re barely in the episode, but when they show up their presence is jarring. Rather than lightening the mood, like Brainy’s trick baseball swing and surprising aptitude for American after school activities, their extreme corniness feels like Supergirl has left 2009 and gone to Power Rangers circa 1993. While the story likely needed an actual bad guy apart from Cat Grant, who is simply an antagonist, their very presence robs the rest of the episode of its emotional weight.

Even if the blue guys with mullets were erased from the narrative, there would still be something off about the story itself: the Alex and Kara dynamic. Since the Crisis on Infinite Earths affects the past as well, on this version of Earth, Kenny didn’t die in 2007. It seems as though none of the emotional development between the Danvers sisters during and after that case happened, because this Alex in the same headspace, talking about what she and their parents have all sacrificed for Kara, and calling Kara reckless and accusing her of taking the easy way out with her powers.

While it’s great to have Kenny back, erasing the critical events of that episode and the evolution in the sisters’ relationship completely is a missed opportunity. This episode takes place in 2009, two years after the flashback portions of the first Midvale episode. It would be so much more interesting to see the early days of Alex and Kara healing their relationship.

There likely still needs to be some reason for Kara to keep her powers a secret until the first season of the show, Alex doesn’t need to be that reason, or could be asking her not to in a different way. She could be in Kara’s corner and nervously urging caution without blaming her. Watching the Danvers sisters re-live a schism they already healed the last time the show flashed back to this time period is a frustrating re-tread.

Where the episode succeeds is in small moments of character-driven perfection, when Kenny finally shows Kara the Smallville-like barn base camp he’s made for their supering, or Brainy getting “conscripted” into the glee club and giving Kenny the incredibly on-brand advice that, “there’s nothing women like more than physics well applied. That and a modicum of emotional vulnerability.” Seeing Nia and teenage Kara show off their powers to one another and play together was such a lovely moment. Imagine what it would have meant to Kara to grow up with another alien around! It must also be said that Olivia Nikkanen and Izabela Vidovic reprise their roles yet again and the way they portray young Alex and Kara, from mannerisms to tone of voice, is the back bone of the episode. None of this would be possible without actors who so fully embody Alex and Kara that even though Melissa Benoist and Chyler Leigh aren’t on screen, one doesn’t miss them because their characters are truly here.

Eliza Helm’s Cat Grant – going by CJ here – is a fun addition. Her clothes are very 2000s (Blair Waldorf would approve) and her voice is an excellent Calista Flockhart. Cat has a storied history on the show, mostly told in unbelievable offhanded asides a la Alexis on Schitt’s Creek, and it’s cool to see her in her earlier days working hard for credibility, experiencing some of the sexism that shaped her into the character from season 1.

As usual, Brainy (who is adorable in his tux and gives excellent dating advice to Kenny) delivers much of the comic relief as well as the pop culture references, which are heavy on time travel movies like Groundhog Day and Back to the Future. Although as a 32-year-old man wanders around passing for a high schooler and becoming an athlete, Brainy has something of a David Arquette-in-Never Been Kissed vibe. It’s all an attempt at coping, and not a moment too soon. Brainy still hasn’t figured out how to deal with the removal of his personality inhibitors and so far, stress eating is a favorite. It’s strange to hear him tell Nia, “I don’t know what else to do” – we never see the genius Coluan like this, but it’s a sign of just how out of his depth Brainy is.

Nia has also been under stress, trying to interpret her dreams, missing her mother, and feeling inadequate. One moment that felt a bit off was when Brainy asked Nia what high school clique she was in and how she coped. She started to say she kept to herself, and the focus went back to Brainy. We know Nia didn’t have the easiest time growing up, though, which feels like something Brainy should have guessed, or that Nia might say. Nia knew her identity young, but that didn’t always protect her from harassment. Supergirl has largely done a good job balancing Nia and Brainy’s needs within their relationship, and it’s possible they’ll be revisiting this moment, but it was out of step with the usual awareness and care with which Supergirl is written.

Hopefully the second episode will find a way to remedy some of these issues, like dispatching the cartoonish villains and getting Alex on-side ASAP.