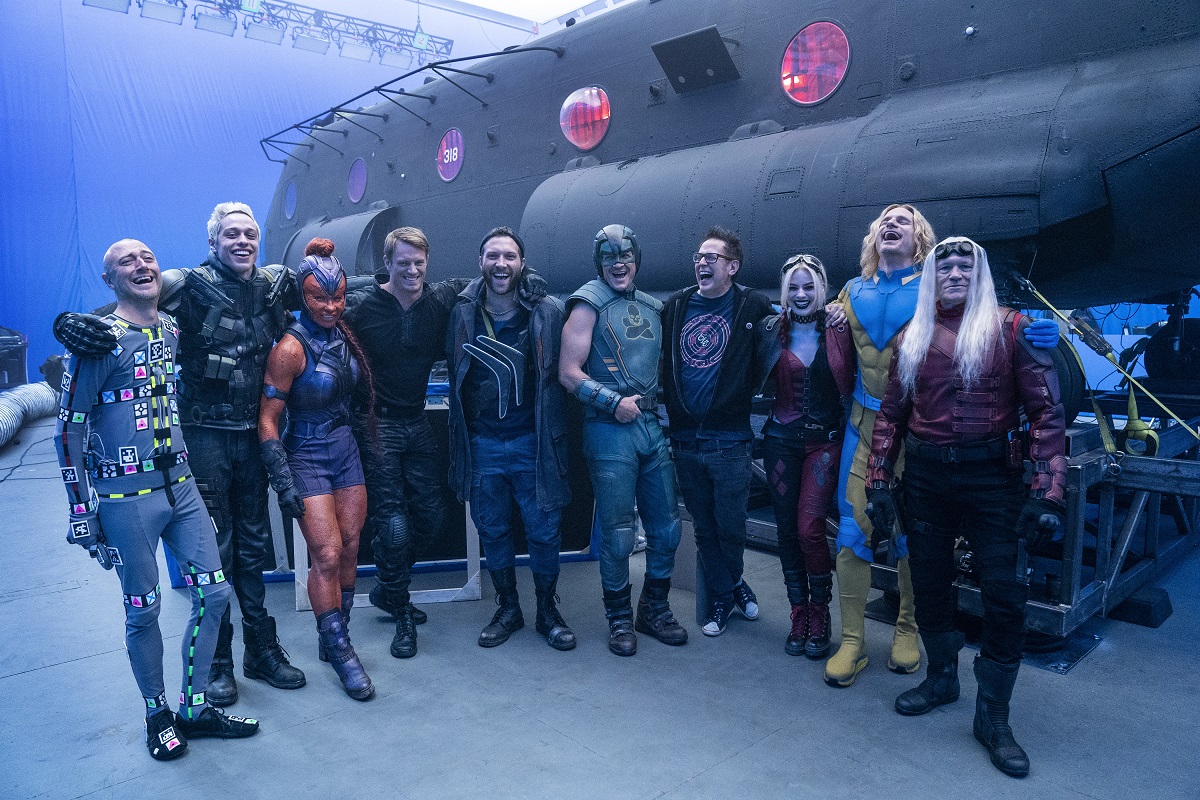 A couple of days. That’s how long director James Gunn had to wait before Warner Bros. and DC came calling in 2018. Up until that moment, it’d been a pretty turbulent July. The iconoclastic filmmaker who made audiences cry over a talking tree in Guardians of the Galaxy was just fired by Disney—temporarily as it turns out—and his name was being besmirched on social media. Yet less than 72 hours after that dismissal, WB was making him an offer that could change the face of DC superhero movies forever.

“It happened immediately,” Gunn says with a hint of lingering chagrin. “We started talking about what the project would be. The first thing that was brought up was Superman, but I didn’t know if I wanted to do that.”

So the studio suggested a once-in-a-lifetime alternative: make whatever you want. Gunn was free to adapt “anybody out of the DC catalogue.” Somehow though, with an entire gleaming multiverse at his disposal, Gunn only had eyes for the filthiest D-listers this side of Krypton. He only wanted to make The Suicide Squad.

The team of supervillain rejects has of course been adapted before, with David Ayer’s divisive Suicide Squad coming out in 2016. The earlier movie was a hit too, grossing more than $700 million and triggering a small bout of jealousy in Gunn, who even then thought that was the only DC property he ever wanted to do. But the film left something to be desired for many fans and critics.

To be clear, there are things Gunn absolutely loves about Ayer’s movie. How could he not, when he incorporated so many of the 2016 film’s cast into his own? In Gunn’s mind, Margot Robbie was born to play Harley Quinn, which he hopes to only further highlight by bringing out her “true lunacy” in the new movie. Viola Davis’s Amanda Waller, meanwhile, was the first character he decided to put in his own film. But Gunn is unambiguous on one point: his The Suicide Squad is going to be its own 31 flavors of weird.

“It wasn’t something to contrast the first movie,” Gunn says. “It wasn’t about going through a checklist of this is good, this is bad, this works, this doesn’t… but the concept that John Ostrander started with in the comics, that these are B-grade, shitty superheroes who are considered disposable by the U.S. government and are sent out on these black-ops missions, where they probably won’t make it but who gives a shit because they’re pieces-of-shit prisoners without many skills?”

That is the movie Gunn wanted to make. And he did so with R-rated glee.

Engineered as a standalone epic that might (or might not) be a sequel to the 2016 movie, Gunn’s The Suicide Squad is, in essence, meant to be a spiritual continuation of comic book writer Ostrander’s seminal 1980s run with the team. Davis’ Waller is still the government’s shady lady pulling the strings and recruiting incarcerated sad sacks to do the wet work law enforcement won’t; her point man on the ground remains Rick Flag (Joel Kinnaman), a straight arrow surrounded by coerced supervillains, including familiar faces like Robbie’s delightfully demented Harley, plus new ones such as Idris Elba’s Bloodsport.

The genre Gunn and his cohorts compare this to is war movies, but who they’re going to war against isn’t exactly clear. With that said, recent marketing revealed a comic book deep cut, with the 1950s space alien, Starro, running amok at kaiju-size.

“Starro is hilarious because he’s ridiculous. He’s a giant, cerulean blue starfish, but he’s also fucking terrifying,” Gunn says. “When I was a kid I thought that was the scariest thing of all time… and I think that exemplifies what this movie is: it is ridiculous and it’s also terrifying, and serious. So he works really well as the villain of the movie—as one of the villains, actually.”

Ironically, the real antagonists of The Suicide Squad might simply be the flick’s main characters, and Gunn is using the motley crew to unleash his distinctive voice. With an absurdly large cast to pick from, the director has carte blanche from WB to kill any character he wants, and to embrace any level of weirdness. And unlike the 2016 film, or his previous Guardians movies, The Suicide Squad is a big budget superhero flick with an R-rating. A first for Gunn.

“Most of my movies have been R-rated,” Gunn laughs when we mention this. He is, after all, a filmmaker who cut his teeth at indie grindhouse distributor Troma Studios, and has a history with tongue-in-cheek horror movies like Slither. But whether it’s making an R-rated Suicide Squad movie or a PG-13 Guardians picture, it’s all the same to him: telling the biggest-ass version of a campfire yarn.

“This is simply a little bit of a higher age bracket,” he explains, “and my audience is a little bit different. They can see a shark tearing someone in half, they can see a penis. It doesn’t matter.” Even so, there remains a sense of human connection among a number of broken Squad members. And those without that vulnerability still allow the storyteller to broaden the moral spectrum he’s playing with.

“I think you know from the beginning of the first Guardians that most likely, in his heart, Peter Quill is good, Gamora is good, Rocket is good, Drax is good.” But with the Suicide Squad, “some are not good people. They’re bad people. It’s less sentimental in that way. King Shark is much less sentimental than Groot.”

And some of these bad people will die in presumably horrible ways. Not that Gunn is killing his darlings lightly.

“The first thing I had to do was ignore the potential blowback from killing a character,” Gunn says. Instead he focused on following the natural progression of the story, and the natural progression of a character’s arc. “I’m just the servant of the story, so whatever the story says is what I’m going to do, no matter what the repercussions are for anything. I believe in the truth of the story. I believe that there was a story out there that needed to be told that I don’t have any control over.”

Perhaps ceding that control is the greatest advantage he’s discovered from making a gross, foul-mouthed superhero movie exactly to his liking.

“I wanted to do the things that other spectacle films haven’t been able to do,” Gunn says, “which is really take my time and investigate these characters, get to know them, focus on the character aspects, focus on who they were, and deal with time in a different way than it’s been dealt with in these movies.”

Gunn is thus able to let his movie breathe in a way that’s unusual for the superhero genre, but is in line with the more adult-oriented filmmaking he loved as a child. The Suicide Squad may be a war movie, but for Gunn it’s a specific type of throwback. Quick to name The Dirty Dozen and The Great Escape, he becomes audibly excited when discussing those 1960s “war-caper” films from his youth. Recapturing that men-and-women-on-a-mission aesthetic is as much the appeal of the movie as honoring Ostrander’s comics. He even refers to Elba’s Bloodsport as his Steve McQueen.

“He’s the unsentimental portrayal of a 1960s action hero but without the moral repercussions of those characters,” says Gunn. Also, he notes, Bloodsport is the guy who shot Superman with a kryptonite bullet. “How cool is that? And also, what a dick!” When contrasted with Robbie’s Harley Quinn, Gunn even likens the pair’s energy to an Abbott and Costello routine, only now Costello might kill you with a bat.

But then, each of the Squad members represent their own genre. They also each leave the door open for further exploration. Hence Gunn’s next project is still not Guardians 3, but rather an HBO Max TV series starring one of the nastiest pieces of work in The Suicide Squad: John Cena’s Peacemaker.

Describing the jingoistic flag-waver as if Marvel’s Captain America took a really far-right turn, Gunn saw Peacemaker as the perfect jumping off point when HBO approached him about doing a series.

“I think that the actual inspiration for Peacemaker was the shitty 1970s Captain America TV shows that I loved when I was a child,” Gunn says. “And I think Peacemaker exemplifies a lot of things about society that are going on politically, and what people’s beliefs are about America and the world. So being able to tell those stories that are slightly more socially conscious in their essence, but also outlandish, he lends itself to that.”

Exploring this week-to-week with Cena—an actor whose range Gunn believes audiences have only seen a fraction of—is irresistible. In fact, Peacemaker might mark another significant turning point in Gunn’s career.

Says the filmmaker, “I love doing Peacemaker. I could see just making TV shows after Guardians 3. It’s a possibility.”

The Suicide Squad opens on Aug. 6 in theaters and HBO Max. We’ll have more from our interview with James Gunn in the coming weeks.

Check out more on The Suicide Squad in the latest issue of Den of Geek!