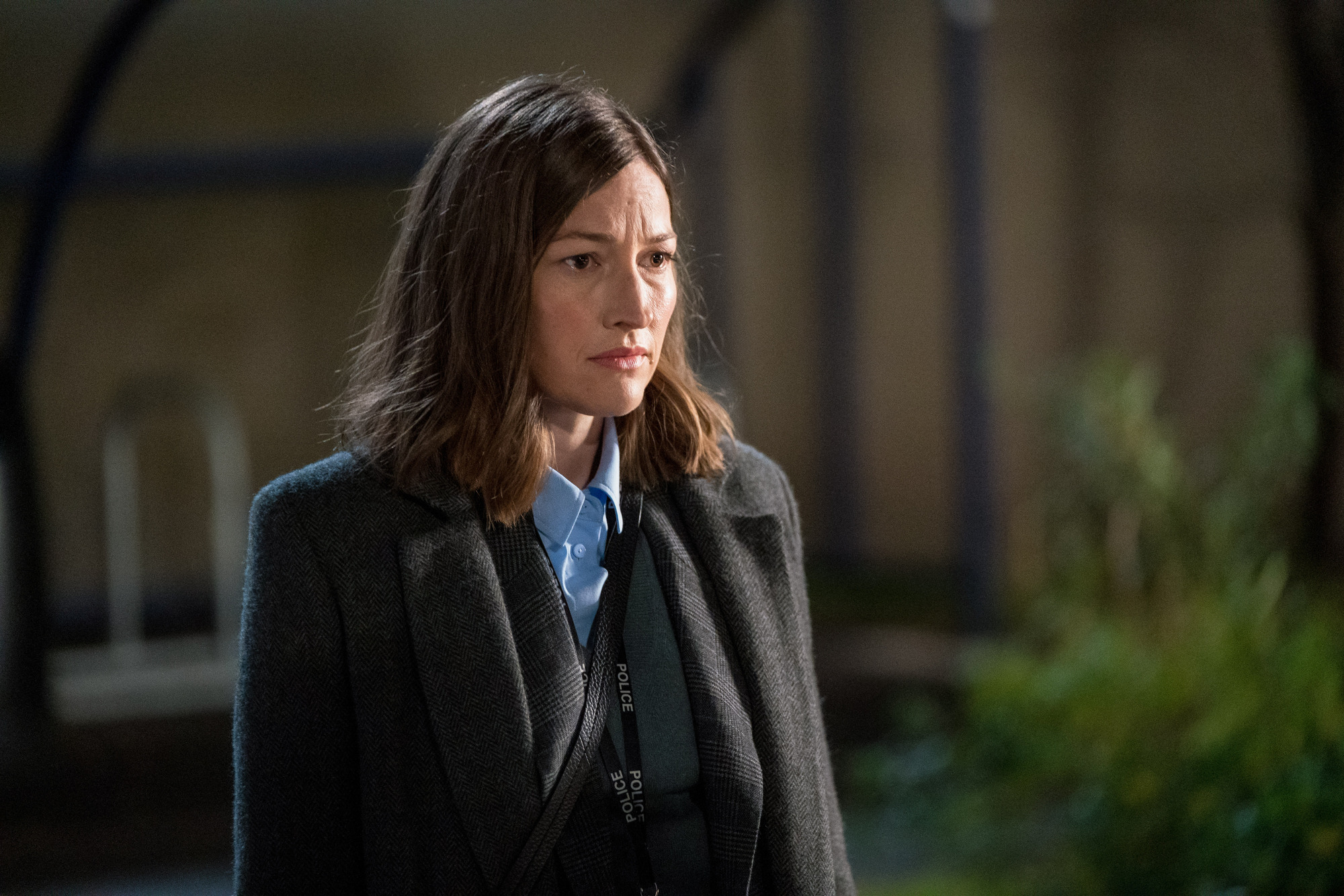 Notebooks at the ready. There’s just one episode remaining in this special extra-long Line of Duty series, and after that whopper of an interview scene, we already have the answers to several of our previous questions. Below are a few still to be pondered, including: how long has Marcus Thurwell been dead? (Ages) Is Patricia ‘Don’t call me the Guvnor’ Carmichael working for the OCG? (Nah) Is CC Osborne The Fourth Man? (Has to be, doesn’t he?) And what are they going to find under the concrete floor in that workshop? After you’ve read our weekly episode review, join the speculation scrum below.

So, Jo didn’t know Tommy was her father?

No, she’d been told that her father was a corrupt police officer who’d raped her mother aged 15. Marcus Thurwell perhaps? That looked like a flinch when his name was mentioned. Either way, the news that ‘Uncle Tommy‘ was actually the man who had impregnated her mother was clearly devastating. Jo grew up in Glasgow as part of the Hunter crime family (who lived in the English city where Line of Duty is set). When her mother Samantha became pregnant as a result of incestuous rape by her younger brother, Samantha was sent back to Glasgow to live under her mother’s maiden name of Davidson, and forced to keep the baby – Jo. 16 years later, Tommy Hunter returned to Glasgow and took an interest in his daughter/niece. He wanted Jo to become another one of his ‘Caddies’, a police officer working for him on the inside. Samantha Davidson killed herself, and since Jo joined the service, she’s been forced into doing the OCG’s criminal bidding from within.

We don’t know, but a good guess would suggest a contract killing on behalf of the OCG and CC Osborne, whom is the likeliest suspect for The Fourth Man. Precisely why Thurwell was killed depends on how long the bodies have been there (see below). If it’s months or even a year, then it’s possible the order was given at the same time as the order to kill Gail Vella. Osborne would have been cleaning house, so to speak, to avoid any connection being made between him and organised crime. If Thurwell was killed more recently, it could have been after AC-12 identified him as the link between the cover ups of the murders of Lawrence Christopher and Oliver Stephens-Lloyd. Let’s suppose that Patrick Fairbank was faking his senility last episode, and as soon as Steve and Chloe left, he contacted Osborne to say that AC-12 were onto Thurwell. Then it would have been adios Marcus.

How long has Thurwell been dead?

A while. Jo Davidson received the order to “get rid of” Kate on the 24th of November, and the shoot-out with Ryan happened the next day. Then Kate and Jo spent a night in custody, before Jo was charged on the 26th, and Kate went back to work, assuming command of MIT on the 27th or 28th. Those corpses showed much more than four days’ worth of decomposition, indicating that it couldn’t have been Thurwell who gave Jo the order to kill Kate because he’d been long dead.

But the Unknown User had an IP address in Spain?

It’s easy to disguise an IP address by rerouting it through another country using a virtual private network or VPN. Osborne could have made it look as though his messages were coming from Spain, protecting him further and potentially incriminating his former partner in crime, Thurwell.

Carmichael’s priority is clearly protecting CC Osborne and undermining the work of AC-12, which either makes her bent (assuming, as we do at this stage, that Osborne is The Fourth Man/H) or a careerist kiss-ass with both eyes on her next promotion. My money’s on the latter, though there is a mountain of evidence against her, as follows:

Back in series five, Pat did her damnedest to have Ted charged as corrupt, which played into the OCG’s plan but could equally have just been down to her being a ladder-climbing prick. In series six, she removed surveillance from Kate and Ryan, which also played into the OCG’s hands but could equally be down to her CC-pleasing budget cuts. She also colluded with Osborne to place trackers on AC-12’s personal vehicles, which obviously helps the OCG but could just the same be a result of sour grapes. Carmichael knows that Jo is lying about Ryan’s death to protect Kate, and has told Kate as much, describing herself as not gullible but pragmatic. I’d say that covers it. She’s pragmatic insofar as it helps her career, and totally insufferable, but bent? Not convinced.

Why did AC-3 put trackers on AC-12 vehicles?

Because Carmichael would do anything CC Osborne says, and he needs to know where AC-12 are at all times now that they’ve solved the Vella murder and are getting close to the truth about him.

Who were those prison guards at the end?

Alison Merchant and Jenny Leland, bent employees of a private security service at HMP Brentiss, the woman’s prison where Lindsay Denton, Roz Huntley, Farida Jatri and others were sent down. Those two attacked Denton Denton in series two, and Merchant was the one who broke Farida Jatri’s wrist to stop her from talking to AC-12 about being framed by Jo. Like the bent prison officer who facilitated Lee Banks’ murder of Jimmy Lakewell, they’re in the pay of the OCG and obviously represent a threat to Jo’s life. Hopefully those CCTV cameras will keep her safe.

Amanda Yao from Cybercrime is useful isn’t she?

Like Carmichael, he’s either in league with the OCG or there’s another explanation. Pat’s explanation would be career-minded toadyism, Buckells’ would be that he doesn’t have the brainpower to corrupt himself out of a paper bag. Buckells is lazy, unreconstructed, unethical, and a bad copper who’s been promoted beyond his ability. There’s a chance though, that he’s their useful idiot and has been routinely exploited by higher-ups Thurwell and Osborne, because it’s easy to pull the wool over his eyes.

We know that Jo manipulated Buckells to mess up the surveillance authority on the Carl Banks pick-up, and that she got him to delay the raid until the next day. Jo though, didn’t cop to orchestrating the fake witness statement from Buckells’ ex-girlfriend Deborah Devoreux, or putting Ryan Pilkington on MIT. Buckells might have done the former because he wanted the evidence to lock Terry up regardless of whether or not he was guilty, which shows you exactly what kind of police officer he is. Either way, a disgrace to the uniform.

She’s worked on behalf of the OCG throughout her police career, so technically yes, she’s a corrupt copper. However, that corruption was all carried out under duress, none of it was done to benefit Jo directly or at her behest. The more jobs she did for the OCG, the more blackmail material they had over her, so right from the start, she was caught in an inescapable trap. Stop working for them, and have her life destroyed, squeal on them and get killed… she had no choice.

In fact, Jo seems to have a strong moral centre. In episode six, she copped to all the corruption she did and exonerated Terry Boyle, Farida Jatri and Ian Buckells, as well as taking the rap for Kate shooting Ryan. With her family background, she’s also desperate not to be thought of as bent, explaining her sudden noble turn.

Is CC Osborne The Fourth Man?

If he isn’t, then nobody is. There are no other candidates, and it all adds up. The two-faced bastard.

What are they going to find under the cement at the workshop?

With any luck, some evidence that would conclusively link CC Obsorne to organised crime. Drugs? Guns? Dead bodies? A load of hooky cash he was saving for his retirement? Whatever it is, it must have been a priority to retrieve, because whoever is giving the OCG goons their orders sent them straight to retrieve it as soon as Ryan leaked MIT’s industrial unit raid plans.

Line of Duty concludes on Sunday the 2nd of May at 9pm on BBC One.