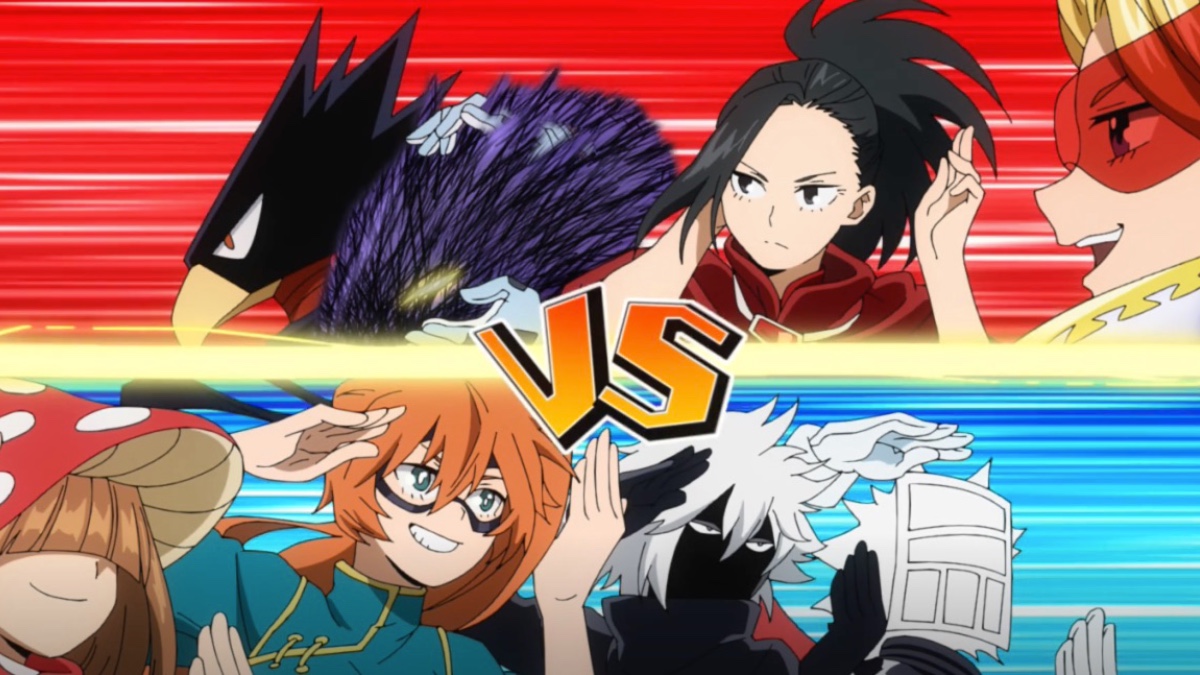 “We’re birds of a feather.”

Battles are chaotic and it can be easy to focus on only the immediate danger within them. Survival can give the illusion of strength, but sooner or later this facade crumbles away without the right preparation. “Operation New Improv Moves” is an exciting My Hero Academia episode that presents another grueling fight between the students of Class 1-A and 1-B, but it also speaks to how essential it is to adopt a bird’s eye view perspective. This vantage point, which considers the whole situation and doesn’t get lost in the specifics, proves to be fundamental in not just battle, but also life. Hawks emphasizes this to Fumikage Tokoyami during his internship and it’s a pivotal lesson for his current clash against Class 1-B.

“Operation New Improv Moves” does primarily focus on the second battle in this Joint Training Arc, but it’s exciting that the first fight’s conclusion still has everyone abuzz. Midoriya’s brawl isn’t for a while, but he already can’t help but devise a strategy with Mineta. Mina Ashido’s Instant-Kill Floating Ball also better be the Chekhov’s Gun of this Joint Training Arc. This season has largely been fun and games so far, but it’s nice to see a fire get lit under everyone as their competitive instincts become unleashed.

Shinso and Asui were the big stars of last week’s win for Class 1-A, but they’re still frustrated over their inability to pull off a flawless victory. It’s a throwaway moment, but All Might actually dwells on it quite a bit with the other Pro Heroes. They break down why “frustration” is the perfect emotion to feel after a victory and that there are few expressions that are more representative of a hero. Shinso and Asui’s self-criticism expands into general pointers for the entire team by Shota Aizawa.

This is a stretch of episodes that’s designed to be about combat, but it’s appreciated that the previous fight’s results are studied. The entire team learns how they can generally improve upon their performance and it opens the door for all of these characters to debut new strategies whenever they’re next in the spotlight. In contrast, Vlad pushes much more of a tough love approach on Class 1-B’s students. They receive derision and frustration more than they do encouragement and advice.

Class 1-B also exhibits some reverence towards Kirishima and other heroes for their work against the Shie Hassaikai. It’s a fleeting detail, but it helps continue to flesh out My Hero Academia’s growing world. Some of the students from Class 1-A have achieved remarkable things, even by Pro Hero standards, and so it’d be kind of ridiculous if nobody was talking about it. It also plays better that Class 1-A doesn’t get cocky from these past achievements and it’s instead their opponents that mystify them through these rumors over their past.

“Operation New Improv Moves” provides an especially exciting and eclectic mix of fighters. From Class 1-A is Tokoyami, Hagakure, Yaoyorozu, and Aoyama, all of which have extremely unique Quirks that have never fully gotten their due yet. Class 1-B pulls together just as interesting of an assortment of heroes.

Itsuka Kendo has gotten some attention before in the series, but the rest represent some of Class 1-B’s weirdest individuals, with Quirks that pull from mushrooms, comic onomatopoeia, and living darkness. Before literal darkness takes over the battlefield, there’s some metaphorical shade thrown at Yaoyorozu from Kendo over how they both “fit into the same box.” A very “there can only be one” Highlander mentality begins to fester between students, but it’s best reflected in Tokoyami and Kuroiro.

Everyone in this fight has a lot to contribute, but it ultimately turns into a war between shadow-centric Quirks between Fumikage Yokoyami’s Dark Shadow and Shihai Kuroiro’s Black Quirk. It was inevitable that My Hero Academia’s Joint Training Arc would pit counterpoints of characters against each other, but “Operation New Improv Moves” is thrilling rather than predictable simply because Tokoyami and Kuroiro’s Quirks are so powerful and mysterious.

This season’s secret weapon continues to be an inspired use of Quirks when it comes to battle strategy rather than victory through brute force. Tokoyami’s Dark Shadow can unleash vicious attacks, but here he uses its size and maneuverability to scout the entire field and immediately locate the enemy. Unfortunately, Tokoyami’s increased aptitude with his Quirk only becomes more of an advantage for Kuroiro. Kuroiro’s Black Quirk allows him to commandeer Dark Shadow and turn it against Tokoyami’s team in a very powerful display.

What’s also so effective about the competitive nature between Tokoyami and Kuroiro is that it functions as this collective origin story for this rivalry. “You and I share a destiny,” Tokoyami coldly hisses at Kuroiro. “Operation New Improv Moves” successfully turns two fringe characters into individuals that feel like they could fuel their own spin-off, which is really the power of My Hero Academia’s characterization and what this new season has the ability to tap into. I’m not sure if Tokoyami’s accusation that Kuroiro is a “Dark Fallen Angel” is based on anything, but it’s a straight up savage burn and an effective way to label your opponent as the villain in this feud.

The choreography around Tokoyami’s flailing Dark Shadow and Shihai Kuroiro as they move around the pipe-filled area gives this episode such a gripping visual quality. It’s easily one of the best uses of an environment for a fight that My Hero Academia has ever done. Both the Dark Shadow and Black Quirks are already fascinating, but they really get to show themselves off through the labyrinthine nature of the battlefield. The “flying” solution to Tokoyami and Kuroiro’s feud plays well and also feels like natural development for Tokoyami’s character. Deku’s been on the sidelines for a lot of this season, but I love that his reaction to this is a freaking “Egg of Columbus” reference as if it’s a totally natural thing to reference in this situation.

It comes as a surprise when the episode jumps back in time a few months to chronicle Tokoyami’s Quirk development alongside Hawks, but it’s an approach that actually really works well despite how it stops the action dead in its tracks. Not every episode should resort to this strategy, but it provides valuable context for not only Tokoyami’s evolved powers, but also the ideology that drives him forward. More Hawks is also never a bad thing.

Tokoyami and Kuroiro are mostly able to resolve their fight, but that’s merely one piece of this busy battle. The final moments of “Operation New Improv Moves” initiates “Plan B” where Kinoko Komori unleashes a fungal apocalypse on the battlefield that forces Class A to quickly develop a new battle strategy that carries over into the next episode.

When it comes to the supporting players in this fight, I’ve always been very skeptical of Yuga Aoyama and his Navel Laser Quirk as anything other than comic relief, so I was kind of hoping that this battle could legitimize the hero. “Operation New Improv Moves” features more smart use of Quirk application since both Aoyama’s Navel Laser and Toru Hagakure’s Invisibility Quirk both make use of light refraction, which allows them to actively mess with Kuroiro’s strategy. Aoyama still isn’t elevated above a novelty supporting character, but this does allow him and his Quirk a little more depth that goes a long way. It’s possible that both he and Hagakure will both have more to do in the concluding half of this encounter.

The animation in this episode that brings these fast-paced Quirks to life is a triumph, but Yuki Hayashi’s score is so excellent here that it deserves some special attention. Hayashi has never been a slouch, but he’s seriously upped his game for this season and every scene becomes more powerful thanks to the operatic music that accompanies these tense moments. It’s the first time in a while that the series’ music consciously stood out to me in terms of its ability to match the animation.

If there’s any major problem to this season of My Hero Academia so far is that there’s a strangely reflective quality to the episodes that bides a lot of time and leaves every episode feeling padded. This look to the past makes sense on some level since this season is all about a reunion and a chance at redemption between 1-A and 1-B from the events of season two’s Sports Festival. However, “Operation New Improv Moves” definitely gets indulgent in this regard. There are several moments where U.A. High’s faculty reflect on the progress that their students have made, which it’s possible to do without devolving into full-on flashbacks of old footage.

All Might’s memories about Midoriya even feel trumped up to some degree and certain moments like his performance in the School Festival concert shouldn’t necessarily be included among Midoriya’s mastery of One For All or his defeat of Kai Chisaki. My Hero Academia is a rare example of a shonen series that doesn’t get lost in filler material and it’s an incredibly faithful adaptation of the manga, but sometimes the cost of this is episodes that subtly run the clock and don’t really get moving until the halfway mark. When “Operation New Improv Moves” is focused on battle it’s absolutely fantastic, but it shouldn’t have to tiptoe around its action to this degree.

“Operation New Improv Moves” could be a tighter episode in some areas, but it still succeeds and even improves upon last week’s solid battle. It’s comforting that My Hero Academia allows this fight to spill over into the next episode and that every showdown in the Joint Training Arc won’t have the same “one and down” structure to it. There’s a strong mix of action, character development, and emotion through this exercise and it does exceptional work to highlight some of the anime’s unsung heroes. This battle continues to rage on, but Tokoyami’s narrative softly receives resolution as he passes the torch over to Yaoyorozu for the next leg of this confrontation.