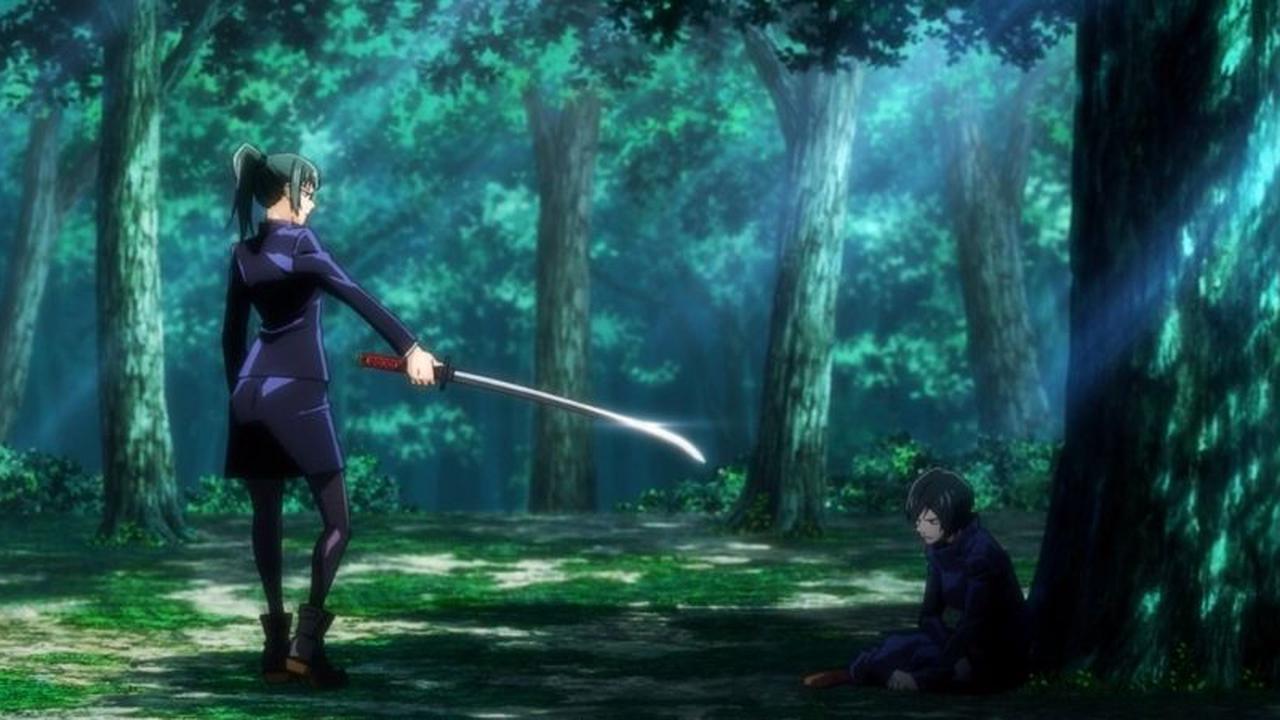 For many anime fans, Jujutsu Kaisen shone as the highlight of the Fall 2020/Winter 2021 season. There are many possible reasons for this hype: The series delivered more sought-after supernatural action on the heels of 2019’s breakout hit Demon Slayer. Its darker approach both set Jujutsu Kaisen apart from its predecessor and offered a cathartic escape during a global pandemic. Studio MAPPA adapted Gege Akutami’s original manga with memorable visuals and smooth animation. After all, who can forget the first time Gojo tangled with Sukuna or used his mind-bending domain expansion technique?

But what’s most striking about Jujutsu Kaisen are its fight scenes. Even the show’s detractors will agree that, through clever action cinematography, the series showed us how well-executed sequences can elevate the otherwise simple premise of a boy who gets possessed by a demon. Less remarked upon, however, is how those same fight scenes utilize Jujutsu Kaisen’s female characters.

Jujutsu Kaisen’s portrayal of its female characters has won the series many fans. Episode 17: “Kyoto Sister School Exchange Event – Group Battle 3” drew widespread acclaim with its on-screen acknowledgment of the struggles women face in an overtly sexist society. What went less remarked upon was the backdrop against which those declarations took place.

Longtime shonen fans are familiar with what can be called “the obligatory girl fight.” It’s the match-up between two female characters. Sometimes, they’re the only female characters from the series in question. One variation may feature one-off declarations of throwing away their femininity through a dramatic cutting of hair. Another, sadly more common type uses the opportunity for gratuitous, male-driven fan service.

On its surface, Episode 17 showcases the obligatory girl fight. But in many ways, the explicit examination of the impossible standards that women are held to tells the audience this fight is anything but obligatory. And, even if any doubts remained, we need only look at the actual fights that occurred during the episode: Maki Zenin kicks her opponent off a cliff. Nobara Fugisaki nearly destroys the surrounding forest to take down broom-riding Momo. Mai Zenin, Maki’s twin, defeats Nobara with what could be called a cheap shot: sniping her from a distance while the other girl verged on defeating her opponent.

These observations may seem like small things, but they’re notable when looking at the history of female fighters in shonen series. In generations past, shonen’s female characters often found themselves relegated to support roles. They’re healers and medics. They patch up the other (male) characters’ physical and emotional wounds. Their abilities, despite being often presented as without peer, are used in the most benign and inoffensive of ways. Is she physically the strongest person in the entire series? Perhaps, but she would never hit a person using her full strength. She hits things, not people—even if that person is doing everything in their power to kill her.

When Maki kicks Kasumi Miwa off the cliff in Episode 17, she doesn’t hesitate. She presses her advantage. When you fight, you fight to win. And in their line of work, the physical injuries sustained from such a fall are nothing compared to the potential threat from facing and exorcising a cursed spirit. Mai’s attack may be considered cowardly, but the results can’t be denied. She eliminated Nobara from the competition. This isn’t to say that every female character in a shonen series should be bloodthirsty. That defeats the purpose of seeking multidimensional female characters in our media. But if a woman works in a dangerous occupation like that of a jujutsu sorcerer, she must accept the routine necessity of violence.

Unlike other shonen series, we don’t see the female characters grapple with that reality in Jujutsu Kaisen. The women have already come to terms with those expectations. In the case of Maki, the acceptance is crucial. Born with no cursed energy—something most jujutsu sorcerers have—she has no choice but to rely on her physical abilities. And make no mistake, she makes good use of them. She’s allowed to be strong in the same way that series protagonist Yuji is strong. She fights hard. She’s often the first to land a hit on an otherwise untouchable enemy. She can emerge from an encounter unscathed whereas her male ally is not so lucky. Individually, these are small things but together, they add up over time.

Nobara, on the other hand, reminds us that women don’t have to accept the unfair expectations placed upon their gender. In her memorable speech from Episode 17, she proudly states that she loves being strong as much as she loves dressing up and looking pretty. Embodying both may seem like a contradiction for the shonen female heroine, but Nobara is a study in contrasts right down to her signature technique. Her trademark ability involves hammering nails through a straw doll that represents her enemy. What the audience may not realize is that the technique has roots in a traditional Japanese curse ritual where scorned women nail effigies to trees. Nobara isn’t a scorned or rejected woman, however. Instead she’s adopted a process associated with feminine vengeance and transformed it in a brutal attack.

We see Nobara’s technique in action throughout the entire series, but it takes center stage in “Accomplices,” Jujutsu Kaisen’s season 1 finale. During the episode’s climatic battle, Nobara is underestimated by their enemies like many female characters in shonen series before her. And why not? Her partner, Yuji, serves as the host to Sukuna, the King of Curses. He is the more obvious threat. But in a stunning reversal, it’s Nobara who becomes far more dangerous to their enemies. She may not host a demon nor does she have intimidating physical abilities, but she has a quick mind for strategy and an understanding of the sacrifice required for victory. The ensuing action-packed scenes show us a battle where Yuji and Nobara fight as equal partners. Neither is more important or weaker. The girl doesn’t need protecting. She doesn’t need saving. In another shonen series, the fight’s conclusion would highlight Yuji’s protagonist status by giving him the final strike. But even here, the success of Yuji’s punch relies on Nobara’s long-distance attack.

In Season 1, Jujutsu Kaisen gives us fight scenes where women play crucial roles. They weaken and delay opponents to give time for stronger combatants to arrive. More than that, it gives us women who enjoy fighting. They defeat enemies with a self-satisfied smirk on their faces. They smile as they promise to deliver death. In Jujutsu Kaisen, the women aren’t constrained by being nice. They’re allowed to be ugly and brutal. And because of that, their fight scenes show us what female characters can accomplish when they’re allowed to move beyond agonizing over a violent life and instead embrace it as a requirement of their chosen profession.

Season 1 of Jujutsu Kaisen is currently streaming on Crunchyroll.

Who is Your Favorite DC Character? | DC FanDome
American Horror Story Season 8 Episode 1 Review & After Show
Dune: Will There Be a Dune Part Two?
Why The Sopranos Prequel Series Is a Bad Idea
Charles Addams Biographer Defends Addams Family Values