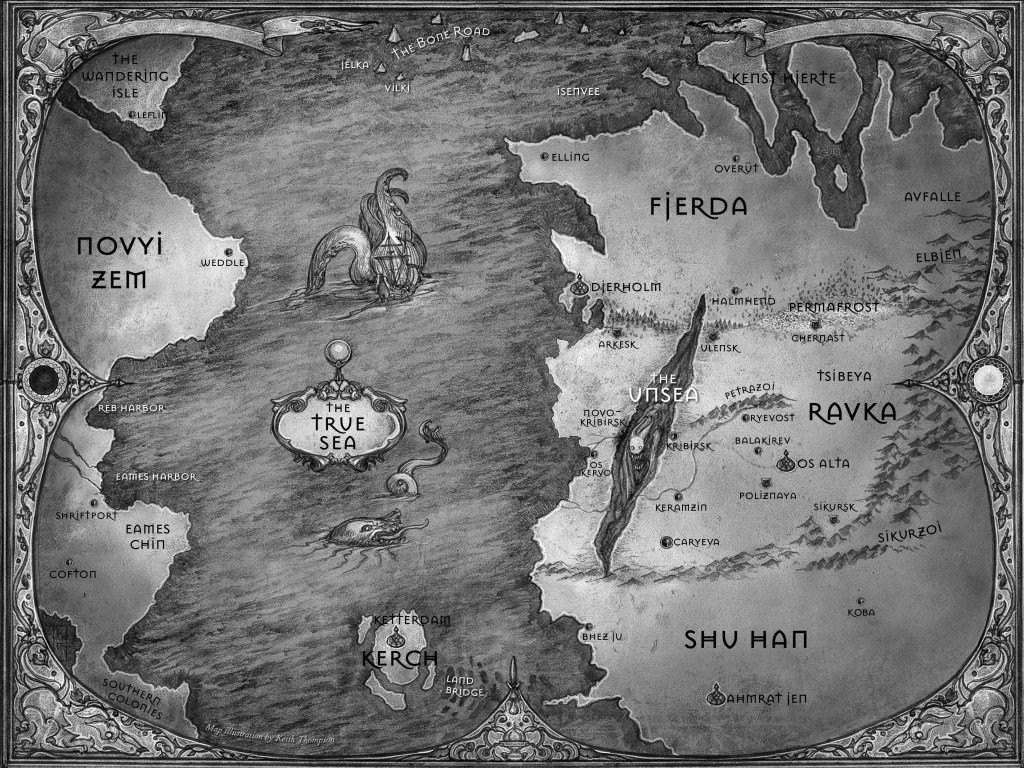 Netflix’s adaptation of fantasy epic Shadow and Bone has a lot going for it, but articulating a sense of setting isn’t one of them. While readers of Leigh Bardugo’s Grishaverse books may be able to spot the difference between a Fjerdan and a Ravkan, your average viewer coming in cold might need a little help explaining the cultures and geography of this Russian-based fantasy world. We’ve got you covered…

Where is Shadow and Bone set?

Shadow and Bone is set in a fictional world where some people, known as Grisha, have magical powers.

Most of the main action in the first season of Shadow and Bone is set in Ravka, a kingdom that is fighting a war on two fronts: with Fjerda, its neighbor to the North, and with Shu Han, its neighbor to the South. But Ravka has its own internal problems, too. The kingdom has been bisected by a swathe of literal, monster-hiding darkness called the Shadow Fold (or the Unsea) for hundreds of years. The Shadow Fold keeps the bulk of Ravka from having easy access to the sea, and West Ravka from having easy access to the rest of Ravka.

Os Alta is the capital of Ravka, and it’s where the Grand Palace (where the king and queen live) and The Little Palace (where General Kirigan lives, and the Grisha are trained) are located. Ravka is a relative safe haven for Grisha, who are stigmatized and hunted in other parts of the world. In Ravka, they make up the Second Army. The First Army is composed entirely of non-Grisha. Well, and Alina.

The part of Ravka that is located west of the Shadow Fold and therefore cut off from Os Alta and Ravkan rulers, West Ravka has its eye on secession. Novokribirsk is a port city in West Ravka that sits on the coast of the True Sea, giving West Ravka its own strategic advantages.

Fjerda is located to the north of Ravka, and is at war with the Ravkans. Fjerda is home to the drüskelle, an order of warriors who hunt and murder Grisha because they believe Grisha are evil witches. Rude. In Shadow and Bone, we meet Matthias, a drüskelle who has grown up believing this lie… until he meets and gets to know Grisha Heartrender Nina. The two end up in Tsibeya, a frozen tundra region in the northeastern region of Ravka that borders Fjerda.

We don’t get to spend much time in Kerch in Season 1 of Shadow and Bone, but it makes quite an impression. An island country located west of Shu Han in the True Sea, Kerch is where Six of Crows takes place and where its main characters live. When we meet Kaz, Inej, and Jesper, they are all in Ketterdam, which is the capital city of Kerch, known for gambling and other commerce.

While we don’t actually get to visit Shu Han in Season 1 of Shadow and Bone, we certainly hear a lot about the Shu, the people who hail from this land south of Ravka. Alina is part Shu, and often has to deal with the racism that comes along with this. Ravka is at war with Shu Han. The Shu Han is also not a very safe place for Grisha, as the Shu capture and experiment on the magical folks.

The real-world inspirations for Shadow and Bone’s settings

While Shadow and Bone is 100% a fantasy book, Bardugo, an Israeli-American author who was born in Jerusalem and grew up in Los Angeles, drew inspiration from some real-life people and cultures in building her fictional world, most specifically using Tsarist Russia as the basis for Ravka, Scandinavia as a loose inspiration for Fjerda, and China and Mongolia as inspiration for Shu Han.

Back in 2012, when Bardugo was talking to The Atlantic about her new YA novel, she said: “I love the standard fantasy setting of Medieval England and Medieval Europe, but I wanted to go somewhere different. I got into the world-building phase, I went to a used bookstore, and I was poking through old travel books and textbooks, and I came across this Russian imperial atlas. There was a cover with three men in fur hats next to a sledge in snow. I started flipping through it, and it had trade logs, and military campaigns, and shifting borders, and pretty much instantly I knew this was the right world for the book.”

Kerch, the primary setting for Six of Crows, is inspired by the Dutch Republic of the 18th century, which is why its capital city is called Ketterdam, after Amsterdam.

Shadow and Bone is available to watch on Netflix starting April 23rd.

Power Rangers: Red Rangers Ranked from Worst to Best
Who is Euphoria For?
How Matt Damon Helped Ben Affleck Quit Batman and the DCEU
How Sanford and Son Cleaned Up Redd Foxx’s Act to Create a TV Icon
Meet Naomi, The New Superhero on The CW Block