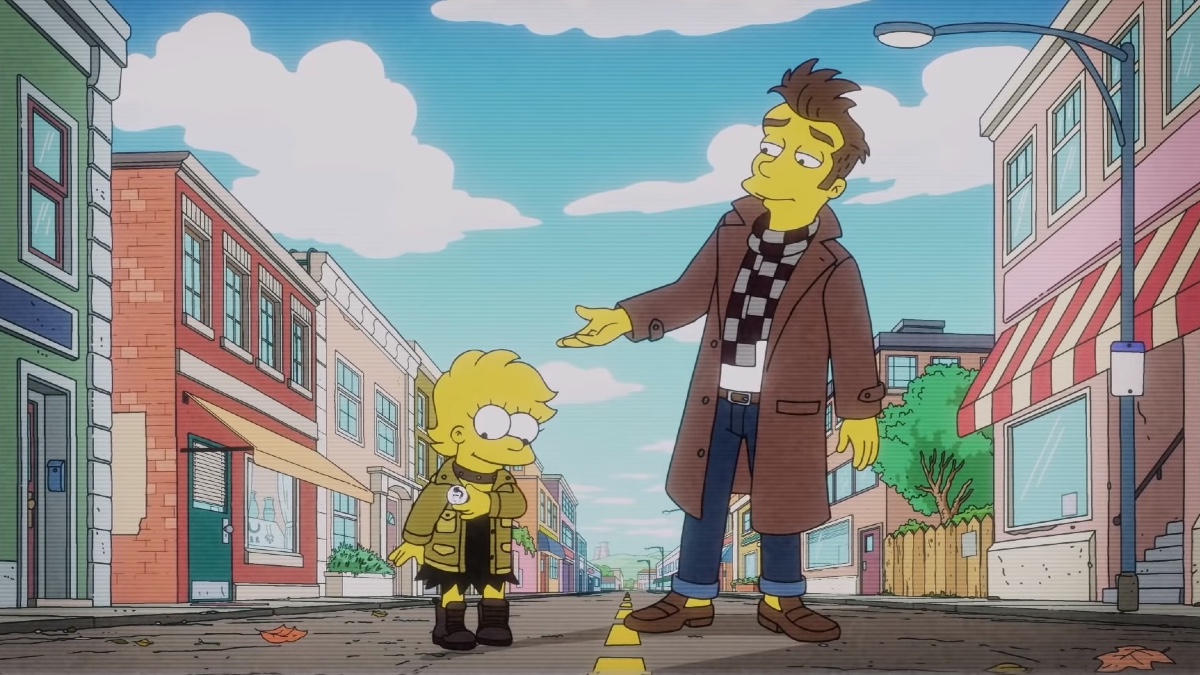 The Simpsons aired one of its most pointed parodies this past weekend, “Panic on the Streets of Springfield,” and the hits keep on coming. Animation Domination on FOX dropped “Everyone Is Horrid Except Me (And Possibly You),” the new music video by Quilloughby (with Lisa Simpson), which came out on The Snuff’s label, Total Despair Records.

The lyrics are inspired sub-genre satire. “Everyday I try to smile, but can’t help but frown, Every day I draw my bath and pray I will drown,” Quilloughby (voiced by Benedict Cumberbatch) sings, and heaven knows he’s miserable, now and forever. Listen and abandon hope.

The song captures the feel of the nihilistic depression rock of days past, and the episode caught the eye of the sardonic satiric subject.

The episode’s guest character, Quilloughby and his band The Snuffs, is a more-than-farcical sendup of Morrissey, lead vocalist and lyricist for the Smiths, an ‘80s band that made depression hummable and declared meat murder. The songs were co-written by fans of the anti-Brit-pop outfit, the episode’s writer Tim Long, and Bret McKenzie of Flight of the Conchords. But, like Lisa in the episode, even the most fanatic aficionado can lose their hero worship when confronted by the real thing.

Long told Stereogum the Snuffs were an amalgamation of a few teen alienation artists, including the Cure’s Robert Smith and Joy Division’s Ian Curtis. But only one of those bands’ shows sound like a “three-hour dance party in a freshly dug grave.”

Morrissey released 13 solo albums and consistently toured since the breakup of the Smiths in 1987. Quilloughby is a recluse who stopped performing when the Snuffs broke up. The character first appears as Lisa’s imaginary friend. A fragment of her damaged psyche, forever frozen in the suitable-for-framing image of his youth. By the time Lisa sees the real Quilloughby and the Snuffs in a comeback concert, he’s become an overweight, meat-eating, xenophobic shadow of his former self.

Not every day is like Sunday for Morrissey, who responded to the episode in kind. “I’ve had enough horror thrown at me that would kill off a herd of bison,” he wrote on his website. Quick to head off any further misrepresentations, Morrissey’s manager Peter Katsis took to the songwriter’s Facebook page to remind Simpsons viewers that the singer “is still a super vegan … and strong supporter for animal rights.”

The former Smiths frontman drolly noted how the series is noted for cutting corners: Animators drop a finger from each hand for cheaper frames when rendering cartoons, backgrounds often run on loops. “Writing for The Simpsons, for example, evidently requires only complete ignorance,” Morrissey wrote.

The Snuffs came up on Lisa’s suggested playlist after she’d given a thumbs down to every other suggestion. “If you hate everything, you might like this,” fictitious streaming channel “Splapify” promised. This offers little consolation for the singer. “In a world obsessed with Hate Laws, there are none that protect me,” Morrissey wrote.

Katsis condemned the show for depicting Quilloghby as a “racist, without pointing out any specific instances.” Morrissey is a strong and vocal supporter of Brexit, which would pull the United Kingdom from the European Union. The singer also takes issue with England’s immigration policies, allied himself with the far-right political party For Britain, and reportedly subscribes to the white nationalistic “Great Replacement Theory.”

In response to The Simpsons parodic accusations on Morrissey’s move from the socialist Red Wedge movement to the reactionary response, the singer wrote that he feels “free speech no longer exists.” He’d sue, if had the chance. “The hatred shown towards me from the creators of The Simpsons is obviously a taunting lawsuit,” Morrissey wrote, “but one that requires more funding than I could possibly muster in order to make a challenge.”

The Simpsons airs Sundays at 8 p.m. on Fox.