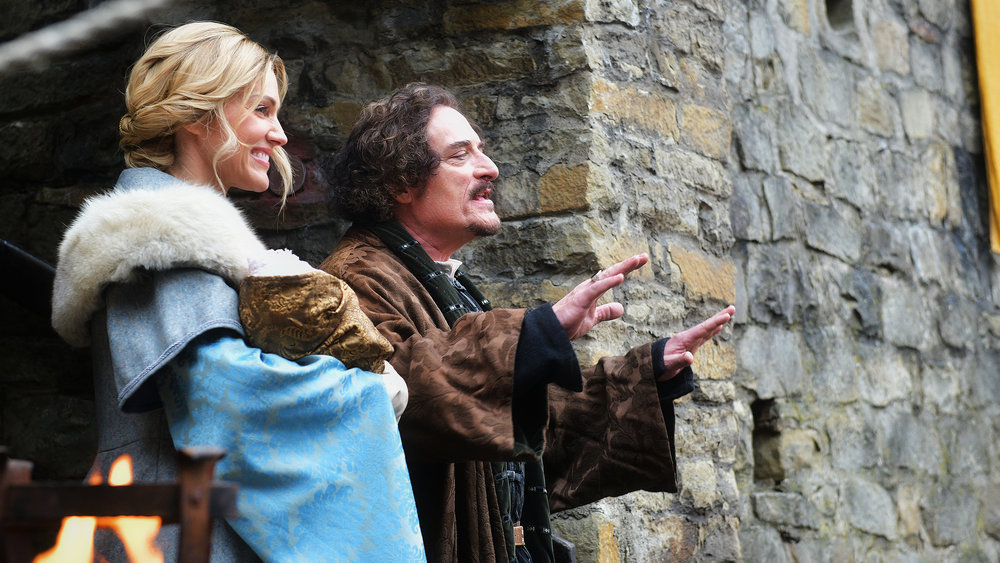 From the dynamically retooled opening title sequence to the Jack-centric Transylvania storyline, it takes only moments to recognize that Van Helsing’s fifth and final season promises to take fans on a wild ride as it brings to a close its delightfully circuitous tale of horror’s most iconic vampire hunting family. Season premiere “Past Tense” doesn’t represent the first time the Van Helsing family story finds itself in the past, but there seems to be a more concerted effort this time to employ traditional time travel elements as the unanswered questions mount.

It’s been sixteen months since the season four finale, but the head of the Van Helsing clan remains noticeably absent from the story even though her imprint is unmistakable. Fans of the series understand Kelly Overton’s (Vanessa Van Helsing) pregnancy last season limited her participation, and though she doesn’t appear in the season premiere, Nicole Muñoz (Jack) and Tricia Helfer (Olivia/The Dark One) deliver strong performances that skillfully carry the episode. Still, where’s Vanessa?

Before we address Vanessa’s whereabouts, however, it’s the stunning narrative redirect showrunner/writer Jonathan Lloyd Walker and director Jonathan Scarfe (Axel) throw at viewers that suggests a new approach to bringing the vampire apocalypse to an end. What appears to be a truth on Van Helsing doesn’t always play out the way we think it will, but when Jack leaves the Dark Realm and finds herself in renaissance Transylvania, there seems to be only one logical explanation – time travel. You have to love that Jack immediately recognizes the drastically changed landscape and sets out to take care of business.

Vanessa apparently still resides in the Dark Realm, but it seems clear that she’s the catalyst for Jack’s temporal journey to Dracula’s city of origin.  Of course, Jack’s experience here could turn out to be similar to Vanessa’s meeting with her grandmother Lily in season three,  but for now, we have to consider conventional time travel as the most likely scenario. Needless to say, time travel in the hands of a less skilled writer can lead to a multitude of narrative pitfalls, but with Walker (Continuum) at the helm, the story is in more than competent hands. Still, we have to wonder how Vanessa’s role will play out since it seems reasonable to assume that if she can send Jack to the past, she can leave the Dark Realm at any point herself. So why does she stay?

Once we learn that Count Dalibor’s wife Olivia (Tricia Helfer) may, in fact, be the genesis of the Dark One, it’s only a matter of time before she and Jack come face to face. It doesn’t take long for viewers and Jack to face the quintessential time travel dilemma: if you could go back in time and kill baby Hitler, would you? Traveling to the past to prevent an apocalyptic future has become a science fiction staple, and Jack now faces the ultimate moral decision. “Now I know why my mother sent me here.” Understanding Vanessa’s motivation is one thing, whether she can carry out this gruesome task is quite another.

While it might be simpler to have Jack kill Olivia and prevent the 21st century evil that plagues the American northwest, other options do exist. “What if you could stop what turns her dark?” Florian (Matúš Kvietik) asks a reticent Jack. Unfortunately, the Transylvanian problem is far more complex than simply eliminating new mother Olivia. Actions have consequences, and if time travel tales tell us anything, it’s that unintended consequences generally rear their ugly heads sooner rather than later. Whether it’s the Grandfather Paradox or the Butterfly Effect, things rarely turn out the way the protagonist thinks they will.

Not surprisingly, Helfer (Battlestar Galactica; Lucifer) seamlessly transitions from the dark, ultra evil creature at the heart of the vampire threat to a loving wife and new mother who unknowingly sells her soul to Michaela and the roots of the Sisterhood. Nonetheless, the plot thickens because killing Olivia and preventing her from becoming the Dark One only takes care of one problem. What about the Sisterhood? Jack and Ivory already killed Michaela in the present, but now Jack can prevent her from creating and expanding the Sisterhood and becoming the Dark One’s bride. Does Jack have it in her to commit what will seem like multiple atrocities to the innocent bystanders who possess no knowledge of the future from which she comes?

Olivia’s role in the coming apocalypse isn’t as cut and dried as it might seem, and when Florian shows Jack the portrait of the count and countess, it’s her last name that stimulates Jack and the fateful decision she ultimately makes. Dracula. Did Vanessa actually send Jack to this point in time with the intention that her daughter could operate in the role previously ascribed to her – mankind’s savior?

Nobody said saving the human race was going to be easy, and we most certainly didn’t expect the Van Helsing storyline to end up in the middle of a Renaissance street fair, but it’s a perfect vehicle for Olivia to meet another major player on the dark side.  “I see two futures diverging,” the fortune teller (Jesse Stanley) tells Olivia, and the woman who will eventually become the Oracle, informs her that two women wish to shape her fate. “Something dark awaits you.” And Jack’s kill list grows taller by the minute.

“I told you; vampires, and I’m the cure,” Jack explains to Florian, but the subtext here implies something quite different than her ability to return victims to the human state. Micheala (Heather Doerksen) wishes to resurrect someone and begins brewing a potion that seems to affect both Jack and Olivia and sets into motion an act which can’t be taken back. We’ve witnessed this watershed moment many times before, and too often the hero hesitates and allows evil to escape. Not this time, however. Jack plunges her dagger into Olivia’s throat. “I’m sorry; I had to.” This is not the first person Jack has killed, but it will be fascinating to watch the effect this murder has on her personality. Still, if she’s to prevent the dark future, there are at least two more deaths to consider.

“Do not get enchanted by whispers of magic and monsters,” Dalibor (Kim Coates) tells Florian, laying the groundwork for Jack’s revelation that vampires are real and must be stopped. However, Jack’s in a difficult situation since the “I’m from the future,” explanation rarely yields positive results. It’s early, so we don’t know if Vanessa has an exit strategy planned for Jack, but for now, she’s on her own. Is Florian enamored enough of this stranger to overlook the murder of his beloved countess, or can Jack offer some kind of proof that everything she says is true? And how will Dalibor handle his wife’s brutal killing? No one ever said the Dark One has to be female.

Over the course of five seasons, series creators and showrunners Simon Barry, Neil LaBute, and now Jonathan Lloyd Walker have managed to lure some of genre television’s finest actors for guest spots and recurring roles, and “Past Tense” continues this trend. Filming inside a real Slovakian castle takes the Van Helsing world building to another level which works brilliantly with Jack’s journey to the past, and though it’s likely only a brief paradigm shift, the intriguing introduction of time travel into the overall arc helps assuage the momentary loss we feel in the absence of the core characters. Vanessa will be back. The future’s not as clear for Violet, Doc, Axel, Ivory, and Julius who are still out there somewhere.