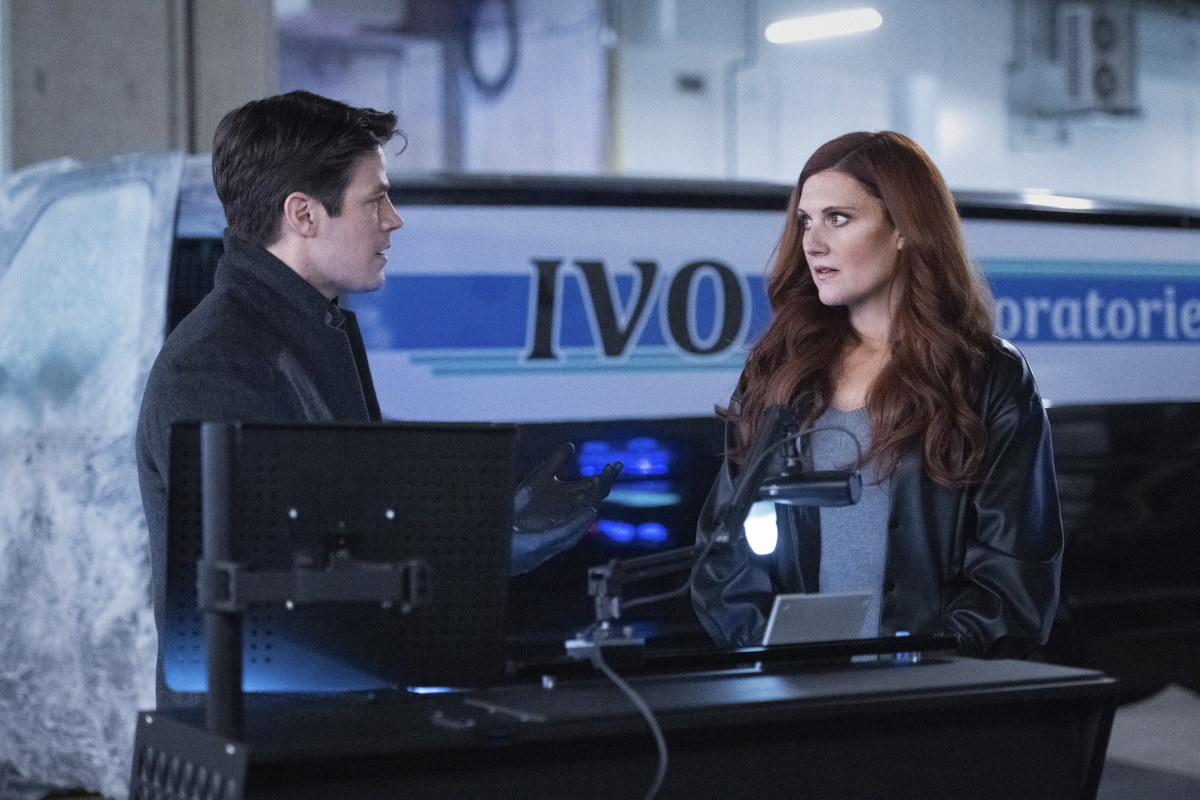 This article contains The Flash spoilers.

It’s not an exaggeration to say that The Flash has never done the greatest job explaining what the Speed Force is, how it works or how Barry Allen is meant to relate to it. The show has alternately depicted it as a sentient collective, a wellspring of power, a physical location in which various people – including Barry – could be imprisoned for extended lengths of time, an existential test, and a bond that links all speedsters together. It’s been aloof, removed, and overly involved by turns, but most frequently appears wearing an all too human face: That of Barry’s mother, Nora Allen.

Season 7’s “Growing Pains” is hardly the first time we’ve seen the Speed Force hang out with Barry and Team Flash while looking like Nora. But it’s surely one of the worst instances yet, an episode that messily blurs the line between what this entity is supposed to be and do, and full of the sort of cornball cringe that leads those who don’t watch a lot of superhero television – and therefore miss out on the genre’s real nuance and heart – to vow to tune out in future. The fact that I’m saying this about an episode that also includes an extended sequence where Frost ogles a shirtless bartender while Nelly’s “Hot in Here” plays in the background (Talk! About! Cringe!) should really tell you how entirely over it I am.

To be fair, I’ve never been a fan of the way that The Flash continually anthropomorphizes the Speed Force. Part of the reason is the show’s utter failure to pick a lane with what this being/power/thing is supposed to be and how it works. But it’s also because the entire schtick feels so emotionally manipulative, both within the world of the show and outside of it. The Flash counts on the fact that Barry (and us, as viewers) will be so emotionally invested in the appearance of Nora and what she means to our hero that no one will ever notice or care how few of the Speed Force’s actions make any sort of demonstrable sense.

It would be one thing if this were some sort of deliberate choice on the Speed Force’s part, a cosmic being seeking to control its human avatar by using its limited understanding of human emotion to the best of its ability. That, I could get behind. It’s the sort of manipulative thing that an all-powerful force of nature seems like it would do. But The Flash seems to want to have it both ways: A Speed Force that is every inch a godlike being – just one who also happens to sort of be Barry’s mom. Kind of. But not really.

There are roughly a million reasons why this doesn’t work, the most obvious being that the Speed Force isn’t actually human so it sort of sucks at being one, and that the elemental creature wearing Nora Allen’s face has no real connection to Barry’s mother beyond the fact that it looks like her. She often doesn’t even display a consistent personality from appearance to appearance. (The current version appears to be nothing so much as a riff on Janet from The Good Place, and I can’t stress enough how annoying it is.) In short: The Speed Force doesn’t make any sense now and, in all honesty, it never has.

On paper, the idea that Barry might find a parental sort of connection with the power that bestowed his speed upon him sort of works. But this Speed-Force-as-Nora-Allen shacking up at the West-Allen home is not it. Outside of making herself look like a dead woman and having an obvious interest in her avatar’s well-being, the Speed Force is nothing like the woman Barry lost.

She knows almost nothing about him and the beats of his human life, and has never displayed any real interest in them before this point. (Which really should probably be a red flag of some sort to everyone involved but that’s a rant for another day.) As it stands, while watching Iris explain the concept of a comfort blanket to a woman who looks like her husband’s dead mom last week was clearly supposed to be charming; in actuality, it was just deeply uncomfortable and weird.

The Flash has always positioned Barry’s grief over his mother’s death as a defining part of his character – it’s driven so many of his choices as a hero, and is the reason Flashpoint was both created and subsequently undone. But the fact that the show keeps purposefully poking at Barry’s trauma by forcing him to not just occasionally see but regularly interact with and even befriend a creature who wears Nora’s face all the time but displays little of her actual personality – well, at some point there’s no other word for it other than cruel.

“Growing Pains” is the first time the show has ever even openly acknowledged that Barry might find all of this Speed Force Nora business strange and/or uncomfortable. “You don’t know what it’s like seeing someone like that eating breakfast at our table,” Barry tells Iris after she weirdly starts pushing him to go reconcile with the cosmic being currently pouting in their guest room.

Grant Gustin, amazing as always, manages to color a single sentence with enough wistful emotional weight to let us all see a glimpse at the life Barry wishes he could have had with the mom he lost. Who just so happens to look exactly like the aforementioned pouting god being. But, that much-needed moment of introspection vanishes almost instantly, and we’re back to Barry deciding to call the Speed Force Nora and Iris insisting everything will be fine between them because all relationships take work to grow. (Um…what?)

Look, The Flash is just not the kind of show that’s equipped to (or even interested in) really dig into the many emotional scars Barry carries as a result of everything that’s happened to his family. But this is an aspect of the show that’s never worked, and is honestly worse – and more annoying – than ever this season.

Perhaps this is all a roundabout lead-in to whatever Season 7 is actually planning to do with the appearances of the Strength, Still, and Sage Forces. And I truly hope that’s the case, if that means there’s any chance that The Flash is finally aiming to make some sense of this Speed Force mess. Stranger things have happened after all – this very episode finally sees Frost taking responsibility for some of her worst decisions from seasons past in a way I never would have expected a year ago. But I’m not still holding my breath.