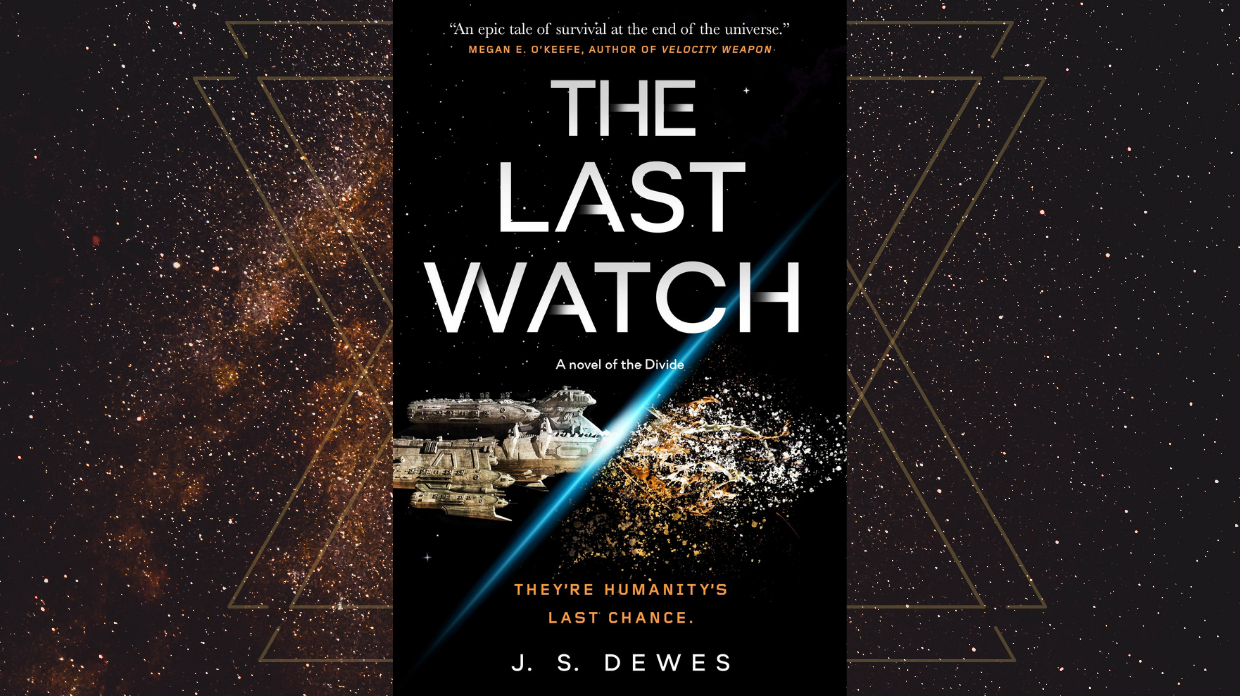 This article is sponsored by

In George R.R. Martin’s A Song of Ice and Fire series, the men of the Night’s Watch are known for “taking the black,” describing the night-dark garb they don when they pledge the remainder of their lifetimes to being posted on the Wall at the northern border of the Seven Kingdoms. Night gathers, and now my watch begins, is the start of their vow upon taking the black. It shall not end until my death. I shall take no wife, hold no lands, father no children. I shall wear no crowns and win no glory. I shall live and die at my post.

Like the Night’s Watch, the Sentinels in J.S. Dewes’ The Last Watch take to the black—that is, they venture out to the very edges of space on essentially a one-way trip for what is a lifetime mission. Described as “The Expanse meets Game of Thrones,” Dewes’ debut shares a kindred spirit with ASOIAF, despite being set among the stars, in its focus on the former war heroes and criminals alike stationed at the Divide, the edge of the known universe, searching for any sign of their long-gone alien enemies. Despite their vast physical distance from the Core of the System Collective Legion, their duty is so integral to the Legion’s continued existence that even children know, through nursery rhymes, what are the stakes: Sentinel, Sentinel at the black, do not blink or turn your back / You must stand ready to stem the tide, lest Viators come to cross the Divide.

For all its thematic comparisons to a particular fantasy faction, The Last Watch occupies a science fiction subgenre that has long compelled readers: stories of everyday survival and occasional heroism set at the fringes of the known universe. Despite these series establishing in their worldbuilding the core of humanity’s (often prosperous) settlement in space, the heart of their stories take place on the outer edges, in which ordinary people, lacking the amenities and securities of their civilization’s core, must scrabble for survival. Consider The Expanse, in which Earth and Mars are warring superpowers but the dramatic thrust of the story occurs in Belter space, on a distant station, and aboard an unassuming ship called the Canterbury.

Hundreds of lightyears from the Legion’s Core, retired battleship Argus sits at the Divide, its loyal and unceasing position. For five years, former war hero Adequin Rake has overseen a crew with rather spotty service records, from soldiers who washed out of Legion command to petty criminals whose unusual skills are utilized in this unorthodox setting. Despite the ersatz military rankings keeping them in line, they resemble less The Expanse’s Martian Marines and have more in common with the scrappy Belters: self-sufficient and resourceful because more often than not they don’t get their requested upgrades from the Core; so far from the powers that be as to be nearly forgotten; and—most vitally—changed by their proximity to the time dilation that ripples along the Divide.

So, what makes these fringe space stories so compelling?

For one, it’s the allure of the frontier tale: adventures set at the known limits of the world, with protagonists who seek to engage the unknown for the potential of incredible discovery. The quintessential frontier in Western literature is the American West: romanticized as a wide-open land of opportunity for the settlers self-sufficient enough to explore it, and justified by the notion of manifest destiny. However, these themes have become so pervasive that the metaphorical frontier can easily be applied to science fiction and fantasy.

To wit: the Argus has its own chain of command that allows each new recruit, regardless of their background before stepping aboard, to work their way up through the system from entry-level oculus to highly-trusted optio. That system also makes room for Savants, hyper-intelligent human/Viator hybrids that embody the best of the enigmatic other species and provide much-needed insight into an alien culture. That said, the crew’s onboarding process is less of an idealistic oath and more a bunch of Legion legalese, plus a set of Viator-inspired Imprint tattoos to keep them humble: If anyone gets out of line, all Rake has to do is press a button, and they’re swiftly disciplined on a skin-deep level. However, the system does not explain why Rake, a hero of the last human/Viator war years prior, traded in her status as a Titan to command such a ragtag crew—nor why royal misfit and general shit-stirrer Cavalon Mercer shows up as her most unorthodox recruit yet.

Yet for all that the frontier setting presents a blank slate, it also challenges its protagonists to match the environment in its spareness. “In the emptiness of the frontier, we find characters reduced to their most basic selves,” Only Killers and Thieves author Paul Howarth writes for The Guardian, “the comforts and trappings of the modern world stripped away to leave them with startlingly elemental choices: death or survival; morality or corruption; love or hate.”

The military structure aboard the Argus actively supports such black-and-white thinking: loyalty or mutiny; honor or treason; survival or death. It also traps Rake and her crew in a toxic environment, as Dewes explains in a recent interview with The Mary Sue: “Though the Sentinels’ mistreatment is something that’s been simmering in the back of Adequin’s mind for years, her stagnancy at this far-flung post has stifled any potential progress in realizing it. She can’t see past the walls of her ship and across the 100 million light-year expanse back to reality and civilization, so she has no perspective through which to see how bad it is.”

Cavalon’s arrival explodes those binaries, as he provides some vital context for just how corrupt the Core has become—not to mention embodying another potential aspect of this subgenre’s appeal: the desire to engage with the problematic truths of manifest destiny, especially as it has translated to space exploration stories. The romanticism of the frontier myth often occludes the ugly truths of such expansionist storytelling, namely the theft and resettlement of lands already occupied by Native Americans, and the brutal genocide of these First Nations peoples. While it isn’t the central conflict, The Last Watch does contrast humanity’s antagonistic relationship with the Viators with the cultural exchange—technology, hybrids, and clones—that nevertheless occurs between these supposedly disparate civilizations. At the edge of space, there is no room for entitlement or ego.

And perhaps that’s the purest appeal of edge-of-space stories: the notion of one person facing down the infinite.

Martin was inspired to create ASOIAF’s Wall, and the Night’s Watch upon it, by visiting Hadrian’s Wall in the 1980s. Standing atop the historical site, he told John Hodgman in a 2011 interview, he tried to put himself in the mindset of a first-century Roman soldier staring out beyond the wall: “at the end of the known world staring at these distant hills and wondering what lived there and what might come out of it.” It’s easy to see how that inspired the core of the Night’s Watch oath, the sacrifice of individuality that each man makes on Westeros’ Wall: I am the watcher on the walls. I am the fire that burns against the cold, the light that brings the dawn, the horn that wakes the sleepers, the shield that guards the realms of men.

It’s a role that every watcher shares, yet there is a vast divide between the quotidian duty of serving yet another uneventful shift and the portentous moment of being the first set of eyes to behold something or someone otherworldly. In a blink, a man goes from cog in the machine to a vital piece of history.

The Last Watch subverts this thinking in two key ways. Instead of encroaching White Walkers, the Sentinels are meant to hold the Divide against the inhuman Viators, despite the fact that their advanced enemies haven’t posed a threat for centuries, excepting the recent decade-long Resurgence War that (as the war epics go) wiped out their remaining numbers. In the absence of returning Viators, the Sentinels stationed aboard the Argus instead grapple with the unique conundrum of confronting themselves. That is, ripples in time dilation from riding along the Divide that project their döppelgangers from a few moments in the future. These glimpses are usually inconsequential glitches that create self-fulfilling prophecies, but as the ripples become more frequent, they hint at branching paths, and signal one indisputable change in the universe as they know it: the Divide is collapsing.

What these edge-of-civilization stories share with frontier adventures is the escapist feeling that there is still world left to be discovered, that humanity has not mapped out its limits. Dewes clearly marks that limit, and then turns it on its watchers, with the otherworldly chasing them back to civilization. Only when the universe begins collapsing can Titans and princes be truly stripped down to their base selves: survivors… or simply ceasing to exist.

The Last Watch is available April 20 from Tor Books, and is available for pre-order now. Check out the full synopsis below…

The Expanse meets Game of Thrones in J. S. Dewes’s fast-paced, sci-fi adventure The Last Watch, where a handful of soldiers stand between humanity and annihilation.

It’s the edge of the universe.

Now it’s collapsing—and taking everyone and everything with it.

The only ones who can stop it are the Sentinels—the recruits, exiles, and court-martialed dregs of the military.

At the Divide, Adequin Rake commands the Argus. She has no resources, no comms—nothing, except for the soldiers that no one wanted. Her ace in the hole could be Cavalon Mercer—genius, asshole, and exiled prince who nuked his grandfather’s genetic facility for “reasons.”