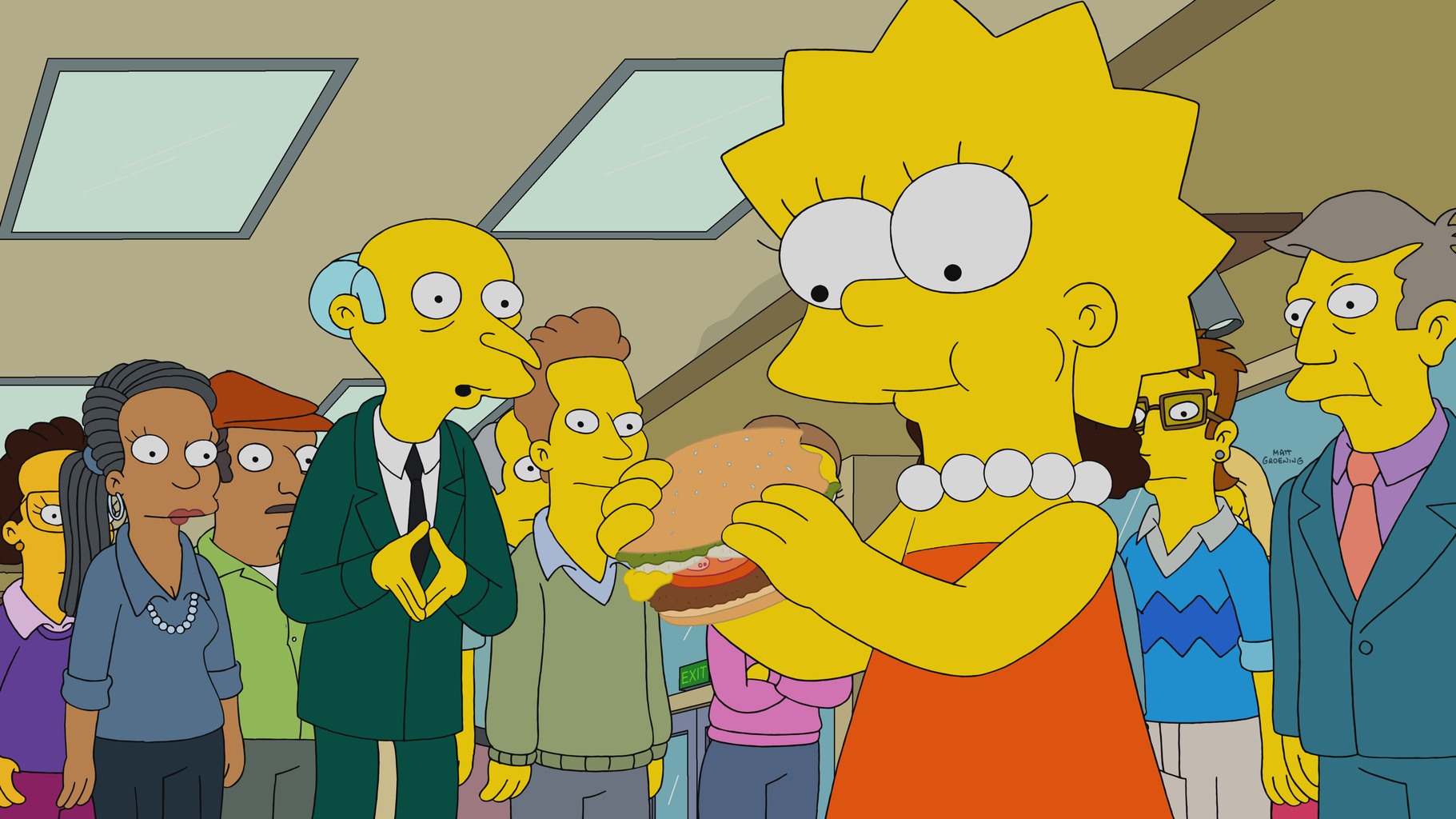 The Simpsons Season 32 episode 17 ” Burger Kings,” continues to charbroil Springfield mythology into tasty nuggets of classic comedy. With so much grease built up over the years, the cooks are unafraid to refry old dishes as new cuisine. This season has seen quite a few instances where old storylines are transformed into surprisingly fresh installments.

In spite of all outward evidence, and the best testing indicates, Mr. Burns never gets old. Yes, he has made “The Top 100 Most Evil People Over 100” list more times than he cares to admit. But not in the comic sense. We’ve seen him do good many times, only to revert to the evil capitalistic monster which lies at his black, barely beating heart. Over the years, he’s rebuilt himself by plundering all ocean life, protected the town’s children from an anti-child group in order to keep ensure their supple young organs will be available when he needs them, and stole the winning glory from a championship bowling team.

Unlike Dick Cheney, Burns won’t live forever. So, when he turns a mouth-watering near-death experience into an animal-cruelty-free shot at redemption, long-time audiences are primed to see how it’s going to turn sour. The Simpsons consistently pushes the inner logic of each character to their most hilarious limits. Burns is an ancient being, who is also tremendously wealthy. This foreknowledge makes the idea he has all of the wrinkles from his one breakfast raison ironed out palatable. Wearing a live bat for a night eye patch works because he’s just evil.

Burns’ final request, as he lay on his deathbed, to have Smithers fire someone, preferably an employee who just bought a house, is perfectly reasonable. When Burns gets his epiphany about doing good, he says he knows how Edison felt when he invented the electric chair. His reference to a beloved airman is Rudolph Hess. We buy it as easily as we believe he lived past 100 without ever eating a hamburger. And this, we believe because we don’t doubt that Burns believes hamburgers are made of people from Hamburg.

Burns’ twisted line reading of “People don’t like me. They really don’t like me” is a nod to Sally Field’s memorable second Oscar acceptance speech. Burns is on the same level of public transformation, but he’s no flying nun. Though he can take some comfort in knowing there is a little extra radiation in every drop of water on the planet because of him. Burns does have a point when he disagrees with Smithers on how the townspeople hate him because he’s sic’d the hounds on each of them by pointing out everyone loves dogs. The writers twist his logic perfectly.

It isn’t even surprising how Burns, who made his fortune at a nuclear plant, only realizes what fission is during this episode. We should have some sympathy for Burns. We learn he’s always craved praise because it was something he never had as a child. Monty’s father died the same day he found out his mother doesn’t like fake art, like a crayon drawing he made of her hugging him. But the newspaper headline begins with “Finally some good news” when it announces Burns is near death.

Music has been very important this season, filling the gaps in almost every installment. This episode is bookended by a lounge singer, who also does double-time as a Greek Chorus, improvising the verses to match the inner conflict in both Homer and Burns. Homer learns more from dreams than can ever be taught in books. In the opening Burns learns people think of him as a fat cat no one really likes, and the singer serenades him with wishes he never fall asleep. One song teaches Homer he sold out all his values.

Homer the perfect spokesperson as a stand-in for the common slob. Not only does he have it on his business card, but the card itself is stolen from Ned’s store with the name and number of his Leftorium crossed out. Lisa’s expertise in meat bypass products is as impressive as it should be. She’s been vegetarian since meeting Paul and Linda McCartney, and she’s intelligent enough to know her phony baloney from her ghost beef. It is a truly rousing moment when Burns wins the Simpson family over with a tasty meatless burger. The artistic rendition of Lisa’s tastebuds is inspired.

While it’s not explicitly stated, it looks like the Ex-cellent Burger stock movement brings out the compulsive gambler in Marge. It begins with a comment on the efficiency of Alexa voice commands. After Marge is misinterpreted into buying a thousand shares, Alexa tries to pawn herself off as Siri, but Marge is already hooked. The shareholders subplot, with the E-Trading and the “More money for Marge” stock ticker tongue, is as scary as it is funny because it is animated in Lisa’s childlike point of view.

The Burger Wars segment is ingenious, and benefits from the subtle seasoning. The medics arrive on the battlefield as Hamburger Helpers, and the mushroom clouds make for perfect burger toppings. One of the great mysteries of Springfield is how long “The Krusty the Clown” show has been on the air, when Krusty was made for cancel culture. When Burger King did an inclusionary ad promotion, Krustyburger rolled out the “Burger Queer.” The environmentally, and apparently humane food product Burns is selling inspires Krusty to introduce the LGBTQBLT. “My hero is a loser,” Bart notes sadly. Ultimately Krusty wins by doing exactly what he’s always done, nothing. He’s just waiting for someone to round up the donkeys before he gets back in the burger business.

The blatant social subversion of townspeople, including Fat Tony, holding up signs like “Blessed are the rich” and “We’ve got no beef with Monty” is brilliant subtle satire. The commentary continues as Burns finally gets to join the very exclusive “Beloved Billionaires Club.” It only has two members, Warren Buffett and Bill Gates. Mark Zuckerberg gets left out in the shade. Not only is he not allowed into the club, The Simpsons takes on Facebook’s privacy issues in a scathingly funny way.

The episode is loaded with quick references to quickly disposable culture. In one scene, Homer is reading the book “Harry Potter and the Apologizing Author.” It looks like the Stranger Things kids get eaten by the alien they’re apparently trying to save. In the Burns’ food rendering plant, one of the workers kills the vegetation with the same implement of death used in No Country for Old Men (2007).

“Burger King” is also supersized with the quick passing tone comedy bits which make for classic Simpsons episodes. It is overloaded with comic shorts. We say goodbye to the “Sad News Reporter” as he streams away with the burst dam water so Kent Brockman can present sponsored news. As the French chef is running from the hounds he yells “cordon bleu.” During one fantasia, Homer sees himself as the daddy of a fly family who “has put all his kids through garbage.” Burns shoves the Krustyburger bag into Homer’s mouth to shut him up and take his burger.

The Simpsons even puts a spin on the comedy law of threes. When Mr. Smithers is worried that Burns has doubled his weight by eating hamburgers, we see Burns top the scale at 42 pounds. This is funny, and works as a punch line because of Burn’s known frailty, but when Smithers says “tripled,” it extends the joke, and the surrealism. It almost forces the audience to do math. Lisa’s climactic pursuit of Burns is classic series traditionalism. The slow-moving old man can’t get away from her on foot, and she beats him to his mansion when he tries to escape her in his ancient car. She even has enough time left over to tame his hounds.

Because of the NDA, Homer can only speak in pre-approved corporate phrases like “yes, ve gan,” “I guaran tree it,” and “abso-lettuce.” He’s only learned one lesson in his life, and that is not to bite the hand that feeds you, even if there’s delicious marrow inside. Homer’s generation did what it did, and he imparts timeless wisdom. Lisa’s future will have its own problems to face, like inventing new bees and learning to live peacefully with fire tornadoes. But she reasons, like the promotions promised, “The fate of the world is in your mouth.”

When Lisa wants to know whether she should tell Burns his company is only using endangered plants, Bart says “he already knows. He’s evil.” Lisa believes people do change for the better even though there’s no evidence to back it up. She wants Burns’ life of evil to be completely forgotten with one good deed. She even believes he will do the right thing when he learns the Amazon is the lungs the planet.

Of course, Monty can’t keep it up. It’s what we expect, but The Simpsons still finds a way to twist it further. Once you’re known for doing something good you have to continue doing good things. “That’s why Jesus retired at 33,” Burns notes in an amazing realization. He’s no longer crushed by morality. Evil always wins, and he’s even planning on opening a school for the blind so he can convince them aliens have landed.

“Burger Kings” is the leanest fast food The Simpsons have served up in an already-satisfying season. With only one fat joke for texture, it is crammed with gags, jokes, sarcasm, and funny lines within funny lines. It crackles with cynicism and dashes dreams of little girls in mustaches asking hopeful questions. Even the opening couch gag offers an abstract appetizer to the story. The Simpson family are rendered as pre-French-fried potatoes. It’s only garnish, but it completes the meal.