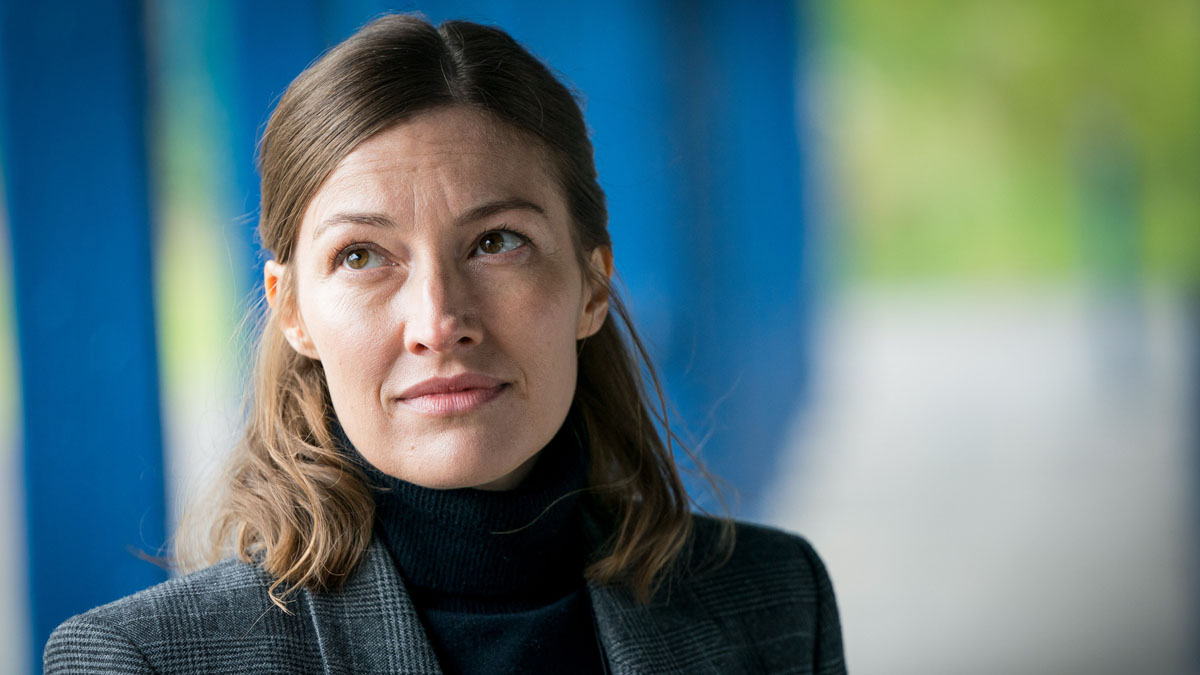 Nothing is standalone in this Line of Duty series six; everything is linked back to what’s gone before. Ryan Pilkington, Terry Boyle, Steph Corbett, Ian Buckells, Jimmy Lakewell, Blackthorn Prison, Lee Banks, even Jackie Laverty… all of them ‘previously on’ characters who’ve made a reappearance and dragged the past back with them.

It should come as no surprise then, that the series six guest lead played by Kelly Macdonald also has a significant link to the past. The end of episode four revealed that Acting Det Supt Jo Davidson is the blood relative of a key character already known to AC-12. The question is: who? When Steve and Chloe present the DNA evidence to Hastings, Steve seems to say “He’s identified over the page”, suggesting a male relative, though it’s impossible to be sure.

In episode one, when Farida complained that Jo was ashamed of their relationship because she’d never been introduced her Jo’s family, Jo replied “I don’t have a family.” Later, a frustrated Jo threw a glass of wine at a photograph that appeared to show a younger her with her mother. That set fans pondering a possible link between Jo’s estranged family and the mysterious hold the OCG had over her. Had Jo’s mother been kidnapped? Was Jo being blackmailed about something the OCG had over a family member? Were her corrupt actions driven by family loyalty?

When AC-12 expanded the forensic search of Farida Jatri’s home, they were hoping to find evidence of Davidson’s DNA to support the theory that Farida was telling the truth about them having lived together and Davidson having framed her by planting the OCG-linked burner phones. They found that alright, along with a surprise extra. When the DNA deposits discovered at Jatri’s were run through the system of police databases, analysis detected that Davidson shares DNA with a mystery nominal, i.e. she’s the blood relative of somebody with a criminal record, known to AC-12. We don’t know who, but we know that the revelation was enough to elicit a “Mother of God” from Ted Hastings.

Let’s get to work then: who are the potential candidates for Jo’s mystery nominal relative?

There’s been a fan theory linking Jo and Tommy Hunter since the very beginning of series six, on account of their shared Glasgow backgrounds. Many suspect that Jo is secretly Tommy’s daughter, but their relative dates of birth make that questionable. Tommy was born in 1965 and Jo was born in 1979, putting only 14 years between them. It’s possible, of course, that they were siblings. Jo’s next-of-kin is listed on her police record as Samantha Davidson, presumably the mother in episode one’s framed photograph (see above).

If you don’t remember Tommy, he was the former leader of the OCG who blackmailed Tony Gates in series one, and was revealed to have recruited DI Dot Cottan as a teenager and planted him as a corrupt officer on the force. Tommy was a paedophile who abused young boys in an OCG-run child sexual abuse ring in Sands View children’s home. After Tony Gates recorded a confession from Tommy before killing himself, Tommy was arrested and given immunity in exchange for providing information. In witness protection as “Alex Campbell”, the OCG made two attempts on Tommy’s life in series two, the second one successful.

All of which leaves the question: with Tommy dead by the OCG’s hands, what could they want with a relative of his?

This is another pre-existing fan theory based on that framed photograph of Jo’s mother. Some fans think that the woman in Jo’s picture is Anne-Marie McGillis, the mother of series five UCO-turned-rogue-bent-copper-hunter John Corbett, which would make Jo his sister. When Anne-Marie was killed by the IRA in 1989 for passing information to the RUC, John was sent to Liverpool and raised by his aunt and uncle. The theory goes that Jo would have been sent to other relatives in Glasgow, hence the ‘siblings’ having such different accents.

Put simply, it doesn’t really check out. For a start, Ted Hastings was close friends with Anne-Marie McGillis, and knew all about her wee lad John, but never mentioned that she had a daughter. Secondly, Jo Davidson’s date of birth is listed as 22/4/79 and John Corbett’s as 3/6/1979 – the same year. Thirdly, if you really look at those two photographs, despite some similarities, it doesn’t seem to be the same woman, though we’d put money on the fact that the new photo was designed to have a resemblance.

Like John Corbett, series three guest lead Danny Waldron’s mother died when he was young, so he was forced to move around the country. Danny left the city to move up north with his father and stepmother, but when that didn’t work out, he was placed back locally, in the Sands View children’s home. That’s where he and the other boys were routinely sexually abused by an OCG-paedophile ring including police officers and politicians, prompting Danny’s revenge list murders. There’s no mention of Waldron having had a sister, but there is a link between him and Davidson. Danny Waldron’s home address in series three was 5 Croxford Street. When Chloe is taking the team through the surveillance on Ryan Pilkington (around the 29 minute mark), it’s mentioned that Jo Davidson’s home address is also on Croxford Street. Coincidence? Red herring?

Previous key characters ACC Derek Hilton and DCC Mike Dryden were, like Jo, also from Scotland, which could suggest a link to Jo Davidson. Hilton was a bent copper who apparently committed suicide at the end of series four (but was much more likely killed by the OCG) after he conspired with Jimmy Lakewell to frame Michael Farmer for murder. Dryden left the force at the end of series two after being convicted of perverting the course of justice when he lied about getting a speeding ticket in order to have an alibi for engaging in a sex act with teenager Carly Kirk, who was being exploited by Tommy Hunter. Unlike everybody else on this list, Dryden is still alive.

Who else could it be? DI Matthew Cottain? If it isn’t a man, how about DI Lindsay Denton? DI Roz Huntley? Jackie Laverty? Hit us with your best theories below.

Line of Duty continues next Sunday the 18th of April at 9pm on BBC One.

Superman & Lois Season 2 Premiere: The Secrets of the Ending and What’s Next
A Discovery of Witches Season 3 Episode 2 Review: the Blood Rage Killer Revealed
Why The Last Duel Is Not an Oscars Contender
Legacies Season 1 Episodes 5 Review & After Show
Why Marvel’s Eternals Is Much Better the Second Time Around