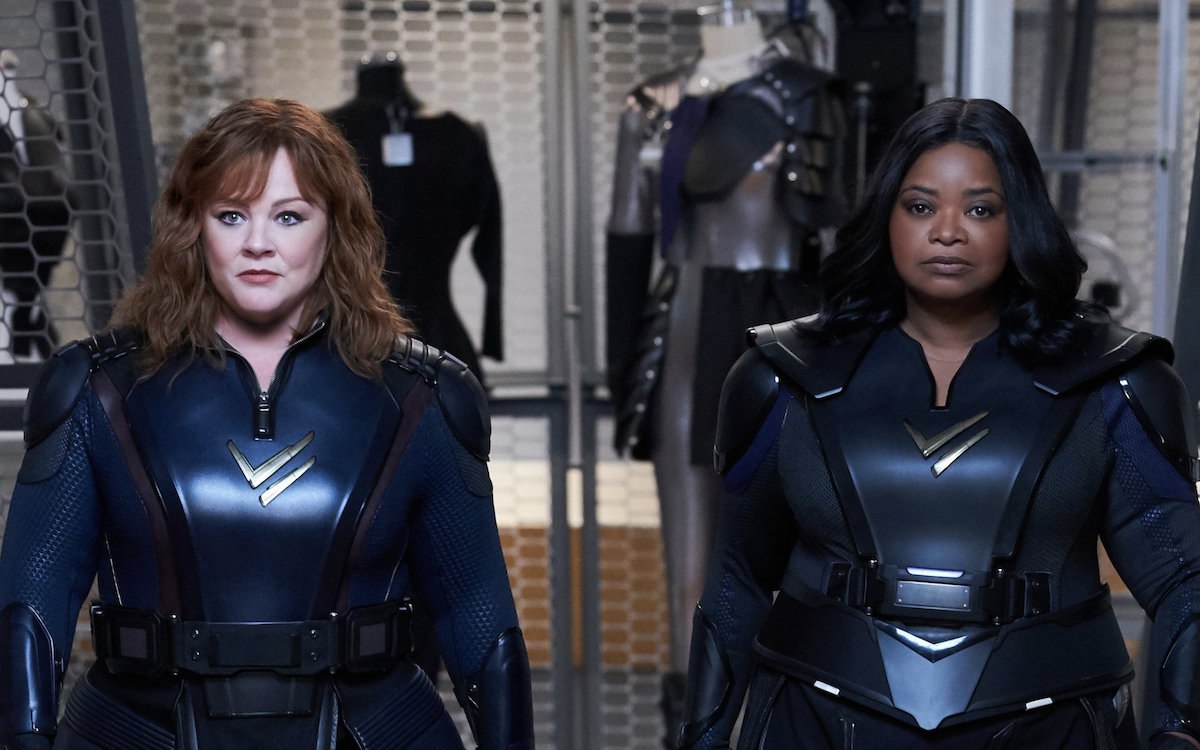 Netflix and Ben Falcone’s new movie, Thunder Force, is a comedy obsessed with superpowers. Octavia Spencer wants them, Melissa McCarthy stumbles into them, and a supremely bored looking Bobby Cannavale flaunts them. Everyone gets a power. Yet Thunder Force’s real gift isn’t those CGI tricks; it’s that like a humor-vampire, it can drain all the spark, charm, and wit from its talented cast, leaving behind the soulless carcass we have before us.

Greenlit by Netflix before the pandemic, Thunder Force is the exact kind of half-hearted laugher (read: with no actual laughs) that’s become Adam Sandler’s bread and butter on the streamer. You know, the type where good enough is never particularly good, and the most pressing question from the crew might be “when’s lunch?” Of course the greater shame in this is that a comedian as talented as McCarthy—who has actual Oscar winners like Spencer and Melissa Leo to play against here—is not over the hill. But she might get there if she continues to star in Falcone’s movies.

With a script by Falcone that stinks of a first draft left undone, Thunder Force follows two pals named Lydia (McCarthy) and Emily (Spencer). We meet the two as children in the early ‘90s for a series of perfunctory vignettes which highlight a falling out between the rocker and the studious nerd (you can guess which is which). Now in 2021, and at their (27-year?) high school reunion, the pair is totally estranged. Lydia is a blue collar worker, and Emily is the owner of a major tech company.

Even so, Emily never lost sight of her passion: to develop technology that will turn normal people into superpowers. Oh yeah, presented almost as an afterthought, it’s revealed early on that they live in a world where only devious people develop mutant superpowers, and they’re called “miscreants.” Miscreants killed Emily’s parents. So she wants to take the fight to them by injecting herself with drugs that will make her both invisible and super strong. Unfortunately for Emily, old buddy Lydia accidentally stumbles into her laboratory and gets the super strength formula (which there is inexplicably only one dose of). Now they’ll have to share the powers and take the fight to a litany of supervillains played by cameoing paycheck-seekers.

A comedy about women of a certain age, and of all body types, demanding the spotlight from the 20-somethings who star in Hollywood’s favorite genre is an admirable thing. It could even be applauded in a comedy that is barely competent. But there is nothing competent about Thunder Force. The film is Falcone’s fifth movie as director, and every one before this was mediocre. However, there were at least genuine attempts at cleverness in Superintelligence or pathos in Tammy.

By comparison, Thunder Force reeks of resignation. A cynic might even assume there was a calculation made that if the streaming service’s algorithm guarantees some audience will watch this dreck, why bother caring if any of the “gags” actually work? There is an actual sequence in this movie where McCarthy stands before Spencer and Leo—with seven Academy Award nominations between the three actresses—and they just watch slack-jawed as McCarthy does a deeply unfunny Steve Urkel impression that would’ve been dated 20 years ago. And it goes on for minutes.

Spencer is also checked out but is at least able to provide some vague maternal warmth to her scenes, walking away with her dignity intact. But the only person really engaged may be Taylor Mosby as Emily’s daughter, Tracy, a young woman confident enough in her intelligence to have graduated from Stanford at the age of 15, but inexplicably still offended by the word “nerd” like it’s a 1980s comedy. Except, you know, not funny.

Among the villains, who include Cannavale and Guardians of the Galaxy’s Pom Klementieff, Jason Bateman leaves the biggest impression as “The Crab.” He’s half-man and half-crab, having his arms turn into pinchers after a radioactive crab bit his testicles. No, really. He doesn’t succeed any more than McCarthy in wringing blood from this dull stone, but he and McCarthy at least have some semblance of comic chemistry. Imagine what they could do if they starred in a movie with a pulse?

Unfortunately, Thunder Force is its own kind of kryptonite: deadly, unoriginal, and best left in the leaden box it was found in.

Halloween Movies Ranked from Worst to Best
Succession Season 3: Kendall Roy is Back On Top, But for How Long?
Night Teeth: Sexy Vampires Feast on Crime Movie Thrills
Marvel Director Says Avengers: Infinity War Snap Was Captain America’s Fault
Link Tank: Where You Can Watch Dune (and All the Other Versions) This Week