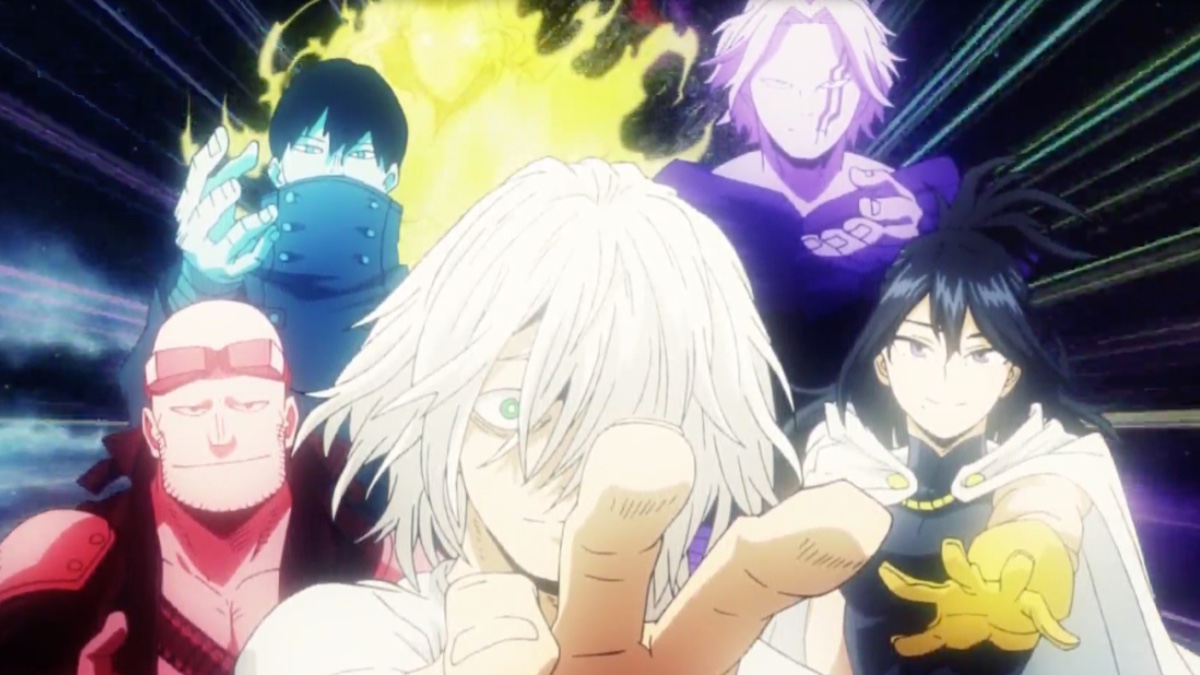 Each season of My Hero Academia is structured around a major story arc that ideally brings Izuku Midoriya and company closer to their goal of becoming professional heroes. The anime has a tendency to rotate between arcs that involve rampaging villains or the continued training and competitions between U.A. High’s heroes. “Clash! Class A vs. Class B!” officially kicks off My Hero Academia’s Joint Training Arc, which allows Midoriya and the rest of Class 1-A to intermingle with Class 1-B’s students.

Class 1-B has lurked in the background throughout the anime’s first four seasons and a select few characters like Tetsutetsu Tetsutetsu and Itsuka Kendo have already made an impression. A major perk to these episodes is that it’s genuinely exciting to see these familiar faces return. There are so many characters in this anime and it’s not uncommon for someone to vanish and never be seen again or simply get forgotten. It’s reinvigorating for these seemingly abandoned characters to now play major roles and it retroactively makes My Hero Academia’s narrative seem that much bigger since this reunion has been teased since season two.

It’s a big shift to suddenly have the series manage an additional two-dozen characters, but it gives My Hero Academia a restorative burst of energy that helps make this U.A. High material feel more exciting than tedious. This extension to My Hero Academia’s roster does succumb to some exposition that surrounds these characters, but it’s implemented naturally and doesn’t drag “Class A vs. Class B!” to a halt.

Part of the fun with these new characters is that there are definitely Class 1-B students that feel like bizarro versions of some of Class 1-A, but they’re not just a direct reflection of the heroes that we’ve grown to love. These similarities are meant to create tension or camaraderie between the two groups of heroes and there are also individuals like Manga Fukidashi and Kojiro Bondo that feel wholly distinct from anyone out of Class 1-A.

Another compelling wrinkle to all of this is that the focus on Class 1-B is meant to highlight a new group of allies, but the real standout in “Clash! Class A vs. Class B!” is Hitoshi Shinso, from Class 1-C. Hitoshi Shinso first appeared during the height of the Sports Festival when he faced off against Midoriya and it seems that he’s more determined than ever to break through the ranks of Classes 1-A and 1-B. Midoriya can’t wait to see how much Shinso’s powers have improved and this season is already positioning him to play a major role in what’s to come.

“You are not alone,” is a message that’s conveyed to Midoriya in relation to his One For All Quirk, but the sentiment is arguably even more applicable to Hitsho Shinso. He’s welcomed in with open arms and is ready to prove that he deserves this opportunity. He’s from Class 1-C, but his desire to fit in and be the very best is an ideology that’s held by every student at U.A. High.

Hitoshi Shinso seems primed to become an important hero, but the mystery around him should not be underestimated, especially when this season has already introduced concepts like traitors and double-agents. There are obvious similarities between Shinso and Shota Aizawa, right down to their attire, but he also bears a strange resemblance to Tomura Shigaraki. Shinso as Shigaraki’s illegitimate child would be a fascninating development and very on brand with the other ideas that this season is currently exploring.

It’s still very late in the game to introduce a surprise of this level and it’d likely cause more eyes to roll in dismissal than widen in excitement. It also seems highly implausible that U.A. High doesn’t have a competent vetting process to learn about Shinso’s history. Shinso likely isn’t evil, but he should still be a fascinating wild card through this season. His Brainwashing Quirk is the perfect ability for a villain and if he’s not aligned with Shigaraki then he might become his next target because the League of Villains could accomplish a lot with that Quirk.

Shinso’s casual demeanor makes him an early favorite between both classes and he’s turned into a rogue element in this competitive training exercise. Classes 1-A and 1-B are divided into teams of four students, but one group will have Shinso added to their party. This is one of the more interesting elements to the proceedings so far since Shinso can be viewed as a beneficial additional teammate, but also a liability since he’s a hero that no one has any experience working with before. “Class A vs. Class B!” lays out the logistics for this massive competition, but the action doesn’t begin until the episode’s final act when only a few minutes remain.

“Clash! Class A vs. Class B!” is light on combat, but the episode’s strength lies in how it prioritizes this unruly cast of characters. The battles barely begin this week, but the teams are divided in a way that shows off certain Class 1-A students that have increasingly receded into the background, like Momo, Fumikage, and Tsuyu. This arc also wisely separates most of 1-A’s most prominent heroes so that characters like Midoriya, Bakugo, and Iida are all on individual teams and not just grouped together. It’s exciting that this season won’t just spotlight Class 1-B’s heroes, but also some of the worthy underdogs in 1-A.

An unexpected element to this clash between classes is that many of these characters have lingering trauma from their previous showdown during the Sports Festival. It helps give that old material greater significance now that the fallout from it informs the current relationships in this joint training exercise. I also really love that there’s a callback to the super peaceful School Festival from the end of season four.

Class 1-B recontextualizes this sweet achievement for Class 1-A with the knowledge that Class 1-B’s absurdist pandering play technically won the School Festival. These characters all have legitimate powers and accomplishments to fall back on, but it’s ridiculous in the best way possible that this previous incident of fun and games becomes part of the catalyst that sets 1-A and 1-B at odds with each other when their mock fight begins.

Midoriya is eager to show off his skills and get another shot at Hitoshi Shinso, but he also can’t fully move on from the past. His prophetic One For All dream continues to haunt him and his discussion over the experience with All Might reintroduces the idea that One For All is a Quirk that’s actually sentient, to some extent. The war between “feelings” and “power” is addressed in response to Midoriya’s Quirk and the “impossible dream” that it teases. Midoriya has a decent understanding of this concept, but it’s still a difficult lesson for many heroes to comprehend.

Midoriya is forced to spin in circles with his thoughts, but the biggest insight that both he and All Might reach is in relation to the morbid “Quirk Singularity Doomsday Theory.” This is a principle wherein a parent passes down an even more powerful and destructive Quirk to their offspring and that this generational process can be just as much of a way to genetically manipulate and corner the superhero market as it is a way to organically create a family. Children naturally relate to the idea of a character’s legacy living on through their descendants, but the “Quirk Singularity Doomsday Theory” takes this same inspiring premise and turns it into an extensive form of brainwashing and manipulation.

Endeavor is in the process of turning his reputation around, but it’s crucial to remember that he’s been candid over how Shoto’s birth was largely just a cruel bargaining tool in his long-running strategy to surpass All Might as the Number One Hero. Both Endeavor and Shoto have grown beyond this point, but this disturbing Quirk theory gains more weight when there are already practical examples in My Hero Academia that can be looked at.

My Hero Academia’s fifth season seems most interested with this principle in relation to the original One For All and All For One, but the theme of “vestiges” is already entrenched in so many aspects of this new season. Hopefully this season will continue to unpack the fine line between creation and destruction and the fluid nature behind the duality of heroes and villains.

“Clash! Class A vs. Class B!” sets up promising developments, but the episode flies by and once the credits start to roll it feels like barely anything has happened. The very beginning of the first fight gets teased, but it’s easy to picture a more efficient version of this installment that actually concludes the first fight and sets up the second. “Class A vs Class B!” covers a lot of the same material from the previous episode when it comes to Deku’s dilemma and it even feels like a recap at times.

Midoriya’s concerns over his connection to One For All also don’t make for the smoothest of transitions into the training material. It’s possible that this episode could have more substance to it if the One For All saga was condensed to last week’s entry or at least heavily reduced here. It’s clearly not the end of that story, but its focus here just drains the rest of the episode’s momentum.

Of course, once it’s clear how long this Joint Training Arc is supposed to last it will be easier to assess the effectiveness of the pacing in these earlier episodes. At this point it’s unclear if season five will cram several battles into each episode or if the plan is to let these encounters properly breathe and devote at least one installment to each battle.

This is inherently part of the problem with training and tournament arcs, but My Hero Academia has gone through this type of material enough times now that they should have a good sense on how to plot out the first half of this season. “Clash! Class A vs. Class B!” is light, fun, and consistently entertaining, but there’s a feeling of emptiness when it’s over.

This episode is one big reunion between two groups of powerhouses, but these heroes can finally prove how much they’ve grown now that the pleasantries, peacocking, and introductions are over.

Michael Cassutt guests on ZNation Season 5 Episode 1 Review & After Show
Star Wars: The Book of Boba Fett Episode 3 Easter Eggs Explained
Meet Naomi, The New Superhero on The CW Block
Will HBO Max’s Degrassi Be In Continuity?
Who is Euphoria For?