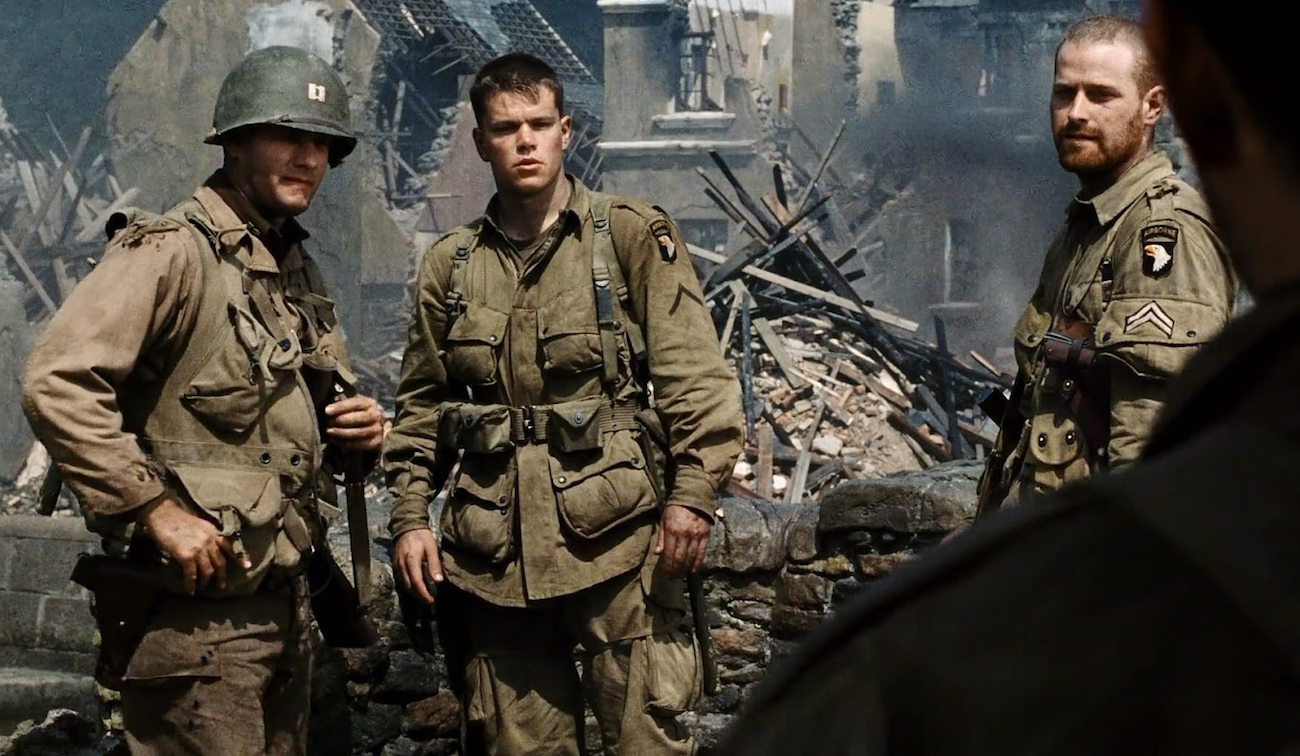 The events as they’re presented in Saving Private Ryan would never happen that way. This was my grandfather’s terse review of the Steven Spielberg movie back in 1998. He would know. After serving in the Pacific Theater throughout the war—being there from Pearl Harbor to Saipan, and then Okinawa—he carried a quiet lifelong interest in documentaries about the World War II American experience. And he had little time for Hollywood sentimentality.

“Eight guys for one man during D-Day? Never would’ve happened.”

Indeed, the idea of eight men being potentially squandered during the largest seaborne invasion in history is probably a flight of fancy by Spielberg and screenwriter Robert Rodat. Nevertheless, there is a poignant, mostly heartbreaking truth which informs Saving Private Ryan’s fiction. The context can be absurd at times, with Tom Hanks’ Capt. Miller leading a group of U.S. soldiers behind enemy lines to find one paratrooper, Pvt. Ryan (Matt Damon), after his three older brothers died in battles around Europe. However, the idea of the U.S. military wanting to prevent an entire family from being wiped out?

That cuts to the heart of War Department policy near the end of the Second World War. Here are a few of the true stories which inspired Saving Private Ryan’s Hollywood narrative.

Near the beginning of America’s entry into World War II, the family of Thomas and Alleta Sullivan from Waterloo, Iowa endured a tragedy so all-encompassing that it made national news. In November 1942, all five of their sons, George, Frank, Joe, Matt, and Al Sullivan, died after the sinking of the light cruiser USS Juneau in the Pacific. The youngest of them, Al, was aged 20, with oldest brother George being one month shy of his 28th birthday.

Before their deaths, the U.S. Navy already made it a policy to separate siblings upon enlistment, but it was never strictly enforced. And as George and Frank had served in the Navy before, they wanted to take the three younger brothers under their wing. All five volunteered to enlist in January 1942, shortly after the attack on Pearl Harbor. But they did so only upon the written stipulation that they serve on the same ship.

“We will make a team together that can’t be beat,” George Sullivan wrote to the military. “We had 5 buddies killed in Hawaii. Help us.” The Navy granted that wish, putting them on the Juneau, which soon headed to Guadalcanal where an Allied campaign began in August to wrest the island from the Empire of Japan.

The Juneau participated in a series of naval engagements before the ship was struck by a Japanese torpedo on Nov. 13 during a naval battle near the Solomon Islands. The cruiser was forced to withdraw, and later that day it traveled with other damaged U.S. warships toward the Allied rear-area base on Espiritu Santo. The Juneau was the lone vessel not to make it there. Torpedoed again, this time by Japanese submarine I-26, the cruiser’s ammunition magazines were struck by the blast and the ship exploded, sinking immediately.

It would be several days before there was any attempt to search for survivors.

At the time of the sinking, Capt. Gilbert C. Hoover of the USS Helena deemed it unlikely anyone survived the Juneau’s explosion and considered it reckless to look for survivors, thereby exposing more wounded ships to the unseen Japanese submarine. The other ships did not turn back. Instead the Helena signaled a nearby B-17 bomber to tell headquarters to send other aircraft out to search for survivors. However, the bomber could not break radio silence and did not report the sinking until the plane landed.

The bomber’s report went unnoticed for more than 48 hours under paperwork. By the time naval staff realized the clerical error, the more than 100 initial survivors of the Juneau’s sinking had long begun to see their numbers dwindle. This included several of the Sullivan brothers.

Of the 100 or so men who went into the water after the Juneau sank, only 10 were alive when a PBY spotted them eight days later. All five Sullivans were gone. According to those who did survive, Frank, Joe, and Matt died instantly on the second torpedo’s impact. Al drowned the next day. George, meanwhile, survived for four or five days before delirium set in, apparently caused by hypernatremia (a high concentration of sodium in the bloodstream). As a result, he jumped off the raft he was sharing and was never seen again. He was one of many who died from exposure to the sun, starvation, dehydration, and of course shark attacks.

Their parents Tom and Alleta did not know any of this for months. The U.S. Navy deemed it necessary to keep the Juneau’s loss classified, so as to not provide crucial information to the Japanese. But as days became weeks, and then months, parents of all the sailors grew fearful when communication with their children stopped.

After one anxious letter by Alleta was sent to the Bureau of Naval Personnel, inquiring about a rumor that all five Sullivan boys were dead, no less than President Franklin D. Roosevelt responded.

“As Commander-in-Chief of the Army and Navy, I want you to know that the entire nation shares in your sorrow,” Roosevelt wrote. “I offer you the condolences and gratitude of our country. We who remain to carry on the fight must maintain spirit, in knowledge that such sacrifice is not in vain.”

The day before the letter arrived on Jan. 13, 1943, the Navy informed the Sullivans their sons were dead. When Tom Sullivan asked the approaching chief petty officer which son had died, the Navy man responded, “I’m sorry. All five.”

The brothers left behind a younger sister named Genevieve, as well as Al’s widow and son (Al was the only brother married). It became an international story, with Roosevelt sending another letter, and Pope Pius XII sending a silver religious medal and rosary with a message of condolence to the Catholic family. Alleta was there when the Navy launched a new destroyer, USS The Sullivans, in 1943. She and her husband also became regular speakers for the war effort in the following years.

As a result of the Sullivans’ sacrifice, plus another family’s suffering, the newly named Defense Department soon implemented the Sole Survivor Policy. But before that happened there were…

Alben and Gunda Borgstrom of Thatcher, Utah were already touched by tragedy before the Second World War. The parents of 10 children, seven boys and three girls, one of their sons had already died in 1921 from a ruptured appendix at the age of 10. When World War II began, five of the remaining six sons either volunteered or were drafted into the war: LeRoy Elmer, Clyde Eugene, twin brothers Rolon Day and Rulon Day, and Boyd Borgstrom.

Over the span of about five months, four of the brothers died all over the world. The oldest of them, LeRoy, was only 30 while twin brothers Rolon Day and Rulon Day were aged 19 when they died on different sides of the English Channel.

Clyde, 28, was the first to die in March 1944, struck by a falling tree while clearing land for a new airstrip on the Solomon Islands in Guadalcanal. His older brother LeRoy followed three months later when he was killed in action while fighting in Italy. Rolon Day died in August when the bomber he was on experienced engine failure and crashed in Yaxham, England. Rulon Day, meanwhile, was reported as missing in action after an attack on Brest, France, a port city in the Brittany region held by the Germans. He was later found gravely injured, and soon died from combat wounds on Aug. 25, 1944.

Even before a mortally wounded Rulon Day was discovered, his parents had already gathered the support of neighbors and Utah congressional leaders to petition the U.S. military to release their last surviving son, Boyd, from service. The petition was successful, and Boyd was transferred home to the U.S. and thereafter discharged from the Marines with a special order of the Commandant of the Marine Corps., Gen. Alexander Vandegrift. Further the Borgstroms’ youngest son Eldon, who was not yet old enough to serve in the military in 1944, was exempted from the draft and military service.

A funeral service was held when all four deceased brothers’ remains were returned to Utah in 1948. During the service, their parents were presented with three Bronze Star Medals, one Air Medal, and one Good Conduct Medal. The loss of the four Borgstrom Brothers, like the five Sullivans before them, triggered the official adoption of the Sole Survivor Policy.

Implemented in 1948, the Sole Survivor Policy is a Defense Department directive which describes a set of regulations to be observed by the U.S. military in all its branches. The policy is designed to protect the sole survivor of families from combat duty or the draft if the son or daughter in question has siblings who already died in combat.

However, the policy is entirely voluntary. Which means the designated “sole survivor” of a family in the military must apply to be sent home by commanding officers. Additionally, it only applies during peacetime, and not in times of war or national emergency as declared by the U.S. Congress. But since Congress hasn’t officially declared war since 1942, it’s pretty much been in place in perpetuity, although each branch of the military has its own special provisions for the regulations.

While it would not have been implemented during the events of Saving Private Ryan—in fact, several of the fallen Borgstrom brothers would still be alive during the events of the film—its creation would have already been on the minds of the top brass when something like the Pvt. Ryan situation occurred. However, even if the Sole Survivor Policy had been in place by ‘44, Damon’s James Ryan would still need to apply to return home (which he did not want to do in the film)…. and that paperwork probably would not have been processed during the middle of a massive invasion.

Still, it makes for a great movie.

New World: Gold Farming Tips For the Broken Economy
Charmed Season 1 Episode 9 Review & After Show
Why We Can’t Quit I Know What You Did Last Summer
Kill the Justice League: Evil Superman Could Be the Best Video Game Superman
How The Flash Movie Trailer Brings Back Michael Keaton’s Burtonverse