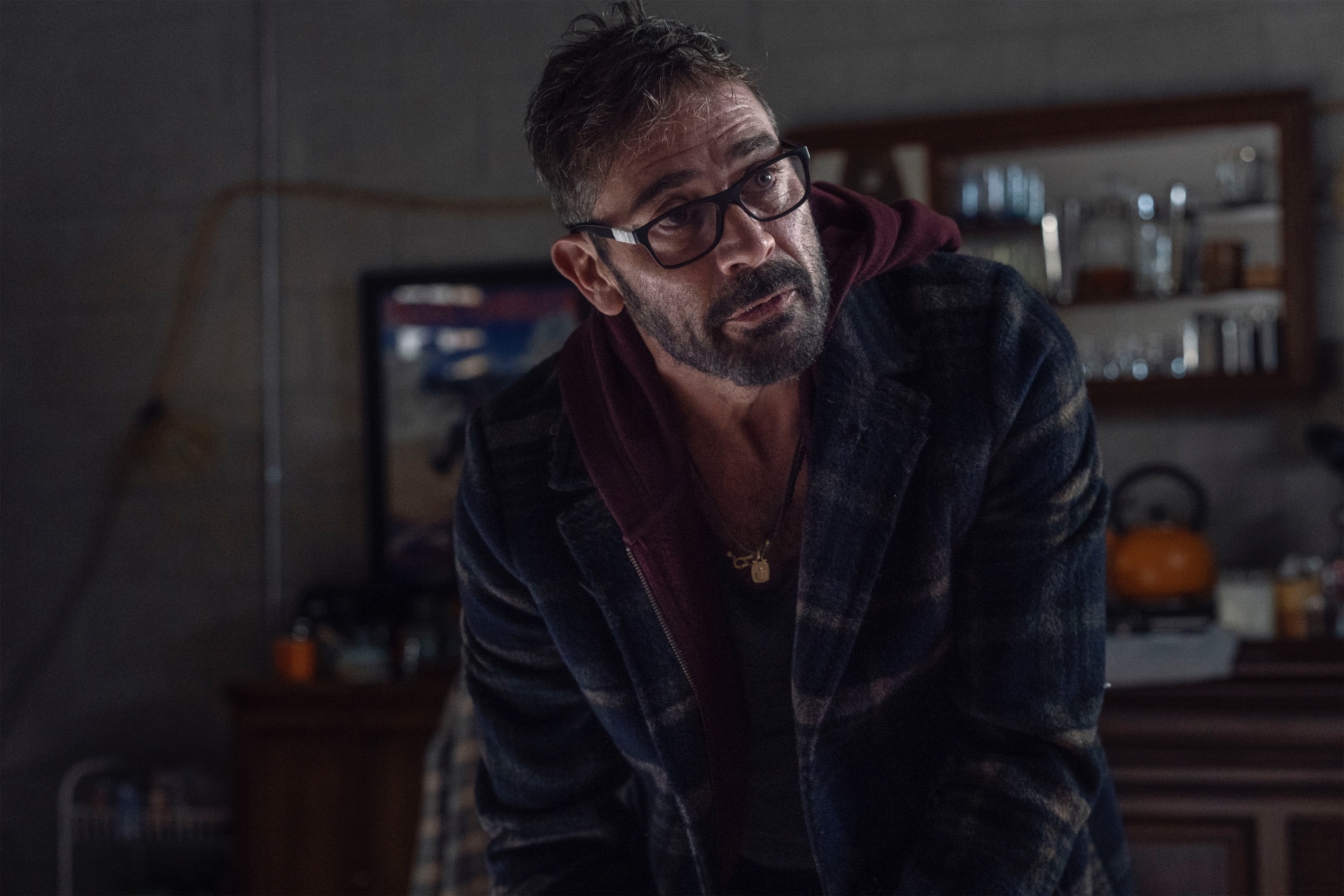 This article contains spoilers for The Walking Dead season 10 episode 22.

Negan (no last name given…or needed) is one of the most unexpectedly beloved characters on The Walking Dead. Loquacious, charismatic, and unfailingly vulgar, Negan practically jumps off the page of Robert Kirkman’s comic series, and makes a big impact through Jeffrey Dean Morgan’s performance of the AMC series.

Over 193 issues of Kirkman’s comic, it became clear that the writer was just as enthralled with the brutish villain as the fans were. It would have been easy to kill Negan off at the end of the extended All Out War arc. Rick even slashed the man’s throat! But Kirkman made sure the jerk lived to fight another day and he soon became an integral part of the Whisperer War before finally retiring to a life of quiet contemplation in the woods.

Prior to Negan gracefully exiting the pages of The Walking Dead, however, Kirkman and longtime illustrator Charlie Adlard presented his origin story in a miniseries called “Here’s Negan.” Told over 16 short chapters and published in its entirety in 2017, “Here’s Negan” tells the story of how a lowly gym teacher came to be a bat-wielding, leather jacketed badass in the post-apocalypse.

Not that readers needed a reason to love the antagonist more, but the miniseries added a new sympathetic layer to the character and revealed how he broke bad. Now, in the finale of its six extra season 10 episodes, The Walking Dead TV series will be doing the same thing.

The Walking Dead season 10 episode 22 “Here’s Negan” serves as a fitting conclusion to a super-sized year for the show, while also filling in some of the blanks on Negan’s story. Here is how it does so along with what it borrows and what it changes from its comic miniseries inspiration.

The characterization of Negan’s wife Lucille and her failing health going into the zombie apocalypse represents the biggest similarities between “Here’s Negan” on the page and on the screen. In fact, there’s really only one key difference between the comic and the TV adaptation. In the comic, Lucille dies right as the zombie apocalypse breaks out. In the show, Lucille makes it to at least seven months into the end of the world.

Aside from the time and setting difference, much of Negan and Lucille’s arc remains the same. The “Here’s Negan” comic reveals that Negan was every bit the charming asshole pre-zombies that he is now. The story opens with Negan, a gym teacher, mercilessly schooling three kids in a game of ping pong in his garage. Because he’s Negan, he can’t quite help but cuss them out upon his victory (just as he does while pwning some n00bs in a game of Gears of War in the episode). Lucille overhears Negan behaving inappropriately in front of the children and begins to tell him off. Unfortunately, shortly into her admonishment, she passes out.

The story then cuts to the hospital where Lucille’s diagnosis is revealed. Shortly thereafter Negan sleeps with the woman who he has been cheating on Lucille with (yes, even after hearing about her cancer). Thankfully, after that tryst, Negan finally breaks the affair off and returns to Lucille’s bed side where he apologizes and tells her he’s all in now. We get a fun little example of Lucille’s sense of humor (and maybe her current state of mind) when she tells him “What’s wrong with you? Why would you pick the sick one?”

Shortly thereafter, Negan is present with Lucille at the hospital when the world ends. Doctors rush into Lucille’s room to tell Negan to run as some seriously messed up stuff is underway outside and within the halls of the hospital. Negan refuses to leave Lucille’s side naturally, but she passes away suddenly and becomes Negan’s first introduction to the walking dead.

The TV series does an admirable job in picking out what works about the beginning of “Here’s Negan” while finding ways to improve everything else. Getting to see what Lucille is like after the fall is a great way for the audience to warm up to her. Even when suffering through another round of chemo, Lucille musters the energy to take down a walker when Negan can’t.

This change also allows for Negan to mourn her loss more acutely when the time comes. Having to put down a zombified Lucille long after he’s acclimated to the world’s deadly new rules has a greater emotional impact than having to do so right at the beginning.

The TV version of “Here’s Negan” begins to deviate from the comic quite a bit after the Lucille origin story is out of the way. The middle portion of the comic miniseries finds Negan doing what pretty much every other character has had to do: wandering out on the post-apocalyptic streets, looking for company, community, and safety.

While the TV Negan struggles to put down a single walker, the comic Negan is preternaturally gifted at both zombie-killing and survival. He encounters one group while promising he can hotwire a car (he cannot). Later on that night, Negan and the group face their first real test of the apocalypse when a horde of walkers attacks their campfire gathering. All of his new friends die, but Negan survives and loots the baseball bat that will one day become the new “Lucille” off of one of their corpses.

Negan surviving while his new partners die becomes something of a recurring theme. We see a montage of Negan making new acquaintance after new acquaintance, only for them to prove incapable of making it in this harsh new world. When his latest partner reveals she sustains a zombie bite on her neck, Negan reacts in pure rage.

“I’m sick of you people. You’re all fucking WEAK. ALL YOU EVER DO IS DIE.”

Negan wants to find someone strong, someone who can survive like him and who won’t break his heart by dying. He eventually finds just that in a group led by Dwight (hey, remember him?) and Sherry.

Negan’s origin story in the TV series, of course, differs a great deal. Since Lucille is still alive in the apocalypse, Negan’s inciting moment to get him on the road and moving is the need to secure more medicine for her.

What’s interesting about this alteration for the show is how it potentially changes Negan’s motivation for society-building. In the comic, Negan comes to view strength as its own virtue – because in the new world strength is the only way to avoid pain. But the people that Negan comes across in the episode are anything but strong.

Franklin and Laura (who fulfills Dwight and Sherry’s role as the “hey, I’ve seen that person before!” character) are unfailingly kind and compassionate. That only makes them an easy target for the Valaks Vipers MCs of the world. The comic version of Negan might be disgusted by Franklin and Laura’s charity and therefore weakness. In the show, however, it’s their selfless act that encourages him to take up the mantle of being the badass who can “save the world.”

Speaking of being a badass, both the comic and TV versions of “Here’s Negan” feature a moment in which the character self-actualizes into the Savior leader we come to know later on. In the comic that moment comes when Negan gets a chance to display one of his only truly decent qualities: his hatred for sexual violence.

Soon after Negan joins Dwight’s group, he becomes their de facto leader. He’s simply too strong and his survival instincts are too good to be ignored. The others start to follow him, not Dwight, because they seem to instinctively understand that he’s their best bet for survival. Eventually the burgeoning Saviors encounter another group and invite them in to join forces because strength can be found in numbers.

Unfortunately that group’s leader soon implies to Negan that the women with them are sex slaves. Negan acts quickly and instinctively, beating the man to death with his beloved bat. After the deed is done, Negan begins to ominously adorn the bat with barbed wire while telling the rest of the group that they’re free to stay. He articulates his new modus operandi in the verbose way that a newly-born supervillain can. It was Lucille who made Negan stronger and gave him the armor to survive when all the people around him couldn’t. Now with this new barbed wire Lucille, Negan will finally be able to protect those around him, shielding them from the evils to come.

It’s a typically overwrought Negan speech, blunted by the Glenn-murdering version of Negan we know is yet to come. But if you squint a bit, you can kind of see how Negan’s mission of protection could become one of subjugation and domination. Negan really thought he was saving the world, one swing of Lucille at a time, because he was the only one strong enough to do so. It wasn’t until he came up against the power of Rick Grimes’s egalitarian group that he realized he was mistaken.

Negan comes to a similar conclusion in this episode, he just takes a different route to getting there. After Lucille mercy kills herself and Negan is forced to put her zombified form down, he returns to confront the Valaks Vipers. Once the goons are dispatched outside, Negan can’t help but opt for theatrics once again. He puts the Viper leader on his knees for his very first “lineup,” though this time it’s a lineup of one.

He tells the Viper the story of how he got into a bar fight one night that jeopardized his gym teacher career. All he wanted to do was to listen to “You Are So Beautiful” with Lucille at a bar. But one particular loud mouth had other ideas. So Negan beat him up. Now that the world has ended it seems like only the loudmouths and douchebags are left. Truly decent, selfless people like Franklin and Laura at a premium. And when you find them among the zombies you must do whatever it takes to protect them. Who better to project the weak and the meek from the monsters than the ultimate monster – Negan, himself.

At that, my friends, is how you get a Negan.

The episodic “Here’s Negan” ends with a touching little coda where Negan lays his shattered bat to rest and finally, verbally says goodbye to the flesh and blood Lucille. His full eulogy is as follows.

“I’m sorry that I named a stupid baseball bat after you. I hope you found someone in the afterlife and you are screwing your brains out. Well, not really. But fair is fair. I miss you. I love the shit out of you. And I am gonna do your fighting for you.”

Here, The Walking Dead is borrowing directly from the comics once again, but not from “Here’s Negan.” Issue 162 of the comic series opens with Negan burying Lucille, which was destroyed in The Whisperer War. His parting words are nearly identical right down to “I’m sorry that I named a stupid baseball bat after you” and the colorful passage about brains being screwed out in heaven.
This is a particularly important passage for The Walking Dead season 10 to go out on. For while the comic version and Jeffrey Dean Morgan version of Negan have their differences, their stories start and end in the same place: Lucille.

The Best Scary Movies on Horror Channel for October
Star Trek Just Made This Deep-Cut TNG Character Into a Captain
The Walking Dead Season 11 Episode 8 Review: For Blood
Back 4 Blood: Every Cleaner Ranked
The Last of Us HBO Series Set Footage Reveals Best Look at Ellie, Joel, and Tess in Boston QZ