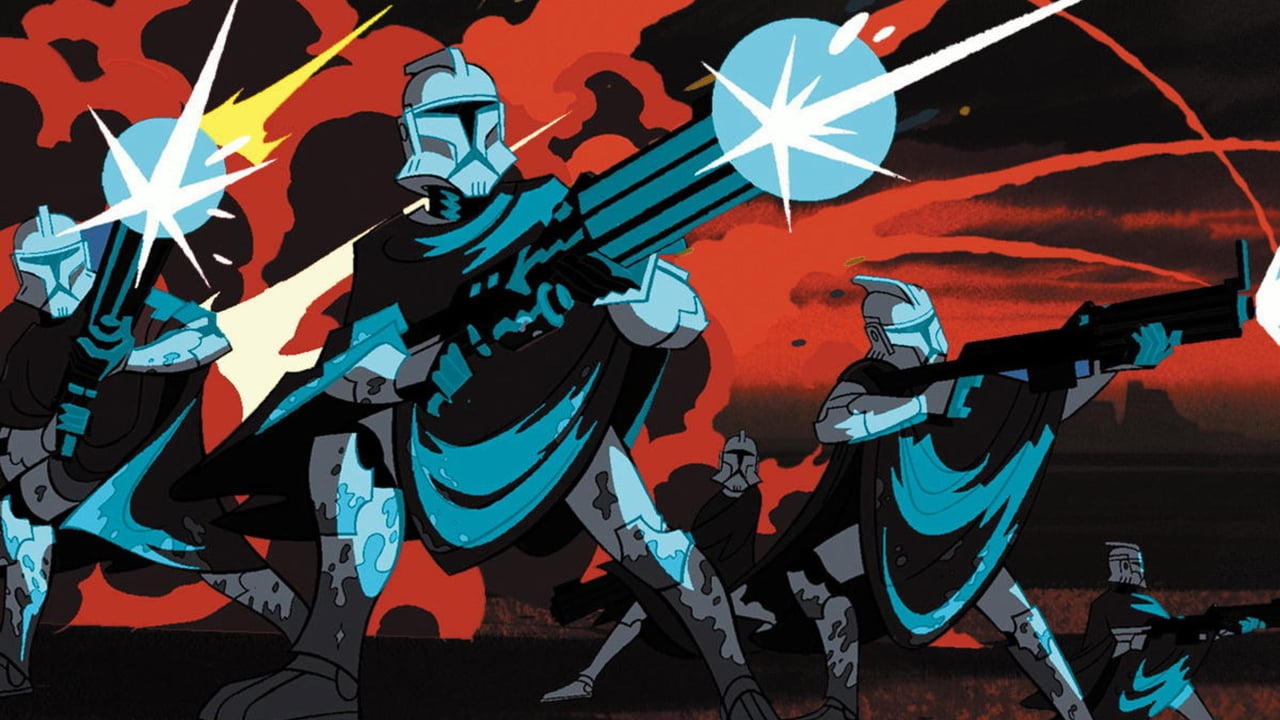 Party like it’s 2003! On April 2, Disney+ will begin streaming the Genndy Tartakovsky version of Clone Wars, which means, for certain generations of Star Wars fans, a slightly alternate version of the iconic storyline will be available to watch on the app for the first time. Along with Clone Wars, Disney+ is also dropping two of the made-for-TV Ewok movies, and the animated ‘80s TV series Ewoks. And while all of that Ewok action certainly makes us nostalgic, let’s get serious: the Tartakovsky Clone Wars is the real deal.

Besides being the first animated series set during the Clone Wars, the 2003 microseries is best known for introducing fan-favorite characters such as Asajj Ventress, General Grievous, and Durge. Most importantly, in the first few years following the end of the Prequel Trilogy, Tartakovsky’s series was the definitive story of what happened during the Clone Wars.

That’s until the arrival of The Clone Wars (differentiated by a “The” in the title). This second animated series ran from 2008 to 2020 and featured huge moments of its own: it introduced Anakin Skywalker’s Jedi padawan Ahsoka Tano, brought Darth Maul back from the dead, and fleshed out the history of the Mandalorians.

The 2003 microseries and 2008 series were both considered canon early on, but when Disney bought Lucasfilm in 2012 and retconned the Star Wars timeline, the studio erased the classic Legends continuity and established The Clone Wars as the true, canon version of events. That means the stories in Tartakovsky’s Clone Wars never happened in the current Disney canon.

But that may be about to change. Along with Clone Wars‘ arrival on Disney+, Disney has also announced the return of shape-shifting bounty hunter Durge to Star Wars canon. His appearance in the upcoming Marvel Comics crossover event War of the Bounty Hunters could pave the way for the return of other parts of Tartakovsky’s classic Clone Wars series. Here’s how all of this can work:

After Anakin gets Ahsoka as his new apprentice/partner, you’d then watch The Clone Wars seasons 1 through 6. Ahsoka leaves the Jedi Order in season 5, which would explain in your headcanon why she’s not in Tartakovsky’s series at all. After the events of season 6 of The Clone Wars, you could then insert Clone Wars season 3 into the timeline, since those 2005 episodes end directly before the events of Revenge of the Sith. (In Tartakovsky’s Clone Wars, we even saw Palpatine get kidnapped by General Grievous on Coruscant.)

So, to recap, before the belated season 7 of The Clone Wars in 2020, you could have just assumed the Clone Wars timeline looked something like this:

There’s just one problem: the events of Clone Wars “Chapter 25,” which were meant to lead right into Revenge, are directly contradicted by The Clone Wars season 7 episode “Old Friends, Not Forgotten.” In the Tartakovsky version, Obi-Wan and Anakin get the call to defend Coruscant after a dangerous mission on the planet Nelvaan, but in The Clone Wars, Anakin is with Ahsoka, planning to go to Mandalore, when he and Obi-Wan are diverted to save Palpatine. That means, if you’re particularly stringent about events lining up perfectly in your headcanon, at least some of Clone Wars couldn’t really exist in the same timeline as The Clone Wars.

Obviously, there are many other little inconsistencies between Clone Wars and The Clone Wars, but this one very specific plot point from the final season of The Clone Wars is the smoking blaster that kills any hope of the Tartakovksy series as a whole being canon. But that doesn’t mean all is lost…

Durge Is Back, So Does His Clone Wars Story Count?

Durge’s upcoming canon debut in June’s Doctor Aphra #11 opens the door for at least some of the events of Clone Wars to return to Star Wars canon.

In Clone Wars “Chapters 2-4,” Obi-Wan (partially clad in clone trooper armor for the first time) battles Separatists on the banking planet of Muunilinst. Obi-Wan’s biggest antagonist in this battle is Durge, a centuries-old bounty hunter, encased in a suit of armor, who has rowdy regenerative powers that make him kind of like the Star Wars version of Wolverine combined with Apocalypse.

Long story short, he’s very hard to kill and this leads to one of the best duels in Tartakovsky’s series. Best of all, since the fight takes places in season 1 of Clone Wars, it could still easily fit back into the canon timeline. Creators wouldn’t even really need to create a new backstory for the character. Since he’s centuries-old, even his Legends history with the ancient Mandalorians and Sith still works within Disney’s framework. You could really just sprinkle all of those details back into the timeline without much puzzle-solving.

What else could the Lucasfilm Story Group easily reincorporate into canon? Again, the entire microseries can’t be reincorporated because of that pesky Clone Wars Season 7 scene but what about that epic moment when Anakin is knighted and his braid is snipped off by Yoda’s lightsaber? That can be canon again, right? What about Asajj Ventress’s duel with Anakin in “Chapter 19?” That should totally count!

Okay, real talk. Durge returning to canon Marvel Comics, and Disney+ streaming Clone Wars, doesn’t suddenly mean more of the microseries is being retconned back into the timeline. Durge is back, sure, but it doesn’t mean Disney will bring any of his Legends storylines with him.

Just look at the way Rebels retconned Grand Admiral Thrawn. In that animated series, Thrawn is 100 percent the same character we remember from the ‘90s Timothy Zahn novels, but he’s in a totally different part of the timeline. The events of Rebels take place up to five years before the Original Trilogy, while the now non-canon, original Thrawn novels took place five years after the OT. That means Disney still has the breathing room to decide whether a new version of the events of the classic Zahn novels ever happened in the current timeline.

The same goes for Durge in the Marvel comics. War of the Bounty Hunters, which is set between The Empire Strikes Back and Return of the Jedi, is nowhere close to the time period of Clone Wars. Same character, totally different decade. Disney could just decide this is a new version of Durge with no connection to the Clone Wars at all.

Then again, because The Mandalorian name-checked Thrawn in season 2, it’s possible that a revised version of “The Thrawn Trilogy” could still happen in the post-Return of the Jedi (and pre-Force Awakens) timeline in which the Disney+ live-action series is set. This doesn’t mean this is going to happen, but like the headcanon Clone Wars/The Clone Wars timeline, you could easily make it all fit in your mind.

Durge is canon again. That much is certain. The first Clone Wars is streaming on Disney+. That’s happening, too. But will Durge admit to having been at the Battle of Muunilinst in Doctor Aphra #11? Even if he doesn’t, for many of us, it still happened. After all, some canon, especially where Durge is concerned, depends greatly on a certain point of view.