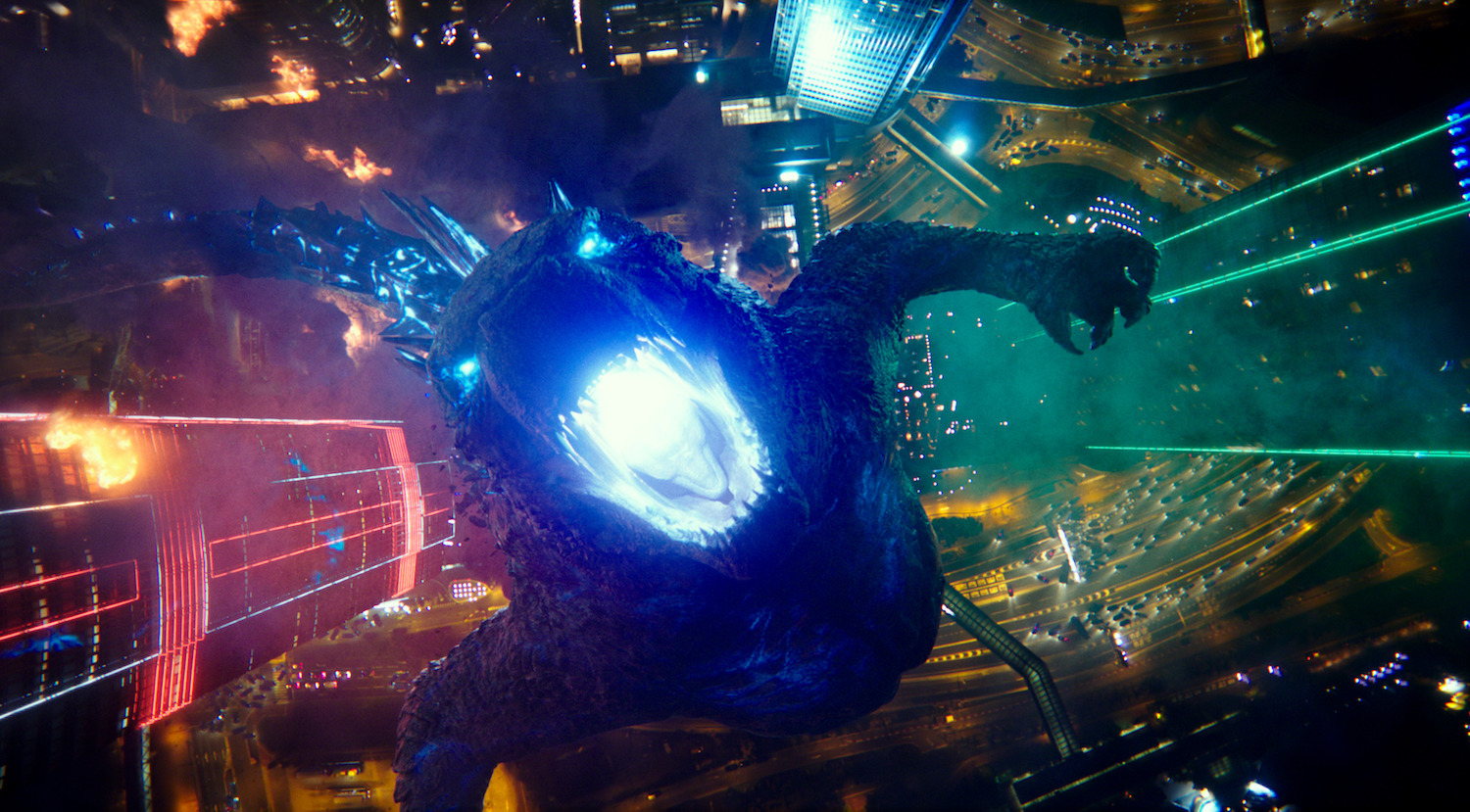 This article contains spoilers for GODZILLA VS. KONG. Read our spoiler-free review here.

As Godzilla vs. Kong enters its third act, multiple plotlines are coming to a head: an exploration team led by Dr. Nathan Lind (Alexander Skarsgard) and Dr. Ilene Andrews (Rebecca Hall) has followed Kong through a tunnel from Antarctica to the center of a Hollow Earth, the kingdom deep under the Earth’s surface from which Kong’s race and other Titans first originated.

A team of Apex Cybernetics personnel are also with them, and their goal is to discover a new power source in the Hollow Earth that’s strong enough to charge up Apex’s giant robot, dubbed Mechagodzilla. Once it has enough juice, it’ll be able to fight Godzilla and finish him off. This is of course the big twist of the finale, one that both explains why Godzilla went on a seemingly unprovoked rampage in Pensacola, Florida at the top of the movie, and which gives the big lizard and gorilla a common cause foe to defeat. It is also a twist that the MonsterVerse’s key recurring talent has been pursuing for quite some time.

“I had originally written Mechagodzilla into [the previous film, Godzilla: King of the Monsters],”says screenwriter Max Borenstein, who has worked on the scripts and/or stories for all four films in the MonsterVerse, beginning with 2014’s Godzilla. “It was very similar in the sense of being an opportunity for the human characters to have some agency against the scale of the monsters, which is one of the hardest parts of these stories.”

Although King of the Monsters director Michael Dougherty eventually decided not to deploy Mechagodzilla in that film, Borenstein continues, “I was really happy that we had brought it back in Godzilla vs. Kong, because it felt like one of the main challenges of Godzilla vs. Kong is neither Godzilla nor Kong is a villain. We’re rooting in different ways for each.”

Meanwhile the power source in Hollow Earth is discovered when Kong charges his massive battle axe with it, making it impervious to Godzilla’s atomic breath. Apex CEO Walter Simmons (Demián Bichir) orders the head of the team, his daughter Maya (Eiza Gonzalez) to obtain the power source’s signature, but she and the rest of her team are killed when Godzilla attacks Hollow Earth from the surface, unleashing a horde of creatures below.

Nonetheless, Apex obtains the power signature before Maya’s demise, and at their Hong Kong headquarters, Simmons tells scientist Ren Serizawa (Shun Oguri) to use the power source to charge up Mechagodzilla, which Ren controls telepathically through the neural networks inside of a severed Ghidorah skull.

An enraged Kong returns to the surface where he and Godzilla clash in a massive battle amidst the skyscrapers of Hong Kong. Even though Kong can deflect Godzilla’s breath with his axe, the monstrous reptile proves too much for the massive primate, who is beaten nearly to death.

At Apex, Ren fires up Mechagodzilla despite his worries about the strength of the power source. His concerns prove correct, although he doesn’t live to see it: Ren is electrocuted and Mechagodzilla goes berserk, now partially controlled by the neural networks of the Ghidorah head. Mechagodzilla bursts out of its lab–killing Simmons in the process–and into Hong Kong, where it takes up the fight against an already weary Godzilla.

At the same time, Lind and Andrews arrive and are able to revive Kong with the help of Jia (Kaylee Hottle), a young orphan who has a bond with Kong, and Jia persuades the ape to help Godzilla battle Mechagodzilla.

“It felt essential to have a third thing,” says Borenstein about having Godzilla and Kong team up against Mechagodzilla. “Round one goes to Godzilla, and round two goes to Kong. The question is in round three, rather than having one or the other win, how can we have the two of them develop a grudging respect for one another and go up against the third thing? Mechagodzilla felt like this perfect route into that.”

At first Mechagodzilla proves even too powerful for the combined force of the two former enemies, but thanks to Josh and Bernie briefly short-circuiting the robot’s control panel with a handy flask of liquor that Bernie always carries around, they buy just enough time for Godzilla and Kong to launch another assault. This time Godzilla fires up Kong’s axe with his breath, and the ape smashes Mechagodzilla to pieces with one mighty swing after another, finally ripping off its head and ending the threat.

“Neither Godzilla nor Kong were ever going to lose,” says Borenstein when we ask if there was ever a version where one of the two stars didn’t walk away. “There were different moments of how far we took it in terms of Kong taking a beating, but the two of them were always going to gang back up and work together.”

During the film’s closing scenes, Godzilla and Kong essentially call a truce, and Godzilla swims back into the ocean. He leaves Kong free to return to Hollow Earth, where the last we see of him, he’s ruling over the underground world with as much benevolence as a giant gorilla can muster.

As the ending of the film hints–echoing a theme that has run through all four films in the MonsterVerse–humankind is simply powerless in the face of the Titans, and any attempts to create our own defense, such as Mechagodzilla, is likely to blow up in our faces due to our hubris.

At the same time, the Titans themselves must cast off their old grievances and recognize the necessity to co-exist in peace on the planet, with each other, and hopefully with us. It’s a simple message, but the metaphor of Kong and Godzilla as forces of nature that we must respect, while acknowledging that we can do little to control them, is relevant to the many crises facing the world today.

“They reveal to us the fact that we’re all connected,” says Borenstein about the themes embodied by the legendary monsters “Godzilla and Kong, creatures of this scale that can hop around the world and touch everyone haphazardly and create tumult and chaos, reveal that in our globalized world, we are all connected for better and for worse. To me, that’s really what this movie is kind of all about.”

And it goes without saying that when those two forces of nature get in the ring, it makes for one hell of battle, even before a third opponent joins them. Godzilla vs. Kong delivers on its title and then some.

Godzilla vs. Kong is now playing in theaters and streaming on HBO Max.